Sleek yet kitschy (they can coexist), this Newport newcomer serves imaginative comfort food in the Wayfinder Hotel.

The Wayfinder Hotel — which looks far more like a motel — is in disguise. Sitting on Admiral Kalbfus Highway, it stretches in squat fashion, horizontally, on a large asphalt parking lot. It looks, momentarily, like a bare-bones refuge for families traveling southward and who likely took a wrong turn. 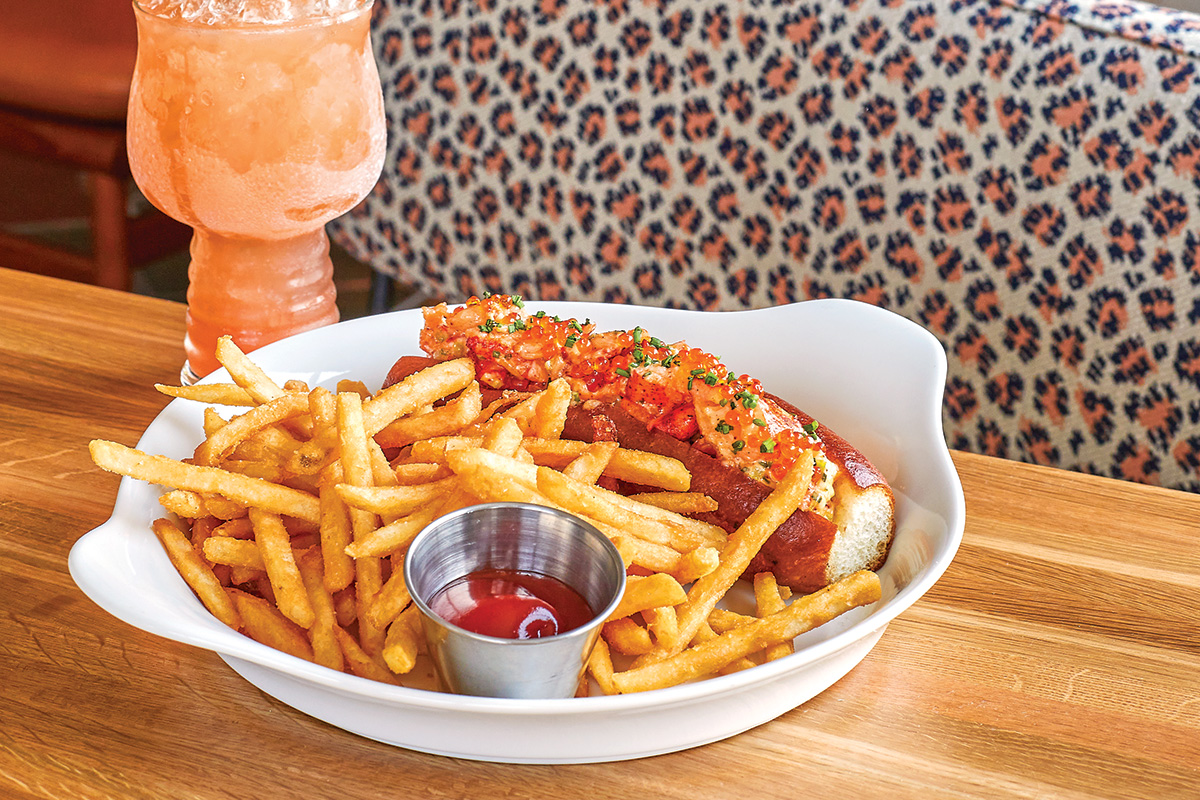 But there are clues that all is not as it appears. The first three spots in the humdrum parking lot are charging stations for electric cars. (Hmmmmm.) Chairs on the patio facing that same lot are just a bit too colorful, a tad too trendy, to be an afterthought. And the moniker, sitting atop the building in flamboyant retro typeface, suggests a style that’s anything but accidental.

One step into the lobby and the jig is entirely up. Inside is a merry mid-century explosion that centers around a mustard yellow firepit surrounded by sofas that attract twenty- and thirty-something guests after 8 p.m. for cocktails and conversation, many of them with a toddler or two around their ankles. The Wayfinder is kid- and pet-friendly to such a degree that guests without either seem anomalous or at least lonely.

But the hotel has something celebratory to offer, even for those solo travelers, and nowhere is it more evident than in its restaurant, Nomi Park. Owned by chefs Chad Hoffer and Tyler Burnley, as well as Anna Burnley — who already have TSK, Mission and Winner, Winner in their portfolio — it’s an unabashed homage to the HoJo days, when family pilgrimages in the station wagon were the highlight of summer. The restaurant looks like a scene from Ang Lee’s “The Ice Storm,” a collection of vignettes in which groups can gather in bright orange booths or cheetah-patterned benches. It’s a throwback for people too young to know the reference but who are living large just the same, against a backdrop of an orange and blue medley, a big old bar and an endless parade of cocktails. 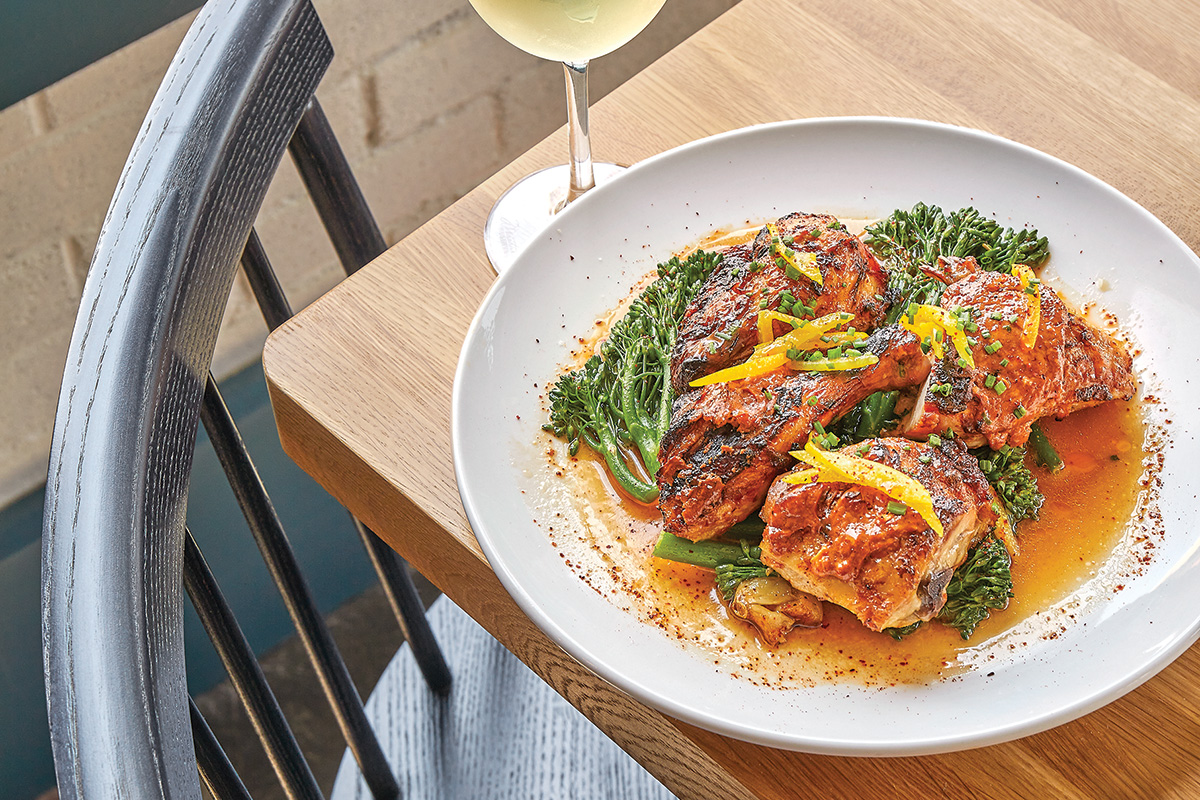 Nomi Park doesn’t feel anything like either incarnation of TSK. The interior bears some resemblance to Ogie’s Trailer Park but with an aggressively good menu. This, of course, is where Hoffer and Burnley come back into view. Howard Johnson’s didn’t have lofty culinary ambitions because their clientele wasn’t interested. But this team (and their following) walk the thin line between kitsch and complexity with dexterity. The menu is full of self-proclaimed comfort food and, in the wake of quaran-times, that’s a safe and welcome bet. But “comfort” doesn’t translate as staid; it’s a jumping-off point.

If the original family restaurants focused on fried fish and burgers, Nomi Park insists on molding that wet clay into a different shape. Starters may include a plate of poutine covered in chicken confit and light gravy that one diner declares, “the chicken a la king of my dreams.” Beef patties have been replaced by tartare ($18), coarsely chopped and coated in an egg-heavy gribiche with minced cornichons, a tangle of watercress and darkly grilled bread. (Few dishes have survived the ’70s with as much staying power as a good tartare and thank god for that.) 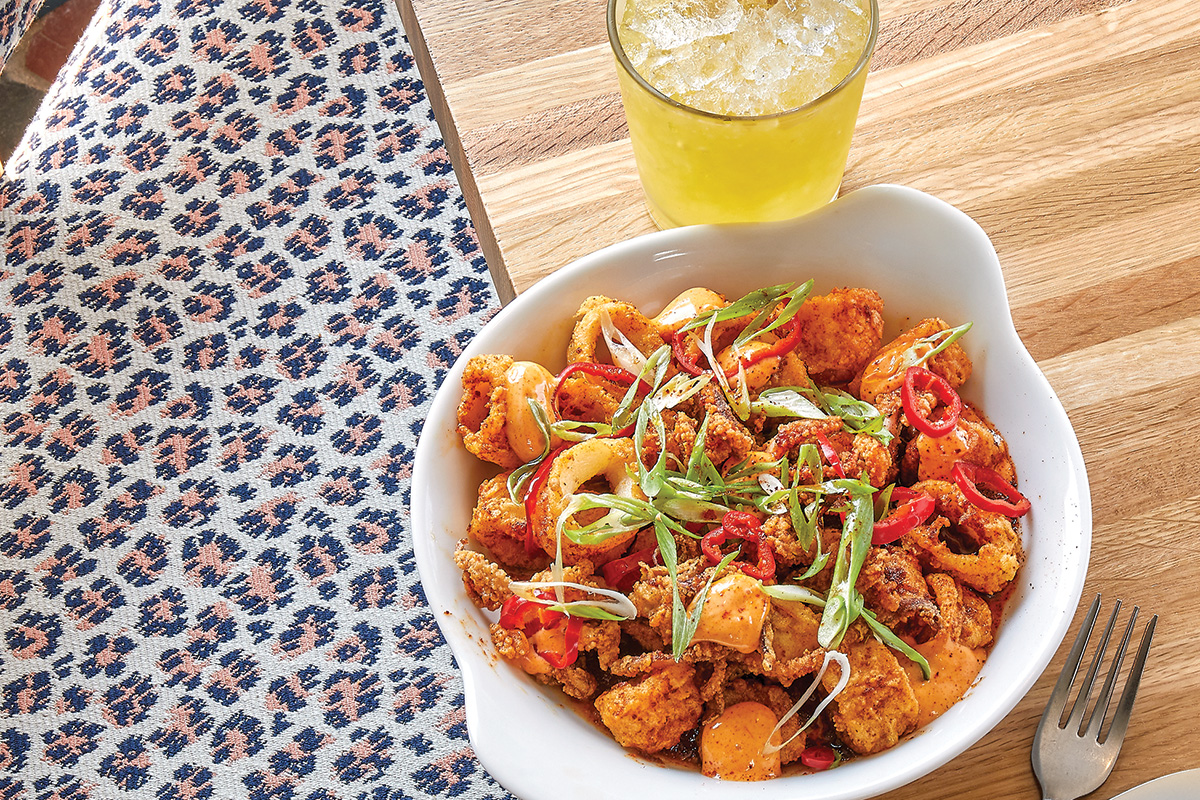 The most controversial dish is the calamari ($15), in which the kitchen swaps out banana peppers for little puffs of butter made with ’Nduja, a spreadable salami from Calabria. Even the servers confess to cajoling diners into giving it a shot but a college kid in the corner is game and shouts out that he loves old school calamari and loves this one more. In fact, the salty, spicy taste of salami is so good with fried squid that it should go mainstream. The full evolution to modernity, however, comes in a tender slice of fish: fluke crudo is plated like an Atomic starburst design ($15), dollops of date and avocado resting on a pool of grassy olive oil. Sweet and simple, it embodies the restaurant’s goals to get diners back to a time with less angst and more aspiration.

Entrees don’t stick quite as close to their progenitors but there’s still a recognizable current running through the menu. Chicken is roasted in harissa ($25) and draped with strips of candied lemon — too bold for toddlers, perhaps, but delicious. Burgers are a more linear interpretation but, covered in manchego cheese and arugula ($18), they are both reassuring and intriguing. Lobster salad is piled into a buttered bun but topped with trout roe for a bit of twenty-first century drama ($28). Fluke makes another appearance, seared and served with turnips and a bright citrus vinaigrette ($28), not quite fish and chips but the shock of lemon is there.

Even off the plate, Nomi Park is a pretty sunny place. Servers are young and move easily between serving drinks, running behind the espresso bar and asking a kid in pajamas where they might find a pair in their own size. Drinks are just a vehicle for conversation — “I totally bet you were a ‘Lit Juice’ guy! It’s so obvious!” — and that chatter, as trite as it may appear in the moment, has a profound impact on people still worried about being in public spaces. Who would have thought that going back fifty years might bring some stability to current events? 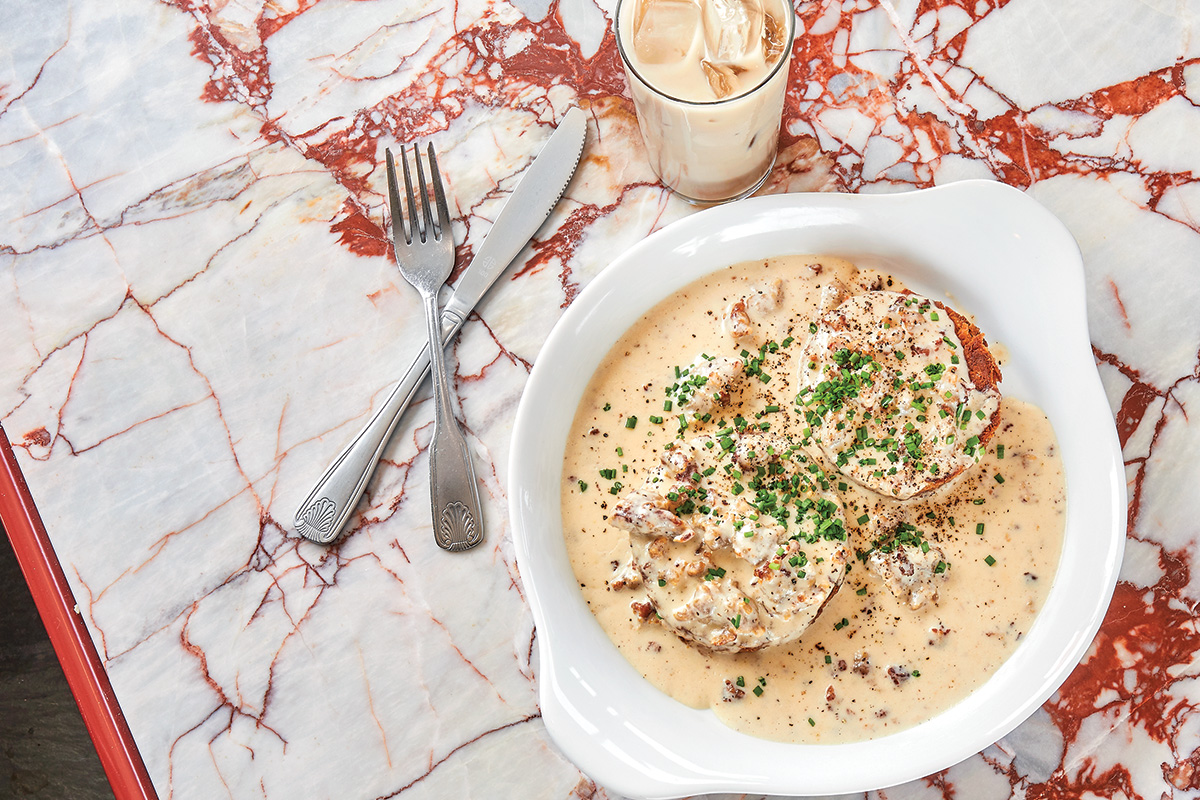 If the small talk fails, there’s always a plate of warm chocolate chip cookies sprinkled with salt or a deep glass of pot de creme to remind you of simpler days. There’s an ice cream sundae as well, though a thick puree of rhubarb and several meringues are enough to force a certain maturity into dessert time. All of them can be eaten while lounging, as many of the tables are low and surrounded by couches. It’s a bit like eating in a West Elm showroom on steroids though your grandmother’s crazy collectibles — carved wooden owls, amber glass jars, a ship in a bottle — are also scattered about to remind you of years past (even if your own past is long after the Pontiac GTO was on the road). The Wayfinder feels like a family slideshow but a welcome one tinged with revelry as well as memories. It may be sitting on a highway in a parking lot but it feels, with communal gratitude, a world away. 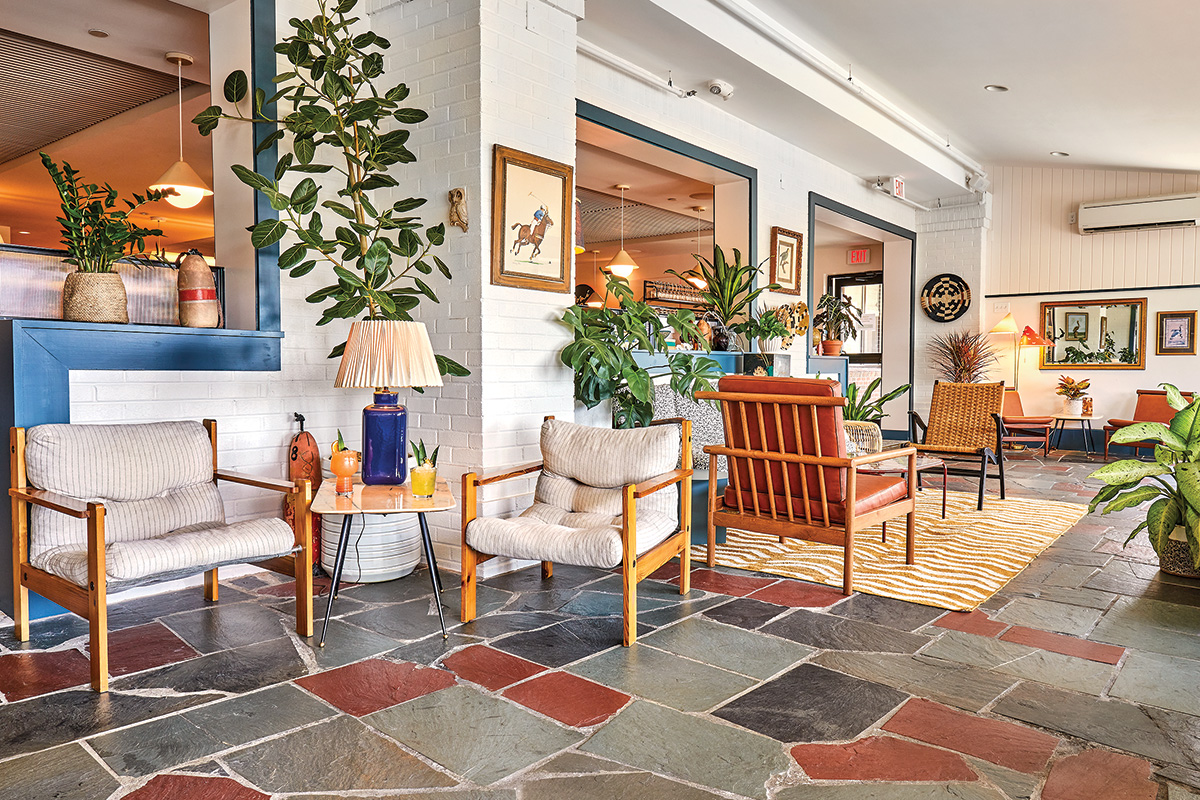