Even in the most austere setting, the food of India is enthralling. A British stew needs little more than stock, the French throw in some red wine, Hungarians a hefty dose of paprika — regardless of variable, braised meat remains a common culinary vernacular across the globe. But curry? Curry is nuanced. It’s an amalgam of leaves, pods and seeds that transforms everything in its wake, perfuming the air with olfactory rapture.

Chaska, however, is anything but austere. Sanjiv Dhar’s fourth restaurant (after Kabob and Curry, Rasoi and Rasa) is a Bollywood glitter bomb, awash in color and with the effervescent energy of a disco ball. The dining room is rainbow-hued: turquoise, red and yellow spill out in pillows, paint and intricate glassware. And alongside several massive portraits painted on newspaper, even the hostess, jewels circling her heavily decorated eyes, is a walking piece of art. The staff is young but deeply attentive — a fact that doesn’t go unnoticed by two men drinking turmeric-tinted cocktails whose entire conversation centers on how impressively well-trained the twenty-something staff is. 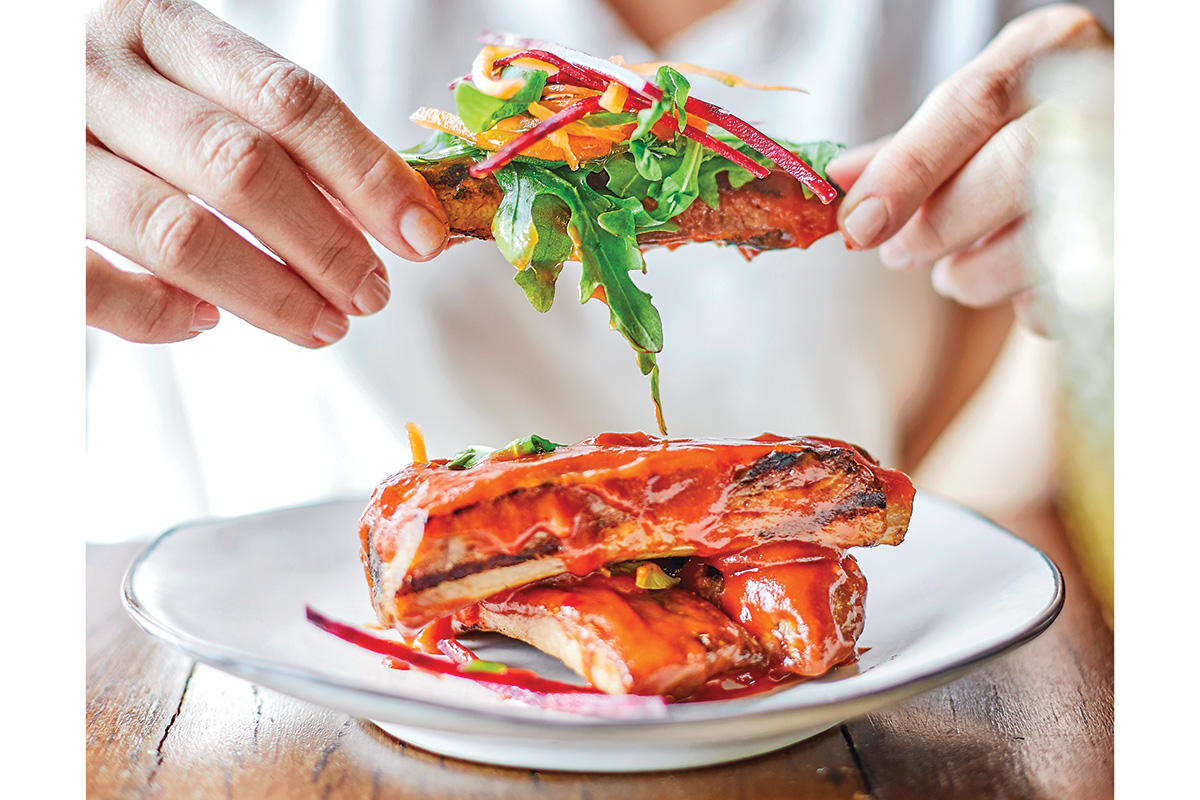 It might have something to do with Dhar, who often stands stoically by the kitchen overseeing operations. Or not — because Chaska has a performative quality all its own. A cook, entertaining the diners, pulls three-foot skewers of marinated chicken out of tandoors and sends naan flatbreads out on platters. The menu is often referred to as “fusion” by the staff but it’s a term that falls short of articulating a rich cuisine that is wholly traditional and simultaneously surprising. (If there’s any complaint from new diners it comes from those looking for the same plate of tikka masala that they’ve eaten every week, without variation.)

Chaska is party-centric and serves most dishes in smaller portions akin to shot glasses of Indian spice. Bright red, sticky Cauliflower 65 marinade has been converted into tangy chicken bites with mint sauce ($12), calamari is cooked with curry leaves and mustard seeds ($13) and brussels sprouts are roasted with coconut and lime ($11). If you’re lucky there’ll be a special such as lotus root on the menu as well — the world’s most decorative fried chips served with sweet chili and scallions.

Dishes are more interpretive than at Dhar’s other outposts, the menu playfully acknowledging American cuisine and reading it through a South Asian lens. You think pizza is only America’s adopted child? Cinnamon-spiced steak and madras masala seafood are right at home on doughy discs of naan ($14). But Chaska is always true to itself, the scales perennially tipping Indian culture. So while some dishes seem to suggest a culinary assimilation — pork ribs in chili sauce ($14), swordfish tacos ($14), chili cheese toast ($11) — everything eats like an Indian meal prepared from an international farmers market. 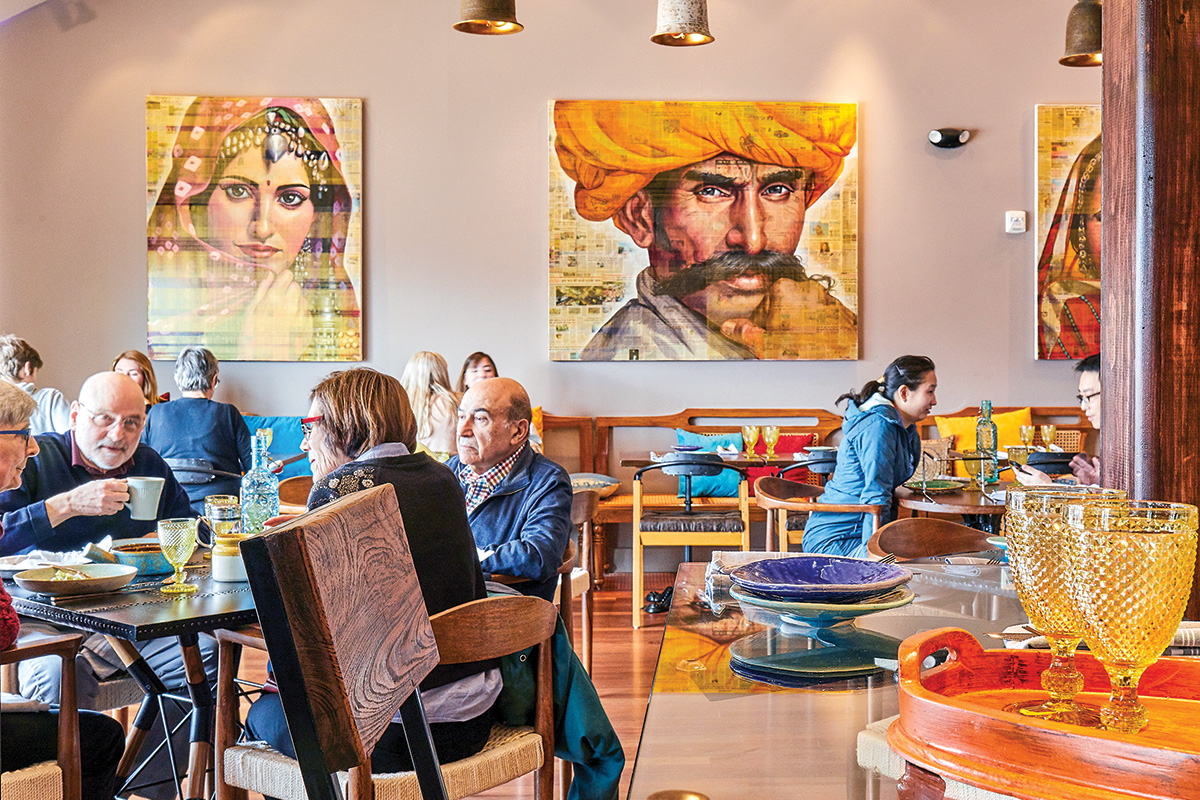 Cocktails are poured like nectar into ruby goblets and given monikers like Santosha (contentment), Tripti (satisfaction) and, the ultimate goal, Nirvana (liberation). Is it opportunistic to appeal to one’s soul when considering what to drink? Not here. There’s simply not a whiff of insincerity in this colorful bizarrerie of a restaurant: affection for food and community spills so regularly that each meal eats like a Whitman poem, overflowing with euphoria.

Servers walk gracefully around tables and, in barely more than a whisper, offer their “best wishes on your flavor journey” while pouring water out of ornate sky blue carafes. Even the bar — intricately carved and catering to a lucky dozen — is serious in its tranquility. Above the bottles are dozens of delicately cut glass vessels, massive pendant lights that conjure temple bells and shelves of pastel painted teapots. The lone television is often turned to nature documentaries that fill the corner with silent images of watchful frogs and densely soaked forest. Chaska opened under a ceremonious Hindu blessing and it glides through each evening in earnest pursuit of grace. 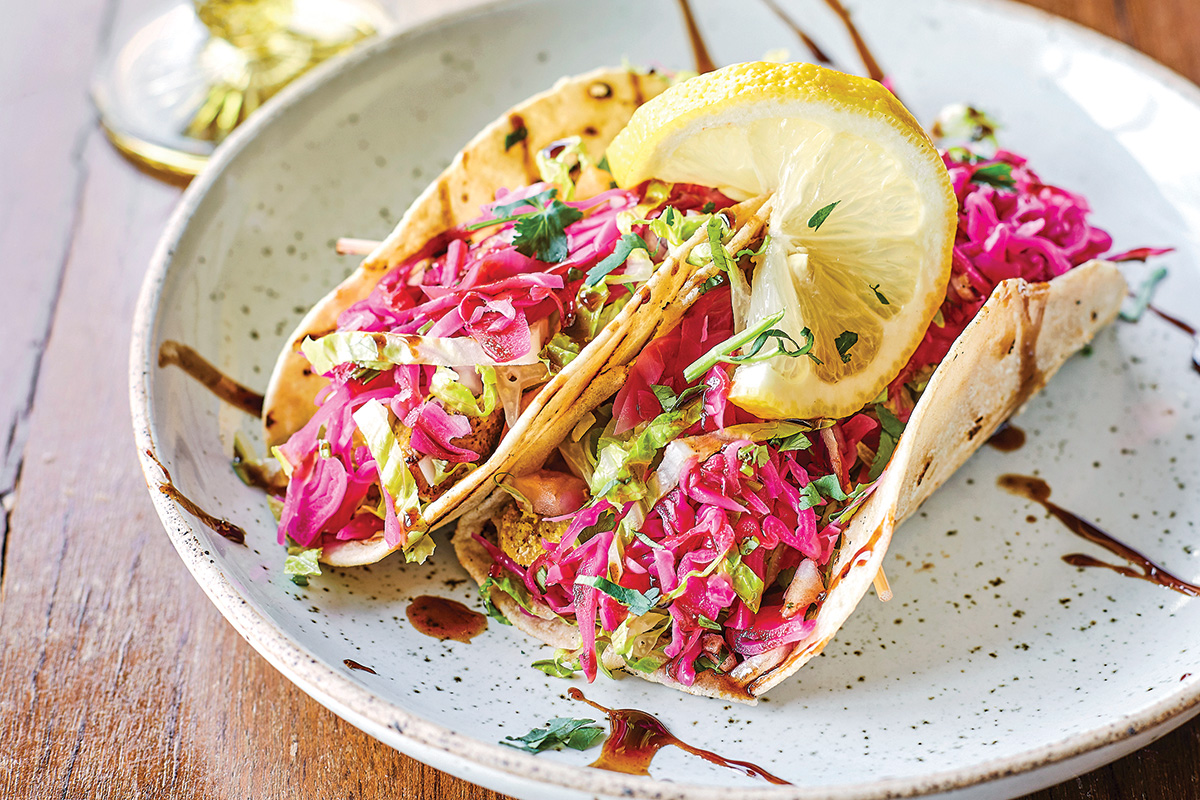 And that brings us back to the ubiquitous bowl of stew. The journey to nirvana is not a foreign one. We forge it every day in small increments, aided by the things that bring us comfort: a bowl of rice, a spiced tomato sauce, a bowl of chicken braised to its most tender form ($20). Chaska is so attuned to that daily passage, intent on proving that a departure — even in small doses — from the familiar will prove most enlightening. Chicken biryani, a special, is served in bowls with a dramatic dome of dough; avocado and sweet potato are molded into a sweet tamarind salad; and paneer is presented like a pan-seared cheesesteak with apricot chutney. It’s tradition revisited, reworked and revitalized to Eden-like perspectives.

If the staff is uniform in its youthful buoyancy, however, customers have no particular demographic other than being ardent fans of India. Toddlers chew on naan in highchairs, grandparents settle into high-tops with jackfruit tacos and couples spread through the room with their cocktails in obvious reverie. Of course, every celebration inevitably ends in sugar and Chaska offers a trinity of dairy-laden desserts ($8). Creme brulee is bright with an infusion of mango and red chili and cardamom cheesecake is sandwiched between two Parle-G biscuits (the Indian equivalent of arrowroot cookies). But the centerpiece is a cube of chocolate banana bread pudding drizzled in caramel — the very manifestation of comfort food in its finest form. 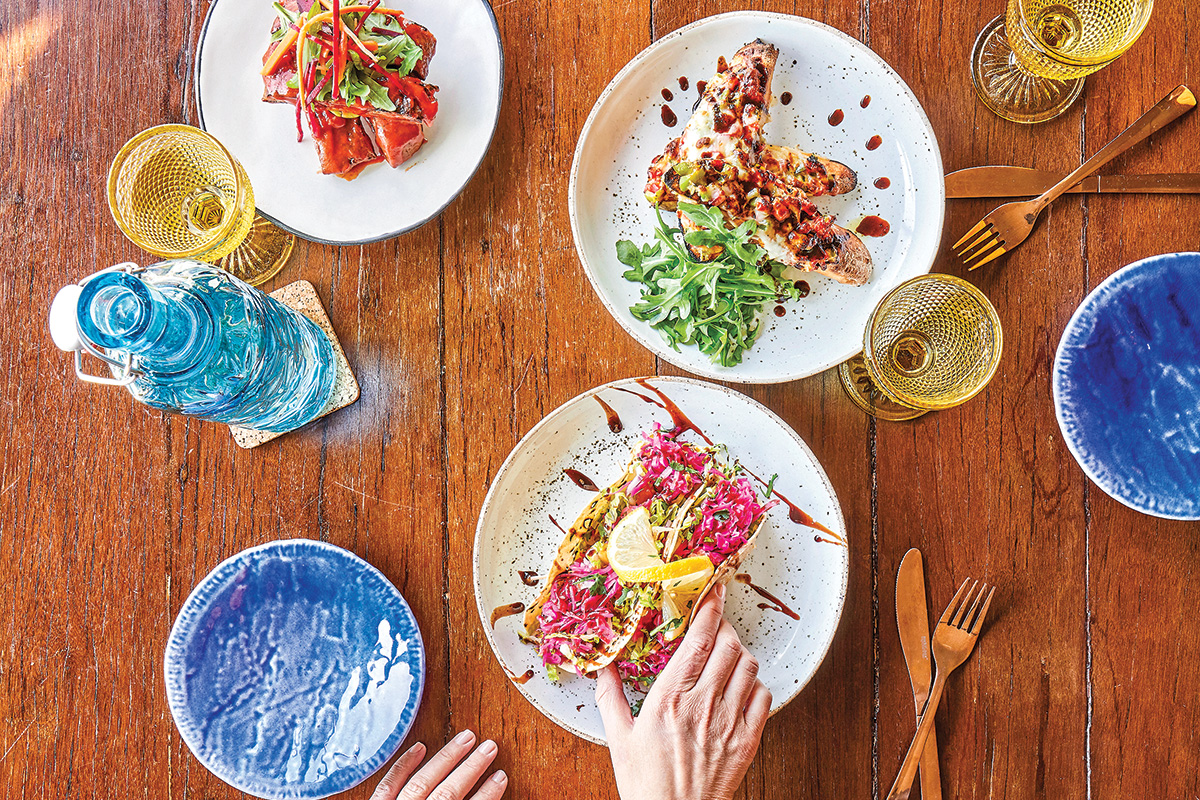 There may still be a few inadvertent wanderers, disappointed to find that Dhar hasn’t cloned his earlier establishments. Yet, inevitably, they too will be lured by the kitchen’s aggressively ebullient approach. More than twenty years ago, Kabob and Curry may have relied on the wanderlust of university students to incorporate Indian food into the daily vernacular of New England cuisine. But having long since secured a standing in the local culinary world, Dhar proves he’s keenly aware of the illimitable boundaries of Indian cuisine — and the invitation to hop a ride on the coattails of his vision is impossible to pass up.