These savory takeout options let us explore the world through our taste buds. 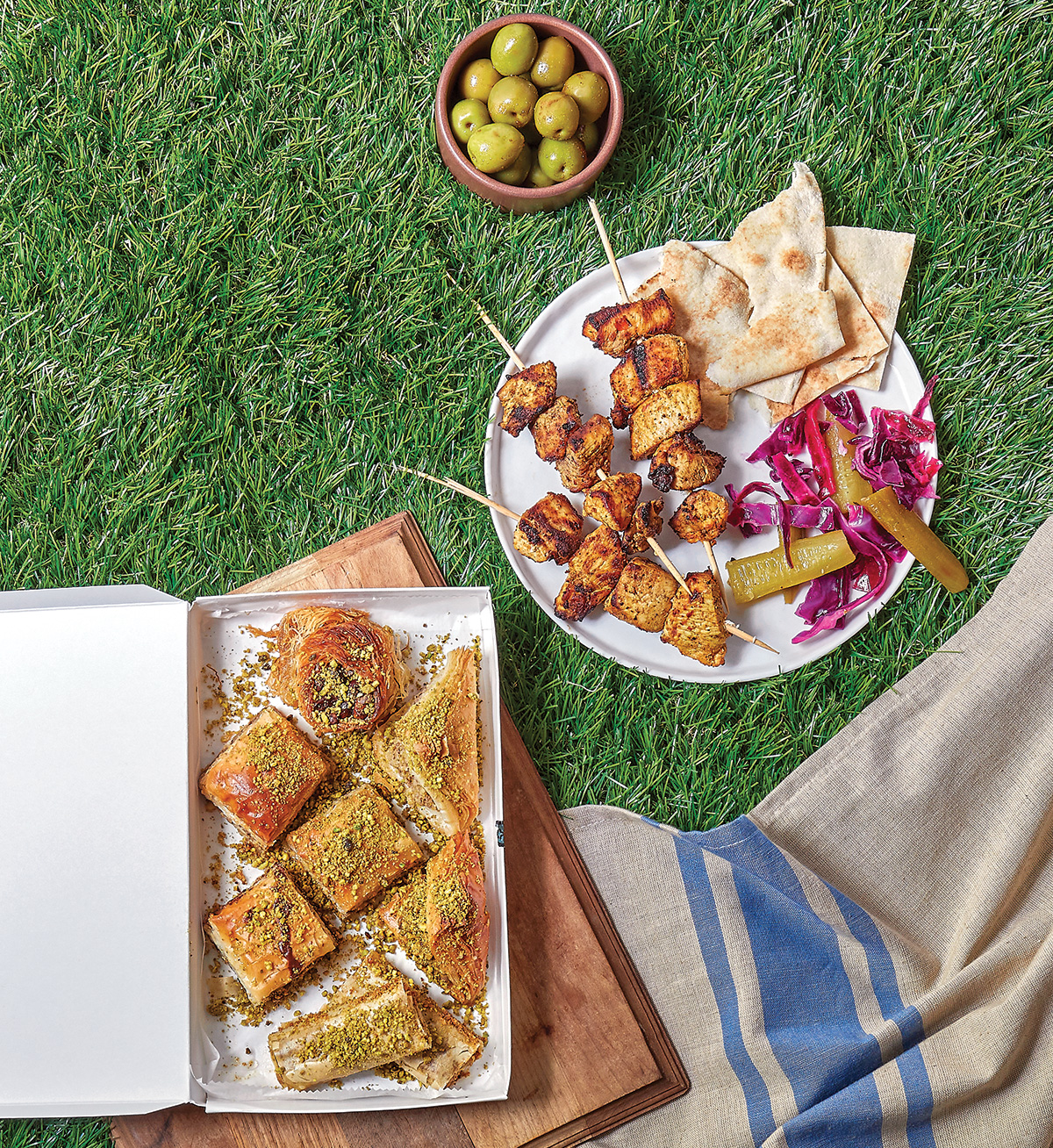 It’s a disappointment to get takeout from Aleppo Sweets — but only because the restaurant is so charming. Everything about the small space sparkles, from the copper tea kettles and glittering pendant lights to the prismatic windows tinged with hues of green foliage. Syria has faced nearly insurmountable struggles but, in this Aleppo, the romance of its culture is fully immersive. The scent of baklava, the sounds of Middle Eastern music, the awareness of how furtively this world needs to be protected: All of it is evident in the food, even when it’s packed in plastic.

Syrian ingredients are both earthy and light, an Edenesque exploration of agriculture. Meat is readily present, usually marinated and grilled, but even the most flavorful kebabs play second fiddle to vegetarian options. The house hummus is entirely smooth and almost smoky and an irresistible glue when you’re piling tabbouleh and labneh onto thin sheets of bread. Add in a plate of stuffed grape leaves, a bowl of baba ghanoush and a half-dozen fried falafel and you might swear off of American fast food forever. (It’s not any faster and the culinary comparison is shameful.)

And then there is fatayer. Technically, fatayer is a hand-pie in a variety of shapes, filled with ground beef, spinach or cheese. But owners, Youssef and Reem Akhtarini, form their dough into a pizza-like disc and slather it with za’atar (a savory sumac-centered spice blend) or Aleppo pepper which, like all the food here, lingers on the tongue like memory.

At its core, however, Aleppo Sweets defaults to its name: sweet in its translation of Syrian life and in its signature wedges of baklava. This is where Akhtarini earned his reputation and livelihood and people still appear on the sidewalk to gather up small ribboned boxes. For a dessert that often coats the teeth with sugar, Akhtarini shows restraint: his baklava sings of nuts and dark chocolate, a panoply of texture and stories from across the world. If Proust had his madeleines, Ives Street has this: a singular bite of a gorgeous, complicated life. If it wasn’t ours in the past, no matter; it has become a deeply moving experience shared by the community. And taking a bite as you stroll the street, or in the confines of your kitchen, alone, does nothing to dissipate the impression.

Curb appeal is not going to lure you into Chong Qing. The generic photos of composed stir-fry looming over Wickenden Street offer no glimpse of what lies in the kitchen — which turns out to be a visceral connection, not only to Chinese culinary heritage but also domestic life. No doubt America has its own evolving perception of what traditional Chinese cuisine is but indigenous dishes often go unnoticed in the international marketing pitch.

That’s where Chong Qing comes in. The restaurant is not concerned with American standards nearly as much as it is with recreating a Sichuan home in the Ocean State. Even packed into homogeneous takeout containers, these are dishes that surprise with spice, heat and texture. There are plenty of doughy dumplings and noodles for those tied to the familiar but so much lies outside the expected. Hand pulled noodles are intensely chewy and laden with cumin-scented slices of beef, redolent of a Far East palate that extends miles outside of China. But the most compelling dishes are homey and hearth-bound.

The combination of tomato with eggs may not be particular to any culture but its execution is. Stir-fried with a hint of fragrant sesame oil, Shaoxing wine and sugar, this is the diner food of your dreams from halfway around the world. Mixed with a plate of sour spicy shredded potatoes and you begin to see where continental cuisine has poached its favorite dishes. This is an omelet and hash brown extravaganza accented with black vinegar and chili peppers. It’s an anomalous experience for anyone who didn’t grow up eating traditional Chinese food — simultaneously far-flung and entirely familiar. Even garlic-scented pea shoots evoke collard greens from the American South, each bite a lesson in how cultures connect over oceans.

That’s not to say, however, that Chong Qing doesn’t have an unpredictable side. Kidneys, tripe and chicken gizzards find their way into the wok quite often, but always as a vehicle for acid and spice. Even the desserts are an amalgam of sweet and savory: Snow mushrooms with rock sugar and a syrupy green bean soup serve to reimagine what vegetables are capable of. But the best part of the journey is the realization that a trip abroad is just as much an exploration of home. 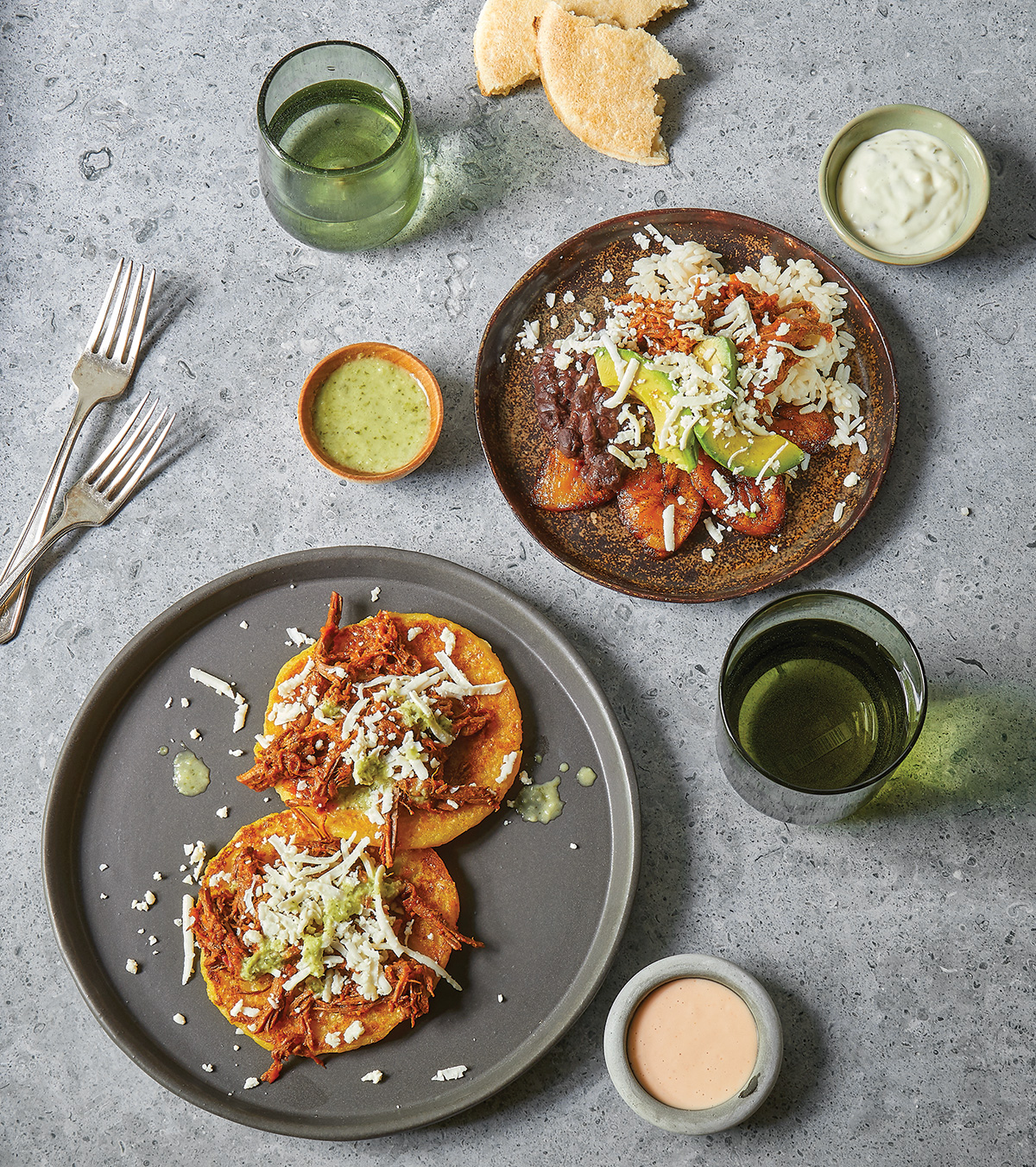 he irony of La Arepa is that, as its home country falls deeper into chaos, this small restaurant translates its culinary heritage with increasing clarity. As with Chong Qing, this is a kitchen far from its origins and the goal is to create a moveable feast that tethers expats to their roots. Mission accomplished.

The minute restaurant is named for a handheld pocket sandwich made of cornmeal dough and stuffed with braised meat or black beans. It makes sense, given the portability of the arepa; it translates Venezuelan culture on the run and in a single bite. As with many native dishes, it’s an amalgam of starch and protein though often punctuated with unctuous slices of avocado — a fruit that has increasingly become a luxury in Caracas and beyond. Even better, however, is the cachapa, an amped up version of a corn cake that requires a knife and fork and your undivided attention. Cachapas are sweet griddle cakes that, in their simplest form, need nothing more than a sprinkling of queso and some sour cream, akin to Southern cornbread in its most decadent dairy rendition. But it’s the combination of sweet corn and stewed chicken that stands for every international throwdown version of meat and dumplings. There’s a reason we gravitate toward comfort food. Modernism may push our boundaries but these are the dishes that validate our childhood, regardless of where it unfurled.

But the supporting actor for every dish at La Arepa begins with the humble plantain, a starch with two distinct personalities. Sliced green plantains are smashed, fried and served with sofrito, a sauteed blend of onions, garlic, green peppers, celery and sweet habaneros. (The sauce, which is saturated with cilantro, is the base of myriad dishes and the sweet, sharp flavor becomes sentimental for anyone obsessed with patacones.) But tajadas — sweet, ripe plantains — are the archetypal comfort food, the dish you offer to the pickiest eater arriving on your doorstep from some distant land. They’re akin to a slice of New York pizza or a spoonful of Nutella — a ubiquitous treat that’s impossible to dislike.

In fact, La Arepa has a significant sweet tooth, ending every meal with a dessert that doubles down. Torta de tres leches is soaked through with condensed milk but it still seems savory next to a slice of bienmesabe — a cake covered in egg-rich coconut cream, rum, sherry and meringue. It’s an unabashed paean to sugar and, if you close your eyes, you’ll hear the folksy sounds of gaita playing in the background as you reach for your second slice.