We honor Rhode Island businesses of all sizes that inspire philanthropy in their employees around the state.

We’re excited to once again partner with the Rhode Island Foundation in presenting the fourth annual Common Good Awards. This program recognizes Rhode Island businesses of all sizes that inspire philanthropy in their employees around the state, not by writing a check to a worthy cause, but by encouraging staff to go into the community and help. These companies also take it a step further, offering employees incentives including paid time off and making donations to charity.

During this year of COVID-19, however, we pivoted and asked businesses to tell us how they innovated during the pandemic and how they helped the community during the crisis. The judges were impressed by the many different projects that were submitted for consideration: “They went above and beyond” was a common reaction. So, congratulations to the companies recognized here, and a major vote of thanks to everyone who participated. Rhode Island is a better place because of your involvement.

On January 14, tune in to hear from the 2021 winners about their hard work and accomplishments, along with a few words from our partner, the Rhode Island Foundation, about what the awards program means to them.

Did you know? Job Lot opened its first store on Route 1 in North Kingstown in 1977 and rang up $78 in sales the first day. 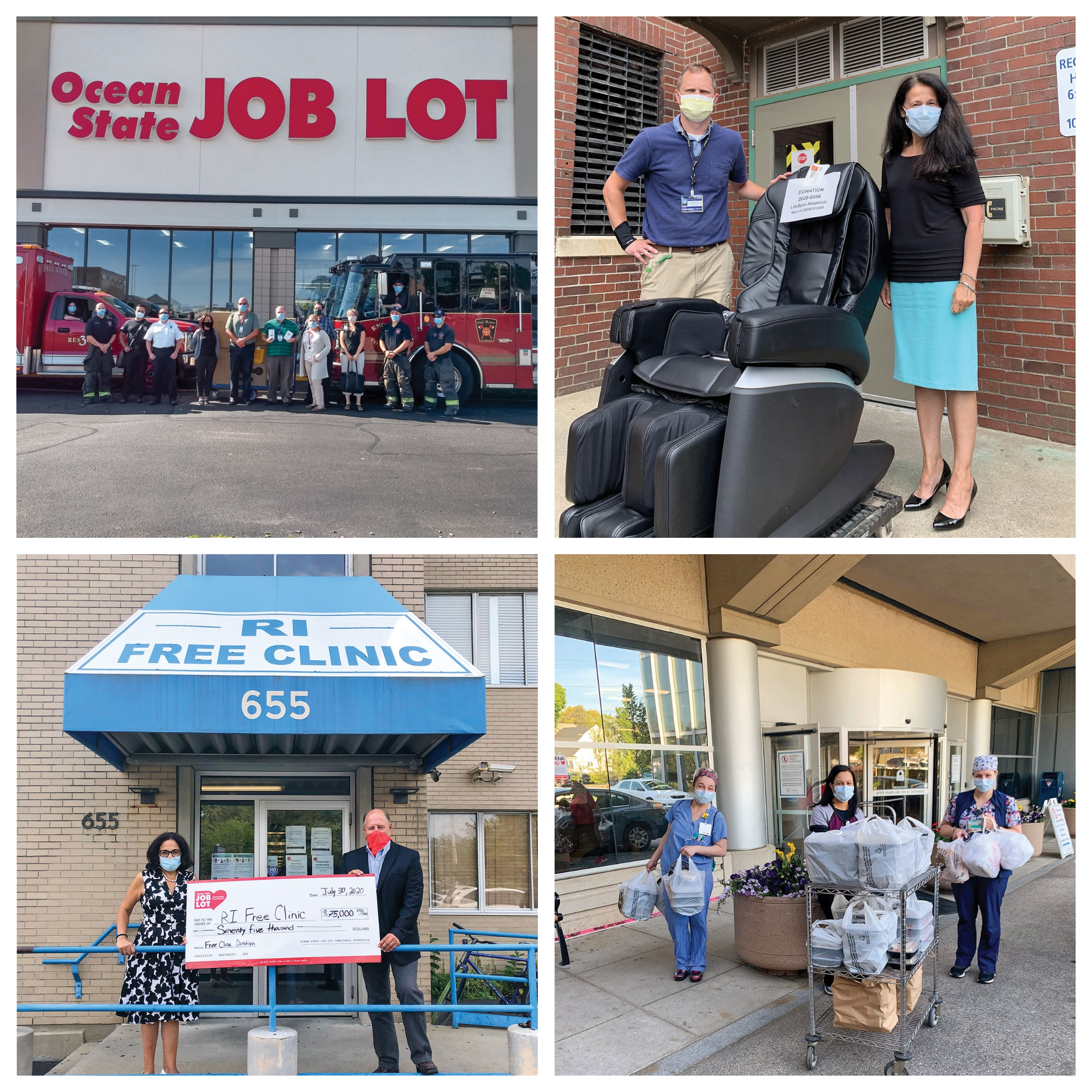 Most people recognize Job Lot’s trucks with its chatty green frogs rumbling up the highway delivering leaf bags, trash cans, even exotic cooking spices to the company’s more than 140 stores.

What’s less familiar, though, is Job Lot’s long history of supporting the community, which this year went into high gear. Case in point: Job Lot’s Mask for Free campaign, which supplied enough fabric, gratis, to customers to fashion nearly two million homemade masks at a time when face coverings were a scarce commodity.

Job Lot also distributed more than 550,000 surgical face masks to frontliners fighting COVID, including 200 to each police and fire department in the communities where its stores are located.

And using its global supply chain, the company sourced critical supplies including masks, gloves and sanitizers that were immediately donated to hospitals, first responders and others, and contributed $250,000 to these critical items. These initiatives and more garnered enthusiastic bravos from the judges: “For being a Rhode Island staple, they don’t promote a lot of their philanthropy,” said one. “They used COVID as an opportunity to respond to a call for help” and “They had products that everyone needed and gave so much away,” said another. Job Lot’s philosophy of community support is a cornerstone of its operations and the jurors wholeheartedly agreed.

Did you know? Falvey Insurance was launched in 1995 with just two employees; today they number ninety-four. 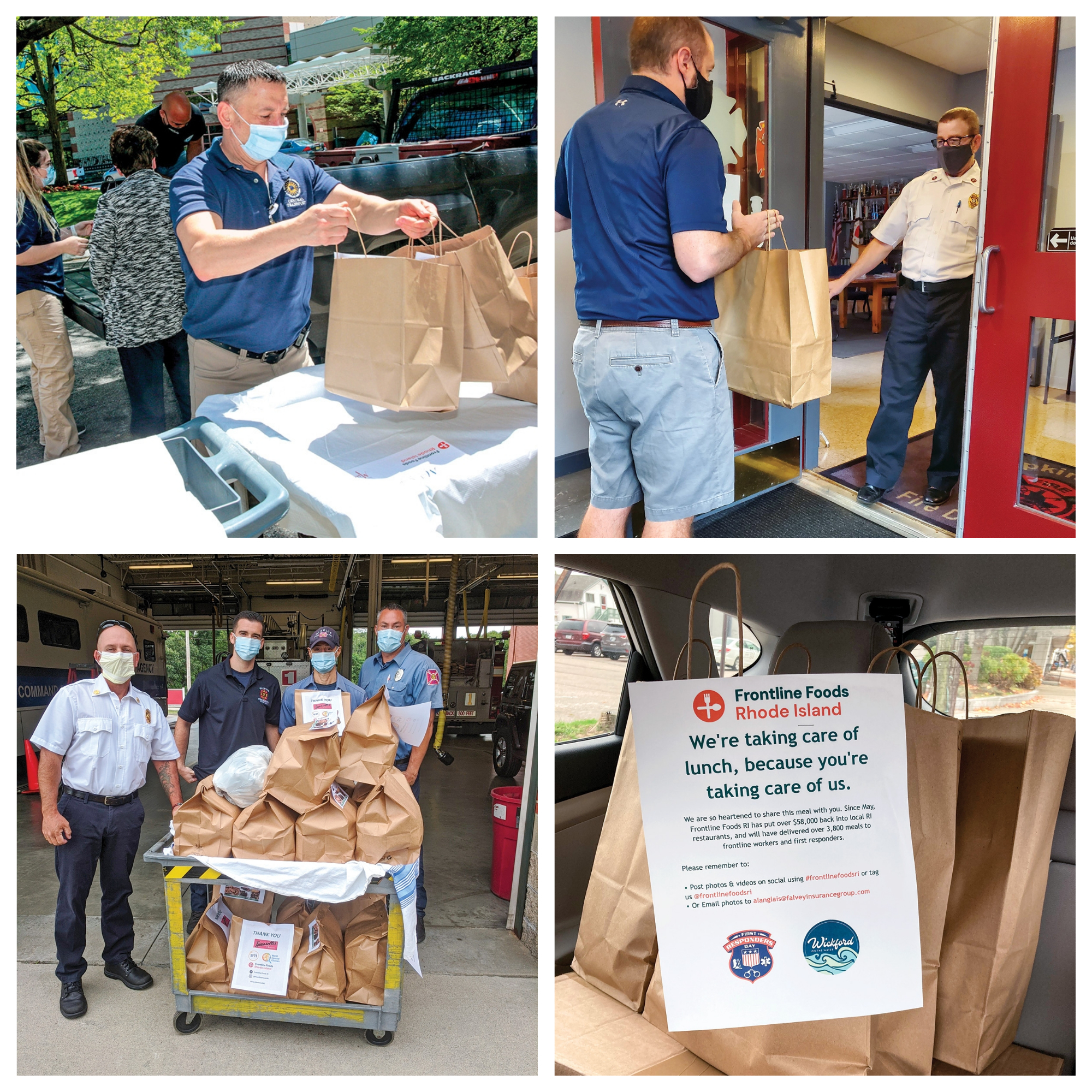 Falvey Insurance’s response to the pandemic captures the essence of the Common Good awards. When the crisis hit last spring, instead of a large corporate donation, the company’s CEO opted to give each staff member $850 to complete an individual challenge. Employees divvied up their donations among frontline workers, those in need of groceries, local restaurants and, more recently, causes fighting social or racial injustice. A few staffers banded together to form a local chapter of Frontline Foods, an initiative that supports area restaurants affected by quarantine restrictions as well as feeding frontline health care workers.

The judges praised the company’s approach. “I think when you give your employees the choice of where money is given, it really has a greater impact,” said one. “They blew everything else out the water,” said another. “I like that they had the ‘challenges’ in place.”

Did you know? The brewery’s name comes from the gray sails visible on the horizon to any South County beachgoer. 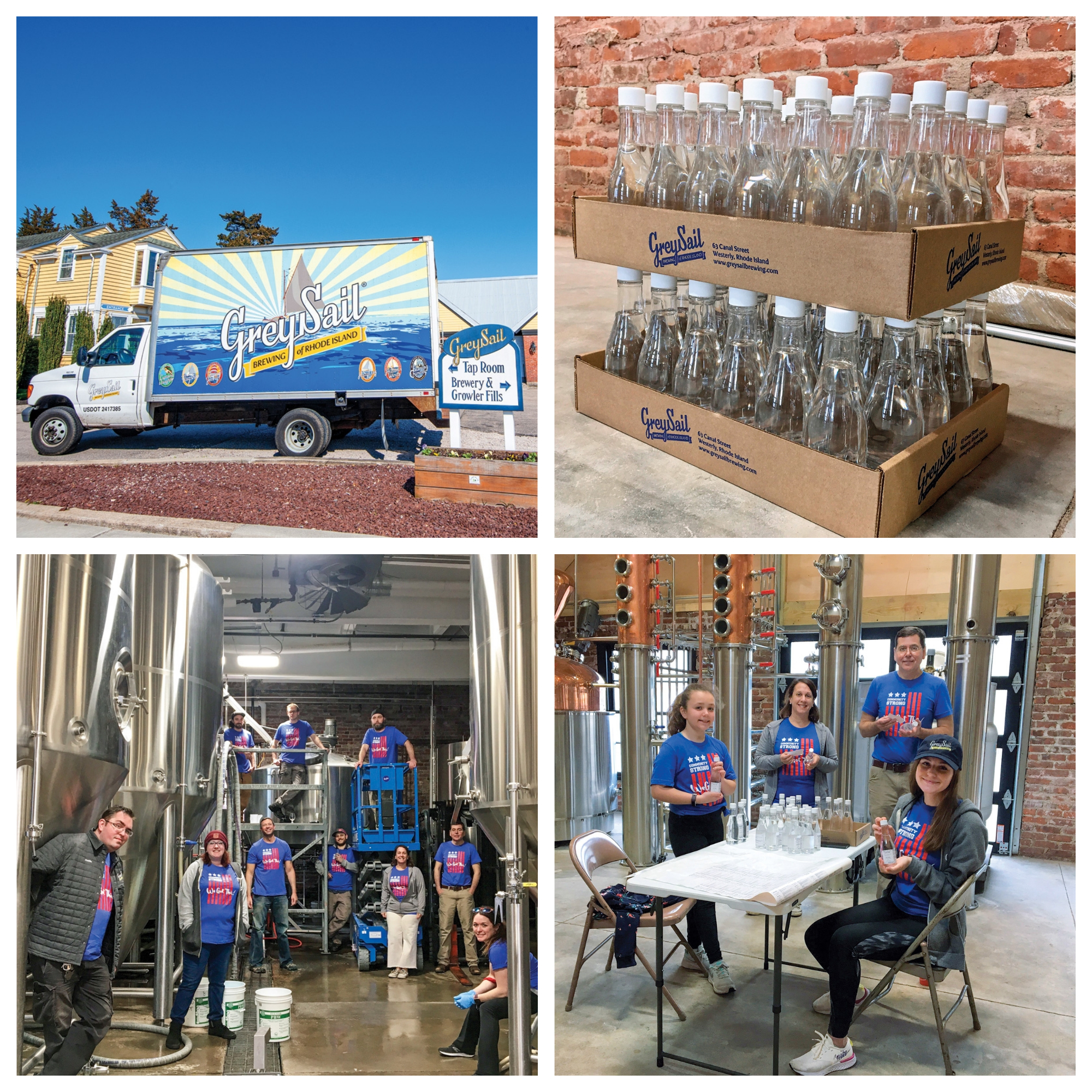 Visitors to Grey Sail’s tasting room may recall buying fresh pasta here during its former life, when the building was home to the original Westerly Macaroni Factory.

For the last ten years, however, Grey Sail has been brewing up batches of craft beer with evocative names such as Pour Judgement and Flying Jenny in the squat building overlooking the Pawcatuck River.

When the pandemic hit, the brewery staff recognized a critical need and responded with an out-of-the-box idea. After researching the World Health Organization’s formula, they retooled the equipment and produced more than 15,000 gallons of hand sanitizer and distributed it free in two-ounce bottles to first responders, hospitals and small businesses in the area. The company also donated $1,000 to the Ocean Community Chamber of Commerce (OCCC) to help pay for personal protective equipment for small businesses, and free masks to the public.

“Their fast acting and generous actions helped keep our community safe,” wrote one nominator, Lisa Konicki of the OCCC.
Fellow nominator, Tony Vellucci of the Frank Olean Center, agreed. “Rather than move on a new line of beverages, they chose to use the alcohol to make hand sanitizer and were extremely generous and quite unselfish in helping those in need.”

The judges confirmed those sentiments: “It’s amazing to see an applicant already affected by the pandemic do so much for nonprofits and the community.”

Did you know? Angela Rotondo took the plunge in November 2019 and left the corporate world after fifteen years to debut her flower business. 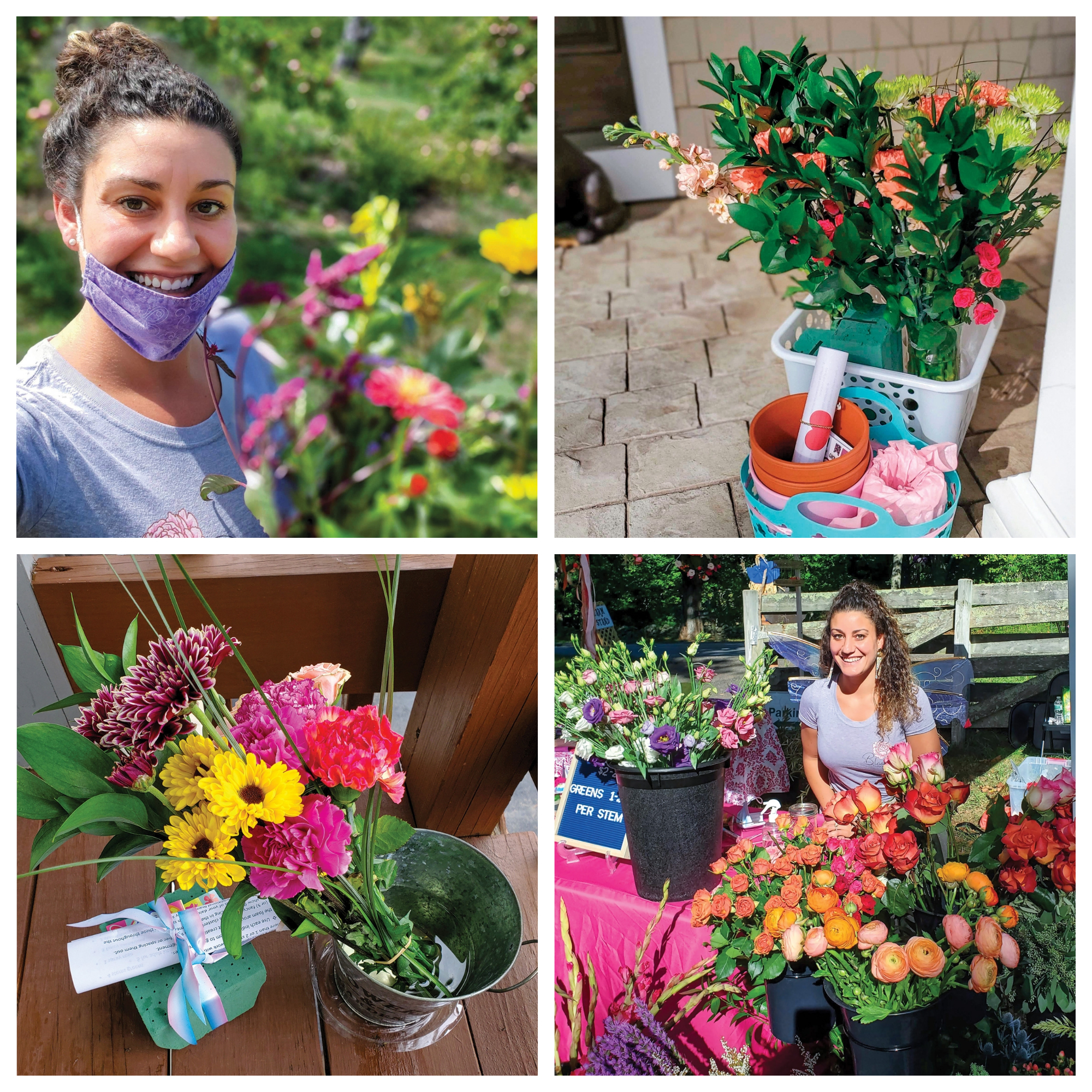 As both boss and solo employee, Angela Rotondo had her hands full just keeping her new floral design business afloat during the shutdown. She also knows that beautiful flowers can lift spirits like nothing else. She realized she had to retool her approach to survive, she says, but she also wanted to continue to bring joy to the community. “What better way than to promote positivity and give kids, elders and parents something to do while inside,” Rotondo says.

Rotondo devoted up to six hours a day delivering low-cost DIY flower kits for adults and kids, teaching kiddos new skills, promoting gardening as a hobby and helping harried parents in search of new homeschooling ideas. She also recognized that local nonprofits were being stretched by clients’ needs so Bloom Back donated a $75 gift certificate to Good Neighbors Soup Kitchen for a holiday centerpiece as part of the food pantry’s anniversary celebration. And coming full circle, she volunteered in the Scituate Community Garden’s vegetable garden, which supplies local food kitchens. It helps Bloom Back complement and serve the communities it serves, she says.

The Common Good judges applauded Rotondo’s work, “even more since she’s a one-woman band,” said one. Another noted, “Flowers are a ‘nice to have’ but not a ‘need to have,’ so it’s a real boost of something positive during this time.” 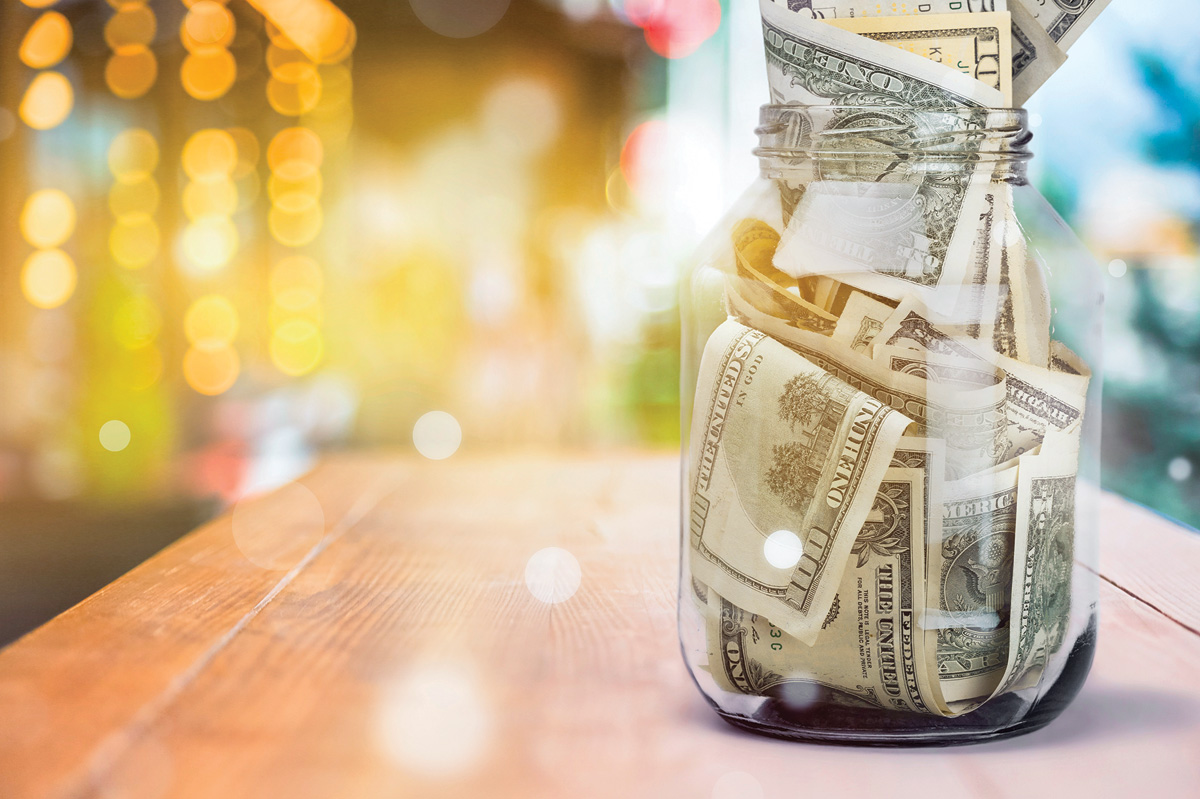 The judges hailed What’s Up Newp: “The virtual tip jars for musicians and bartenders as well as the virtual concerts by musicians are a provocative reminder that the local arts community also needs support during the crisis.”