Comedy is Making a Comeback in Rhode Island

They say laughter is the best medicine, and we're in for a hefty dose: Comedy clubs and improv venues are more popular than ever. 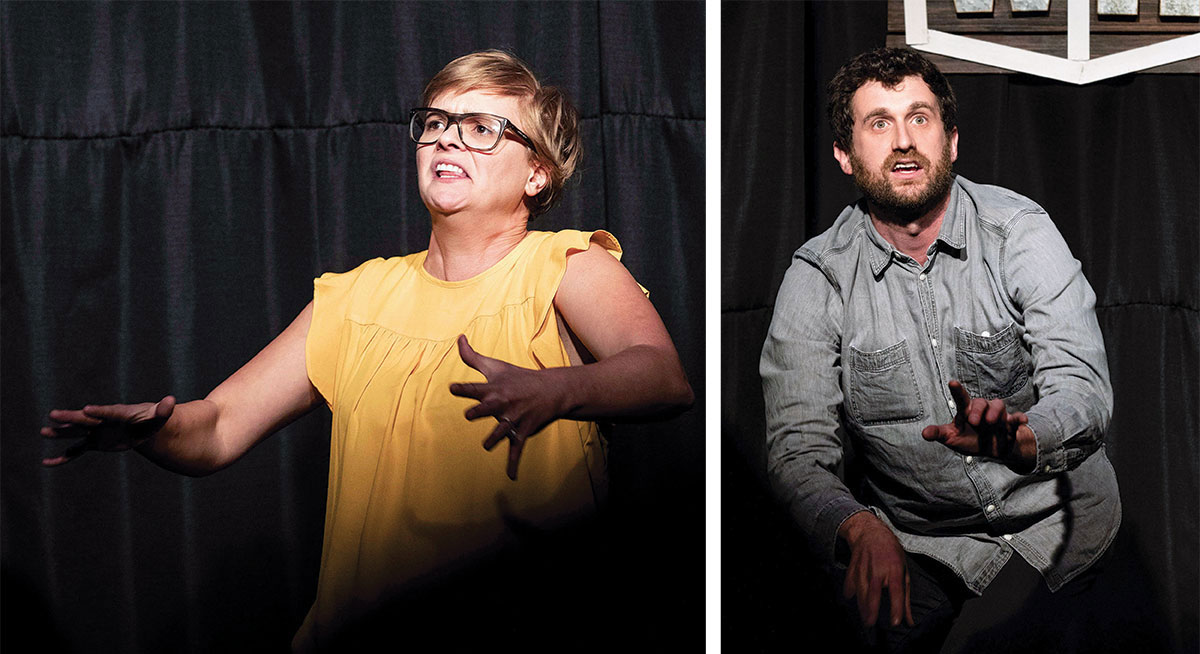 The popularity of live comedy has had its ups and downs, beginning its ascendancy in the ’50s and ’60s with witty, neurotic performers like Mike Nichols and Elaine May, and the button-downed brain of Bob Newhart. By the ’70s, it was gathering momentum, and by the ’80s, stand up was king; Jerry Seinfeld’s NBC show, with its breakthrough opening and closing monologues that were modeled after his club act, debuted in 1988. In the ’90s, the coaster careened downward but recovered with the current boom kicking in by the early 2000s.

Nowadays, with so many public platforms to make a funny where there was none before, the old joke that everyone is a comedian is a reality.

“It’s a zombie invasion; we’re being overrun,” cracks comic Rockin’ Joe Hebert. “Comedians are everywhere, I had three in my yard today I had to chase away.” The reason, he and other comics tell me, is “Netflix, comedy specials, Comedy Central, web series, podcasts, YouTube. Kids watching this stuff, they want to do it, so it seems like everyone’s jumping in.” And with that kind of exposure, audiences are becoming more familiar with the acts they like and who they want to see on stage.

Comedy clubs have also retooled their business models to boost audience numbers, morphing from traditional performance spaces to venues that may also include a restaurant, like Pub on Park, which also offers skeeball and karaoke, or Wage House, which has improv classes and workshops.

Plus, there’s the undeniable fact that this part of the country offers fertile growing conditions for the acerbically funny. “New England is a breeding ground for comedians,” Jay Leno has said of his home turf, “at least the ones with the most original thinking. It’s just the funniest place to be.”

One positive change in the comedy landscape is the uptick in women doing stand-up. Doreen Collins is a long-time comic and the first and only Rhode Island Hall of Fame “inductee of the female persuasion,” she says with a laugh. She’s done comedy her whole life and had three shows on Channel 10 over the years. Nowadays, she also promotes and produces female comedy shows.

“When I was a male comic, I had more work,” she jokes about being a female in a man’s world of comedy. “It’s not that we’re not funny, but we have to pass other tests. You can’t be too pretty; we’re judged differently from male comics, by the audience, even ourselves.”

And, she sighs, if a female comic comes on too strong and is a take-charge person, “You can get labeled a bitch.”

Kristy Nelson of Fall River has been doing comedy less than three years, and in the real world works at a car dealership and as a waitress. She credits the Comedy Factory’s John Perrotta for boosting the visibility of female comics.
“He’s the first person who actually booked me,” says Nelson, who’s worked the Comedy Connection, local bars and restaurants and venues in New York City. “People call him one of the scene’s godfathers of comedy. He gives a lot of us a shot who might not have gotten the work.”

Logan, the vet tech, says the field is getting better for women. “It’s still tough,” she says, “but hopefully we can change that.”

The scene is growing, she says, in part because people are starting their own events like the open-mic night she’s created on Wednesday nights at Wickenden Pub on Providence’s East Side.
“Having new comics is more competition but it pushes you,” Logan says. Newbies aren’t funny right out of the box. “They may suck in the beginning, but they get better. Some are painful, sure, but if you’re willing to be that brave to get up there, you deserve a chance.”

Keith Munslow founded the Empire Review and its comedy troupe, the Sparkling Beatniks, in 2006 at AS220, which stages original comedy sketches once a month and guest acts to showcase local talent.
“We’ve found a lot of things that work and don’t work, and have developed a way of doing things that makes it possible to create a wholly new show every month in just four, three-hour rehearsals,” he says of one of the longest running sketch comedy entities in the state.

One packed audience in October sees original skits including a human dressed like a pigeon who apologizes for soiling someone’s suit; another about an aging vampire/actor not getting roles because he’s “long in the tooth,” and a hilarious rap song, “Unexpected Money,” about finding a forgotten $10 bill in an old coat. The crowd eats it up.

They do musicals; by far the most popular has been “Benny’s: The Musical,” based on the defunct and much beloved Rhode Island automotive store chain. The shows sold out, longtime stage manager and producer Nicky Mariani says, “the second word got out it was being written.”

It had a very successful run of five shows, and if you missed it, stay tuned, she says: “I don’t think we’ve seen the last of it.”

Ben smith is a twenty-six-year-old Block Island native, giving the comic-by-night, salesman-by-day a lot of material when performing locally, with gags like “My high school class was so small, I could’ve been the king and the queen.”

This night, he’s hosting Barrel of Laughs, a comedy show held at Newport Vineyards four times a year that features local comics and a headliner, usually from New York. This time it’s Brendan Eyre, who’s been on “Late Night with Seth Myers” and the Comedy Channel. Eyre does a solid hour of nonstop laughs and picks on Newport’s wealthy persona.

“I know someone here is the richest (expletive) in the room. Is it you?” he says, pointing to a guy in front who admits owning four boats. “I knew it!” Eyre roars.

For his part, Smith riffs on his pale skin: “I’m so white, I did one of those mail-in DNA tests and they sent back a bottle of sunscreen and a lacrosse stick.”

Like many comics, Smith’s inspiration comes from a dark place. In 2013, his twin brother, Gregor, died of a drug overdose on Block Island. In 2014, Ben took the stage to tell jokes. He’d always wanted to. He just never had the courage to try.

“My brother’s passing reminded me how limited our time can be. You gotta go for it, pursue whatever it is you want to do,” Smith says. “It was like a defense mechanism for me. I turned what I was going through and channeled it into humor.”

Because of tragedy, he says, “it’s been like a gift to have the strength to do this.”

Growing up on Block Island, “you needed imagination to get through the winter,” he says, “so I’d write jokes on Post-it notes. I never thought to share them.

“After my brother passed, I went on stage. The result was people laughing.”

After my set at pub on Park, Perrotta is complimentary, saying I did very well. That is humbling. But more so is something Smith says as we discuss his brother’s death and how it brought him to what he loves doing most: making people laugh.

Smith hosted four shows in 2018 on the Block, the last on Columbus Day for 220 people, a great crowd by any standard, massive for Block Island in the off-season.

“A lot were friends of mine, friends of my brother’s,” Smith says. “It was a nice communal thing to provide laughter to the community.”

Getting laughter is great. But the gift of giving laughter, it seems, may be the best medicine of all. 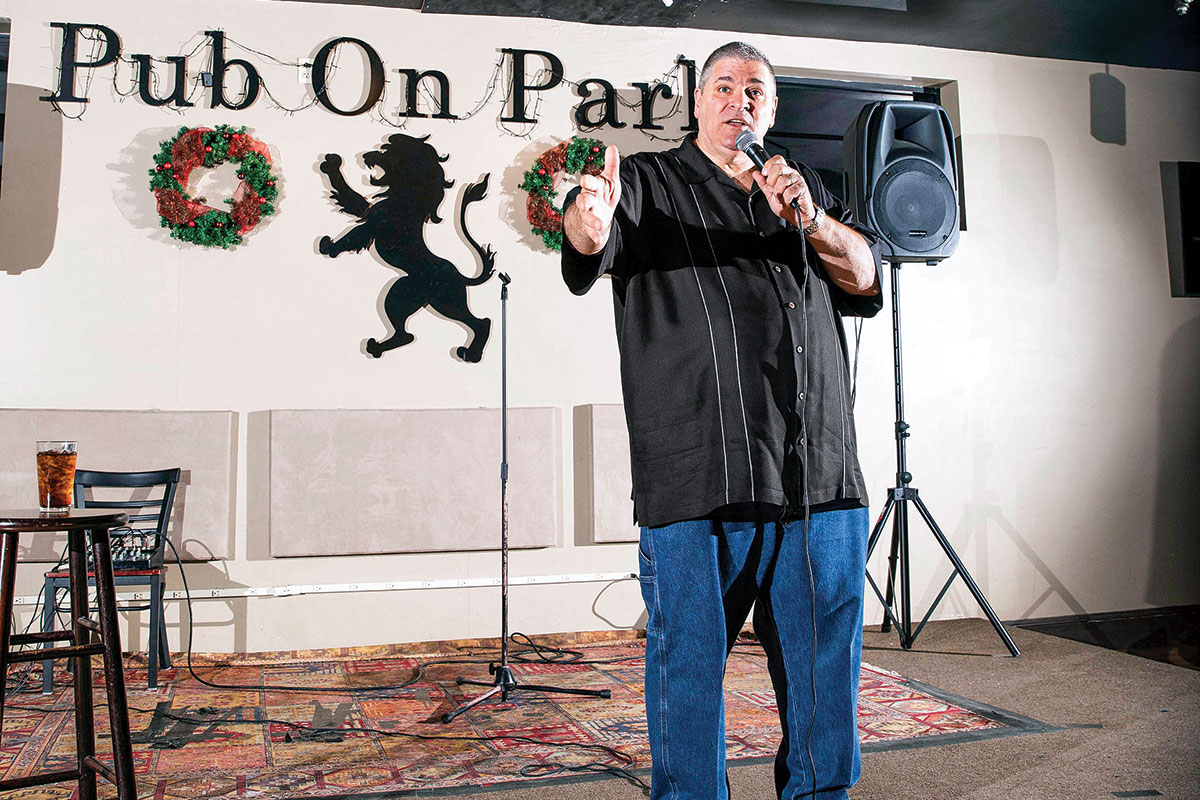 Rhode Island has a long list of comedy godfathers — guys (for the most part) who’ve been in the business for decades, like Frank O’Donnell, the Ocean State Follies’ Charlie Hall and John Perrotta, who many younger comics credit with giving them their start.

Although local comedians aren’t in this for the money (many have day jobs), Mike Murray and fellow Hall of Famer Bill Simas are the brains behind Funny for Funds, a highly successful fundraising act that’s raised about $4 million for various charities. Murray and Simas employ some 100 comics all over New England.

“The comedy scene here is incredible, we’re stocked to the rim with great talent, and I think we don’t get enough recognition for that,” Murray says. “The only sad part is there aren’t enough places to perform.”

Surprisingly, one subject comics of all experience levels tend to steer clear of is political humor. It’s too divisive, they say.

And the recent demise of the Providence Newspaper Guild’s Follies, the once-popular satirical review with its lampooning of all things politics, has left a void.

“You can’t do political comedy anymore — well, not can’t, but it’s dicey,” O’Donnell says. “This country really is split left and right. I say this kiddingly but it’s true: I could do a joke about playing hi lo jack and ask, ‘What’s the trump card?’ and the room would polarize. People are so triggered by this stuff.”