Horsing Around With the Providence Police

How Clydesdale horses found their way onto the Providence Mounted Command.

We’re lucky to live in a state that’s always bursting with new initiatives, grassroots projects and community-based leaders. But we’re also lucky that certain things never change: Aunt Carrie’s chowder and clam cakes, WaterFire and the Mounted Command within the Providence Police Department. You may have seen police officers on horseback downtown at concerts, in the community at local schools, or interacting with the public during parades. You may have also noticed how large the horses are that make it into the Mounted Command. The preferred horse is a Clydesdale — the same ones you see in the Budweiser commercials — and for good reason. “Draft horses have gentle dispositions and a friendly temperament,” says Sergeant Steven Edward Courville. “They are highly intelligent and are eager to work alongside our officers.” 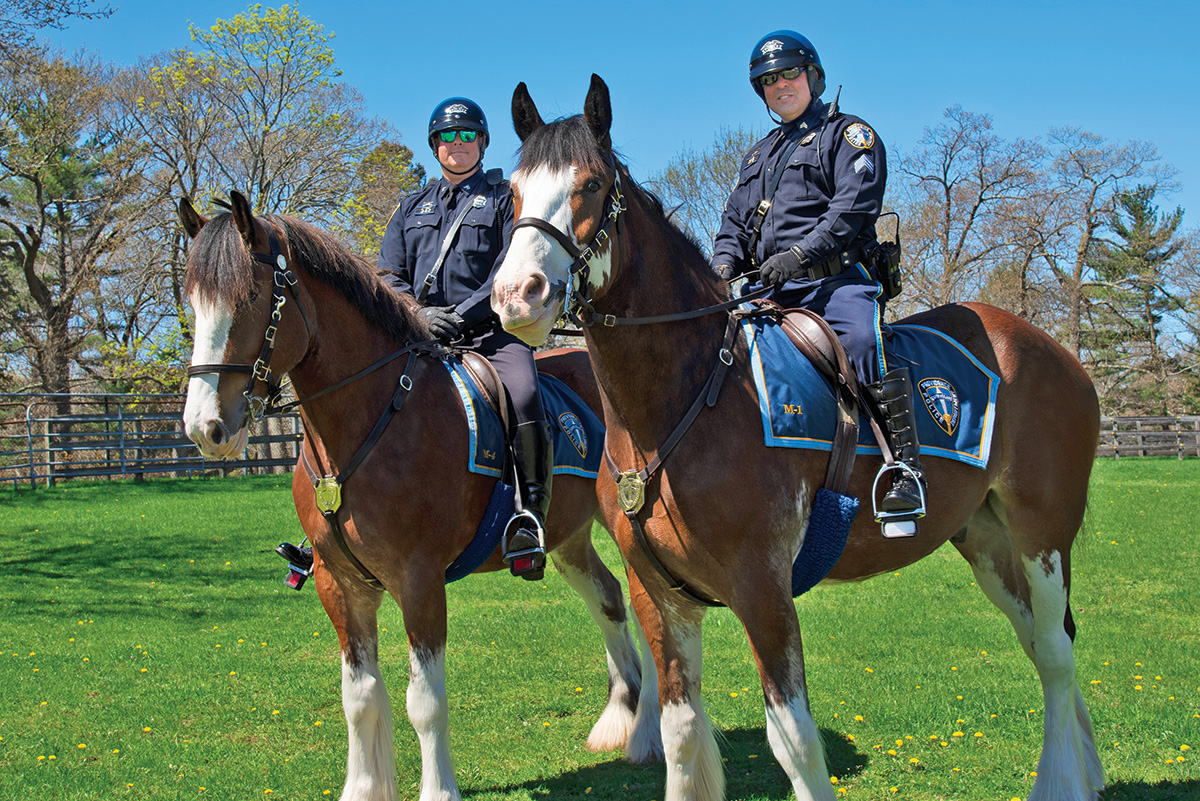 Officers in the Mounted Command must have a certain temperament, too. They have to be able to work well with members of the public, complete a minimum of three years in the Providence Police Department’s Patrol Bureau and, of course, have an ability to work with the horses. The combination makes for an approachable duo.

Both the officers and the horses serve as ambassadors for the city of Providence. With the combined stately presence of an officer on horseback and the high visibility while on patrol, the Providence Police Department Mounted Command has turned out to be one of the most successful community relations programs in the city. According to Sergeant Courville, people are naturally drawn to the Clydesdale, often smiling and waving to both officers and horses on post.

Draft horses like the Clydesdale have served alongside humans for thousands of years. Historically, draft horses were bred to carry armored knights into battle. Because of their conformation and heavy bone structure, they are ideally suited for carrying a large police officer under saddle onto the city streets.

But, really, the most important question about the Providence Mounted Command: Can the public pet the horses? The answer is a resounding yes. “Of course! We welcome the opportunity to have people engage with our officers and our horses,” says Sergeant Courville. “Our goal is to establish positive interactions between the Providence Police Department and members of the public.”

Visit the horses (and their officers) at their stables by appointment Monday through Friday. 1000 Elmwood Ave., Providence, 243-6042, providenceri.gov