Matt Gennuso has long been determined to explore the grittier side of French cuisine. When he took over Chez Pascal sixteen years ago, he immediately tempered its traditional refinement with an earthy, pork-driven tone. More Alsatian than Parisienne, Gennuso has been breaking down pigs for pate and sausage for well over a decade, intent on proving that the French are just as comfortable at the picnic table as they are in a palace.

He’s always been slightly irreverent in his approach, deep-frying duck confit and doubling down on a brazen ode to adipose. (The French, in this kitchen, are as much about debauchery as decadence.) But as the years progressed, Chez Pascal has channeled its identity in a more concentrated manner. First came a hot dog food truck that doled out in-house franks with steeped onions and homemade mustard. Then came the Wurst Window, a glass passageway that delivered myriad sausages with curries, bacon jams and dollops of melted cheese. This year, Chez Pascal has finally integrated its varied personas under one renovated roof.

The original dining room still stands in salmon pink, filled with assorted ceramic piglets and a bar that conjures a retro German tavern. The other side of the restaurant, however, is entirely organic, sage green with topiaries and herbs scattered around the room and an open stairwell that rises up to Gennuso’s rooftop garden. Jars of chowchow, pickled beets and red cabbage sit stacked on a corner shelf by the kitchen. Across the room, the sausage station hosts a four-seat bar where hot links sizzle on the griddle and staff moves warmly through the tight space. (“More serving boards for you, Ladybug,” smiles one server to the line cook as she breathes deeply. “You’re rockin’ it.”)

Chez Pascal has been a neighborhood refuge for years and, despite its European roots, it continues to offer small concessions to Rhode Island culture. Stuffies ($5.25) are packed with housemade chorizo and served comfortably alongside crocks of gruyere-topped onion soup ($12.25). It’s a space where cultures coalesce, where delicate herbs make a home with varied combinations of smoked meats. If any one thing manifests Gennuso’s essence, it’s his charcuterie board ($19): a mingling of meat wizardry, from quenelles of pork rillettes to country pate and thick slices of head cheese. If some kids spent their weekends taking apart toasters and putting them back together, Gennuso is still at it — he’s just at it with 200-pound pigs. 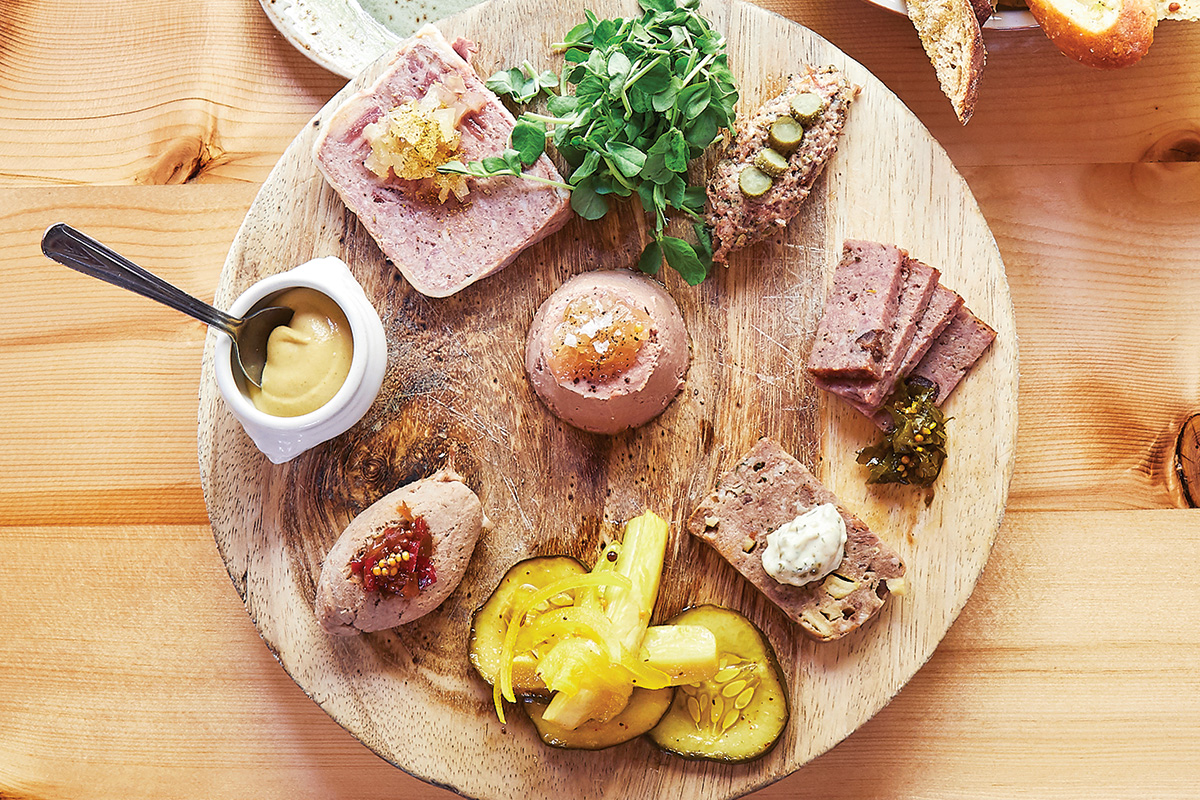 Selection of housemade pâtés and charcuterie with housemade bread. Photography by Angel Tucker.

That’s not to say Chez Pascal only does hale and hearty. Part of being a true local, even if you’re speaking in French, is to support nearby farmers and fishermen and their inventory determines the menu as much as Gennuso’s vision. One evening, it’s fillets of seared halibut with minute radishes and turnips as demure as a dish can be — all technique with almost no flash or ego. In fact, altruism is alive in every corner of the restaurant given how often customers return and how well servers recognize the regulars. Some are greeted with kisses, some with a high five and, when an occasional diner asks if the bar could make his own signature drink, the server simply says, “Let me get a pencil so we do this thing right.” 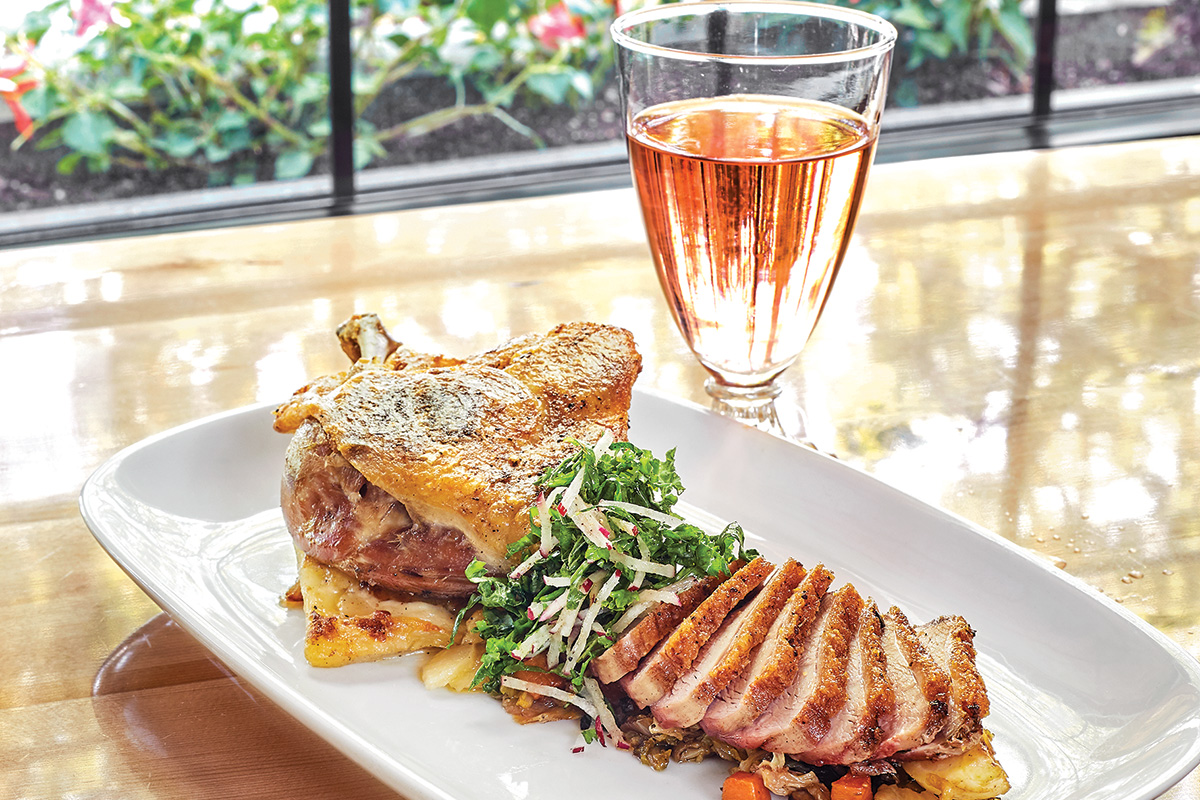 It’s no surprise then that the most popular foods here are the homiest. The restaurant serves two handmade pastas each night, including a smoky canestri Bolognese (brought to life by an ice cold oval of herbed ricotta cheese) and a spaghetti served with little more than salt, pepper and sheep’s milk cheese. Simplicity often rules. (“I gave up gluten three months ago,” whispers an enthusiastic diner, spaghetti strands hanging from her mouth. “Shhhhhh.”)

Most avenues at Chez Pascal lead to comfort but the archetype is a plate of sliced meat bathed in red wine. Softened brisket ($28) is paired with potatoes gratin and root vegetables while lamb is draped over flageol
et beans and greens, with the scent of fruity wine wafting through the air like a tranquilizer. Even the duck in sour cherry sauce ($32) — especially the duck in sour cherry sauce — brings a hypnotic hum to a dining room that reverberates with conversation from the time the first table is seated. 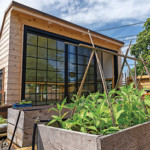 But part of the reason Gennuso can fill the house nightly, even after this many years, is because he knows the way people of any country eat. The $32 plate of duck is worth its weight but it may not be everyone’s Wednesday night meal, and this is where the integration of distinguished dining and the illustrious hot dog stand matters. These days, the menu is devoted as much to handheld meals as it is to a six-hour braise. The Wurst frankfurters are served in various incarnations: traditional (yellow mustard), European (white beans, wilted greens and aioli) and American (chili and cheese sauce), all for $6 or less. Sausage links are served singly as appetizers or in bulk as a main but part of the thrill is in the myriad condiments that spring from the kitchen: bacon jam, curried onions, relishes, cheese and all things pickled. But the Beyonce of the bun world comes in the form of a sandwich filled with Gennuso’s mad hatter mixtures, from bacon-wrapped pork meatloaf to pastramied pork butt, all topped with a variety of condiments that run the gamut from savory to sweet. It’s a single bite of cultural amalgamation that tastes as much like a French butcher’s work as it does of American street food.

Dessert is simpler in its execution though the offerings still stay close to tradition. Creme brulee ($11) comes in trios, profiteroles ($12) are stuffed with hazelnut or Nutella ice cream and pear upside down cake is served with crumbled blue cheese and caramel sauce ($11). Everything in this round has an element of the familiar and each bite reassures that sweets don’t have a country as much as a universal appeal. But that’s really Gennuso’s goal in the end: to prove that food is an international affair, a language that readily transcends geography. It’s true that we are drawn to food that takes us to distant lands. But Chez Pascal has always been eager to prove that the exotic easily becomes familiar and, in time, we can thankfully call it our own.

960 Hope St., Providence, 421-4422, chez-pascal.com.
Open Mon.–Sat. for dinner. Wheelchair accessiblity is a challenge as there’s a step up into the restaurant. Street parking.
Cuisine A Frenchman in New England.
Capacity Ninety or so with bar seating.
Vibe A Tale of Two Cities: Traditional European meets modern American.
Prices Appetizers $5–$21; entrees $6–$32; dessert $10–$13.
Karen’s picks Charcuterie, all things made from a duck, pasta.