Providence Native Borboleta Set to Perform Debut Album at AS220

Get an in-person glimpse of Borboleta’s debut album, Until That Time, which is set to be released on October 20. 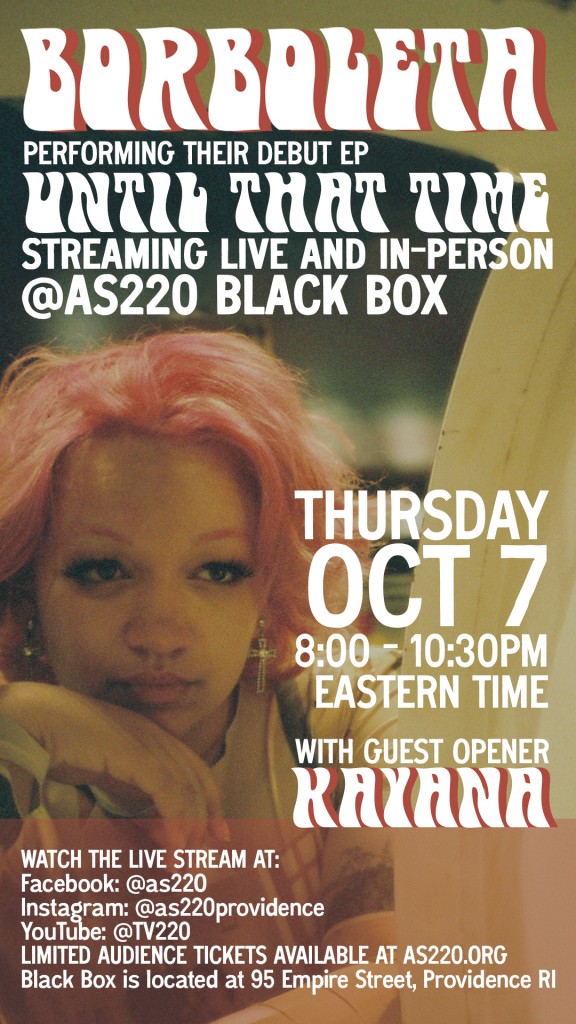 Twenty-two-year-old Rochelle Leach is also known as Borboleta, a local musician from Providence.

On October 7 from 8 to 10 p.m., catch local musician Borboleta performing their debut EP, Until That Time, at the AS220 Black Box or via streaming platforms including Facebook, Instagram and YouTube.

Twenty-two-year-old Rochelle Leach, or Borboleta as fans know them, was born and raised in Providence with Cape Verdean roots. Butterflies, or “borboleta” in Portuguese, always resonated with the artist, so it felt like a natural moniker to match with the music and the journey to reach where they are today. It was after graduating high school that they started taking music seriously.

“I was going through a lot of transformations and personal depth and I felt like I birthed this version of me that was confident enough to pursue music,” says the Classical High School graduate. “For me, that was reminiscent of butterflies, and I’ve always loved butterflies.”

The process of producing the debut album Until That Time took more than a year of coming up with rhythms, lyrics and recording the body of work in Boston, all while working their job in childcare at the Lincoln YMCA. Either in between shifts or when making silly songs for the kids they cared for, Borboleta would keep their creative flows going no matter the location. Even one of their past students, a nine-year-old named Olivia, felt inspired by the melodies of the track called “Take Your Time” that was played for the group. Olivia made a drawing for the musician to use for the track’s cover, which displays a honey bee positioned by a tall pink flower. The drawing is used as the track’s cover to this day.

“Words have always been something that gave me superpowers and made me feel really strong,” says Borboleta. “The process of writing [Until That Time] was very empowering and traveling to record it was just as exciting, I was really grateful the whole time to have the opportunity.”

Early 2000’s pop songs like “Love Song” by Sara Bareilles and Corinne Bailey Rae’s “Put Your Records On” had a huge influence on Borboleta, who credits the genre for not only shaping their childhood, but playing a large role in the thought process and inspiration when it comes to producing songs.

“My understanding of pop my whole life has been that it encompasses several genres,” Borboleta says. “It’s just what people are listening to or what’s the most influential at the time.”

With their own pop album and upcoming live performance, Borboleta hopes to make people feel loved and supported. “Let’s just experience life together and live our lives as much as we can.”