The Blackstone Valley favorite has new digs, but the food remains deliciously decadent.

Despite moving down the road and into a far more polished space, Blackie’s remains an outlaw at heart. If there’s a motto fueling chef and co-owner Angie Armenise’s work, it’s to aggressively disrupt, overturn or demolish a diner’s perception of what a restaurant can be, at any given meal. Because here’s the thing: From the outside, Blackie’s has always appeared to be ordinary, even (gag reflex) family friendly. The menu is full of dishes that ring of nostalgia and familiarity — fried fish, Asian noodles, various incarnations of dumplings and a plethora of protein on a bun. Nothing to see here, right? 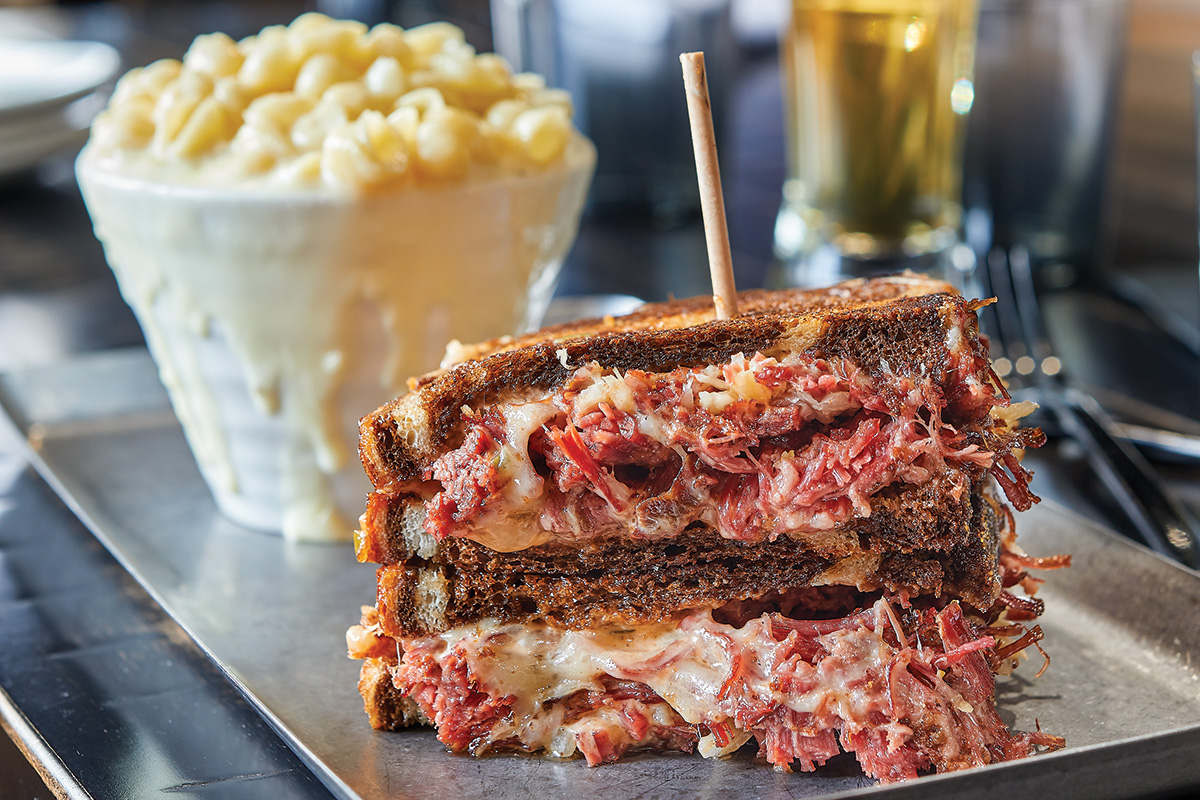 “Hi, My Name is Reuben” sandwich with mac and cheese. Photography by Angel Tucker

But it’s all an astonishing mirage. It’s one thing to push culinary boundaries into uncharted territory; liquid nitrogen, laboratory filters, gelling agents and ultrasonic probes can change the core characteristics of food. But how do you change the history of what we have already recorded as cultural identity? Armenise plays with food in a cubist manner, deconstructing the status quo and rearranging it into an alternate and better version of itself. In the end, it’s a culinary coup, even if the base materials are bacon, cheese and barbecued meat rather than oysters, uni and artisanal greens.

The menu at Blackie’s is massive, pages and pages long and another reason the culinary establishment may scoff at the notion of acute dexterity. (Look at Paul Robeson, naysayers. More than a dozen languages, bass baritone, Broadway, a law degree and three collegiate sports.) But extensive as its inventory may be, Blackie’s is still hand-pulling mozzarella, smoking brisket, pulverizing pork rinds into dust and creating vegetarian versions of everything from fish sauce to compressed tofu. It’s a manic approach to American food that capsizes monochromatic memories and leads you into a technicolor euphoria. Take, for instance, a curious amalgam titled “tuna and bacon.” Sushi-grade tuna is rolled in bacon crumb and served over bacon fat rice that lounges like a raft in bacon broth ($19). Cold avocado is the only foil to an assertively smoky dish but if it all sounds overbearing, therein lies the magic trick. It’s perfectly balanced. It’s bacon 2.0, kinder and gentler and worth eating every day. 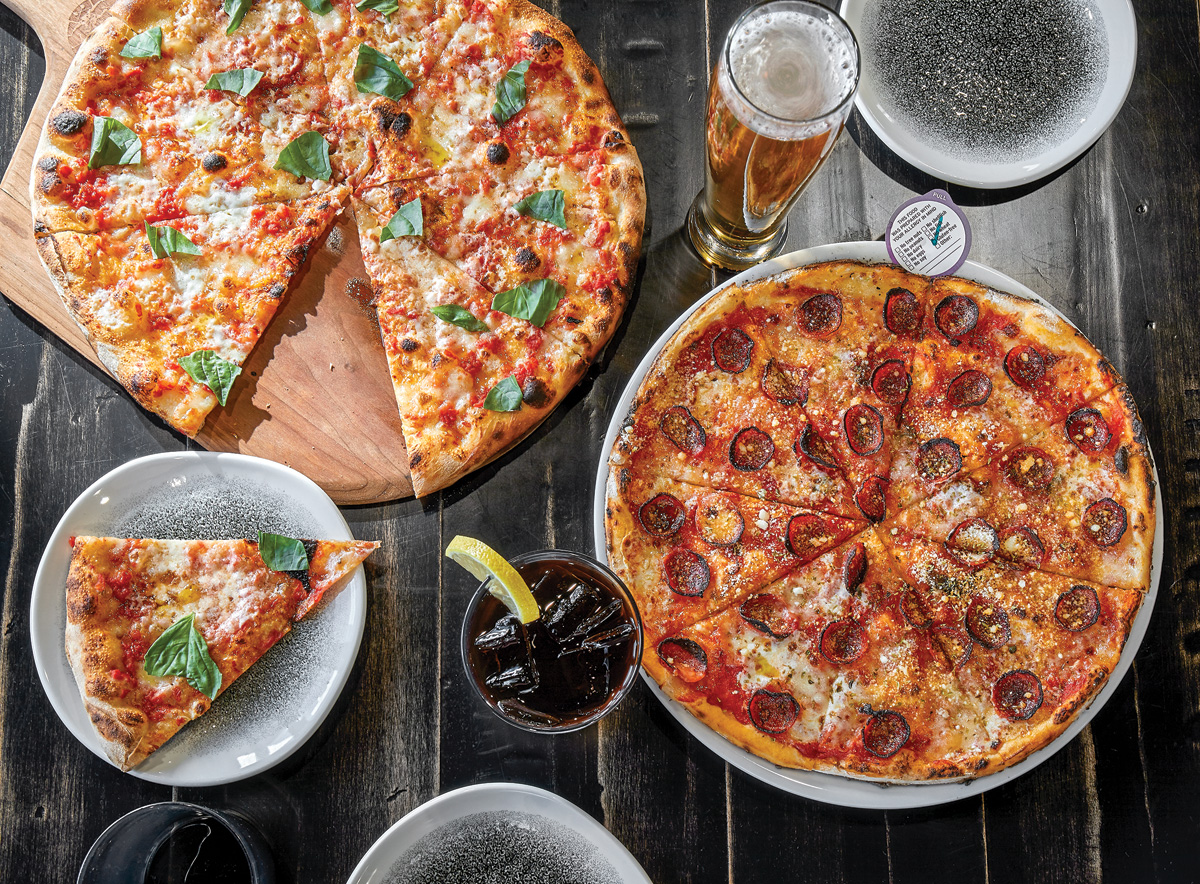 Smoked meat is, no doubt, the renegade arm of the kitchen. It shows up on pizza (carnitas), in psychedelic dips (brisket, jalapenos and whipped cream cheese) and in street noodles (cold brew coffee-brined ham and fresh pineapple with sun ramen). The building block shifts almost imperceptibly from unadorned to ornate, making it nearly impossible to figure out what Blackie’s is up to other than mutiny. A second example of insubordination: the sandwich. Certain dishes are so ingrained in American culinary lexicon that their only goal is to live up to reputation. The curtain draws open on a simple BLT, unadulterated and adored, an equation with three variables. But wait: Let’s slather the toasted butter bread with bacon fat mayo and swap out the staid tomato for thick salted wedges of watermelon ($15). Heresy? Heaven. Entire childhoods have been rewritten with a single bite and, if you don’t think a sandwich is worth scrutinizing, you’re living in a rarified and limited existence. It’s a game changer.

So, too, is My Very Own Goldfish Stick ($17), a fluorescent orange ode to our halcyon days. Who cares about a fish sandwich, you ask? Half of New England and, despite its jarring, pulverized cheese appearance, it might be the best filet o’ fish on the planet, couched in a pillow-like brioche bun that’s softer than a marshmallow. Gone are renditions that teenagers have recoiled from since HoJo was in business; this is both a time capsule of kitschy diner food and an avant-garde interpretation. And it tastes way better than you want it to. 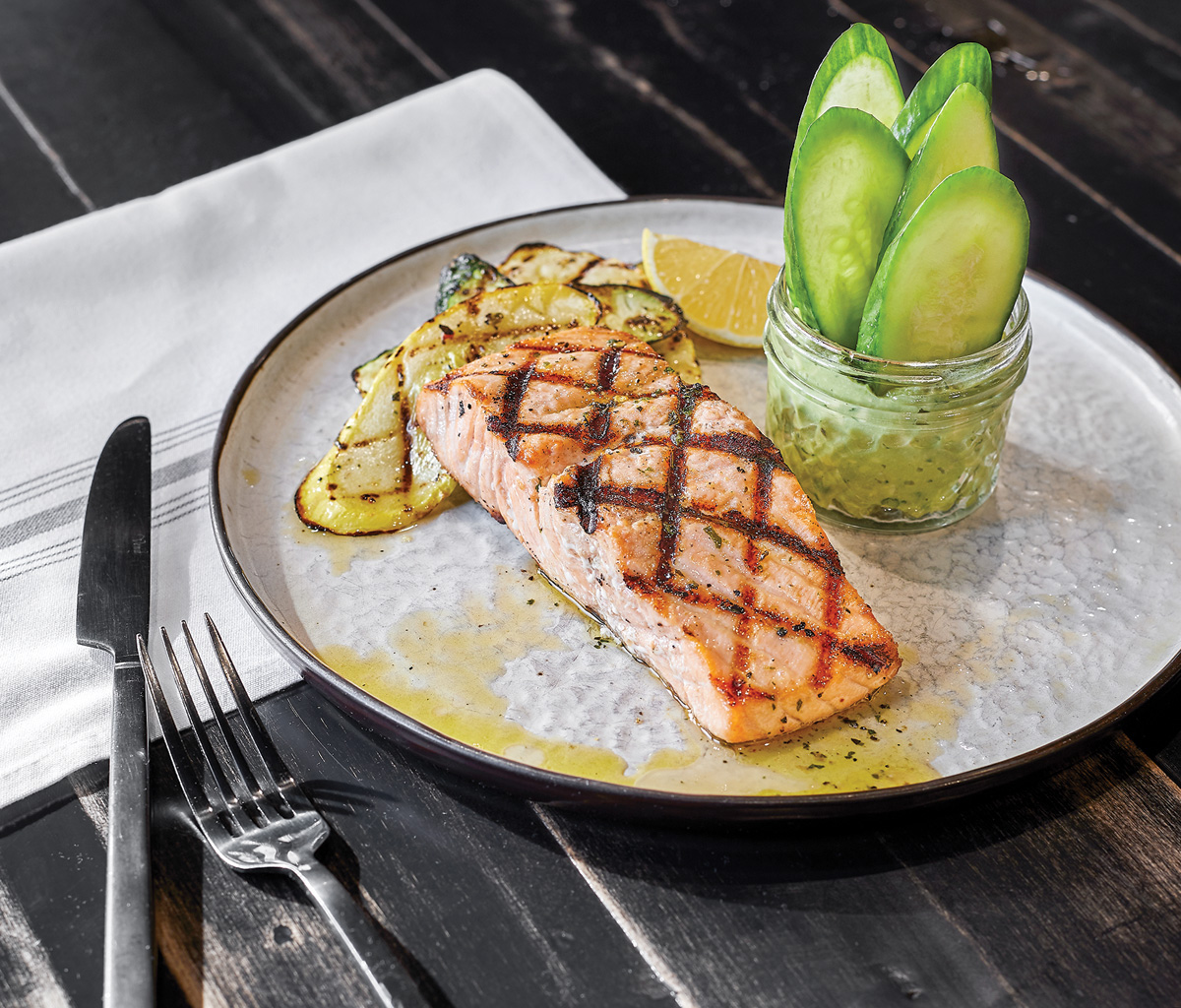 If the world views American food as an over-the-top, bombastic display of debauchery, Armenise is willing to play along — but only to prove that a menu can look like Kim Kardashian, act like Linus Pauling and still bring a joke home like John Mulaney. In fact, there seems to be a nod to the great American chain restaurants with their sixteen-page menus, but only to envision a world in which a tapestry is sewn stitch by stitch rather than by sticking prefabricated panels together.

That’s not to say Blackie’s doesn’t play it straight. Perhaps the most unexpected thing about the kitchen is that, hidden under its brash exterior, is the soul of a gluten-free vegan. Always ahead of the curve on keto, paleo, gluten and dairy-free diets (you’re a one-trick pony if you only do excess), the new restaurant has recommitted to a merry-go-round of additions and restrictions. The last page of the Bible-thick menu is a DIY showcase of ingredients that reads like a Mongolian barbecue of epic proportions. Compressed tofu, vegan fish sauce and a cascade of vegetables can be thrown together for those eating clean next to their bacon-drenched spouses. Listen carefully and you’ll hear the soft singing of bibbed angels drenched in peach-pineapple barbecue sauce, proclaiming harmony across the land.

In the end, it’s a futile effort to categorize a place that is so willfully outside the proverbial box. It’s hard to even tell if Blackie’s can sit comfortably under the moniker of fine dining. Who chooses to serve a trough-size portion of nachos but makes their own cheese ($16)? Who makes their own pastrami sous-vide style ($17) just to bury it in the middle of fifty densely detailed dishes? Who soaks carrot cake in sweetened buttermilk before slathering it in cinnamon cream cheese frosting, candied carrots and carrot coulis ($9)? Everything is fed through the lunacy of a Willy Wonka lens but it’s all the more irresistible because of it. 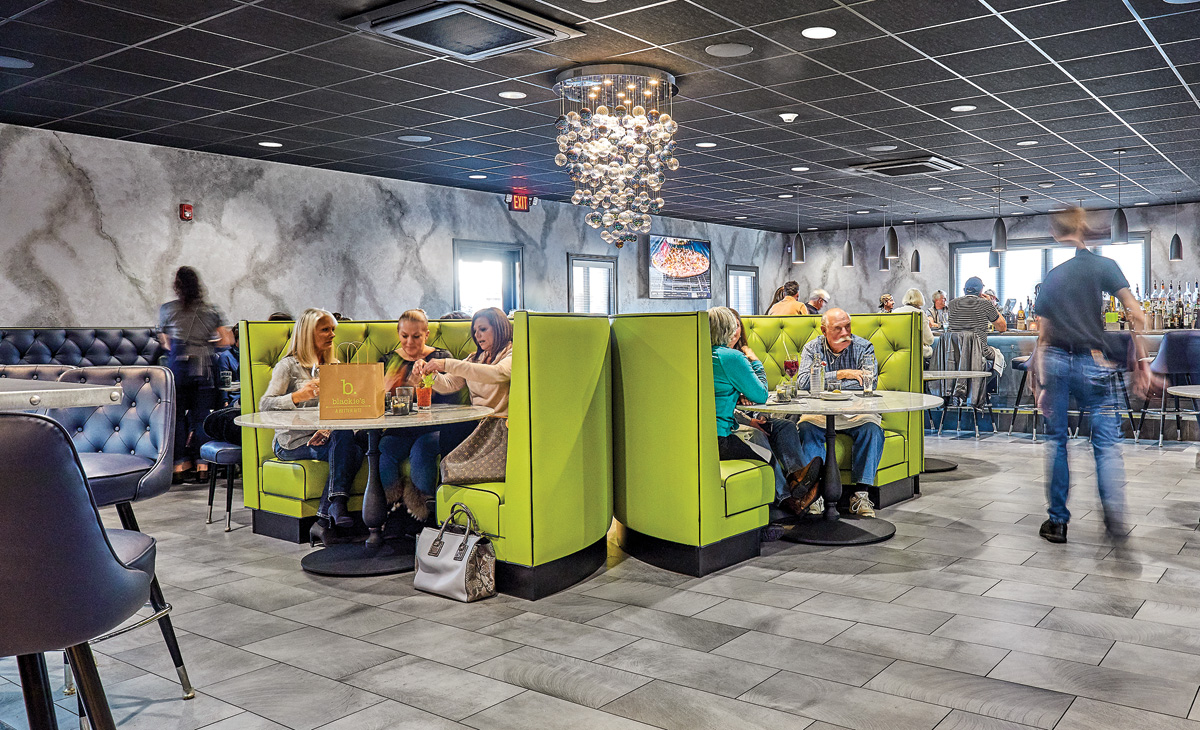 You can claim that Blackie’s is just a refurbished tavern in lime green and black, set along George Washington Highway in the middle of Smithfield — and that, stamped with the dreaded family-friendly label, it simply can’t aspire to much. But the experience of eating there says otherwise. Diners start fantasizing about their last meal as soon as the empty dish is whisked away and, if a $15 plate can do that, the accomplishment is all the more pronounced. If I have to, I’ll gladly borrow someone’s toddler to sit with me and play the part.

280 George Washington Highway, Smithfield, 231-4777, eatatblackies.com.
Open for lunch and dinner seven days a week. Wheelchair accessible. Lot parking.
Cuisine Colloquial cuisine in surround sound.
Capacity About 250.
Vibe Organized chaos. Go on a weekday unless you want to wait an hour or more for food.
Prices Appetizers $11–$20; entrees $14–$31; dessert $9.
Karen’s picks Find the weirdest thing on the menu and order it.