The North Kingstown aquarium offers children and adults a mellow introduction to our neighbors under the sea.

Lost locals are proud of Rhode Island’s designation as the Ocean State. We happily tout the wave silhouette on our license plates, flock to waterfront restaurants in the summer and, for some of us, even get permanently inked with anchor tattoos. Call us thalassophiles, because we love the sea.

And yet, how much do we know about our neighbors just beneath the surface? If you’re anything like me, your familiarity probably ends with what’s on the menu at local restaurants. 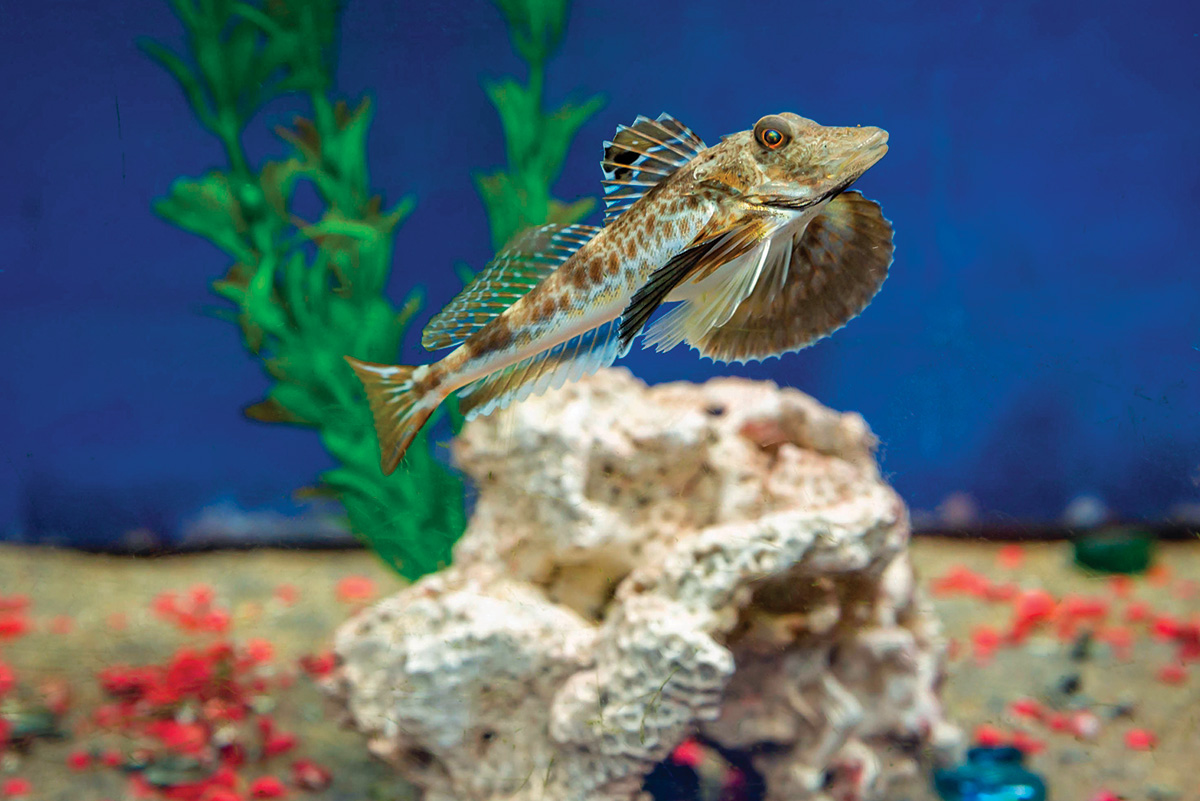 A northern sea robin idly swims in his home tank at Biomes. Photography by Sarah Farkas

Luckily, Biomes Marine Biology Center in North Kingstown, New England’s only private marine education facility, is happy to fill in the blanks. Walking inside is even a bit like being submerged in the sea, with its dim yet calming lighting, its ever-present reverberations of splashes and trickling and its walls covered in beautiful depictions of all sorts of sea life (thanks to local artist Bob Rattigan). Plus, there’s its abundance of aquatic inhabitants.

“That’s the thing that I hear more than anything else: People are amazed by the variety. They had no idea that there are this many types of animals in Narragansett Bay,” says Mark Hall, the center’s founder and owner. “But they’re all around, you just don’t see them on a regular basis.”

And, unlike the rest of us, Hall has been aware of the variety since a young age. 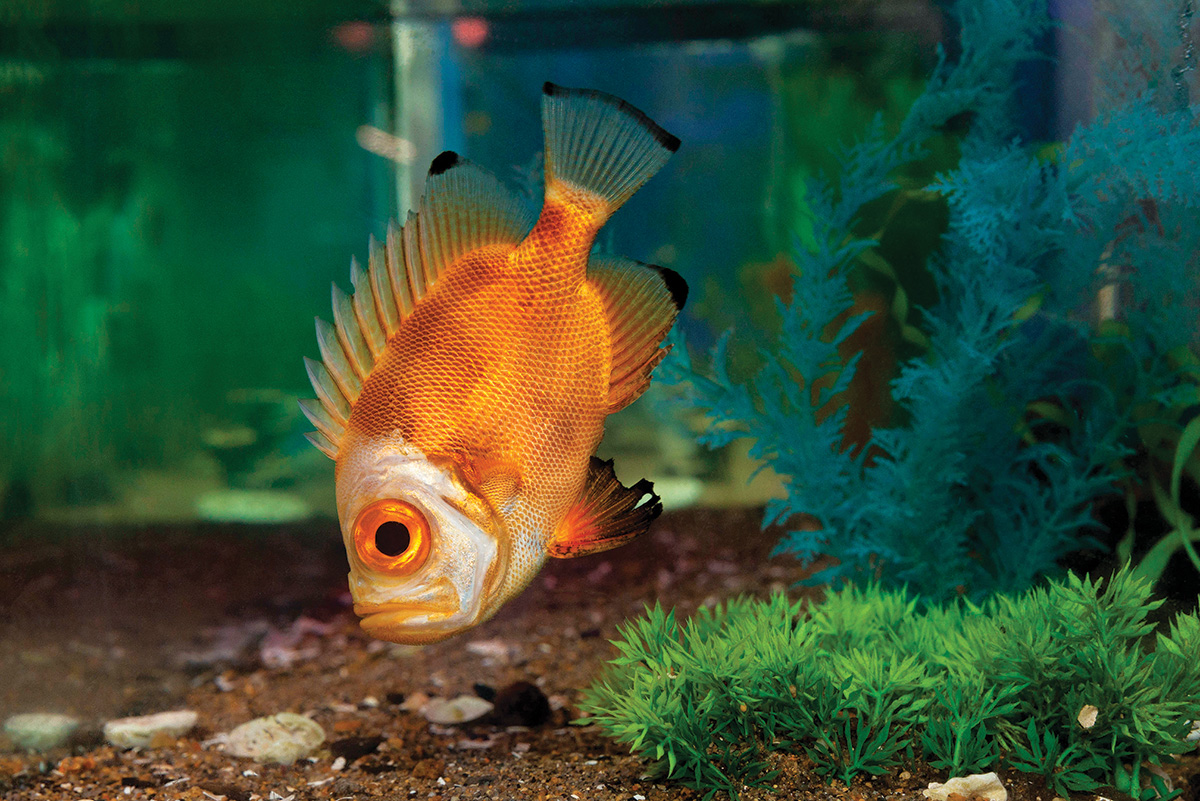 Normally a nocturnal fish, this short big-eye gives the camera the side-eye. Photography by Sarah Farkas

“My mother always said I never wanted to go to the beach when I was four or five years old, I just wanted to hang out under the bridge and see what was under the rocks,” he says with a laugh.

Hall put that interest to good use early on, starting a business in middle school where he gathered specimens for high school science classes.

“I’d get orders for all these different starfish and jellyfish and I’d go out, collect them and then ship them to schools all over the country,” he explains. “That’s how I learned about all of the animals, just from being out there every day.” 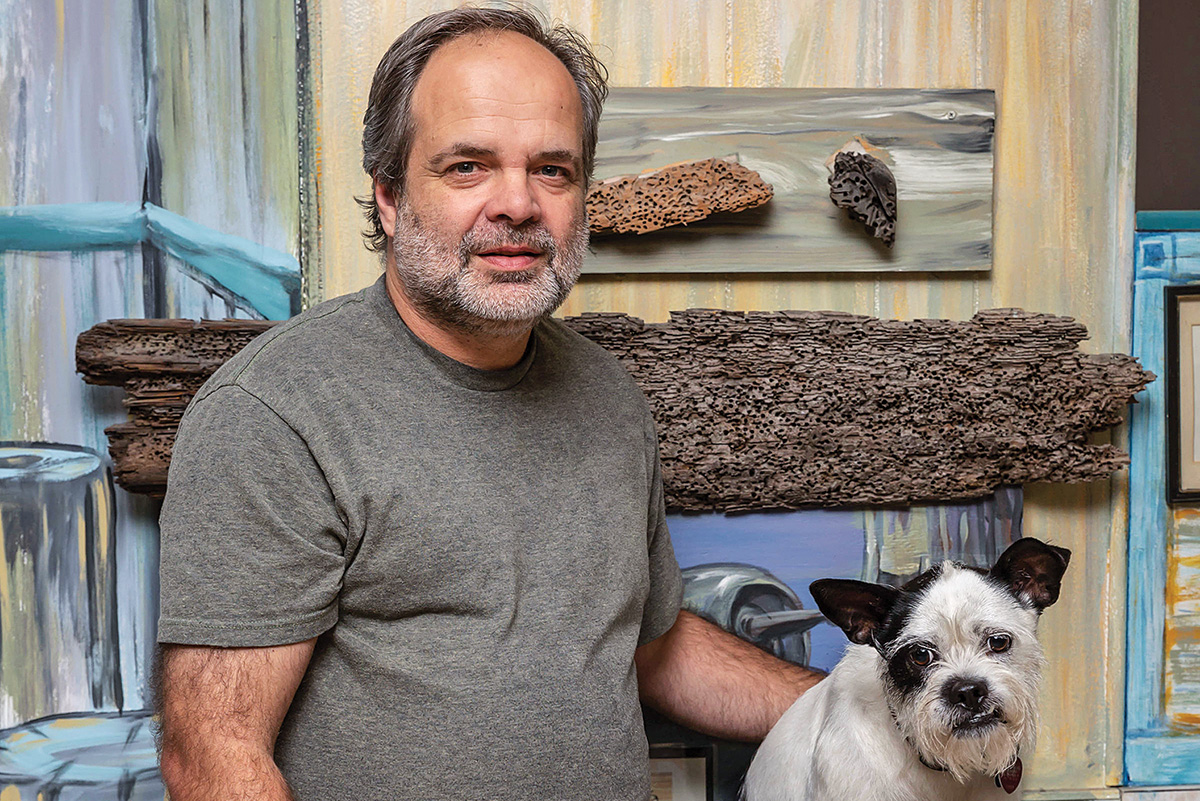 As the years went on, Hall began visiting local schools to give informed presentations on ocean crabs, puffer fish and the like. Once his personal collection of critters grew too large for his garage, he established the original Biomes in the Shady Lea Mill in 1997.

Hall stayed put for nearly two decades, continuing his mission of educating the public, before expanding and moving into the current location on Post Road in 2013.

Today, Biomes is open seven days a week from noon to 5 p.m., with a walk-in fee of $11 for adults or $9 for children younger than twelve and seniors sixty-five and older. Or, for $100, families can earn membership status and have unlimited access throughout the year. As I tour the center, I understand why someone would want to visit as much as possible. There’s a lot to take in.

“My goal is for visitors to learn about the variety of animals that we have,” he says. “It’s all self-guided; my feeling is that pretty much every animal has something unique about it that’s really cool, so you’ll find cards with interesting facts next to every tank or exhibit.” 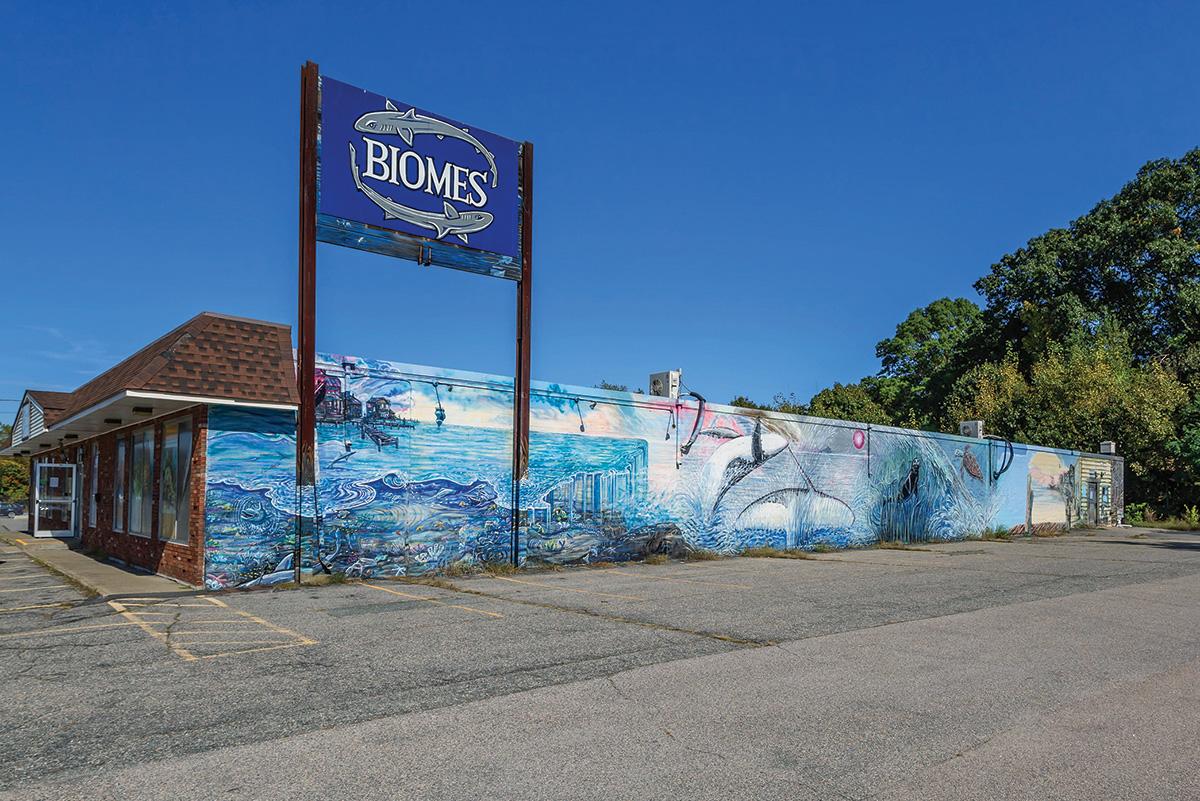 The right side of the Biomes’ exterior proudly displays a mural by local artist Bob Rattigan. Photography by Sarah Farkas

For example, the tautog is one of the few fish that can identify individual faces, while the mangrove snapper knows the difference between live prey and fishing bait, making it very hard to catch. Some of the cards also include backstories for particular residents, like Lucky the grey trigger fish, who narrowly escaped a Newport fisherman’s dinner plate; a conger eel that was rescued from an abandoned lobster trap; and a box turtle named Owen who found a home at Biomes after her original owner could no longer care for her. And then there are the tropical fish.

“There’s a lot of them around here; different species come up through the gulf stream every year,” Hall explains. “And around this time of year, we try to find as many as we can because once the weather gets cold and the water temperature drops, they will all die.” 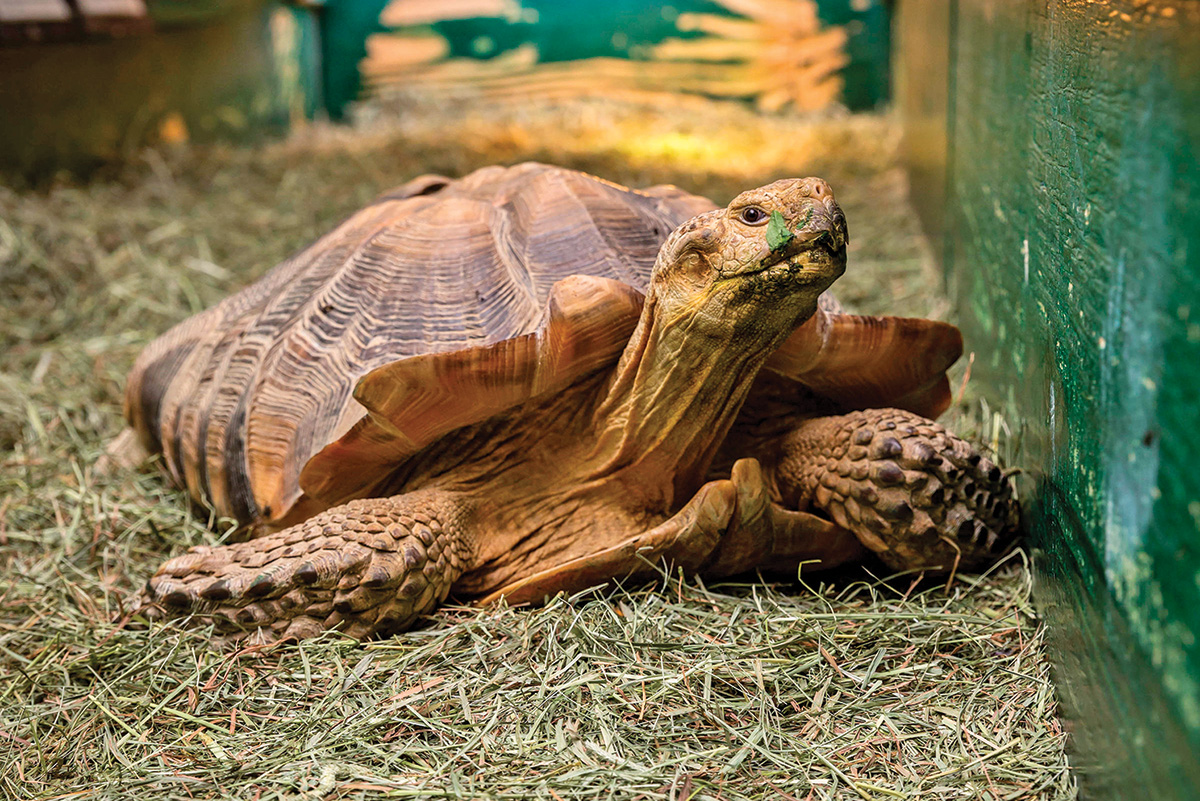 African Sulcata tortoises, like Darwin here, can live as long as 120 years. Photography by Sarah Farkas

This is new information for me, and something I would have loved to have known more about growing up. Biomes prioritizes educational programming, whether it’s their traveling tide pools at local events or hosting private programs on the premises. In fact, mornings at Biomes are often dedicated to just that.

“We host field trips for all ages, with programs for pre-K and K all through middle and some high schools. We’ve even had college oceanography classes come in,” says Hall. “We also recently did a Girl Scouts’ overnight trip.”

And while Biomes does host birthday parties and is home to a play area along with many little-kid-friendly activities, Hall wants to make sure older generations feel welcome, too.

“I really designed this place with adults and older kids in mind. There’s plenty of content — we have the largest collection of New England animals in the world, so there’s a lot to learn about,” he says. “Adults will come in and you can tell they’re thinking, ‘Is it okay that we’re here? We don’t have little kids with us….’ Yes, please, you’re who this is for!” 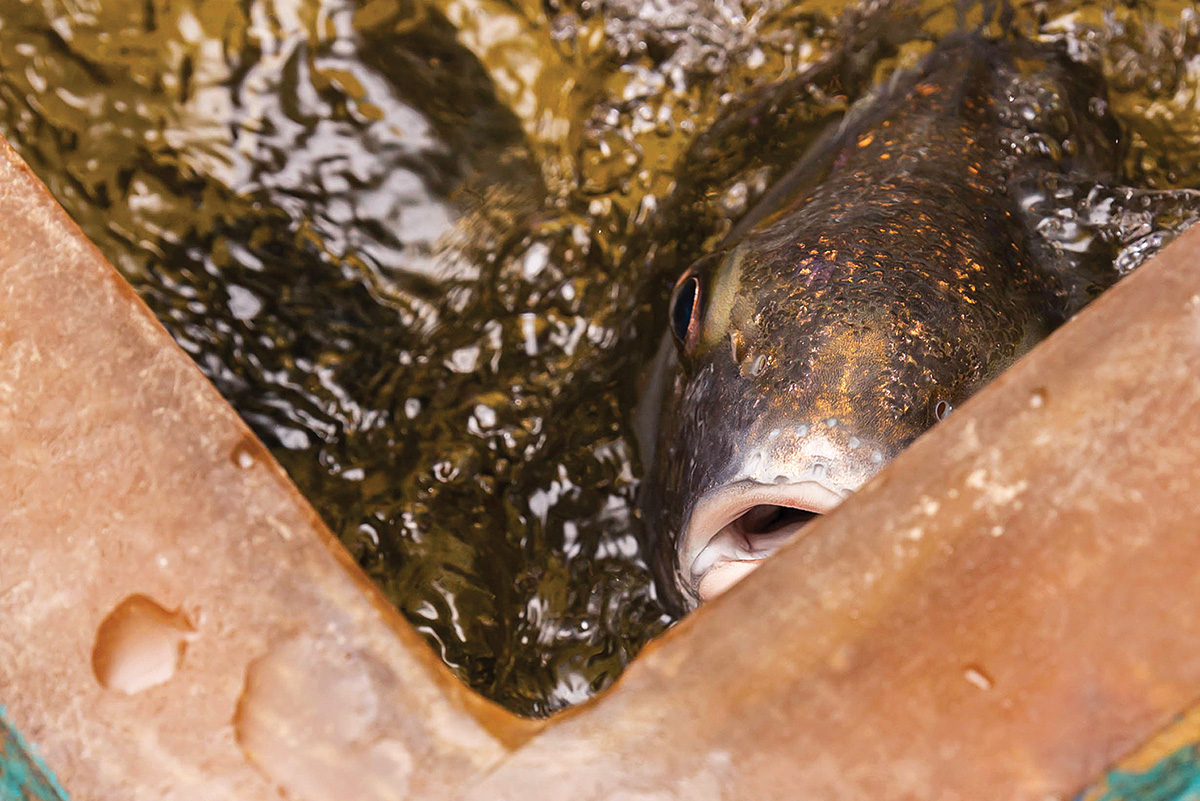 The black drum pops up to say ‘hi.’ Photography by Sarah Farkas

Walking around some more, I see lots of adults. One couple in particular, probably in their sixties, is stopping at every exhibit, excitedly pointing out facts. By the time I’m ready to leave, I feel accomplished, having petted a shark, learned about the Rhode Island sand project and admired a fossil or two. And then I come across the black drum fish. As I pass by his waist-level, open-top tank, the large fish charges towards me.

Hall sees me nearly jump out of my skin and laughs. “Did he jump out at ya? He’s like a dog, he loves people.”

And with that, Biomes won over another adult fan.