Nostalgia runs deep at this northern Rhode Island institution, which plans to move from its current location next summer.

If you find yourself north of Route 146 and you’re looking for directions, chances are the Beef Barn, a nostalgic Rhode Island landmark, will be a point of reference. (Isn’t that how we all get by here in little Rhody?) A suggestion: Take the high road and fuel up at the Beef Barn on a roast beef sandwich, a side of fries and a coffee milkshake (for only $6.75!) and just forget the rest.

(Editor’s note: the Beef Barn will relocate to 200 Industrial Drive in North Smithfield, just about two miles away, in late summer 2020. The move was announced on Facebook after an assessment of the physical limitations of the current location including fire, demolition, parking issues, congestion, building renovations and leased land. The new space will allow the Beef Barn to increase seating capacity, provide outdoor seasonal seating and ample parking. Beer and wine will also be served at the new location.) 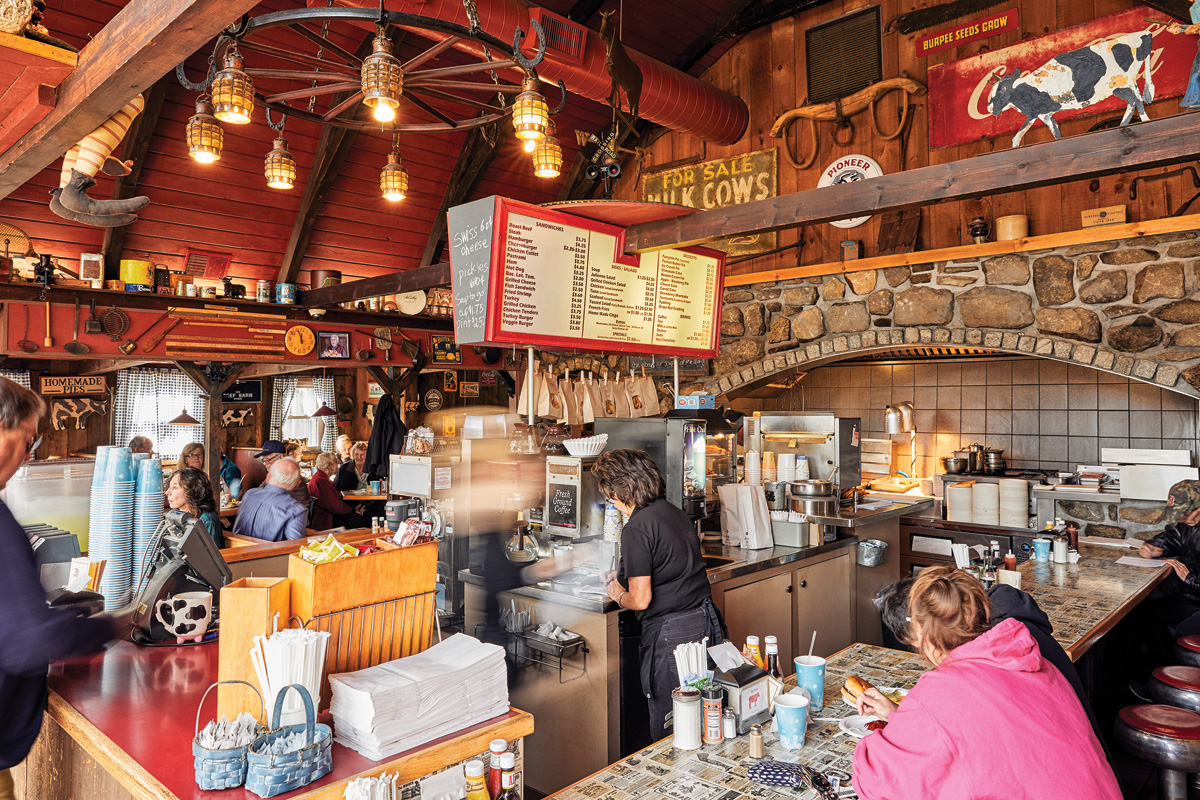 The inside of the Beef Barn is timeworn and cozy. Photography by Joe St. Pierre

A family-owned and operated restaurant serving locals since 1969, the Beef Barn is more than just nostalgia between two slices of bread. It’s a place where community gathers for a delicious yet inexpensive meal — even with a limited budget, you could eat at the Beef Barn every day; all menu items are less than $5 — in the cozy confines of a timeworn and homey space just like grandma’s kitchen.

The building, which is located at the busy intersection of Providence Street and Smithfield Road, is hard to miss. The barn-like structure is bedecked in weathered brown shingles, large floor-to-ceiling windows that let in ample light and an unmistakable large red silo that juts out the right side of the building. Hauled in on a flatbed truck from owner Marc and Michelle Branchaud’s grandfather’s farm, the silo added additional seating in the 1,800-square-foot space. And the inside of the Beef Barn — though it is a tight squeeze — is just as visually appealing. 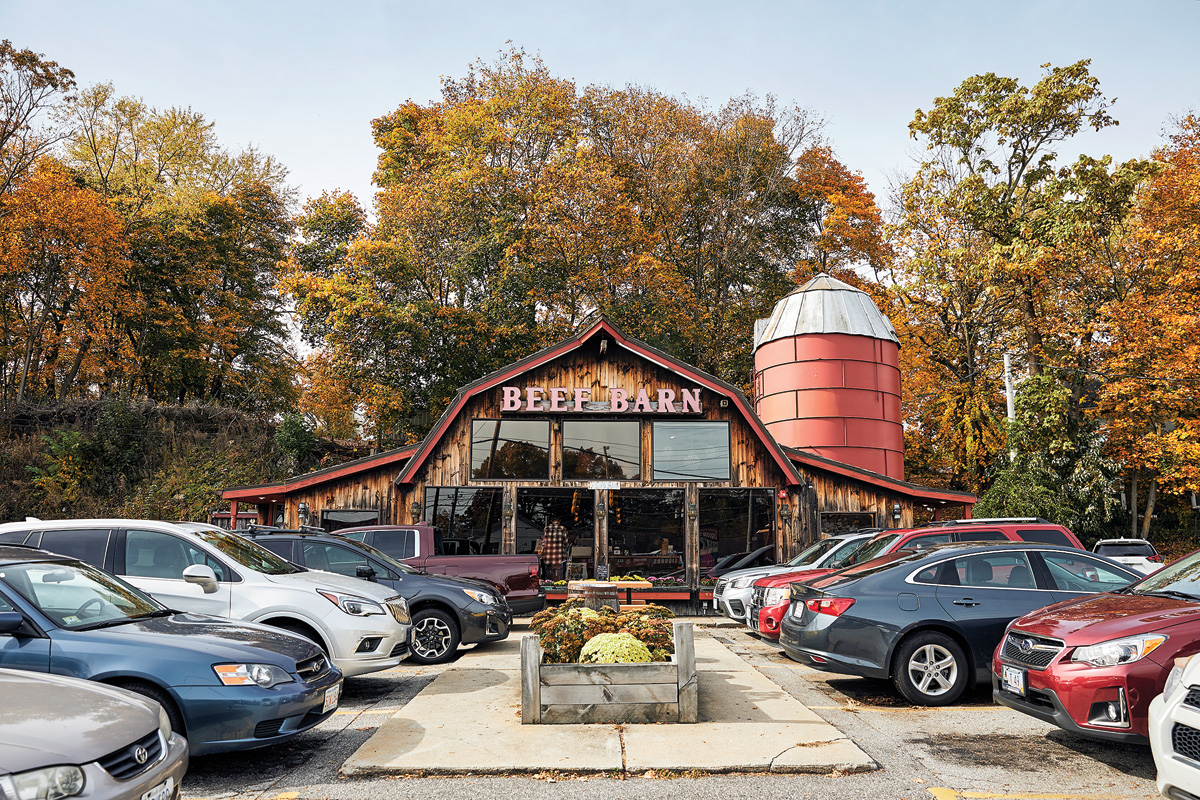 The Beef Barn is a landmark and hard to miss when driving by. Photography by Joe St. Pierre

Antiques from customers adorn the walls, country music floats to the top of the cathedral beamed ceilings and a small back room with seating for a handful of people resembles a chicken coop. The room, which was built by the Branchauds’ uncle, even features taxidermy chickens perched behind chicken wire cages. But the heart of the Beef Barn is the large stone hearth in the main part of the building. There’s a very small preparation space in the back, so the limited number of appliances up front by the hearth is where the cooking is done. “What you see is what you get,” says Marc. “Our menu has changed very little since the restaurant first opened. We are limited on space, so it is hard for us to add anything to it.”

But it is the tried and true selections that keep drawing people back over the past fifty years. “There are some customers that come in seven days a week,” he says. “We know as soon as they walk through the door what they are going to order. It’s just really great seeing locals over and over again.”

Branchaud guesses his customer return rate is about 85 percent, though it is obvious when a new customer walks through the door because they don’t quite know the system. Although there is table service, it is a no frills, no reservations, seat-yourself kind of place. 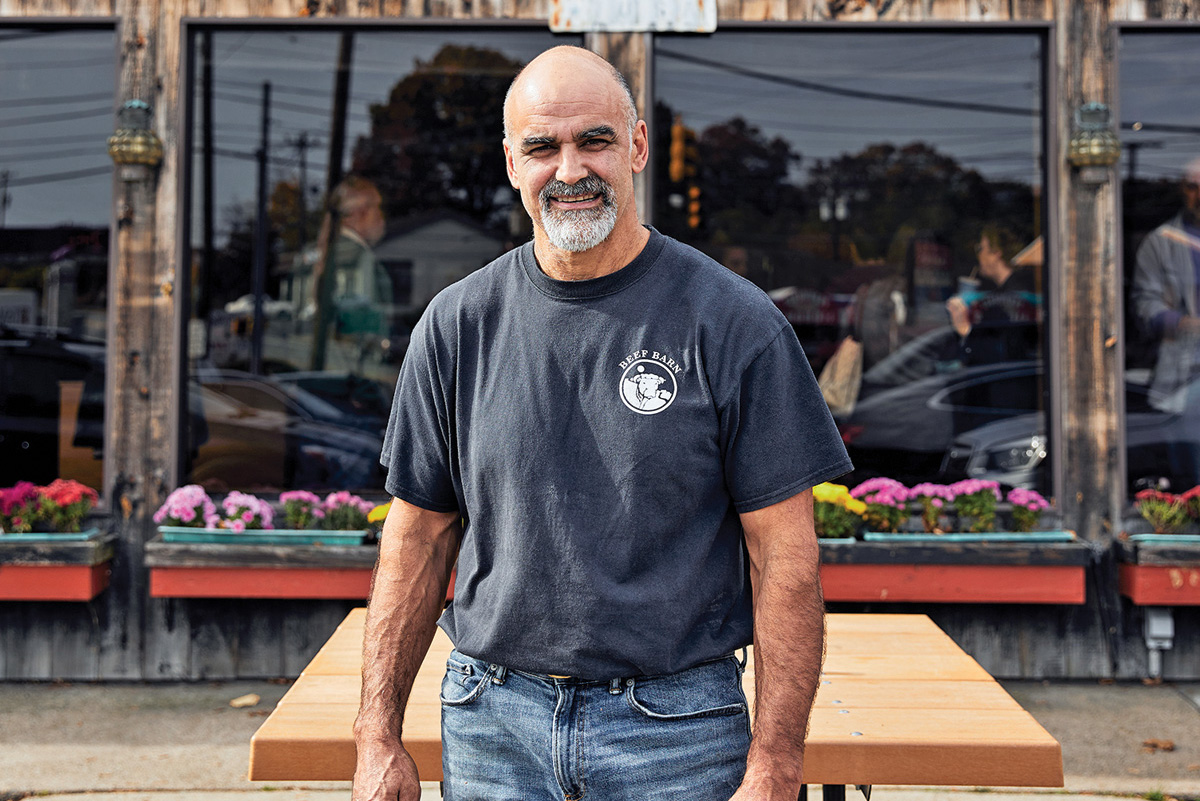 The menu is simple: Pick a sandwich, a side if you prefer, something to sip on and a dessert of your choosing. The most requested menu items? Pastrami and roast beef, of course. The pastrami is as lean as the roast beef, which is trimmed, cooked low and slow for eight hours and trimmed again. More than 1,000 sandwiches — or 100 pounds of roast beef, at three ounces per sandwich — are served per day.

So, why a beef barn?

“My father, Normand Branchaud, was very much the entrepreneurial type. He would build and work on something for a few years, then he would move on to the next project,” Marc says. “He originally got the idea for the Beef Barn from a guy out on Route 20 just outside of Worcester, Massachusetts. The guy sold roast beef sandwiches from a trailer with just a small oven, a slicer and a toaster. There were always people lined up to get a sandwich, so he thought, ‘Why can’t I do that?’ ” 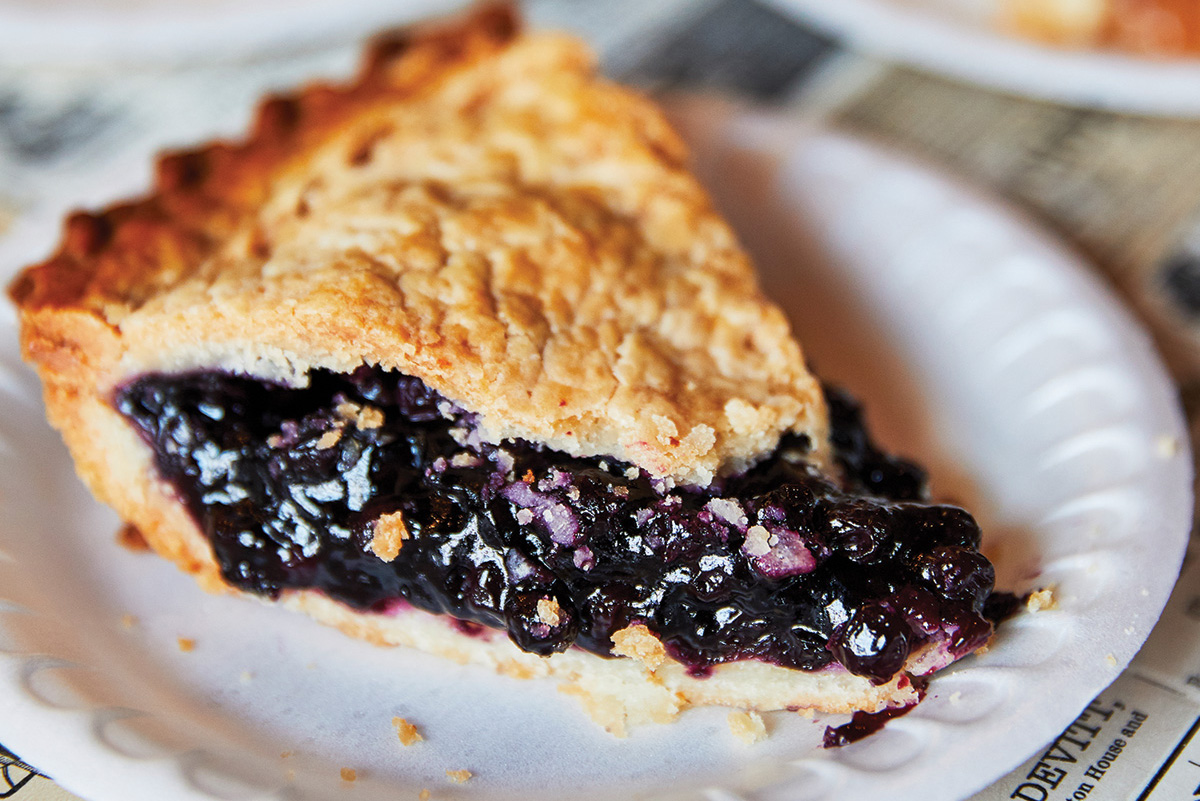 In 1976, seven years after the Beef Barn was built, Marc’s mother, Rolande Branchaud, took the helm of the family business. Marc helped often, starting at fifteen but began working full time post college graduation in 1989. During the ’80s, business boomed as families started to eat out more. And just like families in the ’80s, families today can still visit the Beef Barn for an affordable dining experience.

So, how do they keep the prices so low? It’s simple. “We buy in bulk and just sell a lot,” says Marc.

Plus, a recently acquired second Beef Barn location allows Branchaud and his loyal employees — some of whom have worked at the restaurant for more than thirty years — to keep even more bellies full. Normand Branchaud built the second replica location in Bellingham, Massachusetts, in 1971. Just five years later, the business was sold and the space was converted into a pizza joint and then an Italian restaurant. About four years ago, the building went back on the market and Marc jumped on the opportunity to restore the barn to its former glory. 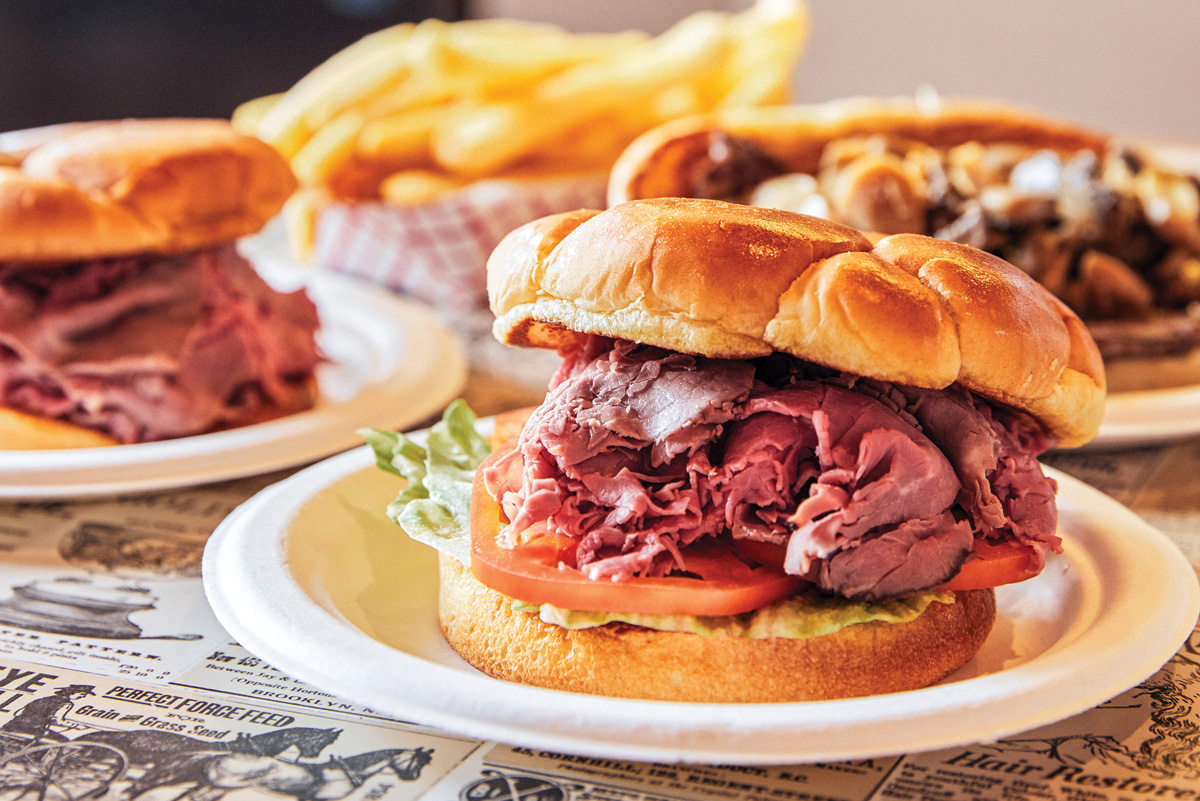 More than 100 pounds of roast beef is served daily at the Beef Barn. Photography by Joe St. Pierre

Both Beef Barn locations feed hundreds of hungry people a day with their fresh, never frozen, roast beef delights. And, if you’ve saved room for dessert, they’ll also get you a cup of his grandmother’s grape nut pudding, a family recipe.

You’ll find that not much has changed since the day they opened their doors, but that’s just the way people like it. If you ask where the locals go, well, this place would be it.