A traditional Feast of the Seven Fishes isn't always what it seems.

My first clue that my new husband and I had grown up with very different holiday celebrations was his father’s maroon velvet jacket. That would be the maroon velvet jacket he wore every Christmas Eve when he made the cheese fondue. Now, to be honest, of course there were other more obvious differences. Michael is a WASP from Cleveland, Ohio, who went to a private all boys school whose mascot is — I’m serious — the Prepper. His family is the martini before dinner kind of family, the cruise for vacation kind of family. As an only child, he was a latch key kid while his father ran an ad agency and his mother was a buyer for fancy department stores. 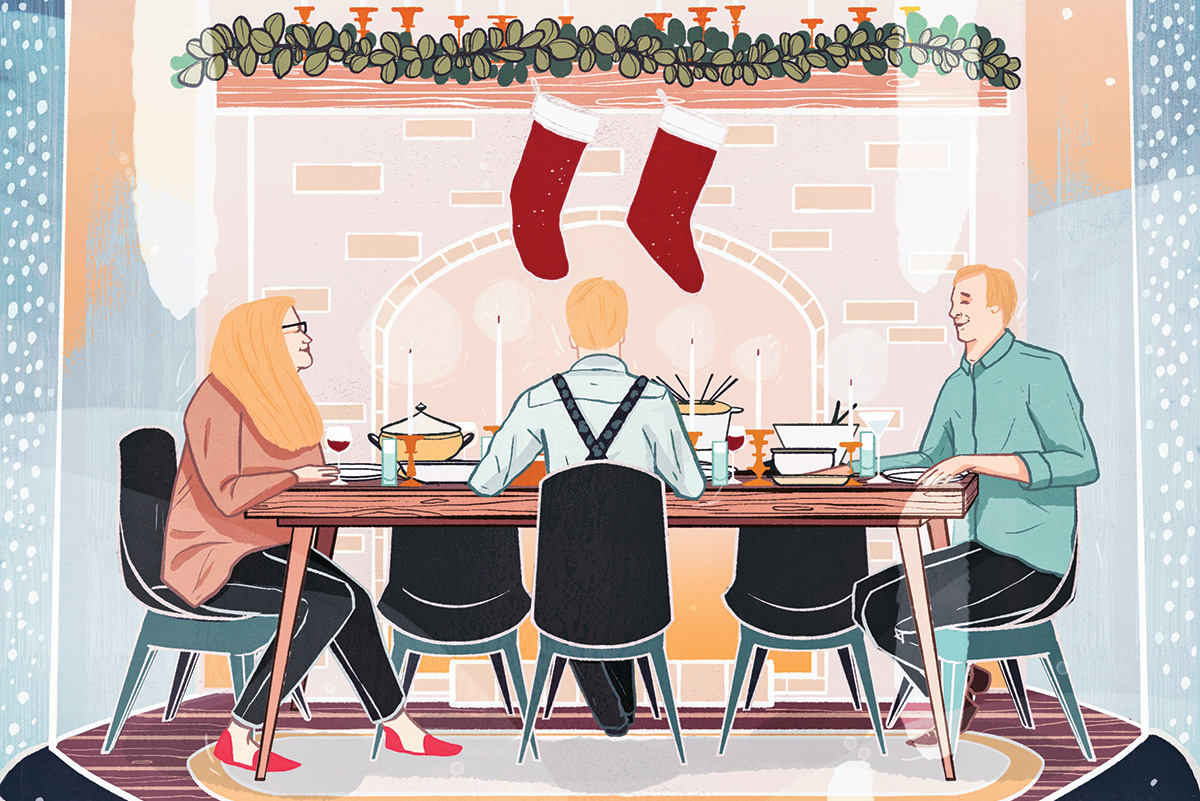 To put this in perspective, I was never alone in my house until I was in my twenties, and even then it felt weird. We always had aunts, uncles, cousins, relatives from Boston and Connecticut and Jersey City whose names I didn’t even know, great aunts and uncles, everyone loud and always eating or getting ready to eat. My Italian-American family stuck together so much that even a normal Tuesday night could have a dozen people crammed into our small kitchen, smoking cigarettes and drinking black coffee and, of course, eating.

We reached critical mass at Christmas, and not just Christmas Day but, even more importantly, Christmas Eve. At the center of all of this holiday celebration was always the food. Not just any food, but very specific food. On Christmas Eve that meant the Feast of the Seven Fishes, a nightmarish meal for a non-fish eater like me, that included marinated eel, fried smelts, snail salad, dried bacala, spaghetti with anchovies and calamari both fried and stuffed. My grandmother, Mama Rose, would serve me a plate of spaghetti, plain and stuck together, not even some butter or cheese on it, as punishment for not following our customs. I made up for it on Christmas Day when I gobbled up as much antipasto, soup with little meatballs and lasagna as I could.

The menus were always the same, unwavering, until Mama Rose died and my mother modernized Christmas Eve dinner by adding stuffies and shrimp cocktail and sauteed Nantucket scallops. When my father was alive, he wore suspenders dotted with happy Santa faces with his flannel shirt and jeans. The women wore aprons, typically splattered with red sauce. In other words, we were a heavy-duty cooking and eating clan. The idea of a dashing ad executive in a velvet maroon blazer adding kirsch to the avocado green fondue pot as Christmas carols softly played and martinis were mixed seemed like Christmas Eve in one of the old movies I so love to watch.

Isn’t new love grand though? Nothing seems to matter except the two of you staring into each other’s eyes and planning your happily ever after. Michael loved my stories of my noisy, chaotic, crowded holidays and I swooned at tales of his Christmas rib roast and merry makers visiting each other for festive cocktails and canapes. I didn’t pause to wonder how, when we became a family, we’d celebrate our own holidays. In fact, for my entire life, I never once missed Christmas — Eve and Day — with my family; never missed the dreaded seven fishes or the lasagna so heavy it took two people to carry it. During my last marriage, we raced between our large families with small children bundled into snowsuits. As those children grew up, we slowed our pace and divided our time, ultimately each of us sticking to our own clan. I see now how that was a sign of a marriage falling apart. Holidays mean together, even if eels are involved.

With that in mind, freshly engaged, we spent the holidays with my mom, Gogo, and all the remaining relatives squeezed around the kitchen table. Michael’s dad had died almost a decade earlier and his mom lived in far off Florida, so he was happy to be among this rowdy crew of mine, even though the noise levels often reached ear splitting. That Christmas Eve he made shrimp poached in butter, sitting on a heavenly mound of grits — the first Christmas Eve fish dish I’ve ever loved, until the next year when he made a lobster Newberg so rich with cream and butter and sherry and cognac that we all passed into a happy food coma until the Christmas lasagna, when we started all over again.

It was easy to imagine the rest of my life this way, the noisy relatives, the seven fishes, my handsome blue-eyed Midwestern husband spinning even my least favorite food into gold, the operatic holidays of my life entering a new act. My son, Sam, had even started wearing the Santa suspenders. And then, just like that, tragedy struck.
Just a few weeks after the lobster Newberg Christmas, Gogo had a heart attack, from which she recovered. At eighty-six, we were impressed. She’ll live to be 100, we all said or thought. Gogo was indomitable, after all. She smoked three packs of cigarettes a day, drank black coffee before bed, swore like a sailor, and spent her free time playing slot machines at casinos. When her hip replacement cracked and couldn’t be fixed, she bought a cane and hobbled to Italy and Las Vegas and, more frequently, the Warwick Mall.

Three weeks after having a stent put in, she said, “I’ve never felt better. This so-called heart attack was ridiculous.” “Mom, it wasn’t a so-called heart attack. It was a real heart attack.” “Baloney,” she said (except she used a more colorful word). So it was to my utter surprise that days later, after we had a Valentine’s lunch together, she was rushed to the ER with a bowel obstruction and died by week’s end. Even though I’ve learned the hardest, saddest way — losing my brother and my father and my own five-year-old daughter — that really no one is indomitable, I was somehow convinced Gogo would be one of those people who gets a shout out on their hundredth birthday on the “Today” show. For the first time in my lifetime, that house went silent, and then was emptied, and then, just like that, slipped away from my family after more than a hundred years of being ours.

Months passed and the holidays approached. Like blizzards and hurricanes, there’s no stopping them. Of course, I decided, I had to make the seven fishes, the lasagna and soup with little meatballs. For weeks I tried to decipher my mother’s recipes, her scribbles and contradictions. One recipe called for four eggs to be added in the ricotta for the lasagna, another called for six. There were notes, crossed out notes, illegible notes. But somehow, in the end, Christmas Eve dinner was served, with Michael’s homemade eggnog beside my father’s famous, terrible punch (Hawaiian punch, rum, frozen strawberries, sherbet floating on top).

But Christmas morning, everything started to fall apart. The lasagna was made, the soup simmering, but one by one relatives started canceling. A stomach bug, lethargy, icy roads, one disaster after another, until my husband and kids and one cousin sat pathetically, miserably in front of the world’s biggest lasagna. Later that afternoon I heard Michael on the phone with his mother, “Ann made everything,” he was saying. “It’s the first holiday I didn’t cook at all.”

That gave me pause. Surely he was remembering the fondues and rib roasts of his childhood, the Christmases when his own children were young. We both had lost families, I realized. The ones we’d built and celebrated with as parents ourselves; the ones we’d had as children. Lucky me, I’d been able to keep that one well into middle age. But now it too had come to an end. Here we are, this wonderful new husband and I, staring out at the rest of our lives together. The holidays are approaching, and I find myself wondering how they will look this year, a full year and then some after we lost Gogo and ate our giant lasagna, sad and off kilter.

Maybe Michael will make that heavenly shrimp and grits or decadent lobster Newberg for Christmas Eve. Maybe Christmas dinner will be rib roast and Yorkshire pudding. Maybe there will be cheese fondue. He told me that after velvet jackets went out of fashion, his father still donned that maroon one every Christmas Eve, like the Santa suspenders my son now wears. We don’t expect our lives to shift so dramatically at this point in time, but tragically, blessedly, they do. They are always shifting, and we are always adjusting, making way at our holiday tables for these new faces, these broken hearts, this endless, endless wonder.