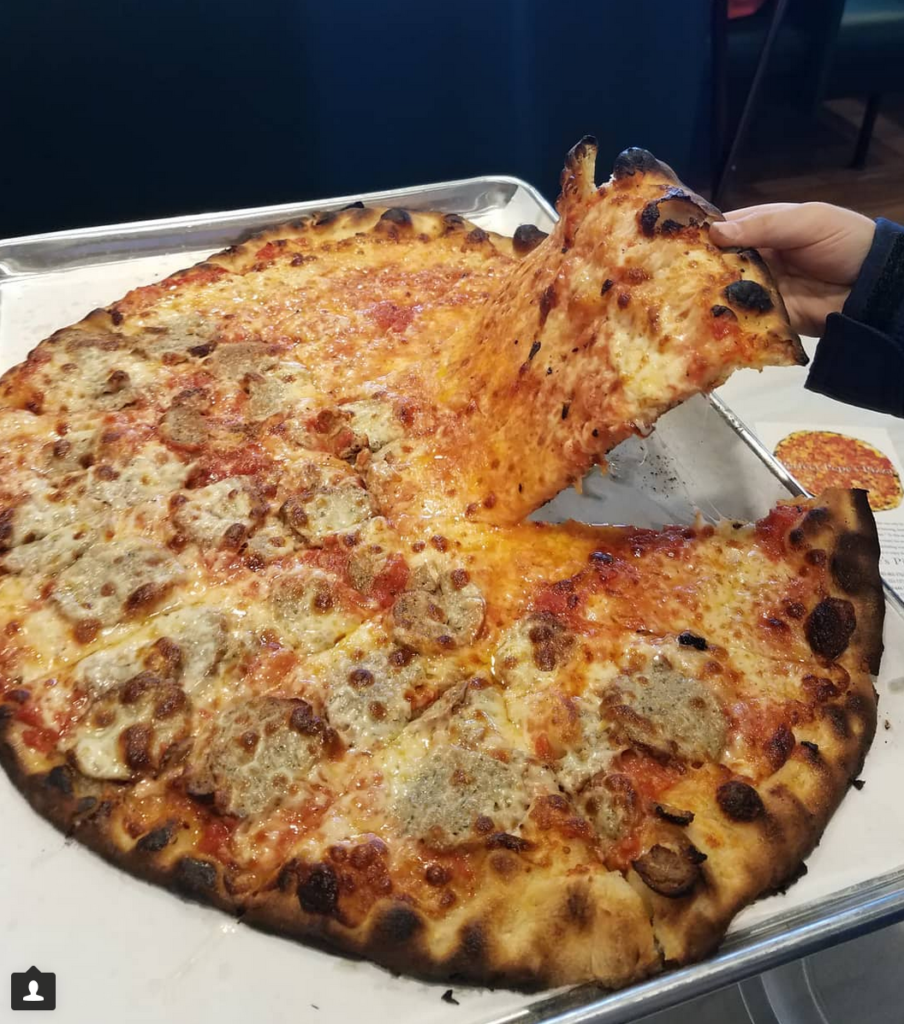 Half tomato pie with mozzarella and meatball pizza at Frank Pepe’s in Warwick.

Frank Pepe’s Pizza has arrived in Rhode Island. This past Monday, the grandson of Frank Pepe, and current co-owner of Frank Pepe Pizzeria Napoletana‘s family-owned businesses, Gary Bimonte, welcomed press to the official opening of its tenth location. Two weeks before the opening, media was also invited to the official lighting of the oven, which I attended.

Before us stood the 100,000-pound, coal-fired brick oven, which was lit with a crumpled-up paper bag from Whole Foods and hardwood to spark the flame. The 600-degree oven will go through a ton of coal a week, as does each Pepe’s location. The coal is responsible for the pizza’s crisp but slightly charred, airy crust. The oven itself is a recreation of the original masterpiece in the New Haven location. It has the same white subway tile and antique-looking cast iron embellishments as the first, except it’s a replica made with modern materials. 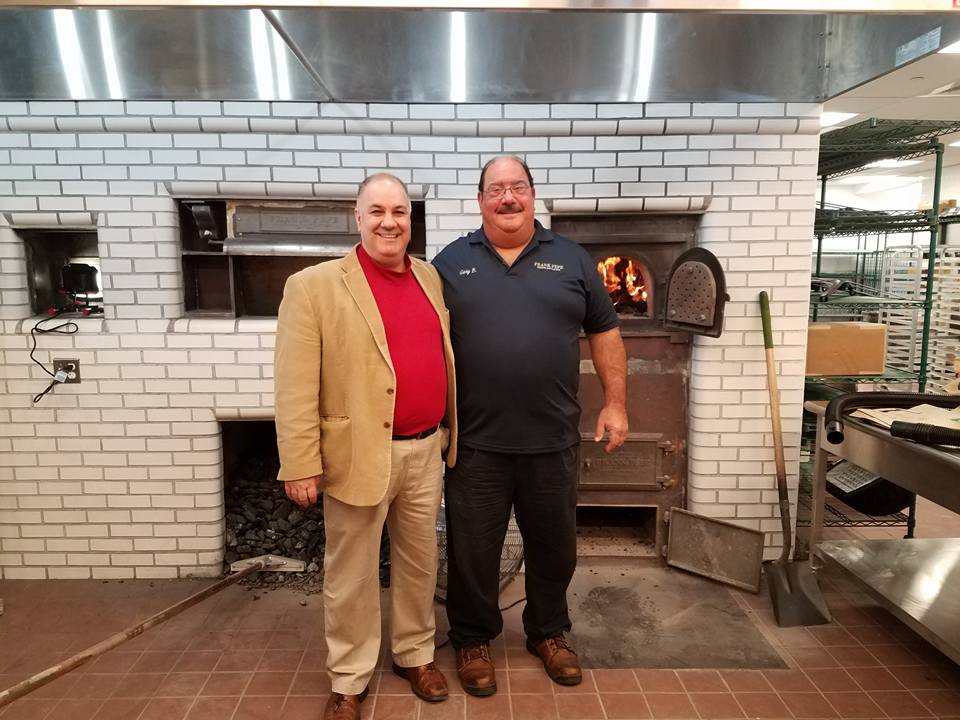 Mark Turcio and Gary Bimonte at the blessing of the oven at Frank Pepe’s Pizza in Warwick.

Along with the official lighting, the ovens are also blessed with holy water. Pastor Mark Turcio from the Goshen Hill Church in Lebanon, Connecticut, has been on hand for the blessings of all of the ovens at the locations, except one. He grew up going to Frank Pepe’s in New Haven as a kid when he used to sneak out of school for lunch to go see his Uncle Joe who worked there. He would have an anchovy and olive oil pizza for lunch and return to school with sauce on his shirt as evidence.

Bimonte explained the process of seasoning the oven at each location. It’s like a cast iron pan that must be prepped before you can cook with it. The oven must be lit for a month before you can use it to bake pizza (full disclosure, the oven was actually already roaring a month before this press event). When the oven is built, the bricks still have moisture in them, so the oven must burn for at least a month to dry them out. “Then we season it for a week,” Bimonte says. “Once it gets up to temperature, we’ll throw balls of lard and pork renderings in there to get a nice coat on the bricks, all over the whole deck.”

Rhode Islanders are looking forward to visiting the first Pepe’s Pizza in the state. Some people camped out the night before the official opening, as the first ten guests in line received a $100 gift card.

The clam pizza should be especially popular in the Ocean State, the home of the quahog. Pepe’s officially opened in 1925 at its original location which was called Francesco Pepe Bakery. Bimonte’s grandfather moved to a larger location in 1936, and named it Frank Pepe Pizzeria Napoletana, which is what it is named today. Back then, it was located next to a clam cart. “There was a gentleman out there selling clams on the half shell,” Bimonte says. “And when my grandfather moved to the location, the guy came over, and said, ‘why don’t you put these on the pizza?,’ and he did.”

Now the white pizza with freshly shucked clams, grated cheese, olive oil, fresh garlic and oregano is one of the most famous varieties of Pepe’s Pizza. The original tomato pie is also a must.

Now, let us go back to the blessing of the oven. The flame is lit and Turcio stands before the dancing flames, splashing holy water from a tiny bottle all over the brick oven. “Gracious god, you blessed Frank Pepe with such a taste with a sauce and a beautiful pie, and lord, this the fourth state that people are going to be able to enjoy this pizza,” says Turcio. “I just pray that you bless the people who make it, and bless the patrons who will be coming in, so this taste will extend through all the land, and lord again, we thank you for the wonderful taste, and the vision you gave Frank Pepe, because more and more people are experiencing it. And in his name, Amen.”

“The clam in Rhode Island is going to be the biggest success,” Turcio continues. “I’ll make sure I am up here for the first one.”