An Interview with our Favorite Letter-Writer, Felicia Nimue Ackerman

The philosophy professor has a thing for words and cats.

On the first floor of Brown University’s Corliss-Brackett House, where her office is located, there’s a photo of her cat, Palomides, in place of her own portrait on staff composite. The cat is named after a character in a favorite book, Sir Thomas Malory’s Le Morte d’Arthur, and Felicia Nimue is a self-given double first name, the second part of which also stems from her love of the same book. Felicia was the middle name given to her by her parents. 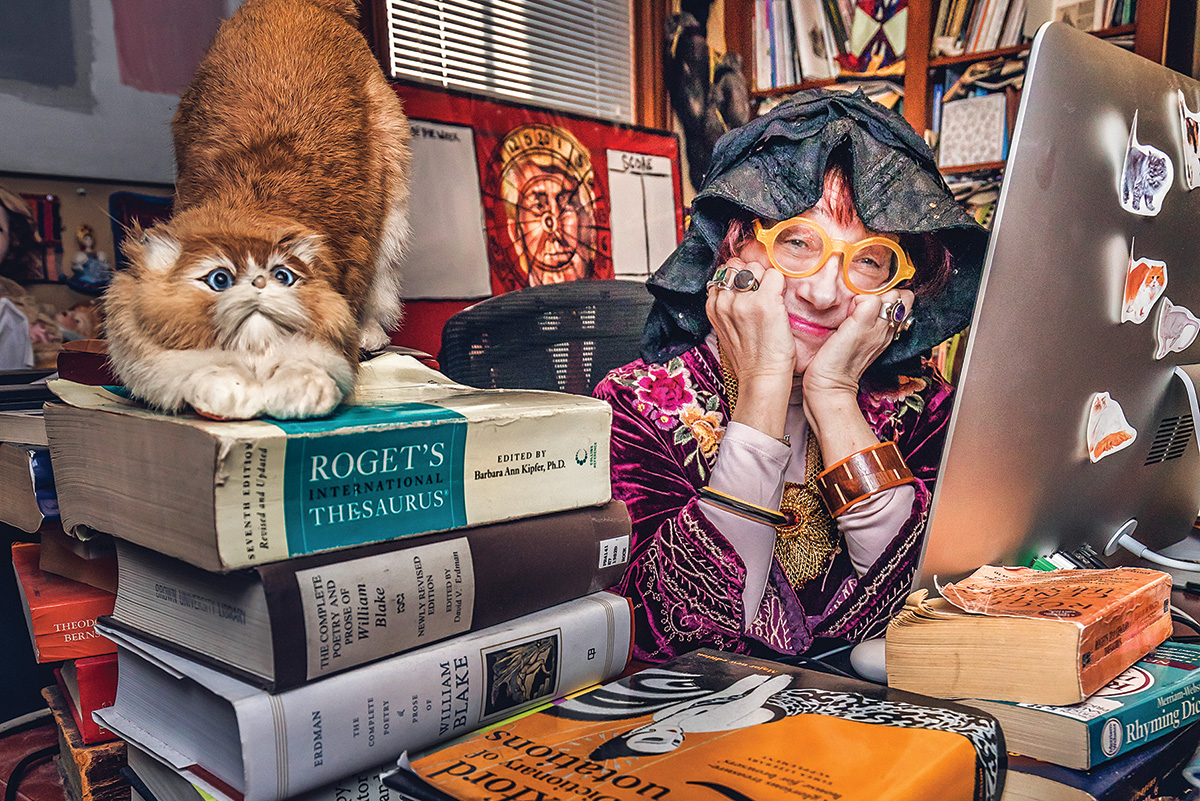 Ackerman is a legend herself for having had an estimated 300 letters to the editor published in the New York Times alone, as well as other letters published in the Providence Journal (where she also writes an op-ed column), the Boston Globe, Wall Street Journal, Harper’s, the Atlantic and more. She says only a low percentage of her letters actually make the cut into print, and that fewer than 5 percent of the letters received by the Times appear in the section. “This is not a hobby for someone who can’t take rejection,” Ackerman says.

The views she tends to write about most are that physician-assisted suicide should either be legal for all competent adults or illegal for everyone, the stigmatization of fat people, LGBTQA and “old-people’s rights” and “nanny state” restrictions such as the soda tax, among others.

Inside her cluttered but curated office, a portrait of Donald Trump sits behind her desk fashioned into a dartboard, and anyone who shares her opinion of the current president is invited to take a shot. Those who disagree with her opinion are invited to argue.

On this day, she dons a black lacy bonnet, red-rimmed spectacles, a tunic embellished with colorful embroidery, a Middle Eastern-inspired necklace, five rings on her hands and red lipstick and blue eyeshadow. Cat-themed artwork and knickknacks dominate jam-packed bookshelves stacked with literature and piles of magazines and newspapers, many of them stuffed with clippings of Ackerman’s published letters. There are kitty watercolor paintings by artist Sara Ann Ketchum, Latin American dioramas starring cats, and even lifelike stuffed cats that are not, in fact, taxidermy. Even the original fireplace in her office, where she moved in 2012, has cat faces carved into the mantel (“I told them if I didn’t get this office, the cats would bite the others”). Surprisingly, she only has one seventeen-year-old longhaired feline at home.

“I practice serial catogamy,” Ackerman says, confirming that she made up the word. She prefers to have her feline companion’s attention to herself, rather than share with another cat.

According to “Behind the Name,” Nimue is derived from the name of a sorceress in Arthurian legends. And enchanting is just the way to describe her personality. She talks quickly and carefully but is not afraid to put someone in their place. She changed her eating habits to promote long life, and hopes to survive past 100 years. She eats “boringly and wholesomely” most of the time, but will indulge once every two weeks, especially on dessert. “I love to eat buttercream frosting like pudding,” she says. Alas, she must wait for cheat day. “I decided that quantity of life was more important than quality,” she says.