A Timeline of the Fight For Coastal Access in Rhode Island

Rhode Island beachgoers and waterfront landowners have a long history of battling it out over shoreline access boundaries. 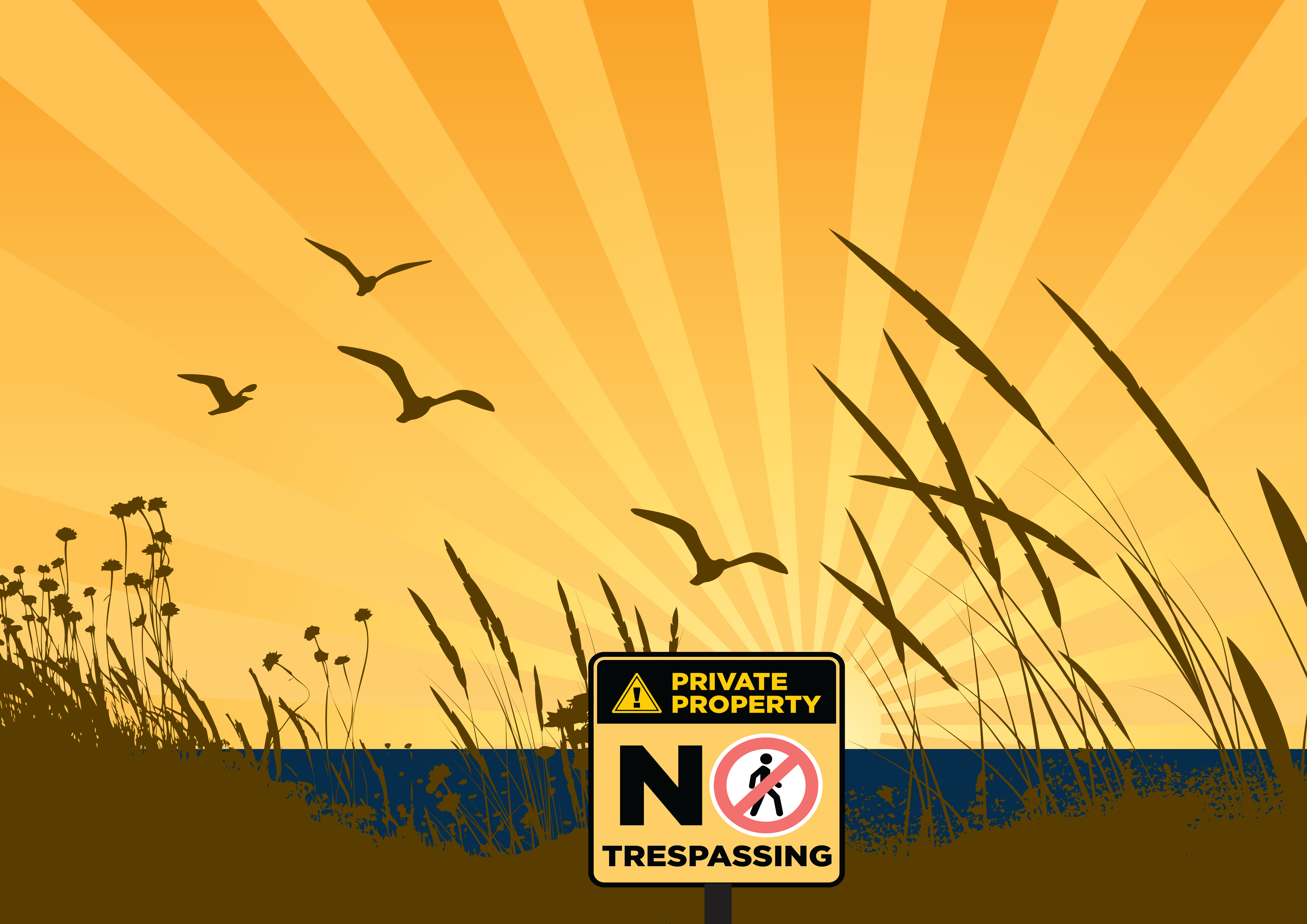 In 1663, King Charles II’s royal charter granted the citizens of Providence Plantations the right to freely fish. In 1842, the authors of the state’s first constitution phrased this right as “privileges of the shore.” Nearly 150 years later, a constitutional convention specified those privileges as “including but not limited to fishing from the shore, the gathering of seaweed, leaving the shore to swim in the sea and passage along the shore.” But increasingly, the weight of these words has been inadequate to carry a determined beachgoer over the obstacle of a waterfront landowner. So, the war for the shore has run hot on the sands and cold in the courtroom as the meaning of this right has been debated.

In the late 1970s, a skirmish broke out in Westerly between Wilfred Kay, whose home fronted Misquamicut Beach, and the Rhode Island Mobile Sportfishermen Club, whose members liked to surf-cast there. Kay was a prominent citizen and business owner who vehemently objected to the presence of their vehicles, which he contended destroyed the dunes. Kay had drawn a literal line in the sand, marking his property bounds with a series of stakes on the beach. In 1976, Kay brought the matter to the Town Council, which permitted vehicles on the beach but limited access during the summer season. The fishermen argued that Mother Nature was shifting the coastline, and at least one member had a Coastal Resources Management Council permit to bring his truck onto the sand.

In September 1977, six club members picked up trash on the town beaches during their annual cleanup. Kay summoned the Westerly police, who arrested the six men for trespassing. The case went to District Court; the CRMC intervened, concerned about the impact of one trespassing case on the entire state’s constitutional rights. Meanwhile, the feud simmered. The following fall, Dick Morris, a Connecticut fisherman, called the police on Kay, alleging that he grabbed a fishing rod from the back of his truck and threw it through the windshield. Kay countered that Morris had knocked him to the ground with his vehicle; he returned fire, filing a trespassing complaint against Morris.

The disposition of the malicious mischief charge against Kay could not be found in The Providence Journal archives. What happened to the fishermen became a legal precedent that defines the battles of today. In February 1979, a District Court judge found the six guilty and fined them $10. In December 1980, Superior Court Judge Albert E. DeRobbio dismissed the charges, ruling that the public’s constitutional right of access extended to the high-water mark along the shore. In 1982, the Rhode Island Supreme Court took up the State v. Ibbison — so named for fisherman James Ibbison III. The court ruled that the mean high tide point — a vertical measurement averaged over 18.3 years, fixed and underwater most of the time — and not the high-water mark — the visible and changeable line of seaweed along the beach — was the boundary between public and private property.

“The issue takes two shapes,” says Leah Feldman, a CRMC coastal policy analyst. “There is perpendicular access — getting people to the shoreline from the upland area, via rights of way — and the slightly more contested issue of lateral access. Once you’re there, how much of the shore are you within your rights to access? Where is the line where private property ends and public trust land begins? That is a much more complicated question.”

For much of the state’s history, the shoreline was an undeveloped landscape of farms, small summer colonies and fishing villages, offering few opportunities for conflict. But the late 1970s saw an unprecedented wave of new construction on the shoreline. Populations in coastal communities expanded by as much as 70 percent, even as they remained stable elsewhere in the state. The restive era of COVID brought Rhode Islanders in search of outdoor recreation and out-of-towners looking for a retreat from the cities in a seeming competition for a limited resource.  The constraints set by Ibbison have begun to chafe, and a coalition of anglers, surfers, birders and beachgoers has been pushing back.

“Once you’re there, how much of the shore are you within your rights to access? Where is the line where private property ends and public trust land begins? That is a much more complicated question.”  —Leah Feldman

These confrontations have ranged from the uncomfortable to the actionable. Laura Kelly of South Kingstown defied a mild-mannered gatekeeper’s insistence that she sign a visitor’s book to spend an afternoon last summer on Lloyd’s Beach in Little Compton. This unspoiled patch on Sakonnet Point, behind a chain link fence and a “For Little Compton Residents Only” sign, has passed through many hands under an evolving set of conditions that has resulted in disputes over who exactly can access it.

“It’s kind of sad. It’s not a place families would want to go — there’s no facilities. And it’s so far out not a lot of people go anyway,” she says. “Part of it is preserved by the Nature Conservancy and part of the land is town-owned. Yet, the private association monitors who goes in and out. That’s messed up.”

In June 2019, Charlestown resident and shoreline rights advocate Scott Keeley dared a private security guard on a South Kingstown beach to stop him as he stuffed seaweed in a bag. The guard called the police, who arrested Keeley and charged him with trespassing. By December, the town dropped the charge and expunged the record, and the town’s insurer awarded Keeley a $25,000 settlement for false arrest.

This spring, a twelve-member commission established by the House of Representatives to study lateral access is expected to report its findings. The Shoreline Study Commission is the outgrowth of a failed bill, sponsored by state Rep. Terri Cortvriend (D-Portsmouth, Middletown) and Blake Filippi (R-New Shoreham, Charlestown, South Kingstown, Westerly), to protect beachgoers within ten feet of the most recent high tide line from trespassing charges. Cortvriend became interested in the issue as she began to dig into the impacts of sea level rise. >>

“Who is going to lose as the sea comes up the beach? Does the public lose that right?” she asks. “We can’t change that ‘mean high tide’ because the court’s decision says people own to the mean high tide line. So, there’s a conflict in what the property owners think they own and our constitution. It’s like threading the needle with language that clarifies where the public can be, while not having it be considered a taking. That’s the hurdle.”

The clash of the centuries-old public trust lands doctrine and more recent property law has sent lawyers armed with magnifying lenses and tweezers to pick through case law and common law for intent and the plain meaning of English words. This renewed attention has not really clarified much.

Sean Lyness of New England Law Boston, who made a presentation about the Public Trust Doctrine before the commission, believes that Ibbison was wrongly decided and left the promises enshrined in the state constitution unfulfilled.

“It’s just one case in a common law system — but it is monumentally significant, and it casts a long shadow over Public Trust Doctrine and shoreline access. It’s my opinion the General Assembly and the state of Rhode Island thought the court got it wrong and the changes in the 1986 constitutional convention can been seen as a real response to that.”

Providence real estate attorney John Boehnert, who also testified, argues just as persuasively that the Ibbison decision was entirely correct and well supported by a chain of decisions. Any legislative attempt to change it would lead to “a challenge to it as a taking and there would be litigation.”

The fight for perpendicular access is no less intense. The CRMC has 230 designated public access points, but increasingly, they are under assault from sea level rise and erosion in the wake of more intense storms, says David Prescott, Save the Bay’s South County coastkeeper.

“The General Assembly has always wanted to have one shore access point per mile, but looking at 400-plus miles of coastline, we are barely halfway there,” he says. “They are getting challenged from the land side. A lot of these access points will be underwater by the end of the century.”

The more immediate threat, say advocates, are adjacent homeowners who discourage visitors with “Private Property” signs and shrubs planted in the middle of an access point. Conrad Ferla, a South Kingstown surfer, entered the fray a couple of years ago after “No Parking” signs began to pop up on a Narragansett street surfers had long used to access a prime spot off Point Judith.

“The first thing they do is remove parking — that’s the back-door way to remove public access,” says Ferla. “The anti-public access crowd has a lot of money, but they don’t vote here. Our access points to the beach are being stolen from us left and right. People need to be aware of it and we’re going to fight our hardest, because it’s super important and it is solvable for one reason: [the issue] is incredibly popular.”

Advocates are now organized under a burgeoning Facebook group, Saving RI Coastal Access/Rights of Way, with nearly 4,000 members. Some towns, such as Jamestown, Westerly and Narragansett, have begun to respond by restoring parking and forming committees to parse land records and maintenance practices to re-establish and mark public rights of way. Narragansett also lowered the town beach fees for nonresidents.

“The demographics of the town have changed in the last fifteen years, and in certain areas there’s a feeling of exclusivity,” says Narragansett Town Councilman Jesse Pugh. “But we will try to continue to be as welcoming a community as possible and make the coast as accessible as possible.”

Cortvriend hopes that the committee’s work will educate the public and produce a tweaked bill that will find support on Smith Hill. Keeley can live with that.

“It’s a solid step forward,” says Keeley. You don’t climb a mountain by leaps, you climb a mountain by placing your foot in such a way that you don’t fall off the mountain. We’ll see how this plays out. If they reinterpret the constitution, our only recourse will be civil disobedience.”