Brookie the Trout, and her humans from the Woonasquatucket River Watershed Council, are traveling the state teaching kids about wildlife and climate change. 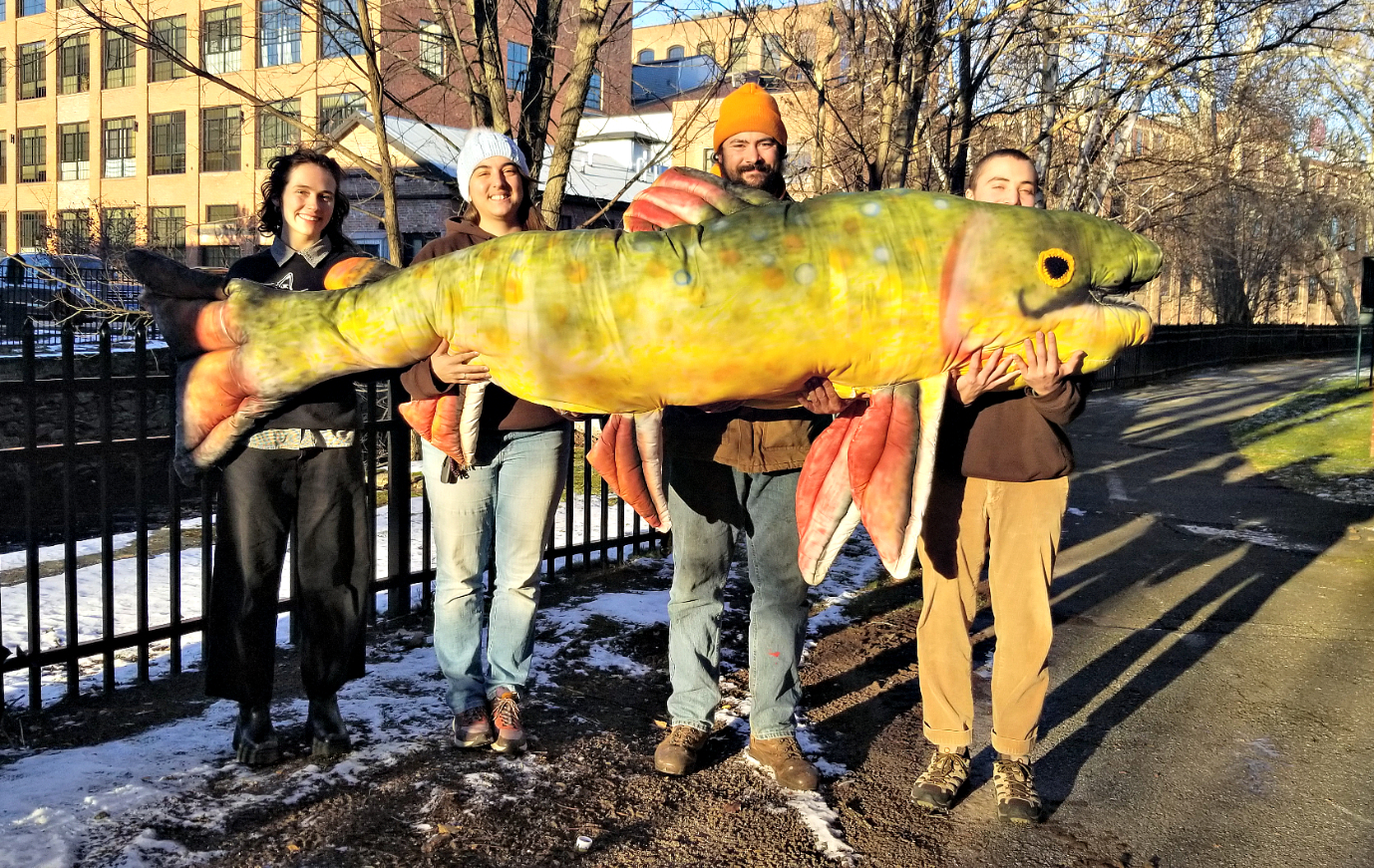 What’s the strangest day you’ve ever had on the job?

For Jacob Gorke, it might just be the day he was asked to create a seven-foot stuffed brook trout for the Woonasquatucket River Watershed Council.

The trout is part of the organization’s environmental education programs to teach kids about the Woonasquatucket River and surrounding waterways. Amanda Peavey, WRWC education director, had the idea while working with kids in the organization’s Fish in the Classroom program. The fourth-grade program typically includes a lesson where students dissect brook trout to learn about their different parts.

“We were finding that the little kiddos when they used to do fish dissections with actual fish — some kids were OK with it, some weren’t. And that’s totally understandable,” she says.

Instead, she came up with the idea to use a stuffed model. She turned to Gorke, a former art student and muralist who now works as WRWC’s greenway manager. Gorke previously worked at Jerry’s Artarama and had experience sewing custom fishing bags, but he’d never worked on anything like this.

“It did take a considerable amount of time,” he says. “Probably close to four days. Maybe 36 hours’ worth of work, start to finish.”

He started by purchasing fabric at Lorraine Fabrics in Pawtucket, then borrowed an airbrush from a friend to paint the fish’s exterior. Brookie, as she’s affectionately known, has markings consistent with a female brook trout. She made her classroom debut last spring — Gorke finished creating her in early March, making her, appropriately, a Pisces on the zodiac.

“Kids love to just pose with her and put their head in her mouth,” Peavey says. “They get so excited because it’s just this giant plush fish.” 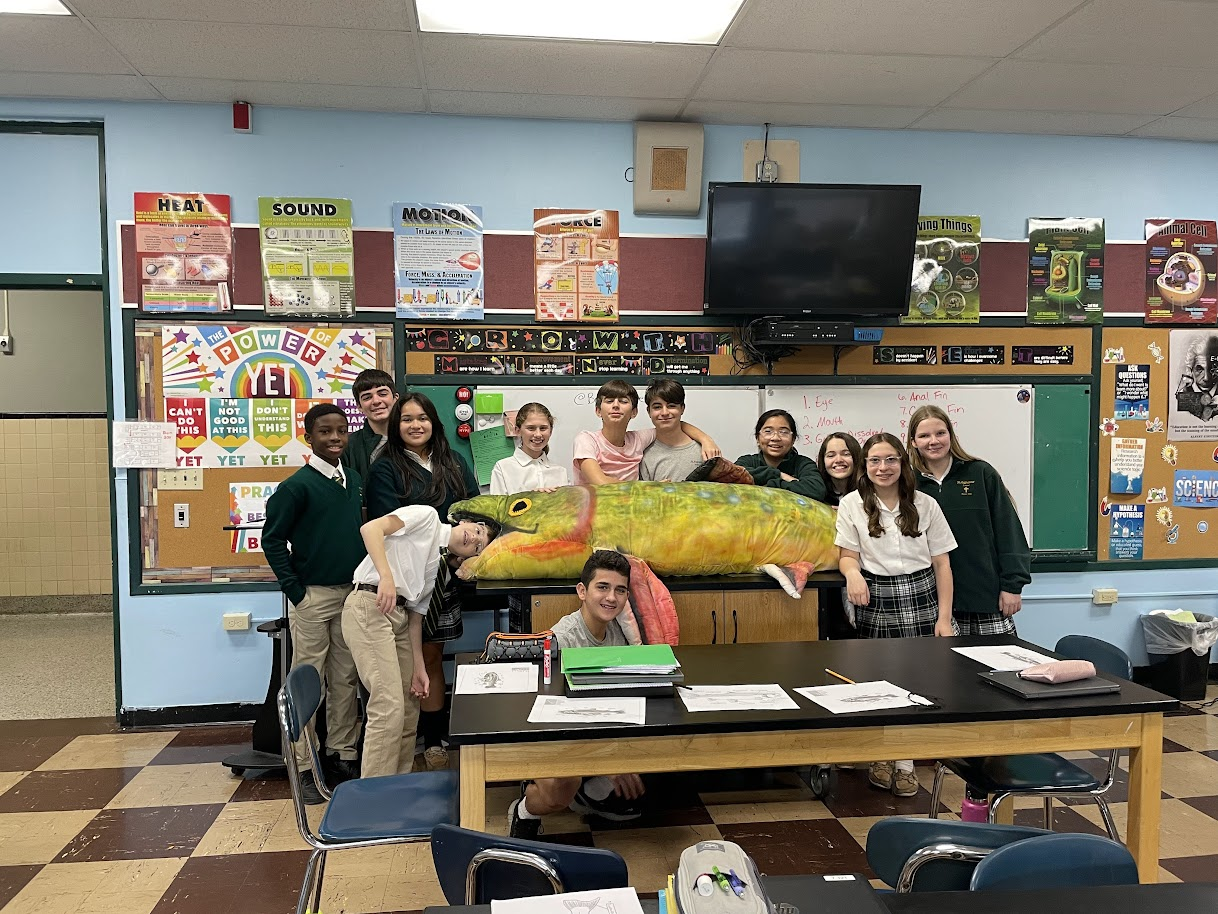 Aside from the shock value of having a seven-foot fish in the classroom, Brookie holds educational value for the organization’s programs. Peavey, who learned to crochet from her mémère (read: grandmother, for the non-French Canadians out there), crocheted a full set of internal organs to remove from a zippered pouch during lessons. In addition to a kidney and swim bladder, Brookie contains plastic beads to teach kids about microplastics and the importance of keeping pollution out of the river.

“It’s really nice to be able to talk about these gross things in an environment that makes them comfortable,” Peavey says.

While it might seem like a lot of effort for a classroom tool, it’s all part of an ongoing goal of educating the next generation of environmental advocates. The organization works with five elementary schools within the river’s watershed and runs after-school programs for middle and high school students. The Fish in the Classroom program, which runs at the fourth-grade level, involves raising brook trout in the classroom and releasing them into the Woonasquatucket River in partnership with the Rhode Island Department of Environmental Management. Other programs get kids outside in nature where they can participate in canoeing or play games along the river’s edge.

“It’s a really cool opportunity to do something so freeing as being out in nature and running and laughing,” says Zackery Sequeira, who works as a WRWC youth education coordinator through TerraCorps.

Plus, there’s always the fun of bringing Brookie out into the community, where she tends to draw attention at local events.

“If there’s really young kids, sometimes they can’t tell if she’s a real fish or not,” says Ella Ackerman, a WRWC environmental educator.

According to Gorke, brook trout were once common in the rivers and streams of the Eastern United States, but are now found only in certain parts of the Woonasquatucket due to the warming waters and presence of dams that prevent their natural spawning cycle. Brook trout, he says, thrive in temperatures around 55 degrees, so it’s best to catch and release them recreationally in the fall when they’re not already stressed from the summer heat. Environmental supporters can also plant trees along the water’s edge to help cool the river.

“As we start to see climate change have an effect on our oceans, rivers and streams, you see the numbers of brook trout actually decline. There’s all kinds of restoration efforts throughout the state and the country that are designed to help them out with habitat,” he says.

(source: National Wildlife Federation and the educators of the WRWC) 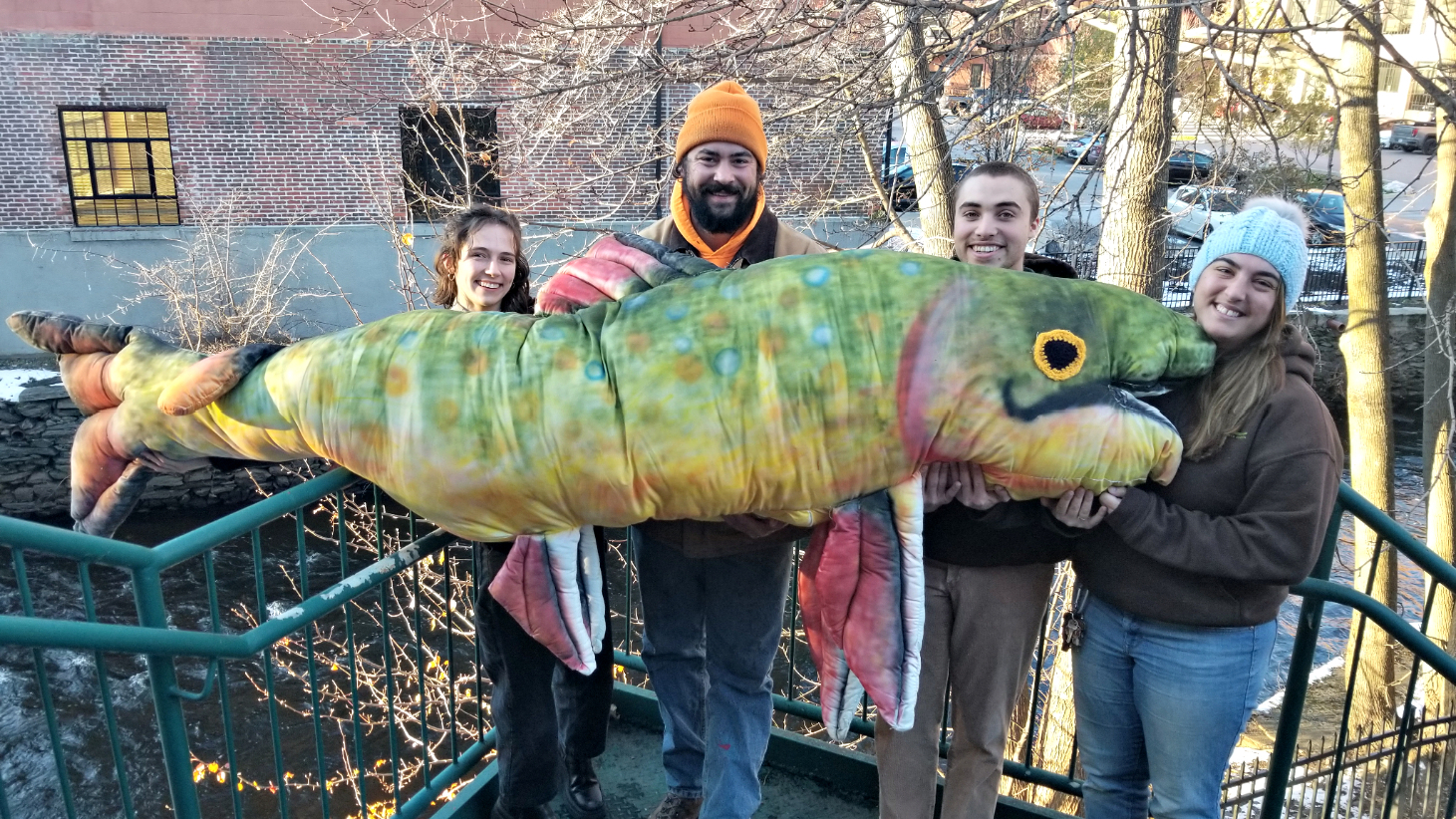 Another view of Brookie and the team with the Woonasquatucket River in the background. (Photo by Lauren Clem)