Here are fifteen takeaways from one of Rhode Island’s biggest summer events. 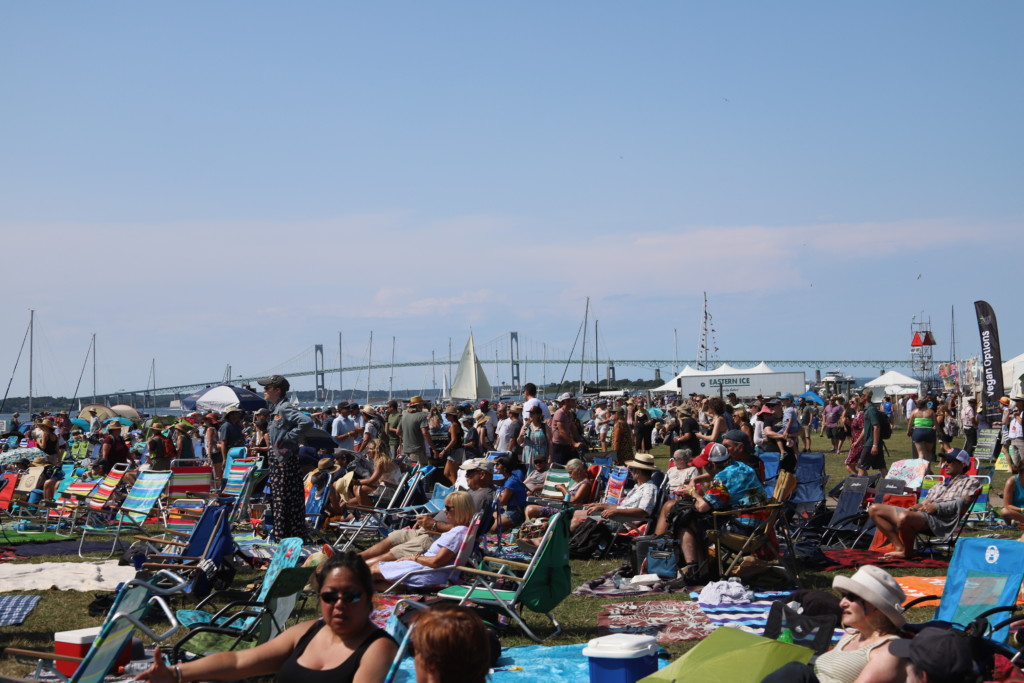 I’ll be the first to admit that I am neither an experienced music festival attendee nor a folk aficionado (though I have dipped my toes in the genre, thanks to my 2010s-era obsession with Mumford and Sons — oh, to have caught last year’s fest), but I’d like to think my recent venture to the 2019 Newport Folk Fest taught me a thing or two. If you’re hoping to attend next year for the first time – if so, maybe bookmark this page now — here’s my newbie take.

The sun was high in the cloudless sky on Saturday when my photographer friend and I finally reached Fort Adams after a forty-five minute (!) ride from tourist-heavy Narragansett to tourist-heavier Newport. This is when I learned my first Newport Folk Fest lesson: Plan to leave the house early and then actually leave thirty minutes prior to then.

Luckily, the first act we really wanted to see wasn’t set to play until around 3 p.m., so our midday arrival allowed us plenty of time. After parking on the Fort grounds (which inspired lessons number two: pay for parking ahead of time for a cheaper price, and three: if you ignored lesson two, have cash on hand as the attendants won’t accept cards and neither will many vendors – though you can access an ATM in the Fort’s gift shop), we decided to forgo the shuttle service in order to enjoy the scenic, fifteen minute trek instead. Lesson four: Though the bayside route graced us with cool breezes, it did not prevent the sun from bearing down, so come prepared with sunscreen and a floppy, wide-brimmed hat (believe me, you’ll fit right in with the aesthetic). 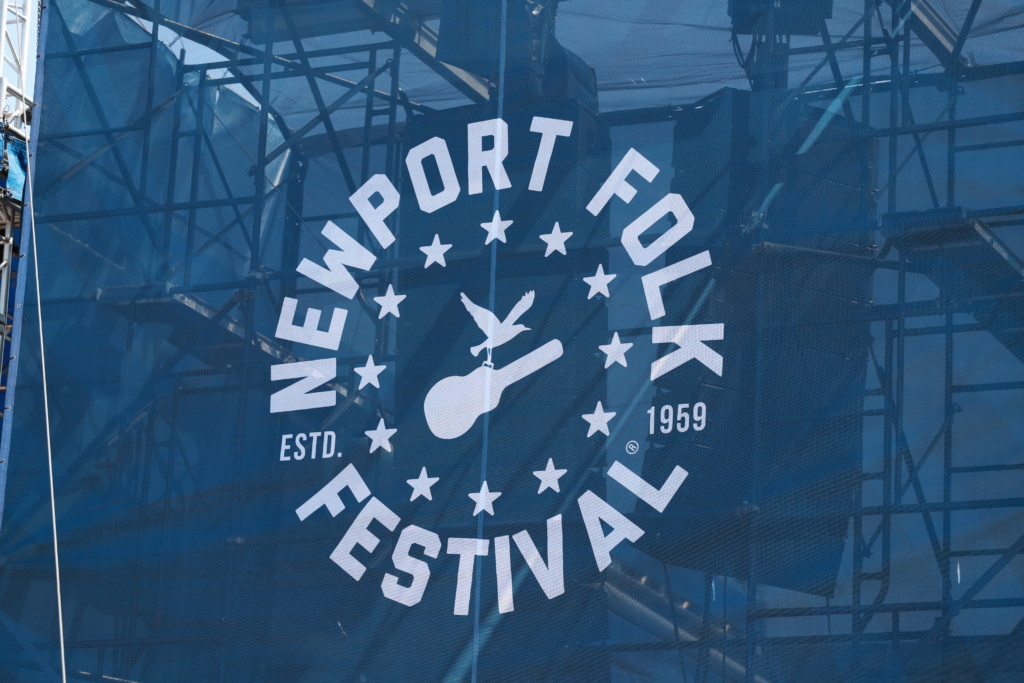 Being the second — and supposedly less high-profile — day of the festival, the will call line was blissfully empty. We grabbed our tickets, breezed through security with our shoulder bags (hers holding a camera, mine holding the aforementioned sunscreen and some gum) and then immediately beelined for the bathrooms. Lesson five: While there are more than enough porta potties sprinkled throughout the grounds, the main building has bathrooms for those of us with shy bladders.

From there, we decided to peruse the various vendors that bordered the fort’s walls. Bobbing our heads along to the melodies floating through the open air from the nearby Harbor Stage, we admired signage from Ocean State of Mind, adorable handprinted wallets from Shara Porter, distinctive jewelry from Tommy Conch Designs. Lesson six: don’t be surprised if you pick up a few trinkets for yourself. We then scoped out the stages: Harbor stage was near the entrance and had an intimate setup; Quad stage was tented and placed near some of our favorite food trucks; and Fort stage was huge, overlooking the water and flanked by hundreds of attendees, most of whom came with their own lawn chairs and blankets (lesson seven: if you get to the fort right when it opens, you have a better chance of snagging a spot in front of the Fort Stage and setting up a home base for the day). 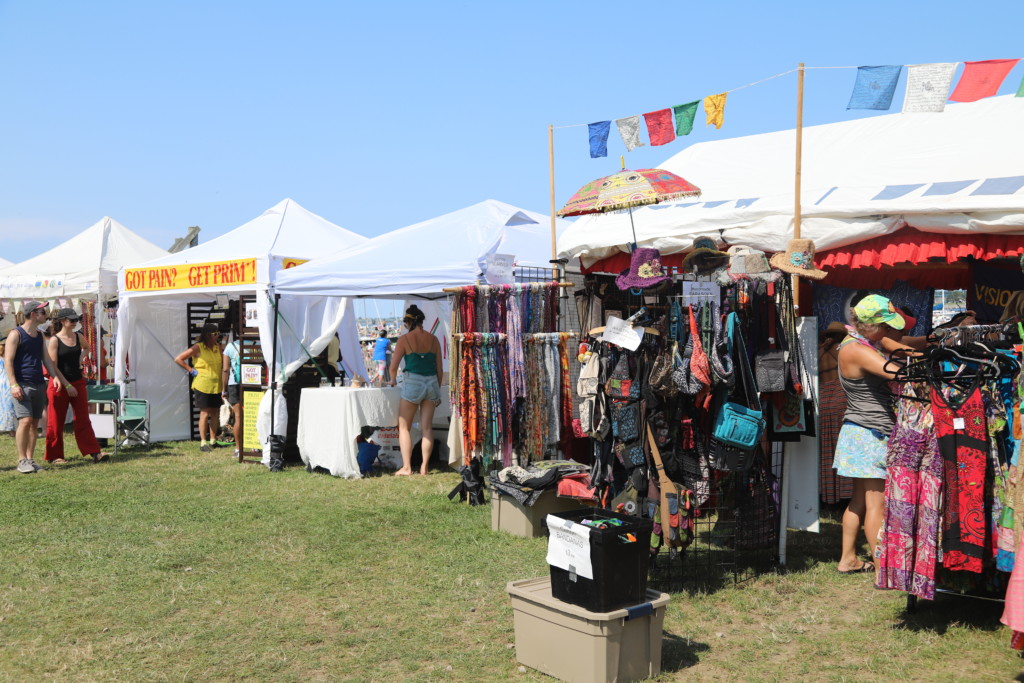 With another hour to go before our desired act would take the main stage, our rumbling stomachs lead us back to the Quad. We first grabbed a Del’s— because is it a true Rhode Island summer outing if there’s no Del’s involved? — and then got in line for a favorite standby, Tallulah’s Taqueria. I was initially bummed to learn that they couldn’t make any modifications to their burrito offerings (darn tomato sauce allergy) due to the onslaught of orders, but I was glad that it forced me to try something new. I ended up at the Newport Crepe Company station next door and their spinach and goat cheese crepe was chef’s kiss delish.

We then scored a picnic table and enjoyed a few alternative songs by Rayland Baxter. Lesson eight: While it is called the Folk Fest, I noticed that many of the acts weren’t all purely “folk,” but rather folk-influenced. I people-watched while I listened, observing parents balancing toddlers on their shoulders, older folks swaying in tempo to the music and teenagers not-so-inconspicuously passing a vape pen between them in a circle on the grass. Lesson nine: It’s an event for all.

Next, we made our way over to the Fort stage, catching a few notes by Ruston Kelly, Kacey Musgraves’ (a Friday headliner) husband, along the way. We make it just in time to watch the artist we’ve been waiting for, Maggie Rogers, approach the mic wearing a bright red number. It perfectly complemented her more upbeat yet still soulful sound. While other acts I encountered that day had more of a singer-songwriter vibe, Rogers worked the crowd and encouraged even the more stationary attendees get up and move to the music. She was mesmerizing, both in sound and performance, even from my position far from the stage. Lesson ten: The fort’s acoustics are mind blowing and there isn’t a bad “seat” in the house. 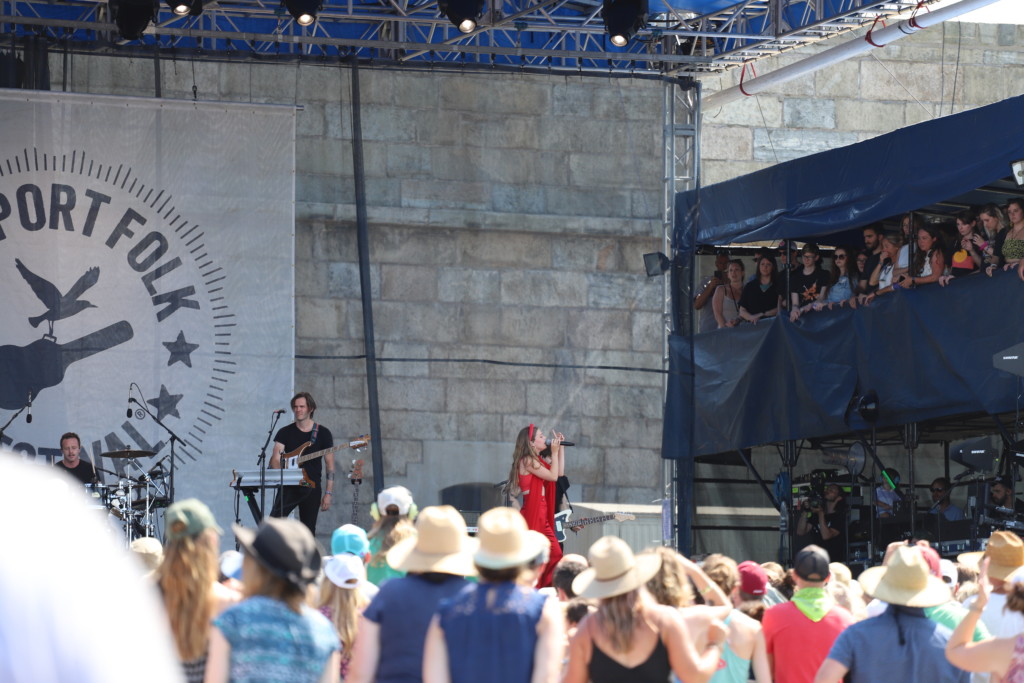 After a few songs, we decided some libations would do us some good. We ventured to the twenty-one and older section in the back (lesson eleven: the alcohol vendors require tokens — one token is $8 and will earn you one beverage) and I got myself a Shacksbury Rosé Cider to sip on for the remainder of Rogers’ set. Many a boater was anchored in the waters next to us, unabashedly enjoying the show, which brings me to lesson twelve: consider investing in a boat, or a friendship that can produce a boat for such an opportunity. I also took that time to admire the surrounding fashions. Where Coachella brings colors and glitter, the Folk Fest brings not only long skirts, white lace and floppy wide-brimmed hats but also your standard casual summer wear. Lesson thirteen: All fashion goes at the Folk Fest, so don’t stress (like me) over finding a Bohemian-passing outfit. 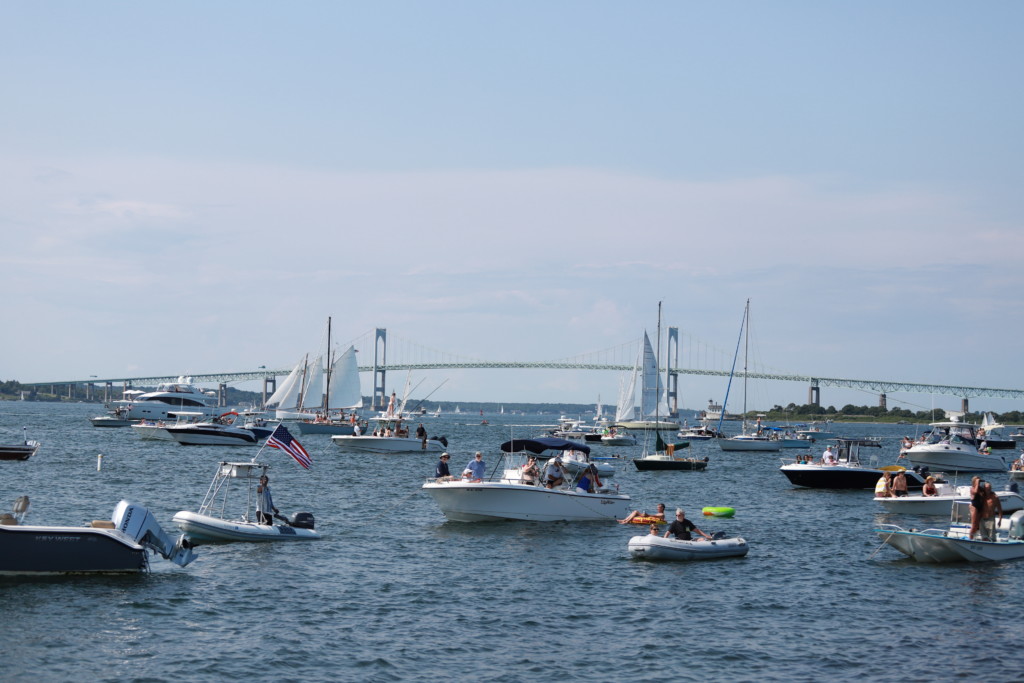 Rogers eventually bowed out to a standing ovation of thunderous hoots and hollers before being replaced by Jeff Tweedy. He mellowed the atmosphere out a bit with his crooning voice and even previewed a brand-new, impassioned song.

We then headed over to the Harbor Stage one last time. While we waited for the next act, Mountain Man, my friend and I remarked how we thought we had heard of him before. When three young women took the stage instead of the shaggy haired man we had pictured, it was clear we hadn’t. Mountain Man then surprised us yet again by unleashing angelic harmonies that awed onlookers into complete silence. I got chills, and not just because the sun had begun its descent. Lesson fourteen: There’s a good chance you’ll leave the festival with a brand-new artist to add to your Spotify. 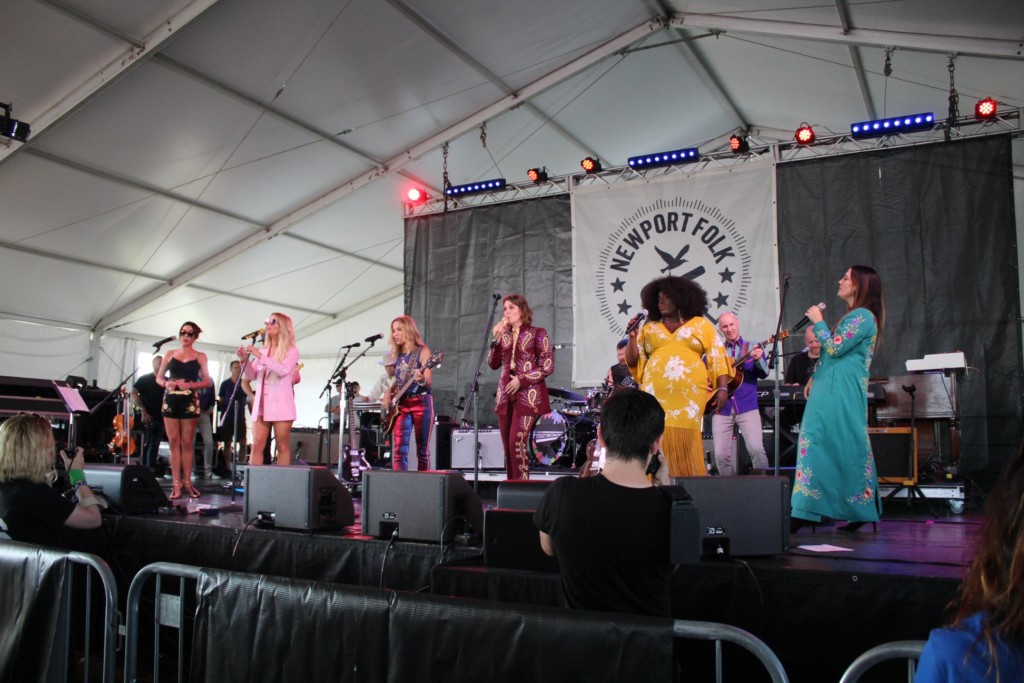 And I’m sorry to say, this is when we did, in fact, leave. It’s also when I learned my most important lesson: Do not, under any circumstances, make dinner plans outside of the festival and opt to skip the final performance of the day – especially when the act has a mysterious name like “♀️♀️♀️♀️: the collaboration.”

If you do, you might just miss a surprise, a history-making performance by Dolly freaking Parton. 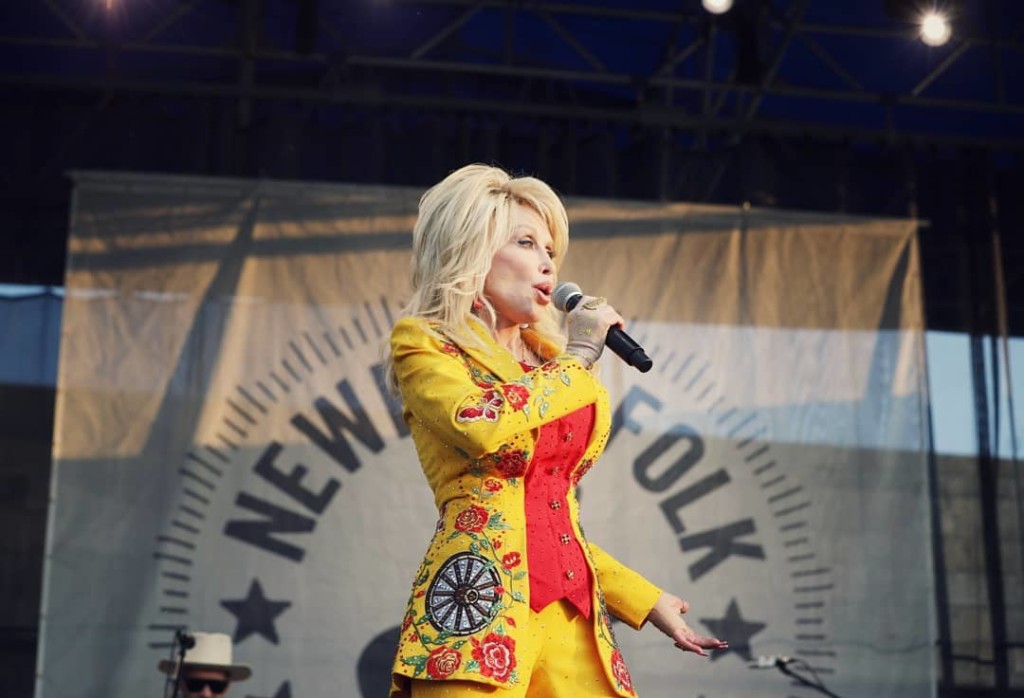