Newport Folk: An Ode to the Unannounced Set 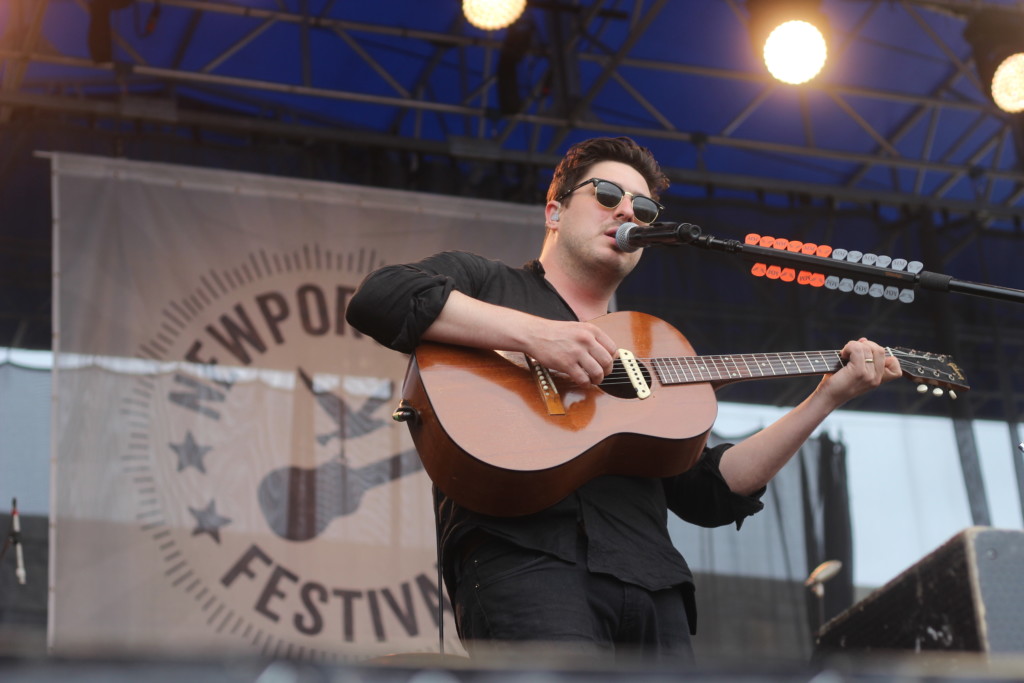 Marcus Mumford of Mumford and Sons. Photography by Joshua Aromin

“What about Bob Dylan? Or Neil Young? Or James Taylor? Paul Simon, maybe?”

It’s Saturday at noon and, although we’ve only just arrived at Fort Adams in Newport, my photographer buddy, Josh Aromin, and I have already batted around dozens of potential artists that might fill the unannounced headlining spot at the Newport Folk Festival. We bop to a set by Daniel Norgren on the Harbor Stage, but we can’t help ourselves.

We stumble into Sandy McGee of portsmouthpress.com, who says she saw a tweet that claimed Marcus Mumford of Mumford and Sons was pumping gas in Newport on Friday. After a bit more social media stalking, we learned the band made a cameo at the Cook Brothers’ Folk Fest after-show at Jane Pickens Theatre on Friday night.

Josh couldn’t resist: “He pumps his own gas?”

The question is a loaded one. The British-born Mumford and Sons is arguably the most commercially successful folk band of the twenty-first century. The banjo-wielding foursome went electric on its last album, Wilder Mind, a move that drew comparisons to Dylan’s infamous electric set (a.k.a. the “booing incident”) at the ’65 Newport Folk Festival. I’m not convinced the modern audience would boo. Pack up their low-back chairs and head for the shuttle, sure. But you’d be hard-pressed to find a safer space for experimentation.

The unannounced format helps. It’s a trademark of festival producer Jay Sweet, who’s told reporters and fans that, one day, he’d like to keep the whole festival lineup a secret. (Read our interview with Sweet here.) It wouldn’t be too much of a stretch from the status quo; tickets sell out before the artists are announced, anyway. Surprise sets, from James Taylor and My Morning Jacket in 2015 to Nathaniel Rateliff and The Night Sweats in 2017, are par for the course. Jay Sweet wouldn’t steer us wrong. We all know it.

Also: Unannounced sets protect the artists from Internet chatter and can get around non-compete clauses in contracts between bands and other summer festivals.

More importantly, though, there’s beauty in the unknown. An unannounced set induces a giddiness among festival-goers and is an easy point of conversation while you’re waiting for a beer or a Porta john. It adds to the sense that we’re all in it together. If you love the unannounced band, you’re jumping out of your chair and headed to the stage to dance and sing along with other diehards. If you’re not a fan, you sit back, enjoy the day and feel happy for the folks who get to see their favorite artists. Maybe you get a lobster roll and a Del’s. It’s all okay.

On Saturday, just before the unannounced closer, I poll my fellow festival-goers. Some have heard the same rumors as us. Another, in a Neil Young T-shirt, holds out hope for “Heart of Gold.”

I ask if anyone would be disappointed if it’s the wildly famous folkies from across the pond. One woman shakes her head no, eyes animated. She’d be psyched. Another guy says: “Why Mumford when it could be a folk hero?”

We funnel into the crowd by the stage, still wondering, like Christmas morning, just what we’ll get. And when Jay Sweet takes the stage to announce Mumford and Sons, many of us feel some conflicted satisfaction: We shook the box, we guessed what was inside. We were right, but it’s not a surprise.

The band takes the stage and Brandi Carlile (2018’s resident roving artist) and Maggie Rogers join them. Then it hits us all at once: This is Newport Folk Festival! We can guess ’til we’re blue in the face, but we’ll never know the whole or the heart of it until we’re standing there, in front of the stage, seeing it with our own eyes. 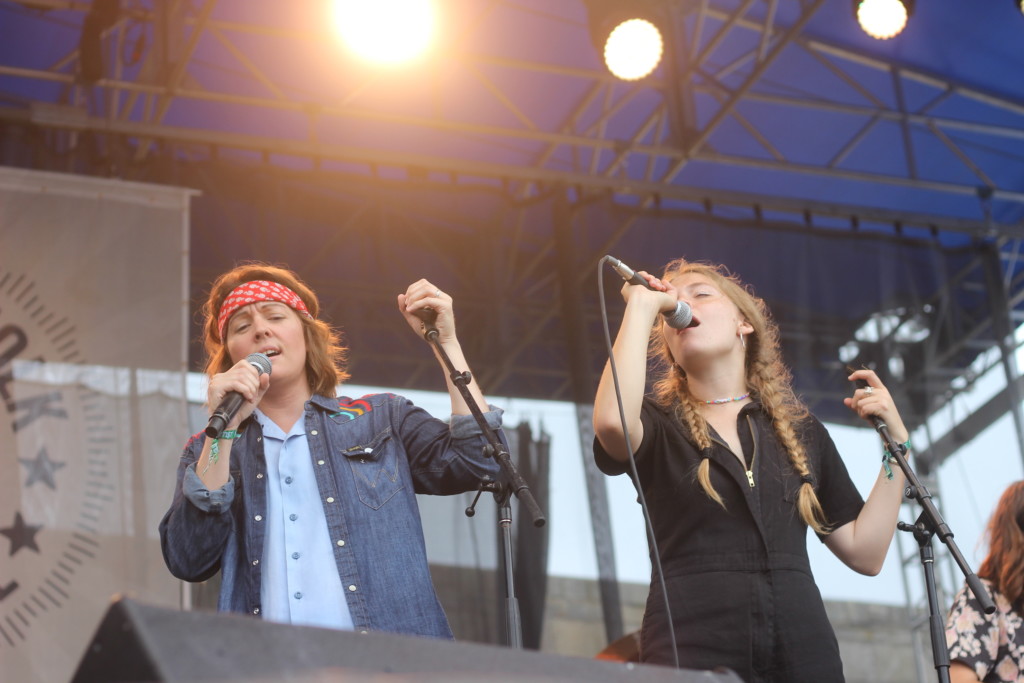 Mumford and Sons put on a hell of a set. The chill in the air, the diffused light, the overcast sky, the swelling music: The hour was almost cinematic.

But, joined onstage by Carlile, Rogers, Phoebe Bridgers, Mavis Staples, Jerry Douglas and other Folk Fest alums for covers of the Band’s “The Weight,” Simon and Garfunkel’s “The Boxer” and Radiohead’s “All I Need,” Mumford and Sons became part of the family.

Earlier in the day, Governor Gina Raimondo and ninety-two-year-old festival founder, George Wein, announced an agreement between the Rhode Island DEM and the Newport Festivals Foundation, which will keep the Newport Jazz and Folk Festivals in Newport for twenty-five more years.

Next year, five years from now, two decades from now: We can’t predict who will RSVP, who’ll collaborate, who’ll show up unannounced. But we’ll be in it together. That’s a family reunion we can count on.