10 Can’t-Miss Events at This Weekend’s PVDFest

Here are some of our top can’t-miss events for the weekend including food, performances, kids crafts, a parade and more. 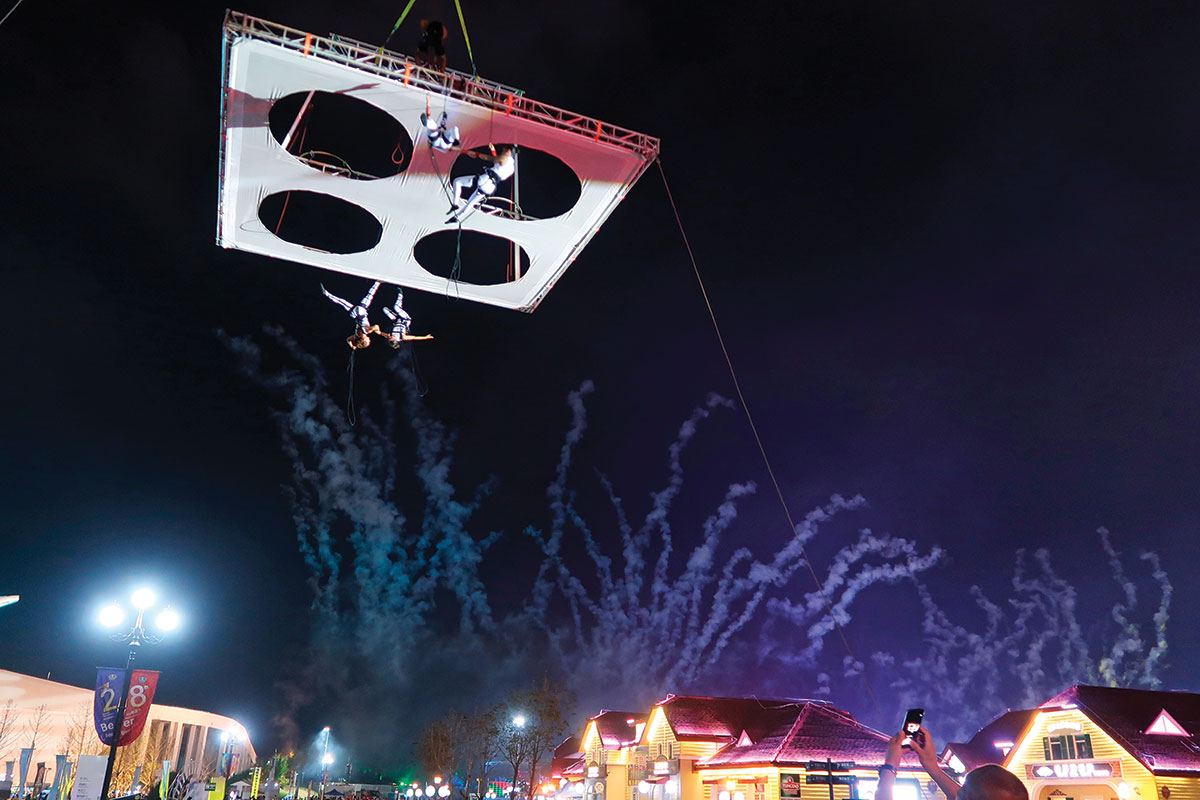 Appearing at this year’s PVDFest is Italian dance group eVenti Verticali, who perform from a suspended stage. Photo courtesy of FirstWorks and Eventi Verticali.

By Molly Clark and Lauren Poirier

PVDFest’s street festival brings art in all of its forms to life in Providence five years in a row. Mayor Jorge O. Elorza, the City of Providence’s Department of Art, Culture and Tourism and founding creative partner FirstWorks will host the city’s signature art festival June 6 to 9. Here are some of our top can’t-miss events for the weekend including food, music, crafts, a parade and more. Take a look at our picks, and download the printable schedule of all events, so you don’t miss what might interest you most.

Before consuming mass amounts of delicious food, PVDFest and the Rhode Island Bicycle Coalition are offering you an opportunity to prep for all those extra calories! More importantly, however, you will have the opportunity to meet Mayor Jorge Elorza, and to participate in an act of kindness on Thursday, June 6. Bike in a group to the Hot Club, where festival-goers will shine their flashlights towards Hasbro Children’s Hospital at 8 p.m., to say goodnight to the children as they go to sleep. Bicyclists are encouraged to arrive at Burnside Park no later than 6:30 p.m., and the group will leave at 7 p.m. If you do not have a bicycle, bike-share company Jump Bikes will provide you with one. Bikers are encouraged to wear bright and festive gear!

Ah – there’s nothing like the smell of classic Rhody food in the air. With more than fifty food trucks gathered in greater Kennedy Plaza, the PVDFest Food Village is not to be missed. Understand what makes Providence one of the greatest foodie cities as you nosh on cuisine from mobile vendors and booths. The Food Village will be open  on Saturday, June 8 from noon to 11 p.m. and Sunday, June 9 from noon to 6 p.m. Food is available for purchase from each vendor. Check out Matunuck Oyster Bar’s spot for fresh bivalves, Plouf Plouf Gastronomie for French fare, UMelt for creative grilled cheese sandwiches, Tricycle Ice Cream for yummy ice cream tacos or sandwiches or Dave’s Coffee for a pick-me-up, among many other options. Josh Berner, owner of HG80 food truck is offering festival goers a chance to not only try his untraditional tacos during the festival, but by doing so, you will also be helping save a life. Berner’s nine-year-old cousin, Mason, was recently diagnosed with Acute Lymphoblastic Leukemia, and is currently undergoing chemotherapy. To help alleviate the family’s medical expenses, Berner will be donating a large portion of sales from his food truck at PVDFest. HG80 offers vegetarian and vegan options, and everything served is gluten-free.

FirstWorks curates many of the shocking, thrilling performances at PVDFest. FirstWorks’ mission is to bring the community together through the arts and help make it accessible to everyone, and PVDFest is the time when the group can really show off. This year’s selection of performers hail from Italy, Uganda, Colombia, Gambia, Montreal and the United States. Stand-outs include the Italian group eVenti Verticali, which offers a suspended dance performance from a stage hanging from a construction crane (Friday, June 7 from 8:30 to 9 p.m. and Saturday, June 8 from 3:15 to 3:45 p.m. and 9 to 9:30 p.m. at the Spectacle Stage at Kennedy Plaza); Syncopated Ladies, an all-female tap group from Los Angeles that’s going viral for its video tap salute to Beyonce (Saturday, June 8 from 3:45 to 4:05 p.m. and 6:30 to 7 p.m., and Sunday, June 9 from noon to 12:30 at the City Stage at 25 Dorrance St.); and Grupo Niche, a Pan-American salsa band that is known the world over (Friday, June 7 from 9:30-11 p.m. at the City Stage at 25 Dorrance St.).

Drum up some brilliant fashion inspiration at this marvelous workshop hosted by famed celebrity costume designer Machine Dazzle, who, among other endeavors, has styled famous faces for the Met Gala. All materials are included for this free class, held at the Dark Lady bar on Snow St. on June 8 from noon to 3 p.m. Prepare stunning creations for the forthcoming parade that will guarantee to spark awe and admiration from fellow parade participants and audience members alike. 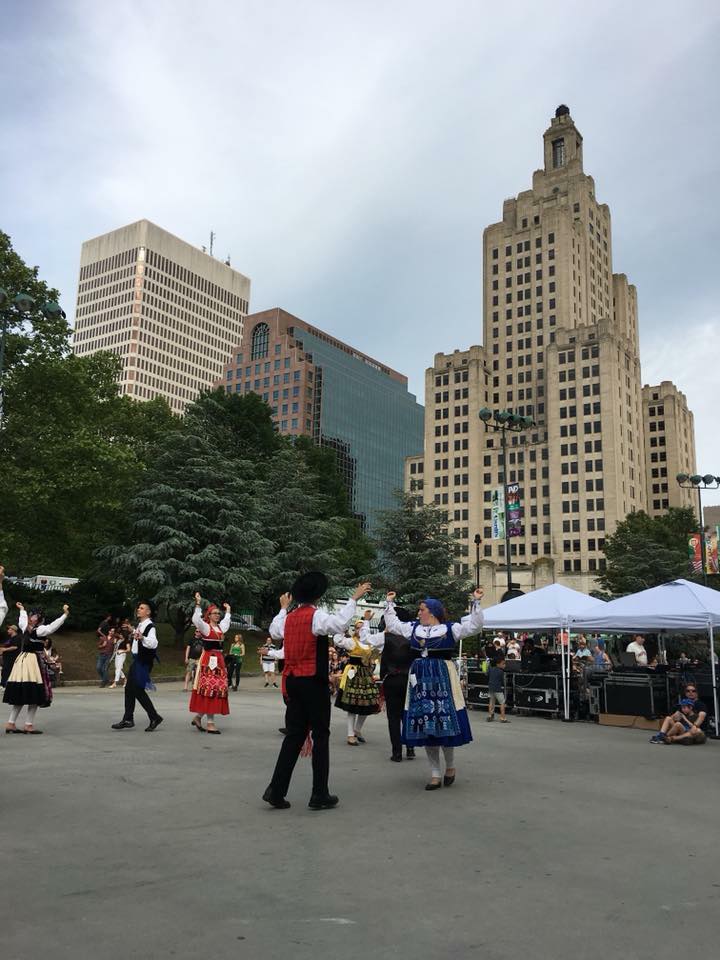 The Rhode Island Day of Portugal, a festival honoring those with Portuguese heritage throughout the area, has partnered with PVDFest to make the annual celebration even more extraordinary. Enjoy the festival on Saturday and Sunday, June 8 and 9 starting at noon on both days at the Alex and Ani City Center. On Sunday at 3 p.m., there’s a parade that will kick off from the Rhode Island State House to honor Portuguese heritage and the homeland. The event will culminate with a ceremony esteeming the spire of fire Chama da Portugalidade. Read more about Rhode Island Day of Portugal.

Head to PVDFest’s Food Village on Saturday, June 8 from 2:30 to 4 p.m. to witness (or maybe even achieve!) the making of the first world record in pretzel eating. Hosted by the Malted Barley and authorized by the Major League Eating Federation, the event will allow contestants eight minutes to eat as many pretzels as they can in pursuit of the prize and bragging rights associated with being the winner. Do those pretzels look delicious but you think you could only eat one? Head to the Malted Barley’s food stand to devour one of your own.

Put on your thinking cap and get those creative juices flowing. The Mini Maker Faire, taking place at 255 Westminster St., caters to families and children with thirty booths designed to inspire young ones to experiment, explore, design and invent. The event takes place on Saturday June 8 from noon to 4:30 p.m. and welcomes participants of all ages. A collaboration with AS220, the Maker’s Faire showcases works from makers of all types including everyone from scientists to artists and all creators in between. The event is free. More information on location and parking can be found here.

On the last morning of PVDFest, Sunday, June 9, be sure to get some sustenance at the Black Sheep before heading off to the parade. Join Millennial RI at brunch between 11 a.m. and 4 p.m., and be sure to register as a Millenial RI member before attending; members will receive a free mimosa. You don’t need a ticket to get in, but sign up for brunch here to let the organizers know how much orange juice they need to buy.

Divas, performers, fashionistas, cool car-owners, here is your opportunity to shine. PVDFest welcomes you to march in its boisterous parade all the way from Greene St. to Kennedy Plaza. The parade will consist of several pop-up parades, the first beginning at 2 p.m. at the corner of Union and Washington streets, the second a kid’s parade convening at the URI Dr. Pat Feinstein Child Development Center at 4 p.m. and the final starting at 4 p.m. at Washington and Westminster streets. Read about the rules and regulations and sign up to join the parade here.

See PVDFest’s full lineup of concerts and events at pvdfest.com.

See Sky-High Dance and More at This Year’s PVDFest