Where Does Rhode Island Stand on Marijuana?

With legislation stalled at the state level, local officials are banking on medical marijuana.

In the early evening of June 22, the Rhode Island House of Representatives passed the state’s $9.9 billion budget for fiscal 2020. Among the high-profile provisions in the 488-page spending plan was Article 15, which significantly reshaped the state’s medical marijuana industry. After six years of three dispensaries, the General Assembly expanded the marketplace to nine, and doubled the price of a license to $500,000.

In his budgetary post-mortem, House Speaker Nicholas Mattiello expressed his satisfaction with the final product: “There is something in there for almost every segment of society. I would guess that everyone in this chamber [got] something they liked, but not everything they liked.”

For his part, Mattiello got something he liked very much: nine words added to Article 15’s rulemaking section, which mandated that any new cannabis or hemp rules promulgated by the Department of Business Regulations “shall be subject to approval by the General Assembly prior to enactment.”

In the hullaballoo over the licensing fee hike and the jockeying for the six new licenses, this power shift from the governor to the speaker of the House went largely unnoticed. Providence Senator Josh Miller, one of two point people in the General Assembly on cannabis legislation, says he found out about it either just before or just after the budget passed, but generally “it was not well-known. I was surprised, and I’m not easily surprised at this point.” 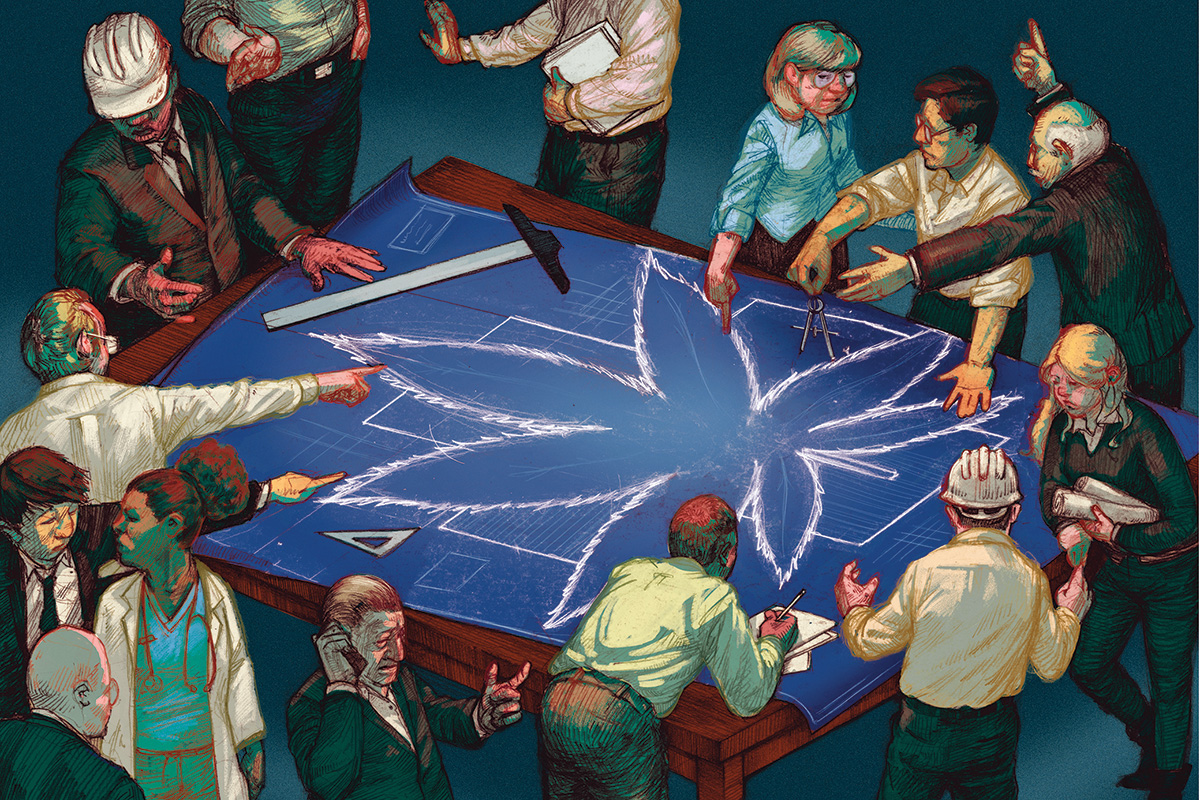 “It’s basic checks and balances,” Raimondo said at the time, “to make sure that we move away from the old way of doing business. Let’s have this be a place of transparency, equal footing and no more special deals for special people.”

Mattiello immediately back-pedaled. He promised a legislative fix and took umbrage at the “unnecessary expense by the governor of state taxpayers’ dollars and judicial resources,” according to a written statement by Mattiello’s spokesman Larry Berman. The legislative veto, Berman wrote, was originally enacted “to ensure that the regulatory process would be fair, open and transparent to everyone.”

Indeed, nothing says transparency like quietly slipping in major changes to important legislation at the eleventh hour. And nothing says equal footing like demanding half-a-million-dollar licenses — currently the highest in the nation — to join a tiny state-controlled monopoly.

“Colorado is a pretty good model that a lot of states could benefit from,” she says. “We have reasonable licensing fees and thousands of licensed businesses. It means we have a lot of competition in the marketplace, and that is very American and it serves the consumer well. We also have a local option in which each jurisdiction can determine, based on local needs and desires, where, how many licenses, and what type of license is appropriate for that community.”

In the last six years, the number of card-holding medical marijuana patients in Rhode Island has more than tripled from 4,849 in 2013 to 17,891 in 2019. That does not take into account out-of-state cardholders, who, in June 2018, were permitted under a new interstate reciprocity law to buy cannabis at Rhode Island dispensaries. And, for the last three years, the dispensaries shattered sales records. In fiscal 2019, they sold $56 million worth of marijuana, a 46.6 percent increase over fiscal 2018, when they did $38.2 million in business — up more than a third from fiscal 2017’s $28.2 million.

With numbers like these, rather than moving away from the old way of doing business, many critics see the state galloping toward a regulatory structure that concentrates its nascent cannabis industry into a few well-connected hands, destroys small businesses, stifles economic development and consumer choice and encourages corruption.

In August, the FBI issued a warning in its weekly broadcast about the “emerging threat of public corruption in the expanding cannabis industry,” mentioning “some states” charging as much as $500,000 for a license. As if to prove the point, one month later, the agency charged Fall River Mayor Jasiel Correia with accepting $600,000 in bribes from cannabis operators hoping to locate their businesses in his city. Correia pleaded not guilty.

In Rhode Island, a who’s who of retired CEOs, lobbyists and real estate developers are lined up to grab what John Marion, executive director of Common Cause Rhode Island, calls “a Willy Wonka golden ticket” to become the next marijuana millionaire. Representative Charlene Lima of Cranston is already suspicious.

“People seem to be spending a lot of money buying buildings….” she says. “Why would you expend so much capital when you don’t even know if you are going to be one of the six? Any competent businessman will tell you: To spend that kind of money, you have to have some reassurances that you are going to be successful. It doesn’t pass the smell test.”

As the General Assembly returns to Smith Hill this month, Rhode Island’s marijuana policy appears to be less settled than June’s sleight-of-hand suggests. In November, the Department of Business Regulations issued its proposed regulations: The six new licenses would be awarded via lottery and, a win for the forty-five local cannabis cultivators, all six would be barred from growing their own crops for at least a year while regulators determine industry demand. Both Mattiello and Ruggerio promised thorough reviews of the proposed regulations — Mattiello told the Providence Journal the new rules “may not be consistent with the intent of the law passed by the General Assembly and signed by the governor” — and Newport Representative Lauren Carson says legislators have a lot more work to do.

“We should take a hard look — we are creating an industry and that is not something governments normally do and, as such, we need to be sure that we are tapping into the right ideas and right resources so we can be of assistance to the business community.”

And as the state tries to herd all cannabis consumers to the medical dispensaries, the effort to legalize marijuana for adult use remains another unresolved issue.

A year ago, Raimondo reluctantly included a cannabis legalization scheme so the state would not fall behind its neighbors, like Massachusetts, that have already done so. In October, she joined the governors of New York, Massachusetts, New Jersey, Pennsylvania and Connecticut to adopt a regional approach to cannabis and vaping legislation and policies and settle on some “core principles” regarding market regulation, public health and safety and enforcement and best practices. And in November, Raimondo said she was “exploring the possibility of once again including the legalization of adult-use marijuana.”

Complete legalization has languished since 2010, when the first recreational marijuana regulation bill was heard in committee.

But the Marijuana Policy Project, the advocacy organization behind the local lobbying effort, Regulate RI, has pulled back, because “Every year, we run up against the brick wall of the speaker and the senate president,” says former Regulate RI director Jared Moffat. “In Rhode Island, there’s not a willingness to putting any staff or resources into looking at this issue. Until there’s a change in leadership or a change in attitude, our chances are not very good.”

The biggest losers are the vanguards of legalization — the medical marijuana patients, who fought for the right to come out of the black market’s shadows and buy their medicine without criminal consequences.

“There’s something wrong with the attitude in this state,” says Ellen Smith, a patient and long-time activist. “They’ve forgotten why this whole thing started.”

They complain of constantly shifting regulations and taxes on home growers, who do so to keep down costs, maintain their privacy or ensure a steady supply of a strain that is most effective in treating their particular condition. Each year, they gather themselves to fight off bills that would eliminate home growing altogether.

“A lot of people out there who are hurting can’t afford to be going to the dispensaries. The prices are out of control,” says Phil Diamond, who treats his glaucoma with cannabis and grows for himself and four other medical marijuana patients. “Compassion centers. There’s nothing compassionate about them. It’s all about the money.”