Meet the faces in line and behind the counter at the iconic Olneyville New York System wiener joint.

11:52 a.m. Wiener Virgins, Kate and Netta Beggs
“We are from Madison, Wisconsin. We found out about it on Yelp. They explained it to us. They basically said this is what we are known for and have a seat. It’s very good. It’s our first time going all the way [laughs]. We’re glad we came.” 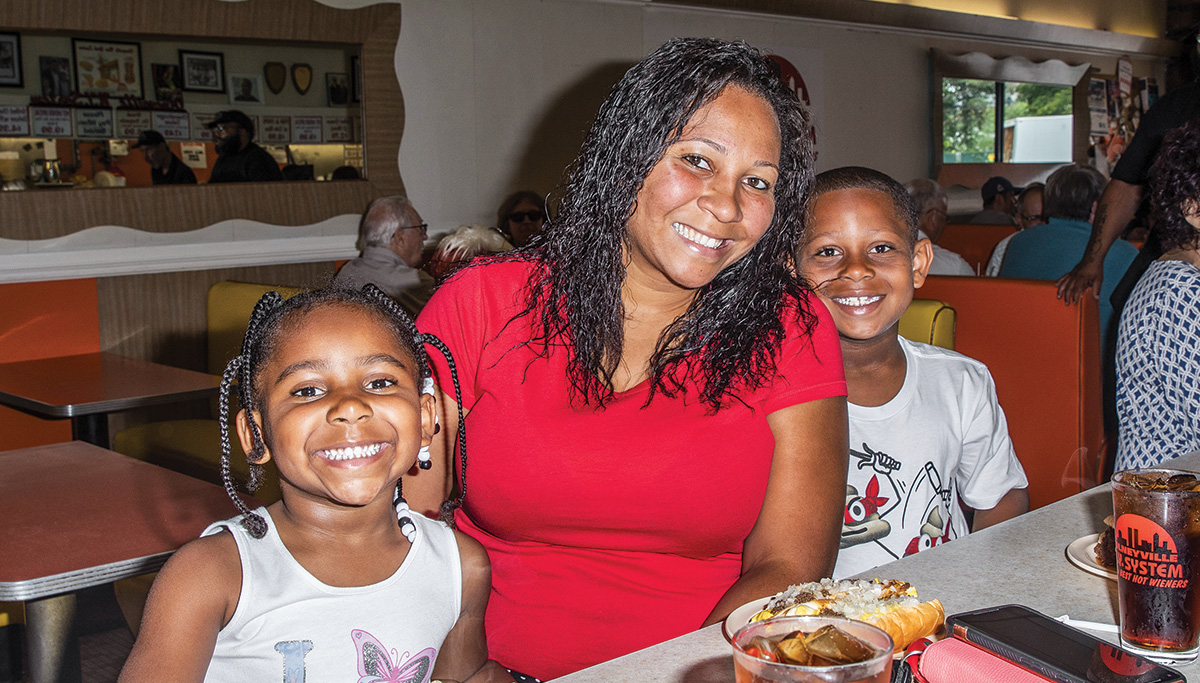 12:02 p.m. Katrina, Lailani and Ky’vaughn Patrick
“We are visiting Rhode Island from North Carolina. I grew up here. I come to visit my dad and grandmother. I think we’ve always come here, but I started coming on my own when I was sixteen and started driving. Between this one and the other one, I’ve been more than a dozen times. This is my kids’ first time here. They are getting the chili. I am going for two all-the-way. I come back at least once a year. It’s not like something you can just make at home.” 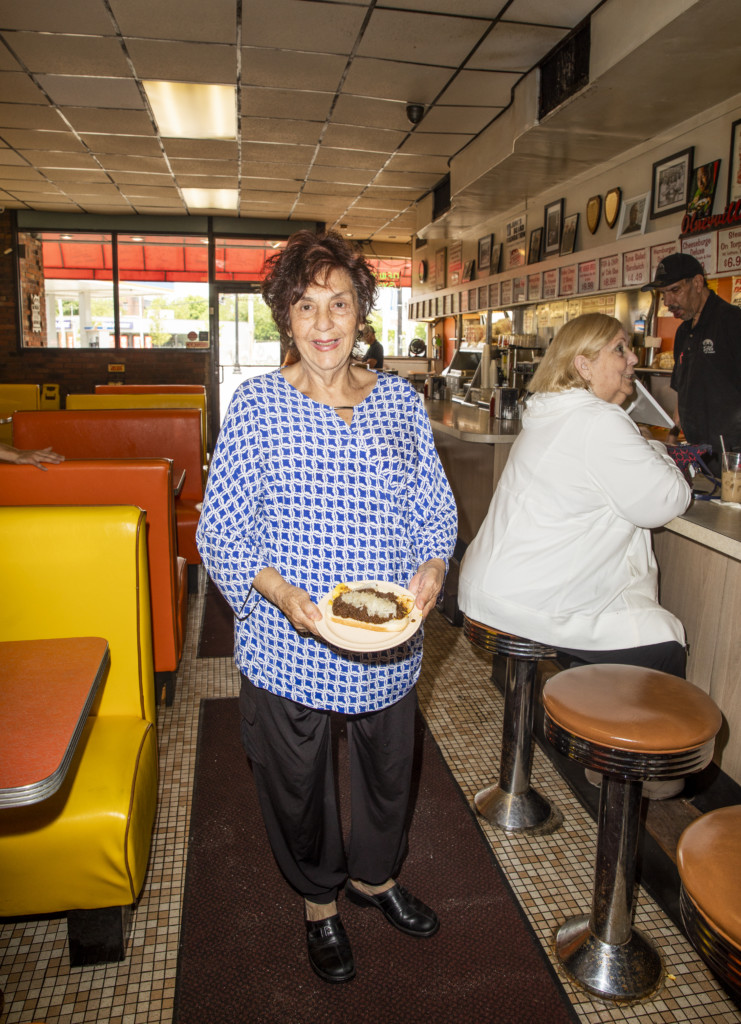 Ellen Soccio with an air dog.

12:10 p.m. Anthony, Barbara, John and Tommy Rendine
“I grew up on Vinton and Broadway in Providence. Now I live in San Diego with my family. I probably first came down to Olney- ville eighty years ago. I am eighty-six and I’ll be eighty-seven real quick. I came here when I was twenty years old when I went into the Navy, but I still have family in the area. We had to stop by Olneyville for New York System hot wieners. I used to stop and I would get for 25 cents, two hot wieners and a drink. Can you imagine that? That was a long time ago. Of course, everything has changed, but I remember Olneyville as a mill town. Before I left to the Navy, I worked at a jewelry manufacturer in an old mill. This was always a treat for me. I came whenever my dad wanted to. He used to say, ‘Might as well have a hot weenie.’” 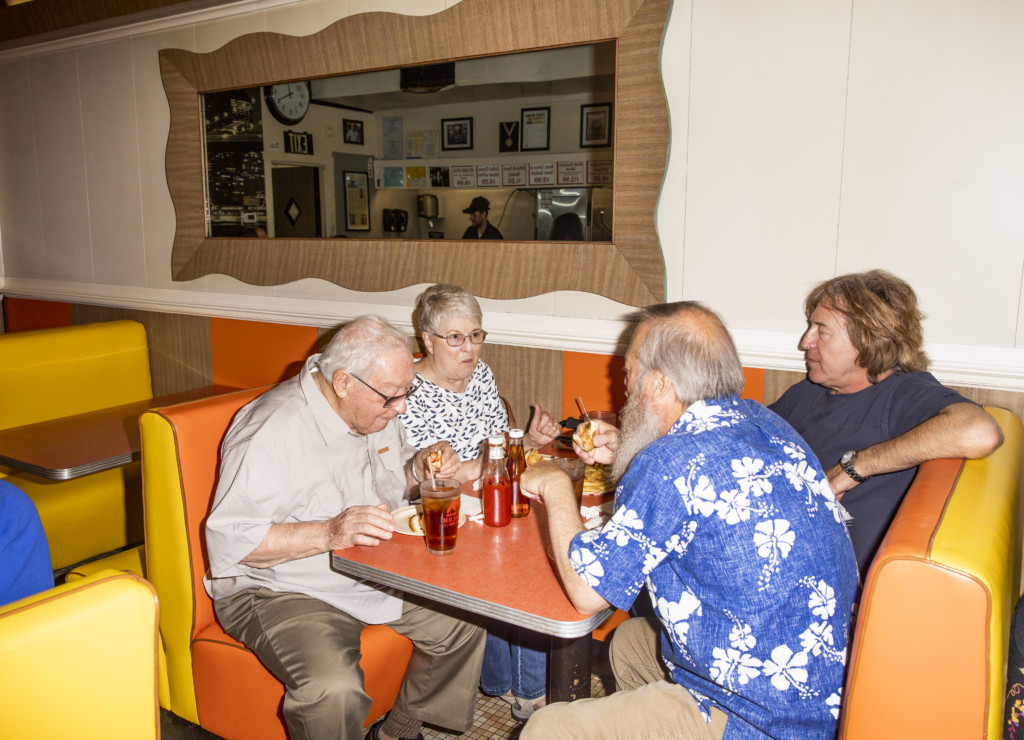 12:20 p.m. Howard Merten and lawyers at Partridge, Snow and Hahn
There are three tables, all from the same law firm. It was someone’s idea to do a lunch train. Every so often they’ll pick a place to go and hang out. “I’ve been coming here since 1979. I used to come here late at night in my college days. I haven’t been here in a long time. It’s very eclectic. We’d come here in big groups after we left the Met Café, when it was in the original building.” —Howard 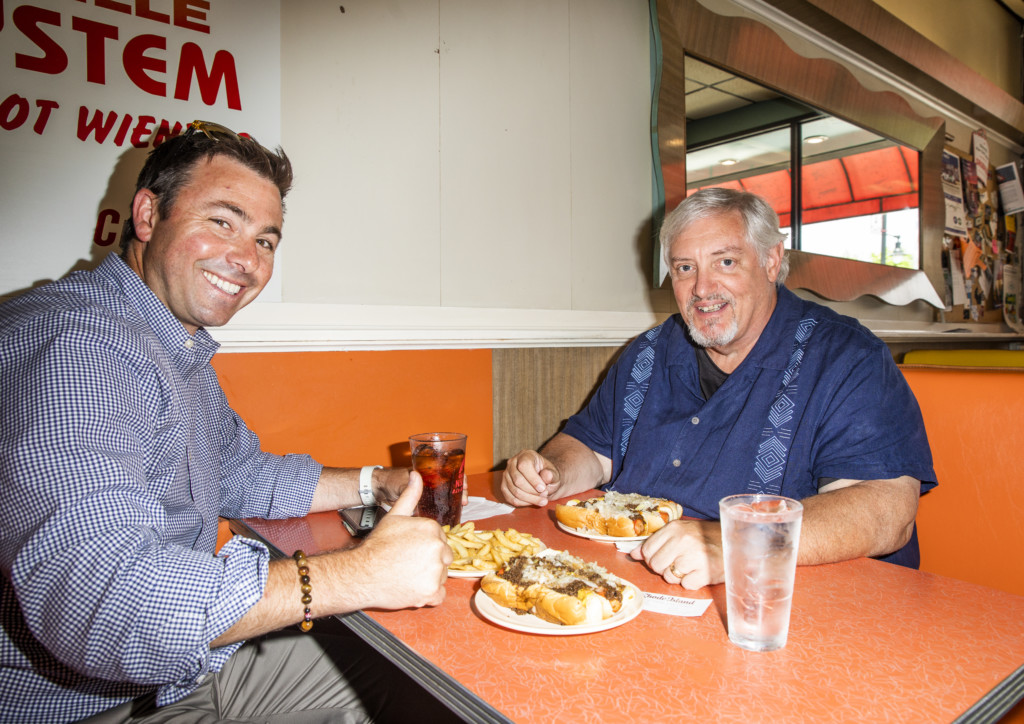 Howard Merten (right) with a lawyer from Partridge, Snow and Hahn. 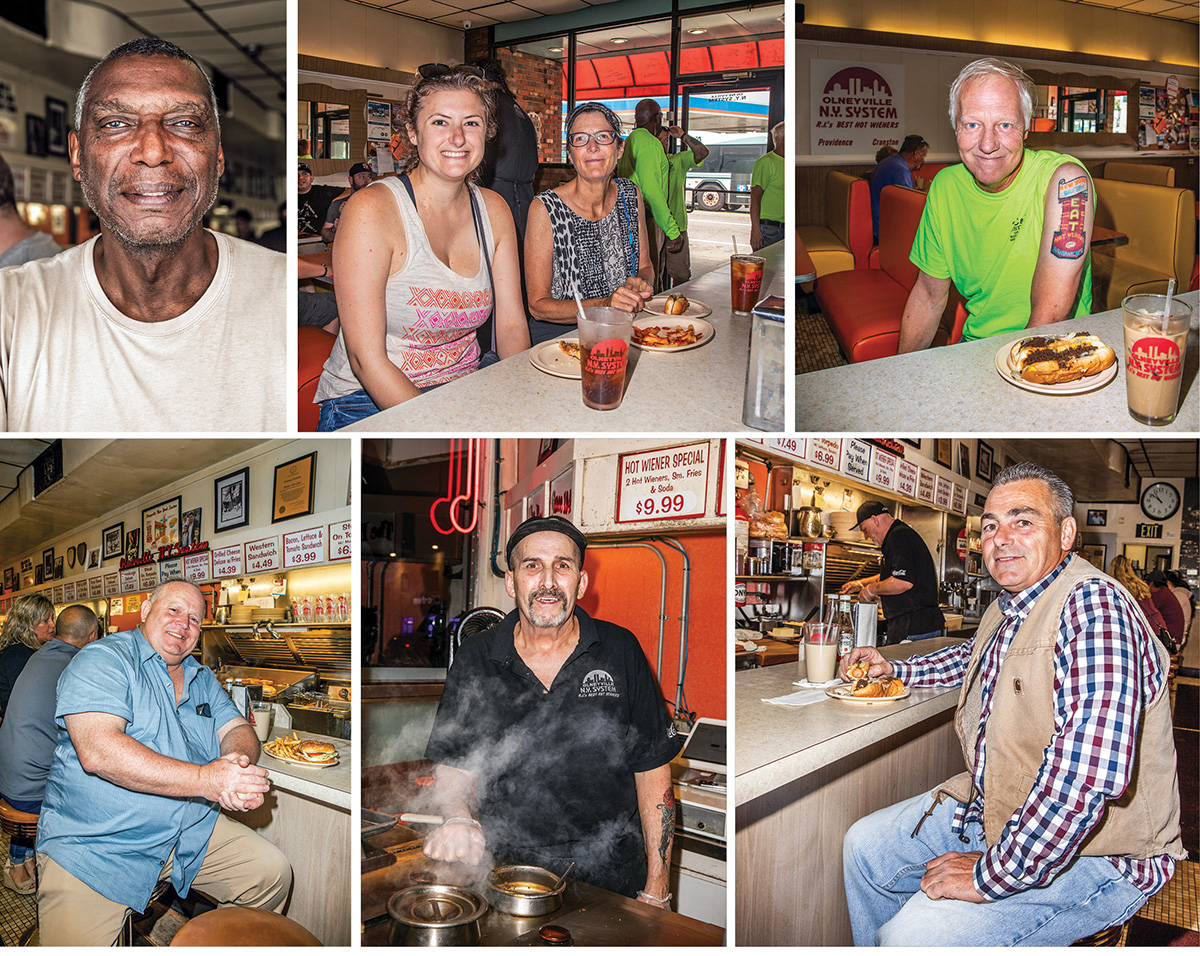 1 p.m. Sal O’Brien, employee
“I’ve worked here forty years, started in 1979. I was sixteen years old. I was only going to stay a week, here I am forty years later. I love meeting customers, and giving them a hard time: ‘You have reservations?’ I have M.S. [multiple sclerosis]. It hit me in my forties, and now it’s getting worse, but I gotta work. I got bills and I love working.” 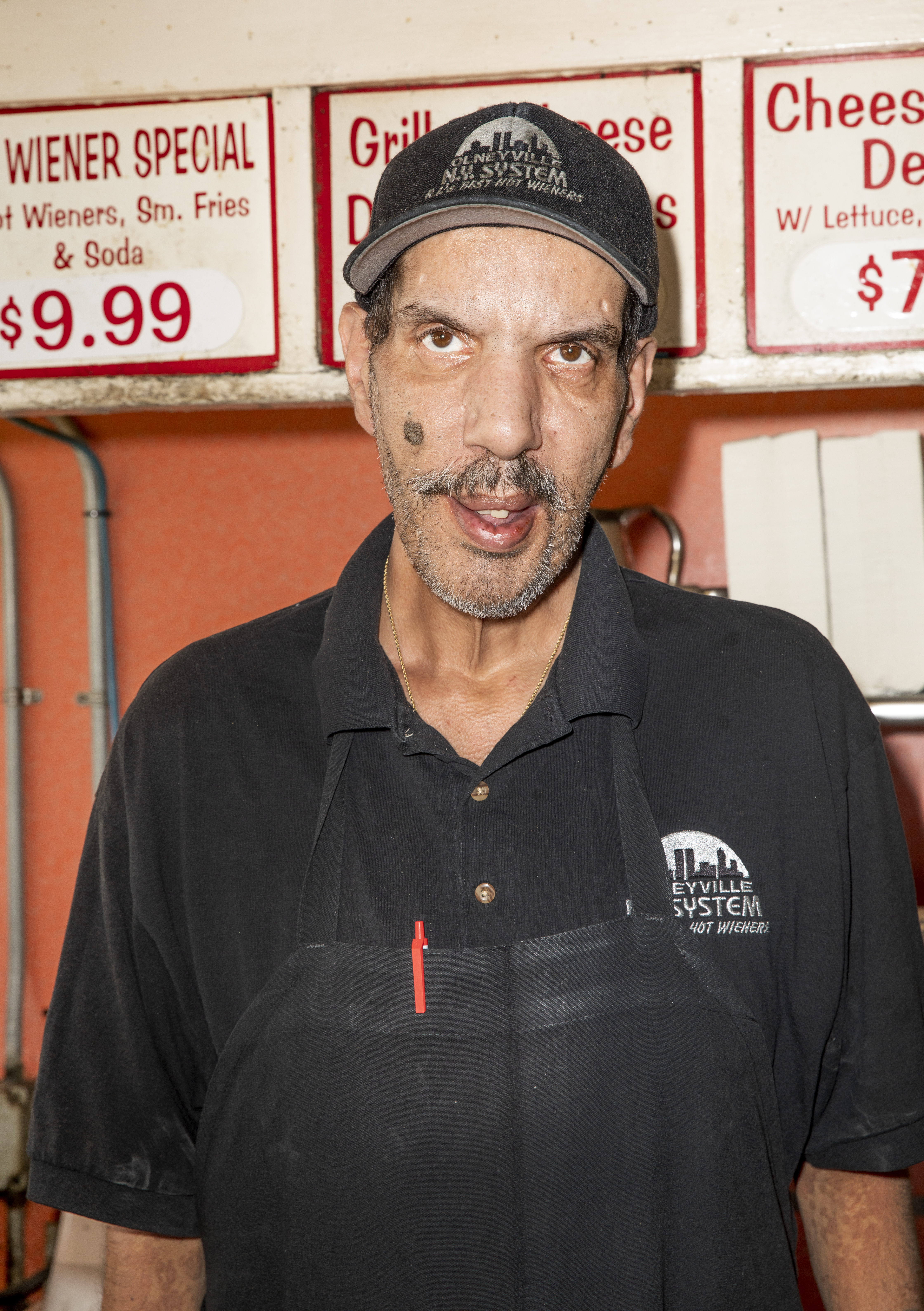 Late Night, 10:30 PM
Anthony Parillo: I started working here in 1979, started as a dishwasher.
Wilson Pizzaro: No, he came with the original building in 1946.

10:53 p.m. Thomas Miller, firefighter
“I work twenty-four-hour shifts from 7 a.m. to 7 p.m. I did yardwork all day, got the pool cleaned out. I took my motorcycle out for the day for a ride and then grabbed some food. I crave gaggers once a month. It’s a little treat for me. I usually do two, but they threw me a third one. I’ve known the guys for years.”

11:16 p.m. Providence Police Department Senior Detective Dan O’Connell
“One night, I was out with my daughter and her friends. Then we came here. My daughter says to me, ‘Dad, have you ever come here?’ I said, ‘No, I never come here.’ As soon as I walk in the door, Greg is at the end of the counter and says, ‘Hey, Danny!’ I go, ‘Hey, Greg.’ My daughter looks at me and says, ‘You’ve never been here before?’ I said, ‘Hunny, I’ve been coming here for thirty years.’

One of our guys got killed in 1994. Steven Shaw. It was a blizzard. A blizzard. Twelve or fourteen inches of snow. We have the funeral, and come back to the police hall. We order 500 wieners. Greg cooked them all and came down and delivered them all. It was one of those things that stand out. You have all these cops who were there celebrating a life, and all of a sudden all these wieners show up. Five hundred wieners. This is a cop-friendly place. We come in here no matter who’s in here. I’ve been in here when there were gang members in here. And no one says nothing to anybody. You acknowledge them and everybody is cool. You get everybody in here. It’s absolutely the place to be. You have to see it to believe it. Asian, Spanish, white, they all have one thing in common: All the way or no onion.”

11:26 p.m. Peter Garzone and Chris Latucci
“We are going to his house. He ordered twelve and two large fries. We have to get some coffee milk, also. That’s very important. We came in once and there were two women here. They said, ‘We want eighteen.’ The guy asked, ‘To go?’ They said, ‘No we’re going to have them here.’ ‘You want something to drink?’ And they said, ‘No. We’re hungry, not thirsty.’” 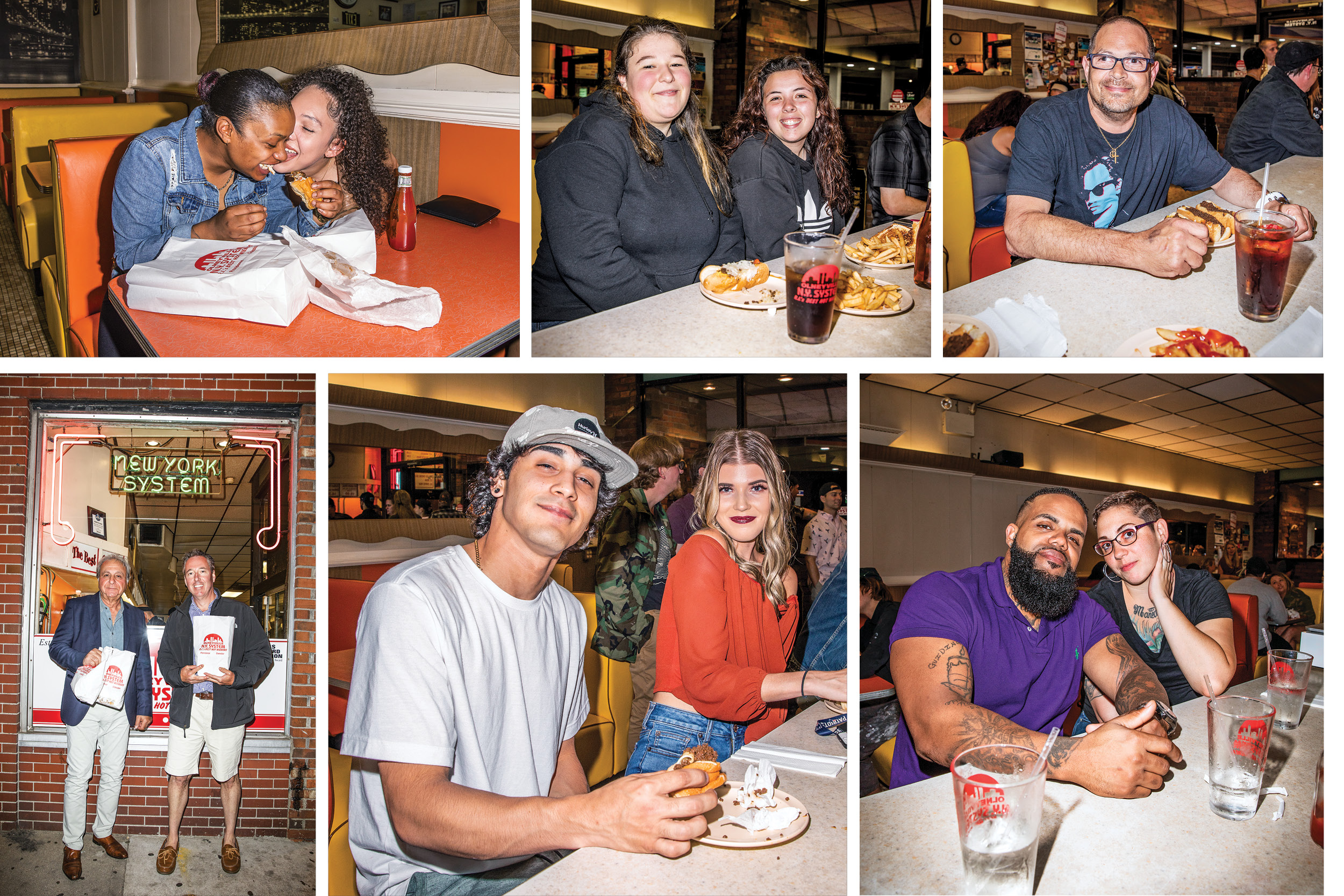 11:30 p.m., Richard Maggiacomo
“I’ve been coming here all my life. My grandfather used to bring us here when we were kids. My grandfather would come here, then come to the house at night around 8:30 or 9 o’clock. We were real small, so we’d be in bed. And he’d open the bedroom door and shake the bag, so we could smell it. He’d come over and absolutely get us up, and we’d sit around and have hot wieners. Then we’d go back to bed. He’s been gone almost twenty years now. Every time I come here, it makes me think of that. My first bike came from Benny’s next door, honest to god.”

11:48 p.m. Darien Catallozzi and Courtney Cariker
“This week we already came twice. It depends how late it is and how hungry we are. We get the same thing all the time. They know our order. Two plain wieners, a grilled cheese deluxe and a coffee milk; two wieners all the way and a Coke. I ask for ketchup every single time and they yell at me. They say read the sign. Then they end up handing me a squeeze ketchup bottle because they know I struggle with the glass bottles.” —Darien

1:38 a.m. Alyssa Pina and Mariah Gutierrez
“Hey, she got her food before us. Kick her out. Bitch, you can’t sit with us! Why didn’t you get me food?” —Alyssa

1:42 a.m. Misael Ortiz and Allie DeLuca
“I first tried hot wieners two years ago and it’s been my favorite since. I actually met him here a month ago. I made the first move. I gave him my number on a receipt in lipstick. This is our first time back since then.” —Allie 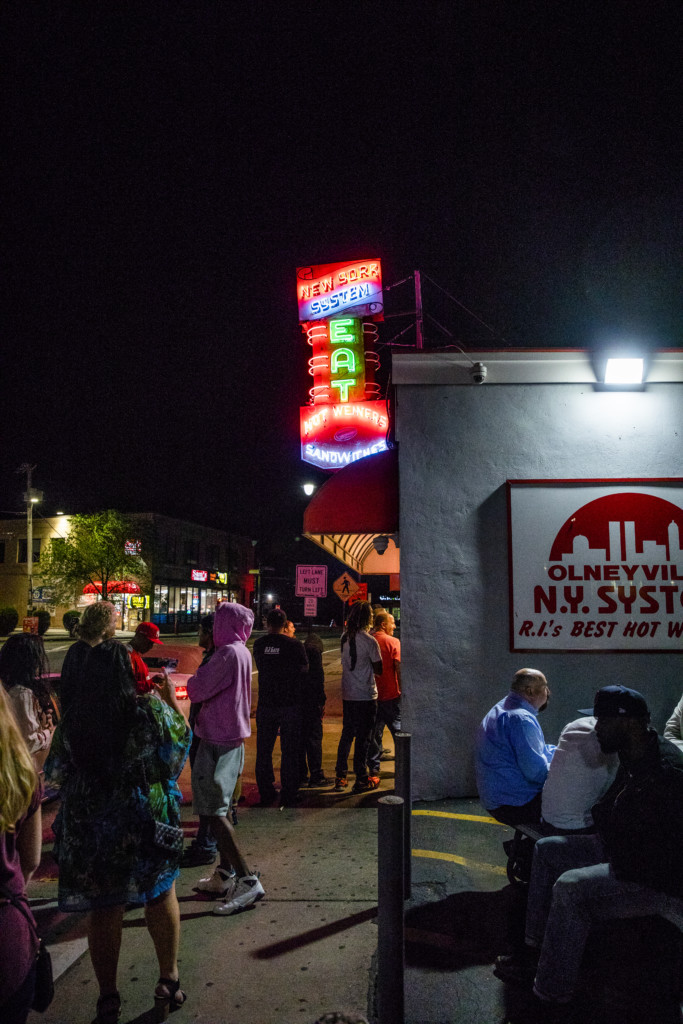 2 a.m. Melissa Cook and man who goes by “Mr. T.”
“I got a steak and cheese. If you get onions, you automatically friend-zone yourself.”

2:30 a.m. Jason Furtado
“I am the general manager at Smith and Wollensky steakhouse, and I drive from Providence to Boston to work. I’ve worked at Camille’s, Capriccio, Café Nuovo in Providence. I was on at twelve and left at eleven at night. I worked eleven hours. You know, short shift; a half day, as they say in the restaurant industry.” 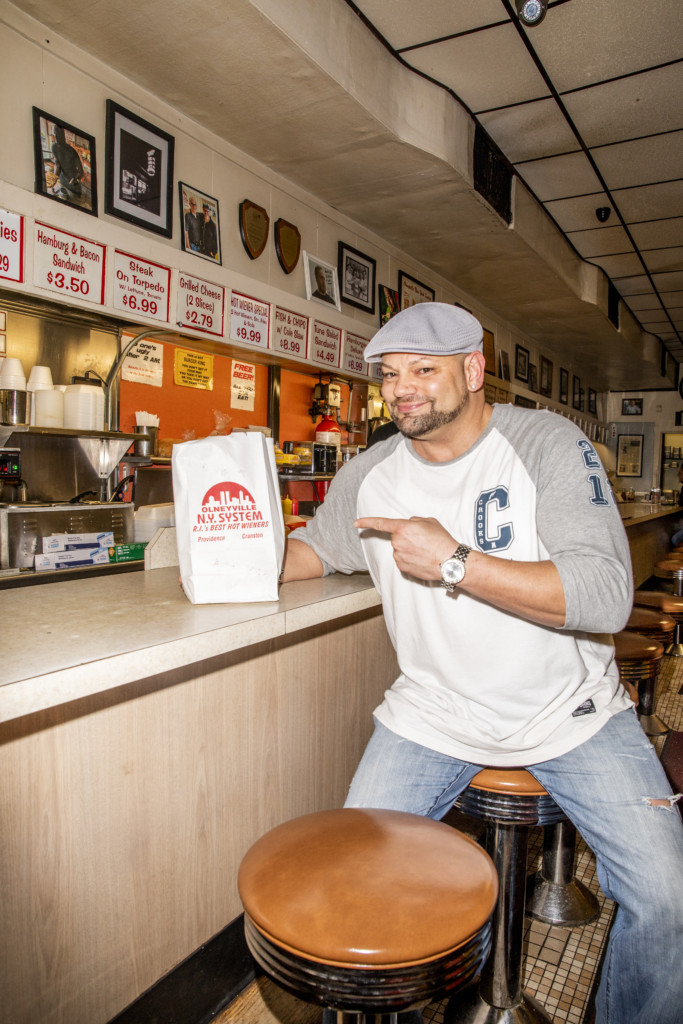 “We just came from EGO. NY System is a great place to meet up after a night of dancing and enjoying life with friends. It’s been part of my family since I could remember. My mother would buy it for us on Fridays as a special treat!” – Matt 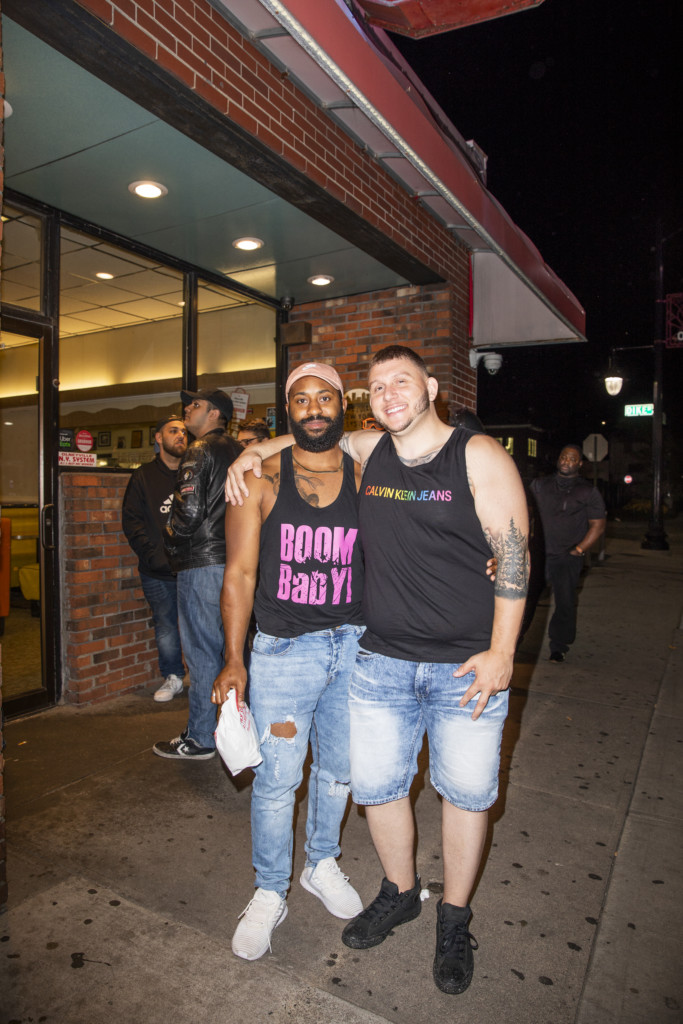