The Top Dentists in Rhode Island for 2019

147 dentists who will make you smile, plus find out what dentists do for fun when they're not asking you to "open wide."

After hours: We know it’s hard to chat up your dentist while you’re opening wide and saying “ahhh.” So we asked four Rhode Island dentists what they do when they’re not fixing smiles. Turns out, they have some pretty cool sidelines. By Diane Sterrett.

By day, Gary D. Light, D.M.D., focuses his Providence practice on general and cosmetic dentistry, particularly implants and oral reconstruction. In his spare time, though, he collects wine. It’s a passion that dates back to 1989 when he fell in love with Barolos.

“I started buying a case here, a case there. Next thing you know the shelves are full. As it turns out those 1989-90 Barolos turned out to be their best years of the century, so I took those and tucked them away,” Light says.

He enjoys collecting verticals (a multi-year run of the same wine) then tasting them side by side to see how they differ. “Even though it’s the same vintner, the character changes because of temperature, soil, or the climate that year.”

Light loves the social aspect of wine tasting and collecting and has been very involved with donating bottles to charities for auctions and events. He and his late wife loved to host dinners and share their latest finds.

“What you find with collectors is they discover a good bottle and they just can’t wait to share it. I keep notes not just about the wine, but the event or situation. A wine can taste completely different if you’re at a special dinner, then you try it again later you find it’s not as good.”

He’s self-taught, gaining knowledge through reading and sharing notes. At first, he focused on California wines such as Barolo, Hess and Sterling, because they are marketed by varietal and didn’t feel as intimidating. Eventually he expanded into European wines, which are marketed by region. His collection grew from a couple of cases on a bookshelf to more than 1,000 in a climate-controlled cellar he built himself.

The most fun is finding a bargain, he says. “Anyone can pay $100 for a good bottle. The real pleasure is in buying a $20 bottle that in a few years tastes like a $100. A patient introduced me to a bottle of Spanish wine that was outstanding. It was $40, but it tasted as good as a Screaming Eagle, which is a wine that retails for $250.”

Lena D. Karkalas, D.D.S, juggles her cosmetic dentistry practice with board certification and a position on the American Board of Forensic Odontology. She also teaches forensic dentistry at Tufts Dental School and is currently a team member of the Rhode Island Cold Case Task Force. 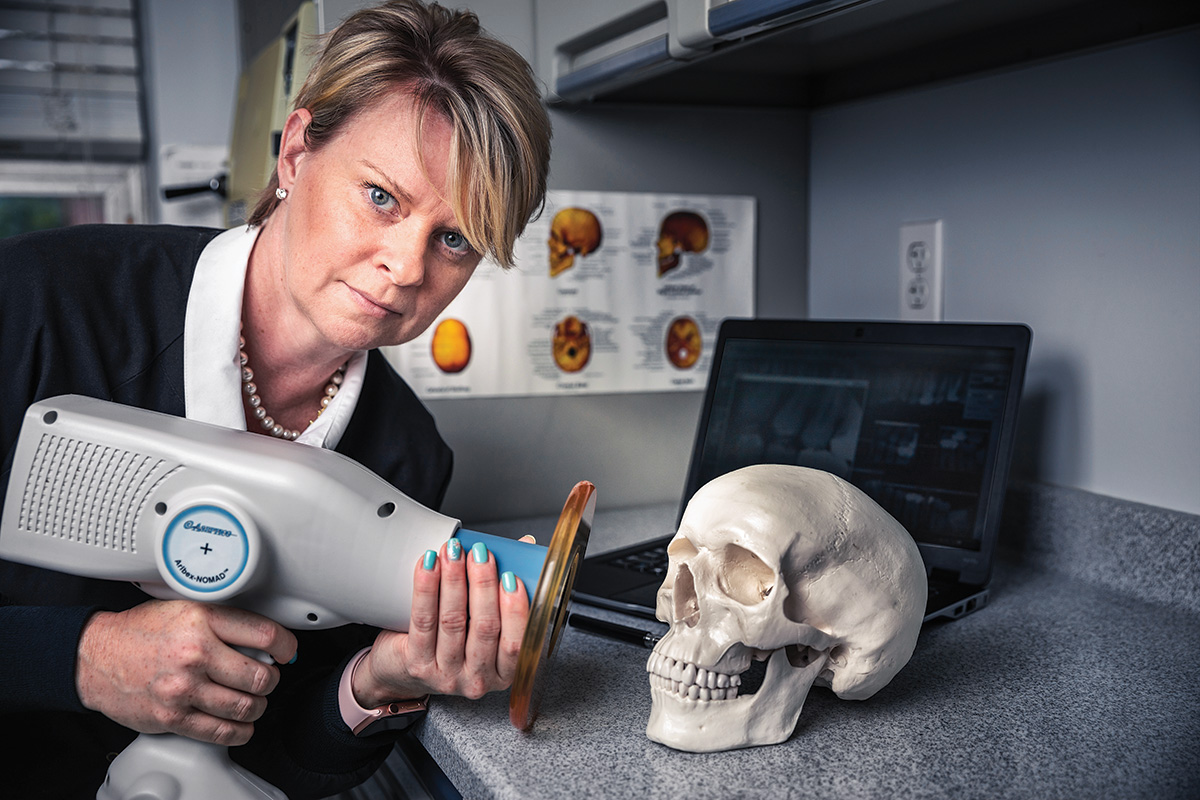 “Forensic dentistry, or forensic odontology, is the liaison between dentistry and the law. We work with law enforcement, medical examiners, hospitals and lawyers, helping with identifications, bitemarks, age assessment, abuse and civil litigation. I’m called in, for example, if a deceased person needs to be identified because there are no other means of doing so. Sometimes human skulls are found and we need to evaluate the age of the person. Occasionally I consult on a personal injury or malpractice case.”

Forensic odontology enables her to make identifications with 100 percent certainty, unlike fingerprints. She has helped identify a badly decomposed body found in a trash bin, consulted on a civil lawsuit as to whether an injury occurred the way the victim alleged, and helped a hospital doctor identify whether a bitemark was human or animal. She’s also certified through the FBI to help on their cases.

Karkalas first fell in love with the idea that she could use dentistry to help in other ways during dental school in the early 1990s. After practicing dentistry for a decade, she went back to school for seven years to become board certified. It’s a rare field; there are only eighty-seven diplomates of the American Board of Forensic Odontology in the world. Only two states (New Mexico and Arizona) have full-time paid forensic dentists.

“It is definitely not like any crime show you see,” she says. “It takes more time and effort than it appears. Not all cases are straight forward and you need to work up any case thoroughly; it’s your reputation on the line. The best thing about this work is the ability to put closure on people’s lives. The person I’m identifying is somebody’s family member. It allows whoever is putting them to rest some closure in the tragedy they’ve had to go through. The worst is the unknown.”

Larry LoPresti: Are you brave enough to give a bear a root canal?

For twenty-eight of his thirty-nine practicing years, Larry LoPresti, D.M.D., has worked on some of the most interesting dental cases around. He is the consulting dentist for Roger Williams Park Zoo, helping care for animals as varied as polar bears, cheetahs, African wild dogs, red pandas, monkeys and sloths. Veterinary dentists are a rare breed; there are only about 100 in the country. 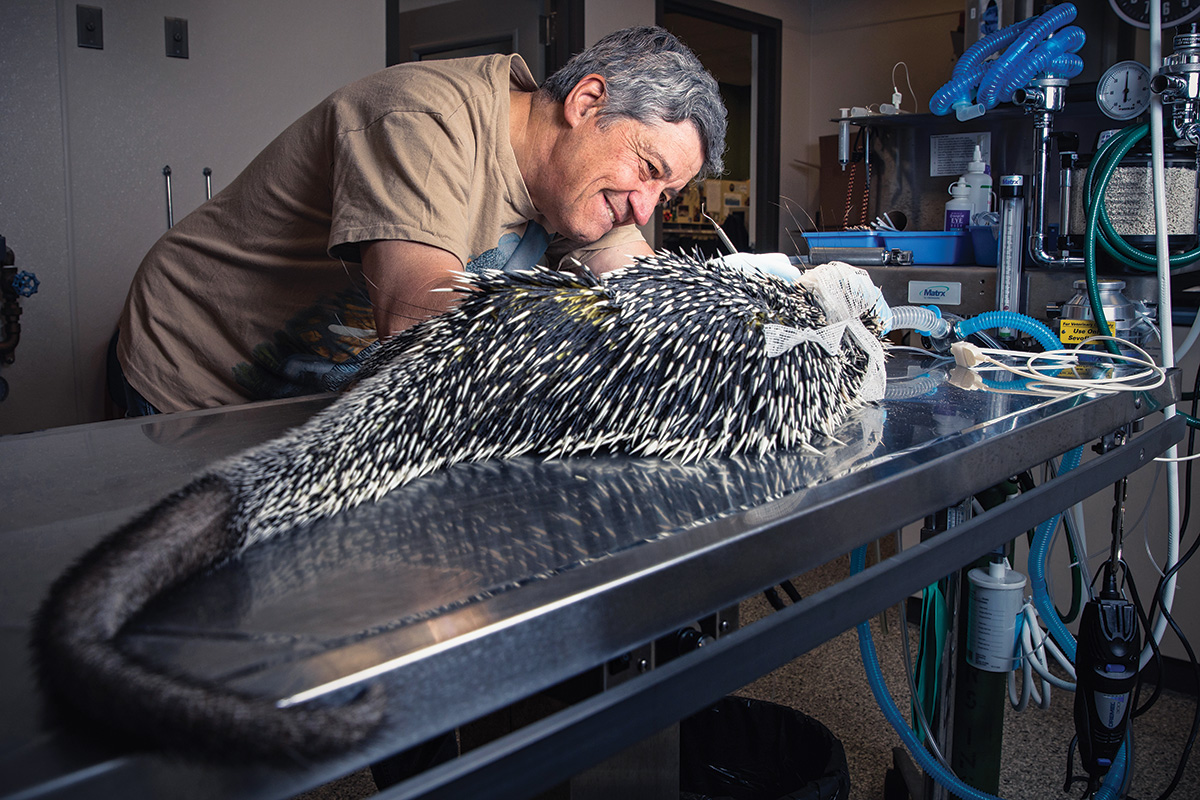 The zoo’s vet does the routine work while LoPresti focuses on the hard things: root canals and extractions for damaged teeth. “The animals are in concrete enclosures with iron bars and once in a while they get a tooth where they don’t mean to and they break. They don’t get a lot of cavities since they don’t get much sugar. I’ve seen only one cavity in a cheetah in all these years.”

Animal teeth are often much bigger than ours, so you can’t use most human dental equipment on them, LoPresti says. Many of the tools he uses at the zoo were developed for working on canines.

LoPresti enjoys learning about the animals he’s working on. For example, you can’t remove African wild dogs from their pack to work on them. “If you did, when you reintroduce that animal, they would kill it because they would think it wasn’t part of their group. The vets put three dogs in one cage across the aisle from the dog we’re working on. They had terrible teeth.”

He doesn’t have a favorite animal, but says for sheer size, polar bear teeth are cool. His first zoo case was a polar bear with a fractured tooth. Sloth teeth are bizarre: No outside shell of enamel and no pulp in the middle. And lemurs? They get bad buildup.
As an added benefit, when LoPresti’s children were small they accompanied him to the zoo and got a behind-the-scenes look at the animal hospital and some of the animals. Red pandas were his daughter’s favorite, and she still takes time off from work to see them when he works on one.

Kenneth Rawlinson: An ace in the hole

Kenneth Rawlinson, D.D.S., has a busy practice in Riverside, but he has something else to smile about: hitting a big final table at the Mid-States Poker Tour in Las Vegas last year, finishing seventh out of 4,600 players and taking home a big win. This May, he finished forty-fifth out of nearly 600 players in the Heartland Poker Tour in Chicago.

He started playing competitive poker when Foxwoods opened, but has gotten more serious (and better) in the last five years, traveling to tournaments in Vegas and Chicago. “The big boom in poker came in 2003 when Chris Moneymaker, an amateur, won the main event at the Series. Ever since then, every amateur has thought, why not me?” he says.

The World Series of Poker is the most prestigious poker tournament, a seven-day affair playing from noon to 1 a.m. every day. “It takes a lot of stamina,” Rawlinson says. “That last hour of the day when you’re getting tired is when a lot of mental errors happen. But it’s exciting so time goes by quickly.”

The adrenaline of the game makes for intense highs and lows. Rawlinson says it never feels good to bust out of a game, but if you’re good enough at least it happens when you’re winning some money. So while it’s disappointing on the individual hand, that goes away when you get paid.

He doesn’t attribute his success to a lucky rabbit’s foot or secret strategy. For him, it’s about continuously assessing his opponents, looking for tells, paying attention to their bet sizes and patterns and who can handle pressure well. He also tries to find out a little about what they do for a living to discern their risk tolerance.

“Under thirty players are the biggest risk-takers; they bluff a lot,” he says. “I would tend to call their action more often than I would, say, a banker.”

Not only is Rawlinson the official cosmetic dentist for the Miss Rhode Island/Miss America pageant, but several famous world class poker players are also his patients and he seeks their counsel. “I can always call them and ask about a hand, how it could have been played differently, where did I go wrong,” he says. “Continuous learning is key.”