The Story Behind West Place Animal Sanctuary in Tiverton

For Wendy Taylor, it began with an old Victorian and a love for animals.

It’s one of those fall days, a classic New England nor’easter sending the rain sideways. On the radio, I hear that wind gusts could reach sixty miles per hour. Driving past the white-capped Sakonnet River, I believe it.

My destination — a Victorian home sitting imposingly at the crest of a hill — appears almost ominous in this weather. I park and struggle with my car door, trying not to lose it to a gust of wind, then walk the rest of the way up the drive. I am looking at the outbuildings on this unusual property, wondering where I’ll find my host, when I see her: a tiny figure in coveralls and rain gear, smiling widely and waving as she strides up the hill. The wind and rain do not seem to bother Wendy Taylor in the least. 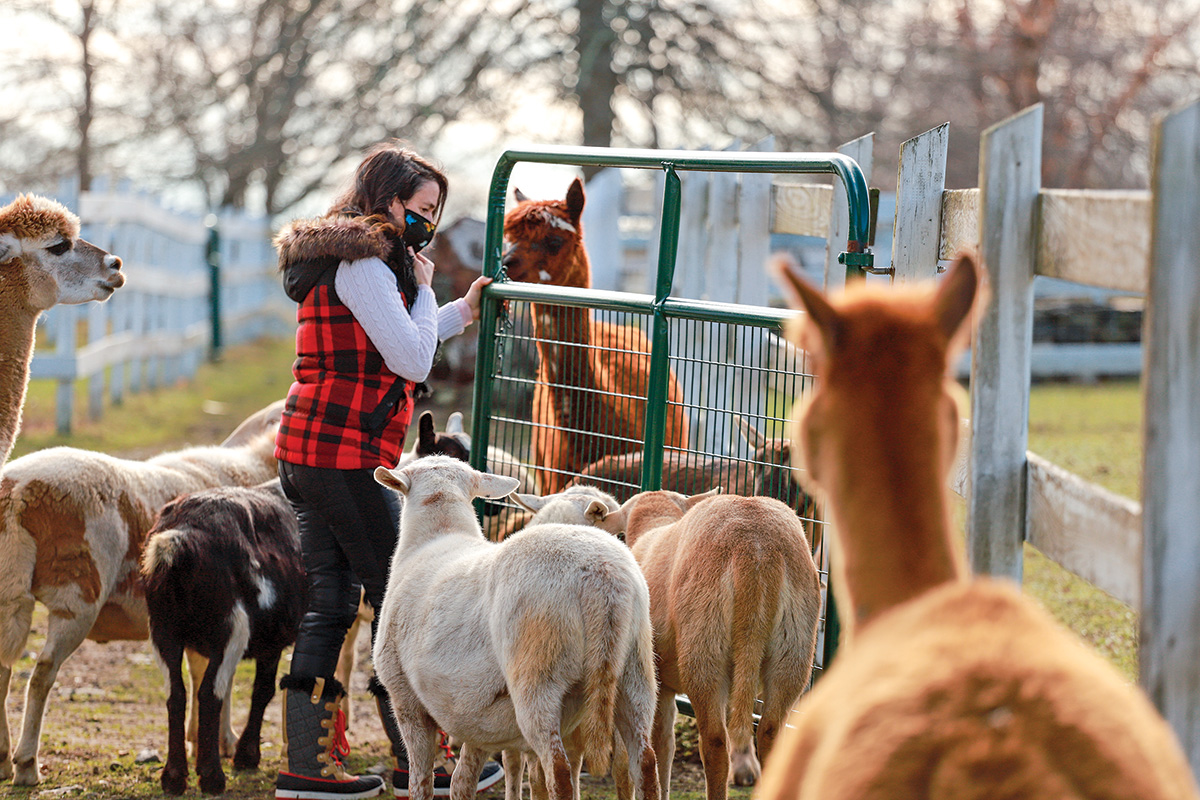 We sit in the small building that houses both her office and the kennels that serve Animal Control in the towns of Tiverton and Little Compton. Wendy, founder and executive director of West Place Animal Sanctuary, tucks her feet up beneath herself on her chair, and rubs her hands together. Maybe the weather has affected her a little bit. Still, there is that smile.

You can learn the general story of Wendy’s rescue, which works with law enforcement and other agencies in the absolute worst cases of animal cruelty and neglect, on the sanctuary website. Wendy, a lawyer for more than twenty years, wanted to do something to honor the memory of several beloved animals she lost in a fire at her home. What began as a personal effort to use her eight-acre property as a refuge for abused and neglected animals has grown over the years to an operation requiring more than sixty volunteers to care for more than 100 animals. Wendy left her legal practice to become a full-time fundraiser and advocate for the animals in her care.

That’s the obvious story and an important one, to be sure. But as Wendy and I talk, it becomes clear that several stories intersect at West Place. To really understand, you need to back up to the moment in time when a woman fell in love with a house.

“It was a disaster,” she tells me, describing the state of her Victorian home when she first saw it. “It probably was a disaster already when it went into foreclosure, but then people began breaking in, stealing copper pipes, vandalizing. Someone in charge of the property decided to rent it out so it wouldn’t be vacant. But the tenants soon became squatters, and as they were served with eviction notices, they became angry. They spray-painted, tore out walls and fixtures. They all but destroyed it.”

Wendy, however, didn’t see just the mess before her eyes. She’d wanted a big Victorian home since childhood, and this one spoke to her.

“The way the house sits on the land, sort of kitty-corner, looking off down the road,” she says, “there was just something about it. I’d been drawn by the acreage, but I knew the minute I saw this house that it was meant to be my home.”

There was one problem: By the time Wendy saw the house, it was already under contract with another buyer. Over the protests of the listing agent, who seemed exceptionally certain the purchase would go through, she put in a backup offer. Ten days later, at 9:30 at night, she got the call. The other buyer had backed out. The home she knew was meant to be hers, was hers indeed.

So began a period of time that was full of hard work, but that, in hindsight, Wendy describes as perfect. She ran her law firm. She renovated her dream home. She took care of her animals: dogs, cats, goats. One goat, Mo, was something of a medical miracle. He’d lost the ability to walk, but with Wendy’s advocacy and Tufts Veterinary Hospital’s medical skill, he’d had spinal surgery and careful rehabilitation. He walked again, but just once.

The day after Mo took his first post-rehab steps brought the call that changed everything for Wendy. While she was on the road, headed to work, her home caught fire. Nine animals — companions she loved dearly, two dogs, six cats and Mo — perished.

There is a shift as Wendy tells me this story: in her posture, her voice, her facial expression. She has told this story countless times over the years (her TedX Newport talk, “Capsized,” is an amazing presentation on reacting to the circumstances life hands us), and I watch as she works to regain the composure with which she habitually tells this tale. Because this is it: the genesis of West Place Animal Sanctuary, the lynchpin on which her life turned completely. This is her “why” and, of necessity, she has become practiced at sharing the story.

But in that flicker of an instant, I see the way her story connects to all of ours. It’s that aspect of life that we all find so unnerving, the way we can think we have matters well in hand and then, in an instant, the ground opens beneath us. She’d thought she was solidifying her connection to her property as she, fully in control, renovated the old house of her childhood dreams. But it was when she went down to the pasture, shovel in hand and the unthinkable now her reality, that the bond became indelible. Digging nine final resting places was not part of her plan. The way forward, she realized, was going to have to come from something greater than herself.

“Our lives aren’t defined by what happens to us, but how we choose to handle what we’re given,” she told the TedX audience. “Was I given a fate? Or was I given the opportunity to make a difference?”

Those nine resting places are just a short distance from another interesting feature of the West Place property: Rhode Island Historical Cemetery No. 49. Graves date to the 1700s, a thing Wendy began to think of in a different way.

“It’s bigger than us,” Wendy tells me. “My husband and I say that all the time now. Everything about this property is bigger than us. Those people buried in that historical cemetery — they remind me of that every day. They were here 100 years before the house I live in — a Victorian-era house — went up. One hundred years! Think about that.” The smile is back, tinged with awe and a shake of the head. “We’re just stewards of this property, and the sanctuary is part of that. Hopefully we’re conducting our stewardship in a way that will enable the sanctuary to operate for a very, very long time after we too are gone.”

The passage of time is an essential part of the West Place story. It was at least four years after the fire when Wendy began to work in earnest at establishing West Place Animal Sanctuary. It is now more than thirteen years since it became a nonprofit serving animals rescued from neglect and cruelty. There is a thread that runs through it all, making the notion of stewardship seem exactly the right term. From the time the house was constructed in the early 1800s, it was known in town as “the Dr. Samuel West place,” and from that designation, Wendy’s sanctuary takes its name. Dr. West’s predecessors in title lie in rest within the walls of that small historical cemetery. Wendy’s nine pets have been joined in their burial ground by residents of the sanctuary who grew old and passed in the comfort and safety of a home dedicated to their well-being.

My conversation with Wendy Taylor has meandered, not unlike the way old New England roads wind among farmhouses and fields. We bundle up for a quick tour of some of the more unusual features of the property. The wind has not let up, and I raise the hood of my jacket against the rain. Volunteers are at work all around, tending to animals safely out of the weather, and I can’t help but think that, if not for a tragedy, none of this would be.

We say our goodbyes and I drive off down the road, the Victorian on the hill receding in my rearview mirror, its windows almost like eyes that watch as I make my way back home through the storm.