Here at reds HQ, we love a good video game as much as the next nerd, but even we were impressed by the quick thinking of Pawtucket resident and Grand Theft Auto enthusiast, Charles Kendrick. Kendrick was deep into a session of GTA, playing stark naked at 2 a.m. (because, really, who doesn’t) when he heard a suspicious, grinding noise outside his house. 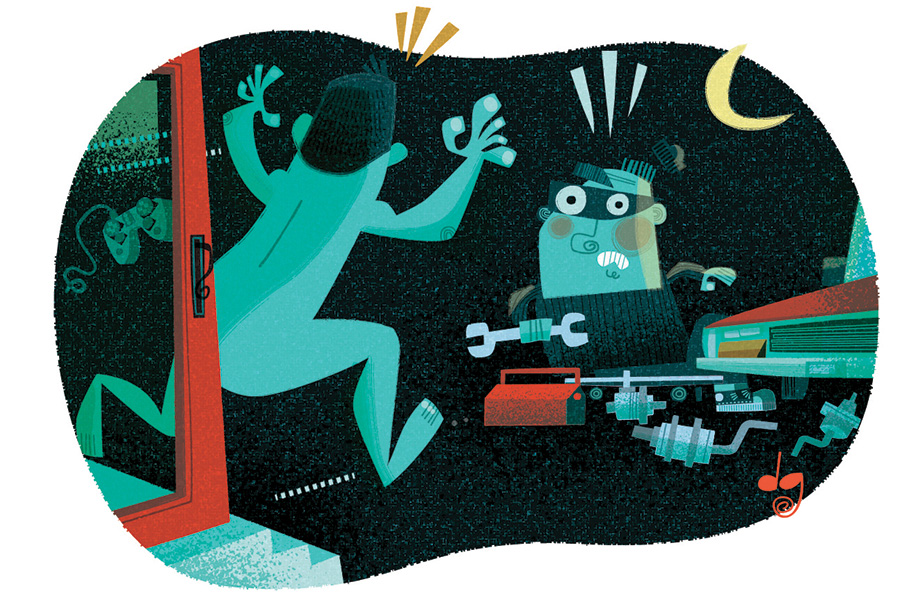 Turns out some stranger was under his silver-gray Hyundai with a Sawzall, boosting the catalytic converter. Not one to waste time getting dressed, Kendrick charged outdoors, au naturel, and wrestled the perp to a draw. Alas, both the thief and the converter got away. “I wasn’t the first one of that night,” Kendrick pointed out, “but I guarantee you I was the last.” So let’s hear it for the Bucket’s leading naturist who proved once again that not all heroes wear capes, or even clothes. Nice going, Gamer Guy!

We couldn’t make this stuff up.

True!
Six Rhode Islanders were charged with defrauding several states of hundreds of thousands of dollars in unemployment benefits by claiming, among other things, they’d worked as a “babysitter” or “travel barber.”

True!
A Providence man was charged with creating a fake catering company, buying and reselling $831,000 in lobster, shrimp, scallops, filet mignon and wild boar and scamming several local restaurants as a result.

He then allegedly rammed his Mercedes into an FBI vehicle before disappearing for more than a week.

He was finally caught at a hotel in Massachusetts.

True!
A Cranston man pleaded guilty to leading a multi-state conspiracy that stole nearly $700,000 in construction equipment, three Bobcat excavators, ten jet skis, two sport fishing boats along with a twenty-two-foot Sea Ray, eight ATVs and fourteen trailers. Prosecutors said the crew cased out dealerships and marinas “under cover of darkness” in South Kingstown and Tiverton, among others.

True!
Three men including a Providence auto repair shop owner were arrested on charges they rolled back odometers and forged registration documents.
Police discovered fifty vehicles the trio advertised on Facebook Marketplace had been tampered with.

Quotables!
“We’ve paid more than $400,000 in union dues for people that don’t exist.”
Onetime Providence school superintendent Harrison Peters about a complicated multiyear contract provision that compensated the teachers’ union for teachers who were never hired.

Another reason to hate Facebook.
Perry Phillips and Benjamin Foster were each fined $5,000 after they recorded themselves launching red distress flares on Block Island, then posted the video to social media. The flares, which are a maritime distress signal, launched an hours-long Coast Guard search by boat, along with two helicopters, to the taxpayer tune of $103,948. The friends thought launching flares would be a cool way to be seen by guests at a friend’s wedding, according to a complaint filed by the US Attorney, who agreed to settle the case when the wedding guest wannabes paid the fines.

How you doin’?
According to recent surveys, Rhode Islanders are the rudest people in the country, prone to mediocre tipping and jerky driving habits. We also have the highest percentage of people who are unhappy at work. Which may explain why Providence is number 110 on the country’s list of hardworking cities. On a brighter note, our fair state capital comes in at eighty-seventh on Wallethub’s list of most fun cities!

Say it ain’t so, Joe.
Former state rep and perennial candidate Joe Trillo said he’s considering running for lieutenant governor in 2022 as a Republican. “I’m leaning more positively toward doing it,” he told 12 News in October. “But at this time, I don’t have my ducks in a row to do it so I’m not ready to commit.” A Republican hasn’t been elected to the state’s second top spot since 1966.

Finally, a list where we’re number one!
Two guys from Warwick and Massachusetts pleaded guilty to attempting to commit bank fraud and failure to appear in court, after an investigation found the duo had tried to cheat the government out of hundreds of thousands of dollars in pandemic-related small business loans. The duo falsely claimed they owned businesses with large payrolls including Top of the Bay and the Remington House restaurants in Warwick, and were the first in the country to face fraud charges in connection with the federal loan program.

Turns out there’s more than one jackass on the road.
A runaway donkey was reunited with its owners in Scituate after being on the lam for more than four months. One sighting put the runaway donkey in the right hand lane of Hartford Avenue, in (of course) Johnston, not far from where the renegade wild turkey posse was rampaging around town four years ago.

Quotables!
“They need to go back to the drawing board, fix them and adjust them.”
City Council President John Igliozzi in response to new speed bumps installed on several Providence streets, causing damage to motorists’ cars. At a reported height of roughly five inches, the ones at the end of the Henderson Bridge were especially voracious.

Because nothing says “Welcome to Summer” like a good beach brawl!

Item one, Narragansett, May 23: Eight people, mostly high school kids younger than eighteen, faced charges after a crowd of roughly 500 got into a commotion at the beach, with a fight breaking out in the cabana parking lot around 2 p.m.

Item two, Westerly, June 6: Four people were arrested for disorderly conduct after a fight at a Misquamicut beach bar. Police said one person was hit with a bottle and went to the hospital.

Item three, Lincoln Woods, June 6: According to the DEM, some fifty people, mostly young adults, got into a fight on the beach around 7 p.m. Officers from several departments and the state police were called to the scene. There were no arrests.