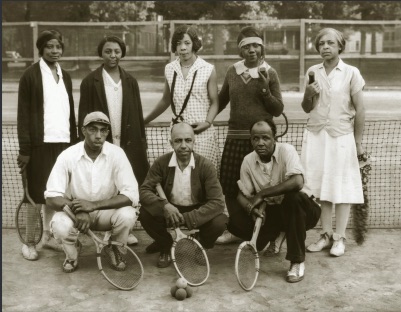 Photo from the Tennis Hall of Fame’s Breaking the Barriers exhibit.

This February, tune into Newport, Rhode Island’s Tennis Hall of Fame’s free online lecture series to learn about the history and cultural impact of Black tennis in Rhode Island and nationwide. Join historians Robert Cvornyek and Keith Stokes on February 17 at 7 p.m. for an illuminating presentation on Black Tennis History in Rhode Island. The two presenters will delve into the role tennis clubs played in fostering community and strengthening racial identity among African Americans in Newport and Providence in the early 1900s.

The following week, on February 24 at 7 p.m., Damion Thomas, the Sports Curator at the Smithsonian’s National Museum of African American History and Culture, will discuss the accomplishments of tennis superstar Althea Gibson. Not only did Gibson win numerous prestigious tournaments, such as Wimbelton and the French Nationals, but she also was the first African American to compete in these tournaments. Her legacy continues and this lecture will focus on the impact her life had on the gender and racial dynamics of the sport. To attend these free virtual lectures, register in advance.

Welcome the First-Ever Black Business Week With Your Support