The Rhode Island artist earned runner up on "Ink Master: Battle of the Sexes."

Because of a strange law about tattoo parlors in the Ocean State, 1001 Troubles Tattoo is the only tattoo shop in Warren. One of its most popular artists is twenty-eight-year-old Dani Ryan, a modest, down-to-earth, raven-haired RISD graduate from Acushnet, Massachusetts, who recently claimed the runner up spot in season 12 of Paramount Network’s “Ink Master: Battle of the Sexes.”

1001 Troubles Tattoo is filled with light coming through the front windows and walls are lined with work from other artists. Normally, punk or metal music from the early 2000s plays in the background, the sound bouncing off the ocean-colored walls. Ryan could easily double as a makeup artist with her “Unicorn Blood”-red lips and expertly highlighted cheekbones and eyes. She has a few tattoos of her own, but aside from the small, tasteful ones on her hands and wrist, the rest are hidden from plain view. On the far wall of Ryan’s station within the shop is a massive poster of her own design of a Valkyrie (a female maiden who handpicks warriors slain in battle and decides who will ascend to Valhalla). She reflects on her experience on the show, now that the season has already aired and she can fill in the blanks. 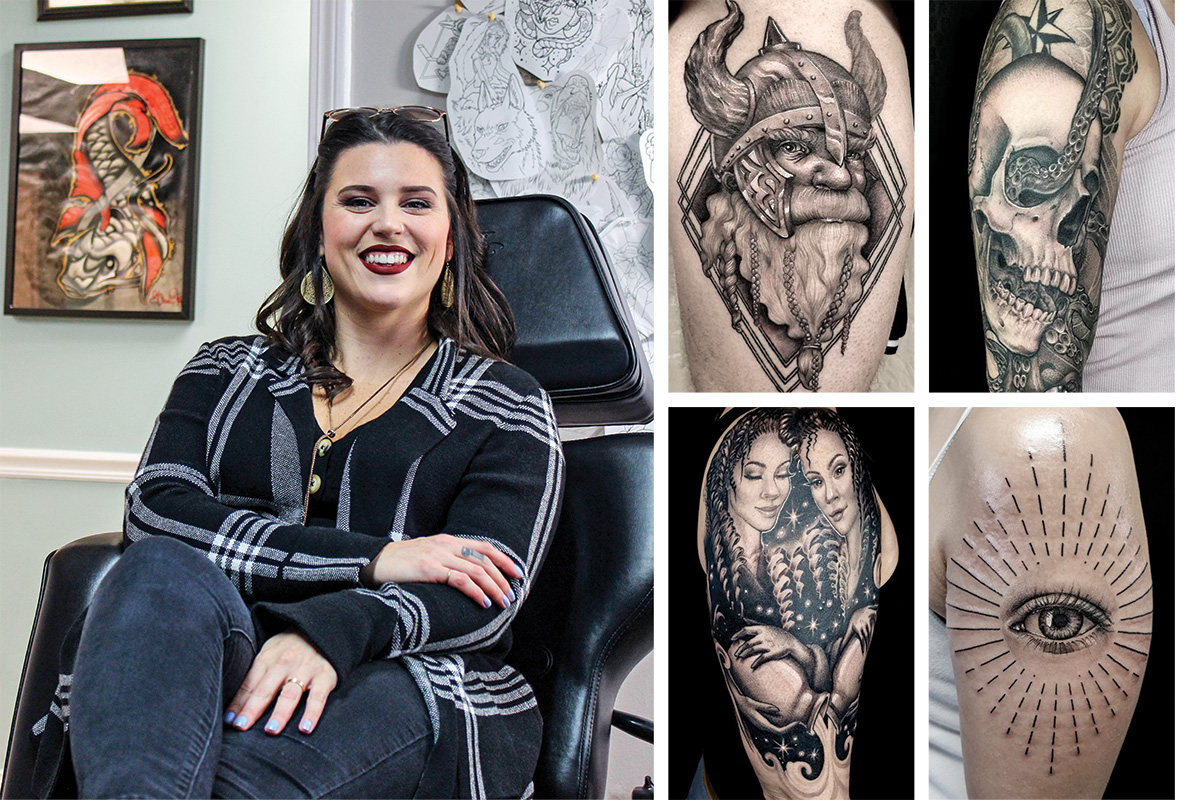 “It was stressful. Very stressful,” Ryan says. “The most stressful thing was getting designs done within the amount of time that you needed to get it done — like, ninety minutes maybe?”

She didn’t think she’d make it as far as she did. “I had no idea who I was going up against, and I was expecting to not be able to keep up, at all,” she says.

Most other contestants wrote Ryan off because of her comparative lack of experience. Some contestants had more than twenty years behind the needle, whereas Ryan had only been tattooing for two and a half years.

“[Before “Ink Master”] I was only doing things that people were asking me to do. I showed up like, ‘Yeah, I do some flowers.’ Nothing I had been doing was particularly threatening. It wasn’t like anybody cared that I had been to art school.”

Ryan, with her RISD degree, was in good company; the winner of season 12, Laura Marie, also has an art degree. The show helped Ryan learn new skills and apply them to her career as a tattoo artist.

“The show really forced me to work on color. I was so used to doing black and gray, linework and that sort of thing….” she says. “I was open to it, and I didn’t want to stick to black and gray forever, but I was afraid of it. It forced me to step out of my comfort zone and try this whole new thing and now I love doing color.”

Ryan didn’t just step onto the “Ink Master” stage for her own benefit.

Dani Ryan’s appointment book is currently closed, but she plans on reopening it soon. 1001troubles.com