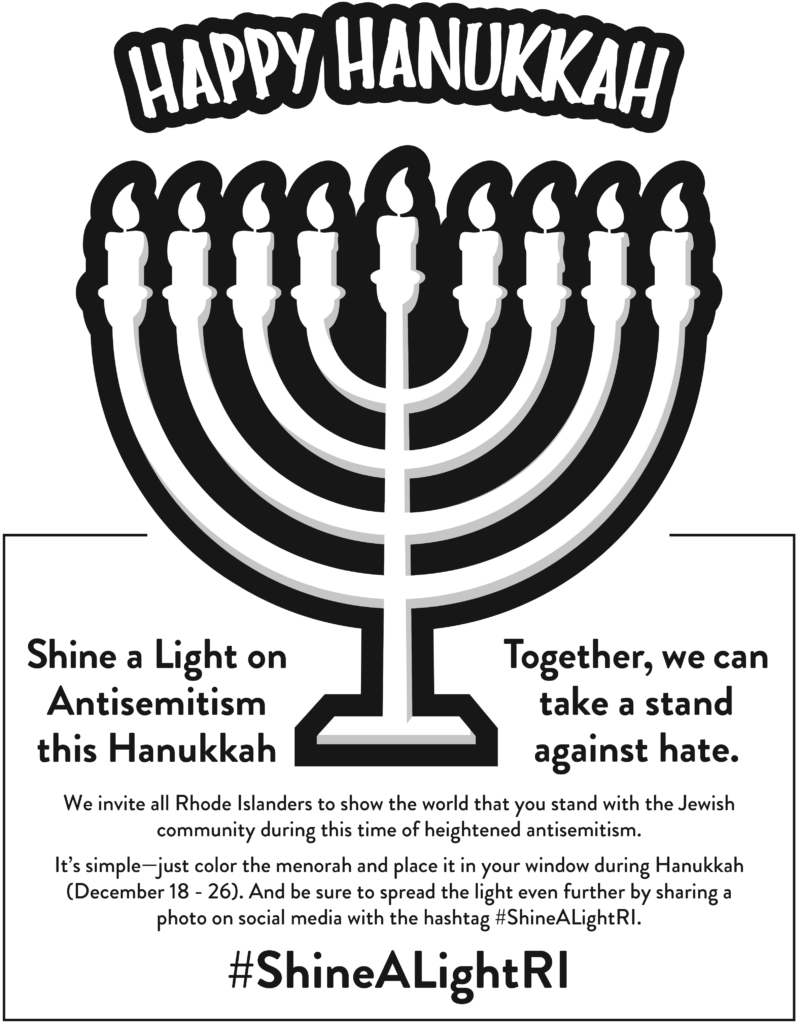 As many are most likely aware, lately there has been a disturbing increase in antisemitic incidents, not just on a national level, but also locally. To combat the hate and give Rhode Islanders the chance to show their love and support for the Jewish community, the Jewish Alliance of Greater Rhode Island and the Sandra Bornstein Holocaust Education Center (in collaboration with other local agencies and synagogues) has launched #ShineALightRI.

According  to the December issue of Jewish Rhode Island, the idea for the grass-roots campaign came about when Stock Culinary Goods owner and president of the Hope Street Merchants Association, Jan Dane, asked Rachel Mersky Woda, the director of Youth and Family Engagement at Temple Beth-El in Providence, asked how best to include the Jewish community in upcoming holiday celebrations. At some point during the conversation, the subject of antisemitism reared its ugly head, and Mersky Woda referenced an incident in the mid-90s where a brick had been thrown through the bedroom window of a six-year-old boy in Montana — right where he had proudly displayed a menorah for Hanukkah. The local newspaper went on to print a full-page menorah for community members to cut out and place in their own windows. As Mersky Woda writes: “The message was clear: The irrational hatred of a few cannot destroy the bonds of our community.”

The simple yet impactful act has inspired many a community over the decades, and now it is the Ocean State’s turn to spread the light. To show your support, all you need to do is print the above graphic, color in the menorah and then proudly display it in your window during Hanukkah, which takes place this year from Sunday, December 18, to Monday, December 26. The graphic is available for download on the Jewish Alliance’s website here, and they encourage those participating to spread the support even further by sharing a photo of their customized menorah on social media with the hashtag #ShineALightRI. As you shop this holiday season you will also find that many small businesses have copies of the menorah and a #GetLoudSpeakOut sticker. As the Alliance states, “Together, we can take a stand against hate.”