The singer brings a little Las Vegas to local audiences.

Steven Palumbo’s voice folds like a silky glove around the strains of “Lady Love,” a Lou Rawls hit. Palumbo, a dark-haired, forty-eight-year-old former school teacher who now sings for a living, sways to the beat, dapper in a navy-blue blazer and silver tie. A woman walks in the door, catching Palumbo’s eye. He winks, waves and when the song is over, gives her a hug.

“Hey, everybody!” he calls out to the Thursday night crowd at Parma in Smithfield, where he regularly sings to a dinner crowd. “We went to Classical together!”

Only in Rhode Island. And not only in Rhode Island is where Palumbo plies his trade, growing up on Academy Avenue in Providence, discovering his gift of song at age ten, singing with the Barrington Boys Choir with full support from his parents driving him to rehearsals three or four times a week. He eventually performed with Twyce, a Motown tribute quartet from Rhode Island that played places like Foxwoods Casino. The former special education teacher gave up the sanctity of steady pay two years ago, swapping his desk for a microphone to pursue singing full time. “I always wanted to do this full time but didn’t have the courage to do so until I was in my forties,” he says. 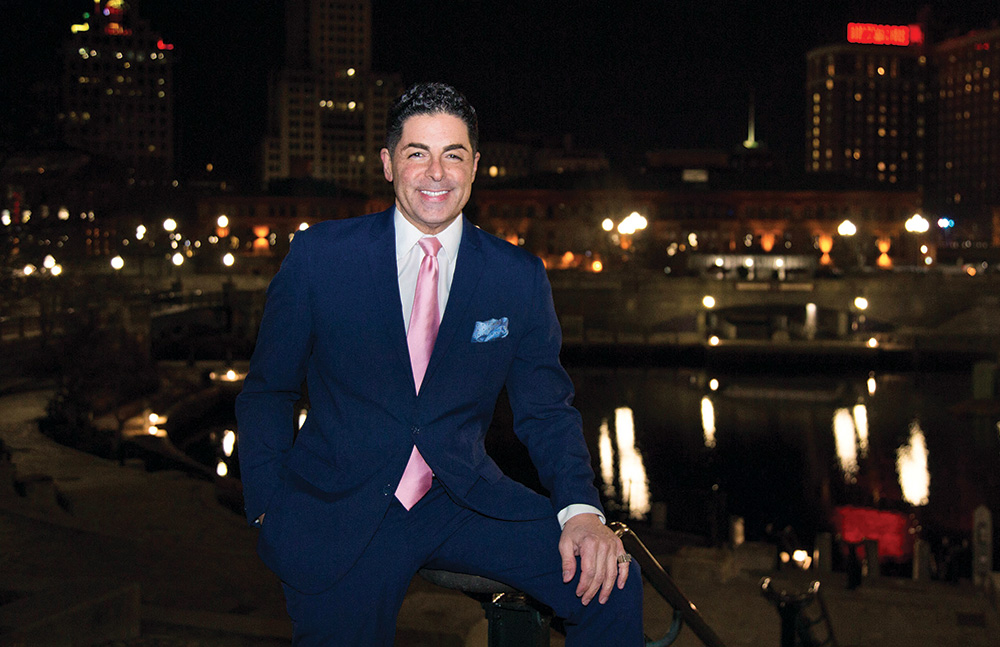 Palumbo is known for his portrayal of Dean Martin in a “Rat Pack” ensemble that plays up and down the East Coast, studying Martin’s moves, mannerisms and breezy style on old tapes and getting into performances wielding a cocktail and wearing a tux. Dino is a small part of his performance routine, which involves mainly singing solo in places such as Parma, Cucina Rustica and Chapel Grille, both in Cranston, Via Roma on Federal Hill, Twin River in Lincoln and in summer, Spain of Narragansett.

He has performed all over — the Waldorf Astoria in New York, opening for Howie Mandel; a bash for Warner Brothers’ executives in Maine; and even in the United Kingdom, singing at the funeral of the mother of someone he met on a cruise ship. He’s also sung at weddings with his brother helping out by running sound.

Palumbo counts tiny Parma as “my home base,” setting up near the door, waving to regulars and never missing a beat, crooning tunes with the genuine passion of a man singing for his supper, knowing there’s no place he’d rather be on a chilly Thursday night than a dark Italian restaurant on a busy stretch of Putnam Pike.

“I just want to maintain some of the child-like enthusiasm I had when I was ten and first decided to sing,” Palumbo says. “That kid made one of the most impactful decisions of my life.” stevenpalumbo.com