Garden Inspiration: Secrets of the Shade

A well-curated garden on the Point in Newport shows how dramatic shade can be.

Humble Beginnings
The fence that conceals the backyard of this modest Newport home is much like a theater curtain. When the gate is opened, the reveal is dramatic, the scenery spectacular and the illusion of being transported from one world to another complete.

In 1982, when Ann “Annie” Ritterbusch bought this house, this theater did not exist. Neither the house, nor the backyard, were worth bragging about, and she has the pictures to prove it. The yard, especially, was less than promising, she admits. “It was weeds, trash and grass,” she says. “Absolutely nothing else.” 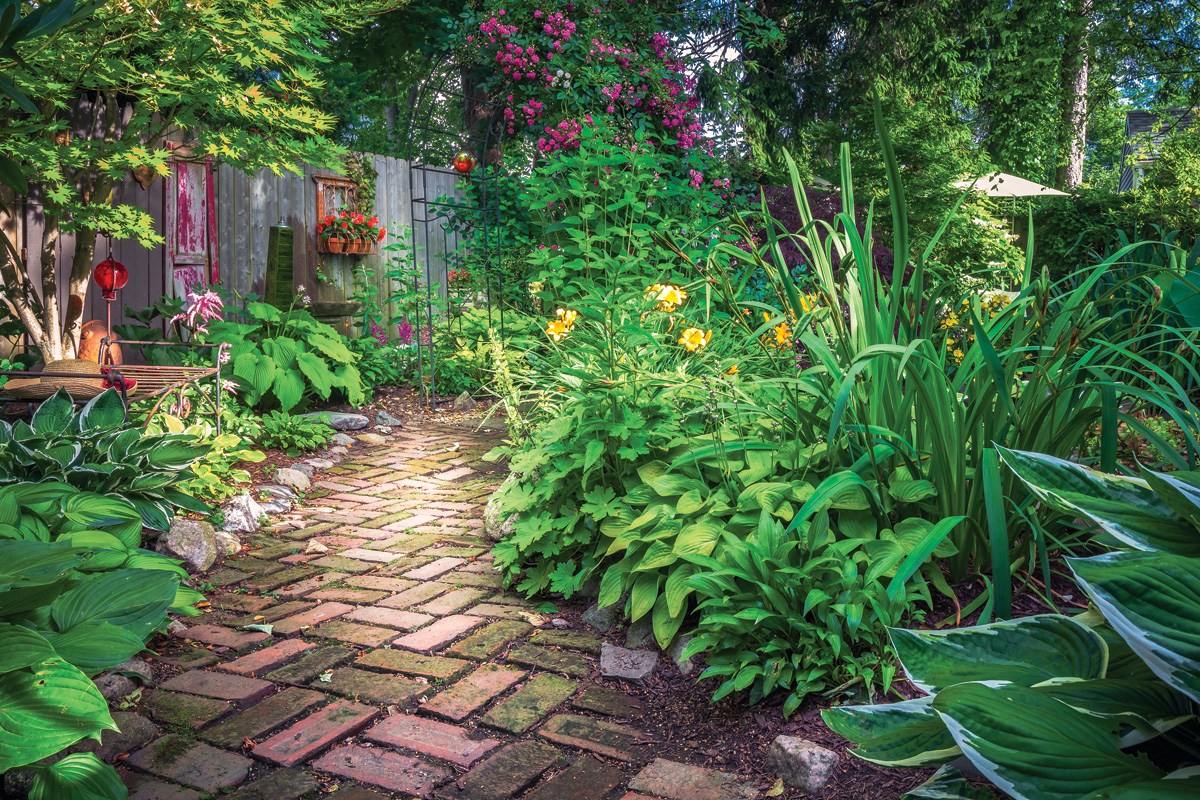 Throughout the garden are various found metal objects Ritterbusch has scavenged over the years. Photography by Wolf Matthewson.

Once she finished renovating the house, she took on the yard. Although Ritterbusch’s father had kept a vegetable garden when she was a child and her grandmother had gardened, she was a “total neophyte.”

“I took a big rope and I outlined this wavy garden in the back in the midst of all the grass,” she says. “Over the years, the garden grew and the grass disappeared.” 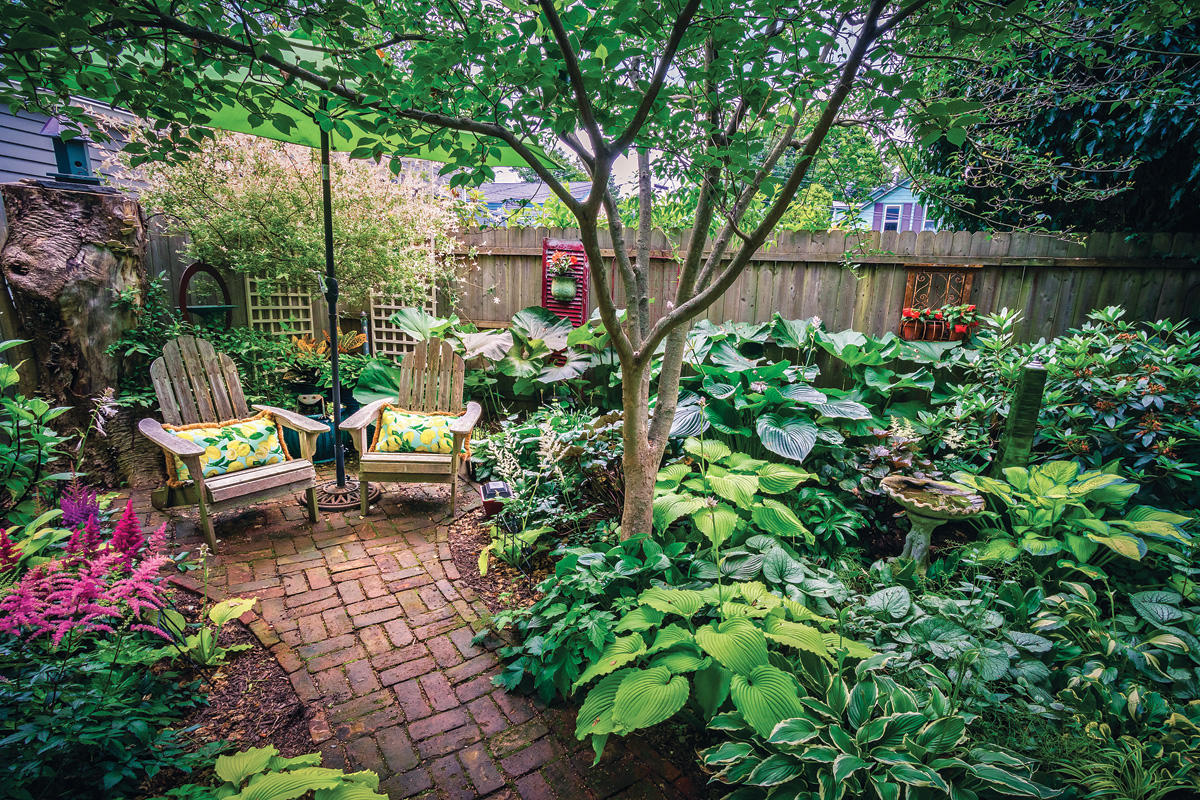 A Japanese willow blooms between two pieces of lattice along the fence. Photography by Wolf Matthewson.

Change is Good
In the thirty-plus years since she started, Ritterbusch’s garden has evolved organically.

The pond is a good example. “I started out with a little tiny pond, one of those prefab plastic ponds that you stick in the ground, and some goldfish,” she says. “I was doing Big Sisters at the time, and my little sister helped me dig it.” Since that first iteration, the pond has migrated, expanded several times, and Ritterbusch has progressed from goldfish to koi. 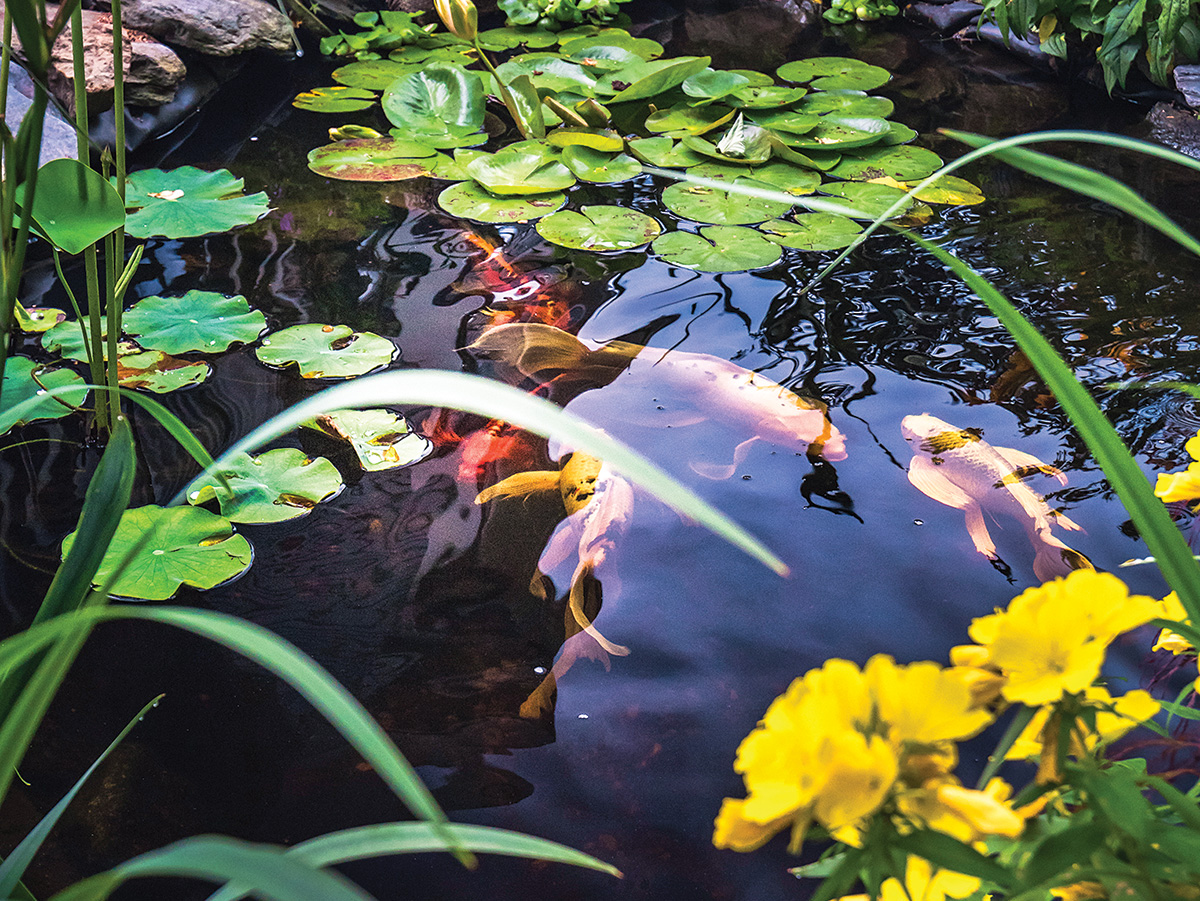 The pond is home to koi, a lotus, perennial water lilies and water hyacinth. Photography by Wolf Matthewson.

The brick path where the two Adirondack chairs are located was a beautiful solution to an unfortunate problem. One winter, a broken wrist and torn rotator cuff limited her activity and her ability to monitor her dogs’ activities in the backyard. “There was one area where I couldn’t grow anything, so I put in the path.”

Ritterbusch’s approach is fearless and free-spirited. “Why not try it? If I don’t like it, or the plant doesn’t like it, I look at the plant and I say, ‘Sorry, it’s moving day,’ and I move it.” 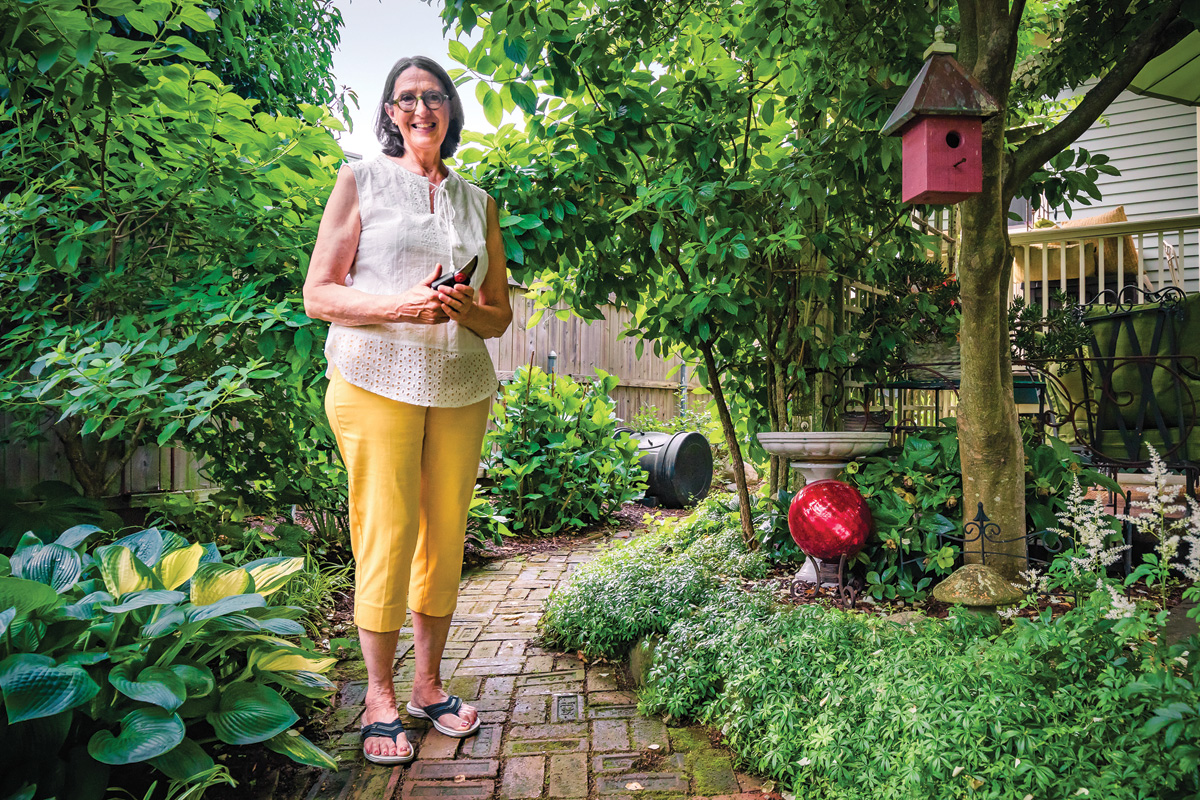 Visible on the ground behind Ritterbusch is her compost barrel. “I’m not terribly good at it, but I try.” Photography by Wolf Matthewson.

Green Goodness
The natural canopy created by Ritterbusch’s own trees — there is a dogwood and a Dura Heat river birch, among others — and her neighbors’ maples contribute to the other-worldly feel one experiences in her backyard garden. That canopy has also influenced the types of plants she grows, which are primarily shade lovers. There are pops of color from potted begonias, climbing roses and astilbe, but most of the garden is a marvelous and varied display of green. There are about “forty-some-odd” types of hosta and large leafed petasites, which look as if they have been transplanted from the jungle. On the other side of the yard, a Jordan Japanese maple flaunts feathery chartreuse leaves through the spring and summer that eventually burn bright yellow and orange in the fall. Near it is an old rhododendron that Ritterbusch continues to play with year after year.

One of her favorite plants is the lotus blossom in the pond. “The New York Yacht Club has a whole pond filled with them. I love seeing their lotus blossoms, but the bottom line is I have my own.” 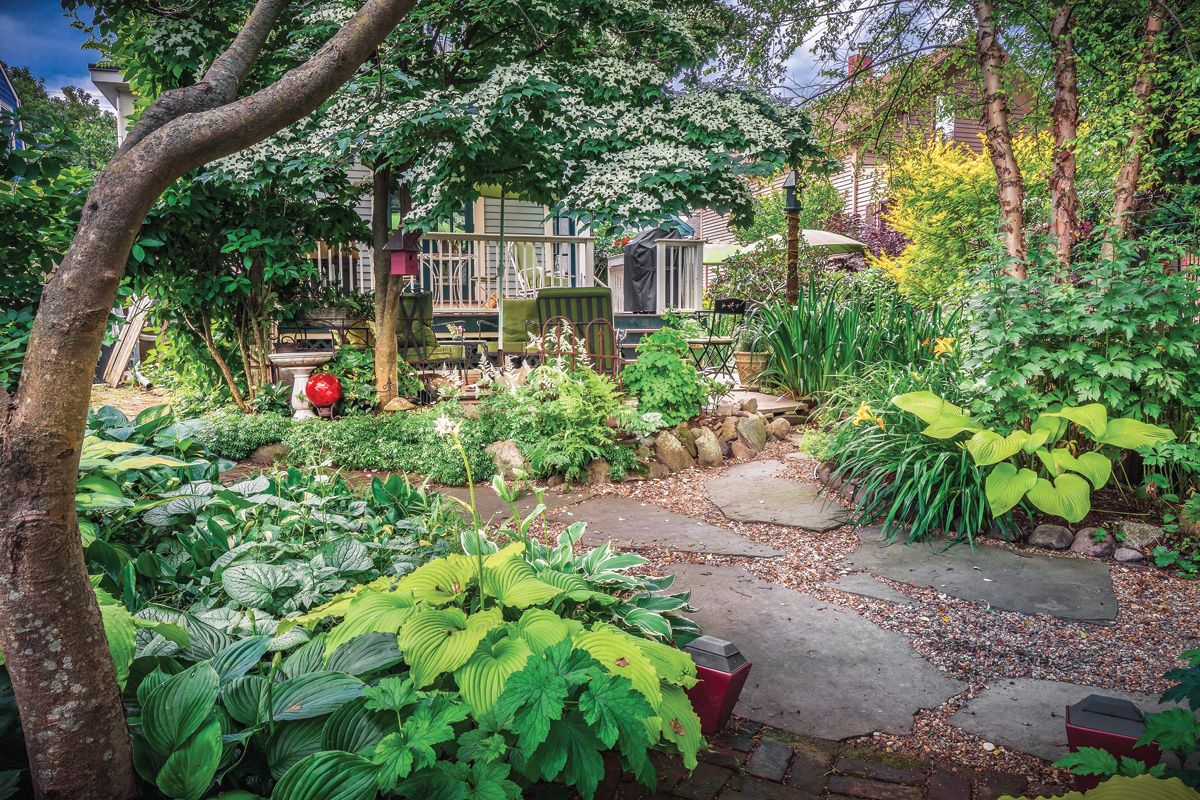 “The male house wren builds multiple nests and the female gets to choose which one she wants to live in. I have multiple birdhouses around, but they always seem to end up in the same one,” she says. Photography by Wolf Matthewson.

Work and Art
“My house is a two-family, and my apartment isn’t that big, but in the summertime, it’s huge.”

The brick patio becomes her dining room and the wooden patio next to the pond becomes her living room. “My two little Adirondack chairs are where I sit when I want to be quiet and have a cocktail and just look at everything.” 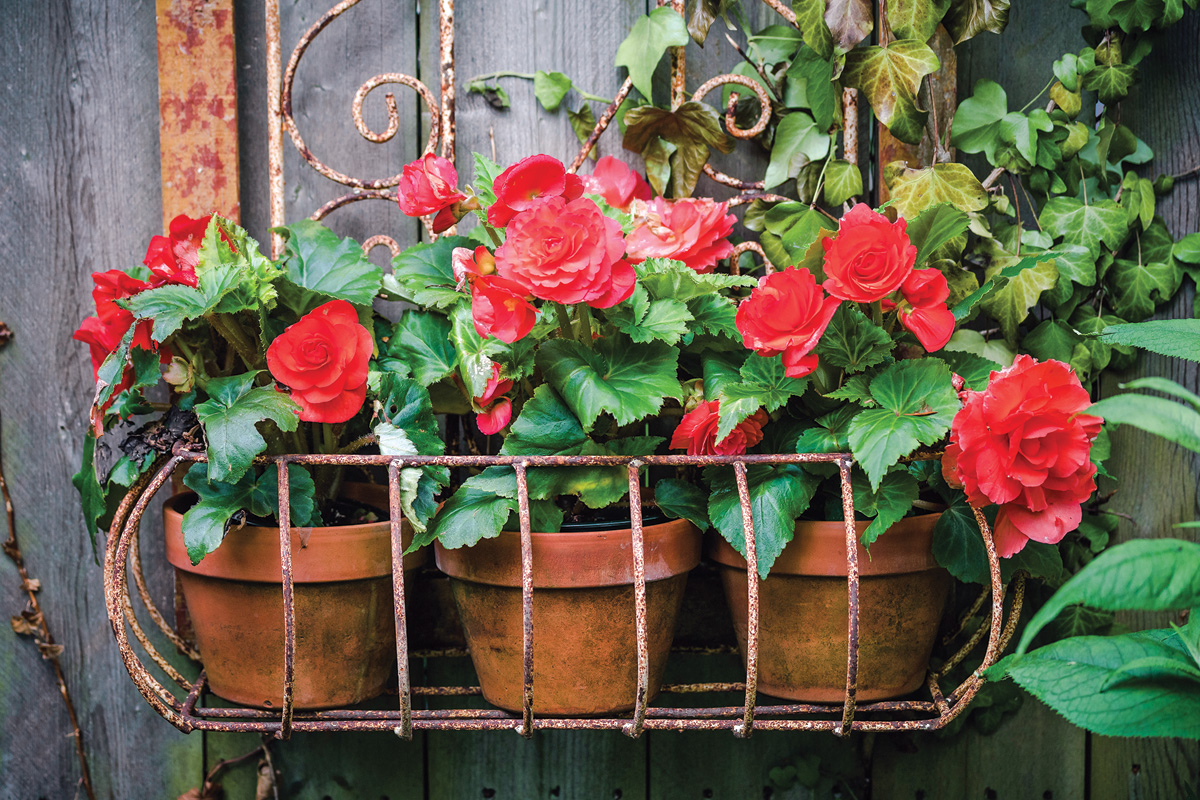 While the garden is primarily green, plants like these potted begonias add color. Photography by Wolf Matthewson.

Getting the garden to the point where she can simply sit and enjoy it takes about a solid month of work. The promise of the annual June Newport Secret Garden Tour, which she has hosted for about twenty-five years, always motivates her to get it done. Although she now works as a realtor, Ritterbusch taught elementary school for nine years and she believes strongly in the value that art programs contribute to public schools. Since 1984, the tour has raised more than $1 million for art, music, theater and other cultural programming in Aquidneck Island public schools.

“My father was very artistic. I think this is my way of painting. I paint with plants and fish, I guess.”

36 Fun Things to Do in Rhode Island this February