Save These Old Houses: Brown is Selling Three Colonial Revival Homes for $10 Each

The hitch: You have to move them.

To make space for a new dormitory, Brown University in Providence is selling three Colonial Revival-style multi-families on its land for $10 each.

“The sale will be contingent upon the ability of the applicant to move the existing structure(s) from its present site and preserve its historic character,” reads the application packet. “Each house is listed in the College Hill National Register Historic District. Preference will be given to proposals that relocate the buildings to sites in Providence that are in keeping with the architectural scale and character of the buildings.”

To get a sense of what moving a big building looks like, we consulted Reggie Cooper of Aquidneck Building Movers and Riggers. Cooper’s been in the business for more than forty years, and he’s seen it all. He moved Station 10, an historic New York Yacht Club clubhouse, via barge from Mystic, Connecticut, to its current home at Harbour Court overlooking Brenton Cove in Newport. The building, a one-room Gothic Revival structure, had — if you can believe it — already survived two prior moves from New Jersey to New York, then New York to Mystic.

Nowadays, a majority of his work involves jacking up homes for new foundations or moving them back a few feet in flight of the rising sea. He says he only does one or two big road moves a year. 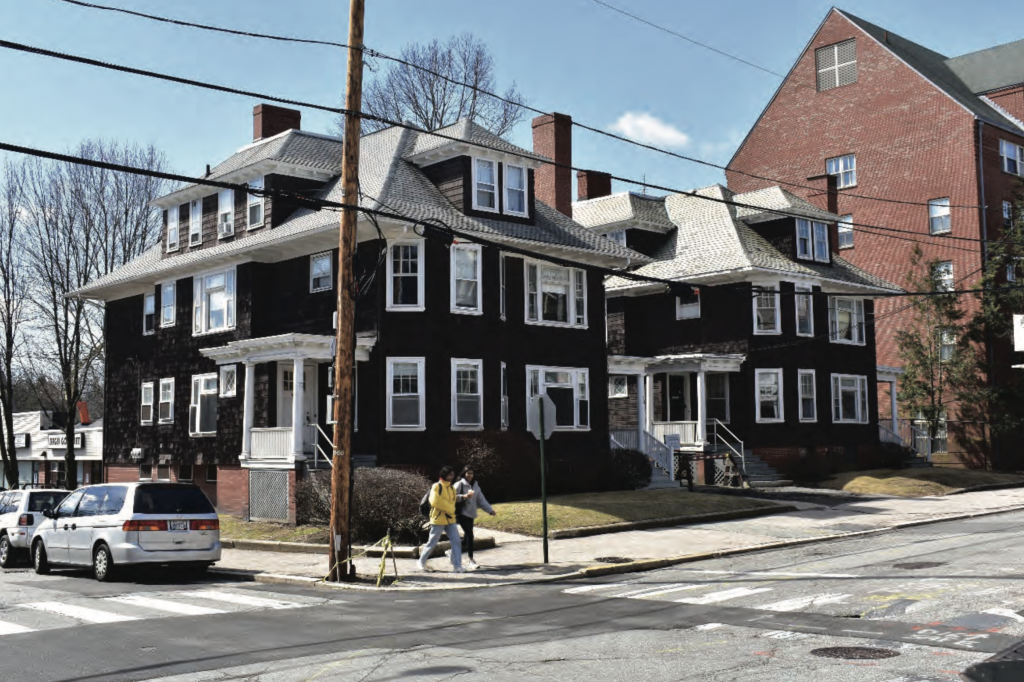 A view of the corner of Brook and Charlesfield streets. Both brown houses are up for grabs.

Then, almost concurrently, you have to make sure the house can fit down the road from the original site to the new one. You must consult with utility companies to determine if wires must be moved and what that might cost. You need to see if city trees will be affected — a major criterion in the application packet, which states: “The move route will also be carefully evaluated to assess the impact to street trees, residents and businesses.”

Companies like Cooper’s can help coordinate the information-gathering stage of the move. If the lot is close by — a block, maybe, Cooper says — it could be worth it. Brown, too, is prioritizing applications that will re-site the structures in the College Hill neighborhood. But a city move will be complicated, Cooper says.

“It’s not like the old days with nothing in the way,” he says. “I get houses in Newport worth half a million dollars and they tear them down. You can’t move them anyplace.”

If an applicant is lucky enough to establish a lot and a route, Cooper says, a building mover then must consider what sort of beams are needed inside the house to move it safely and if there are fireplaces, which require additional supports. (All three Brown houses have fireplaces.) Then, a foundation on the new site must be dug.

Moving houses is a costly endeavor but, Cooper says, “I can do it — put it on a barge and stuff like that — but when you’re done, you could buy three of them.”

With the brevity of a person who knows, Cooper adds: “Some people got more money than brains.”

In the case of the Brown houses, saving such structures sure beats razing them, though Brown — which owns an exorbitant amount of property in College Hill/Fox Point — “reserves the right…to reject any and all proposals.” The university has also pledged to offer up to $75,000 to defray the costs of the move.

Would you save these old houses? Take a look: