Is RI History at Risk in the State Archives?

The state's most important documents have barely withstood decades of transience, moisture and fiscal apathy.

A letter to the editor of the East Greenwich Pendulum, reprinted in the Providence Evening Telegram, March 7, 1887. Head: “The Woman Suffrage Craze.” Sub-Head: “East Greenwich Won’t Have It — Not Good for Women or Men.”

First paragraph:
“A great deal used to be said about ‘woman’s sphere.’ But that is changed now and neither law nor custom prevents women from engaging in any occupation that she may select to assure her livelihood. It is very doubtful that the sum of human happiness, and especially the happiness of woman, would be increased by placing the ballot in her hand and inviting her to take a place and jostle with men in the filthy arena of politics. It may be correct in theory, but who wants his wife, his mother, his sister to be a deputy sheriff, a police constable or even a Representative in the General Assembly?”

After decades of advocacy, women’s suffrage proponents persuaded the Rhode Island General Assembly to put before the voters a bill that would amend the state Constitution to give women the right to vote. A torrent of anxiety poured onto newspaper editorial pages. Allowing female persons access to democracy would upset the natural order, strip men of their refuge from the “dirt and turmoil and bad blood of public affairs,” strengthen the forces of “sentimentalism, ignorance and prejudice.”

And those were some of nicer letters. 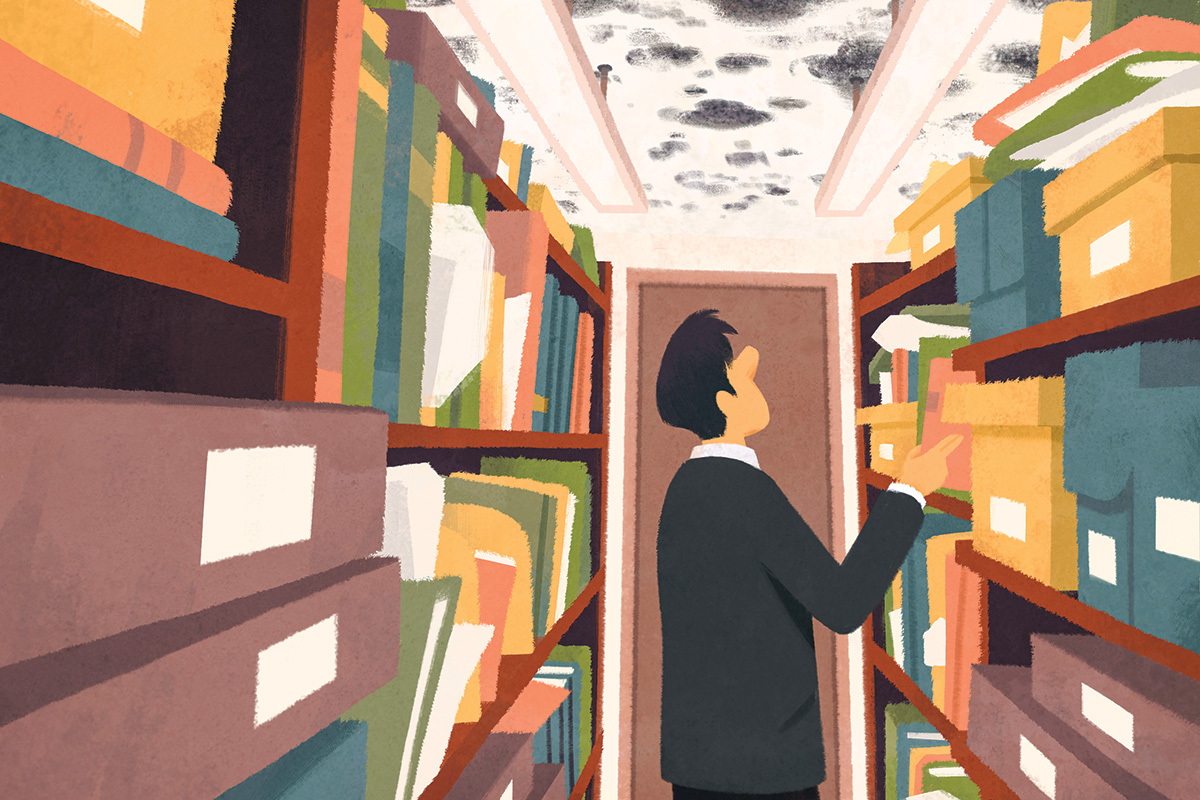 March is Women’s History Month, and the Rhode Island State Archives are commemorating the centennial of the nineteenth amendment to the U.S. Constitution with the record of Rhode Island’s contributions to the national conversation. Any citizen who cares to can go online and peruse the liver-spotted newspaper clippings bound in the Rhode Island Equal Suffrage Association scrapbook of 1887, or visit one of two public exhibitions at the State House and at the archives’ current location at 337 Westminster Street to learn about women’s struggle for political equality.

By May, however, the archives staff will be unpacking its collection of ten million letters, photographs and state documents dating back to 1638 at its third location in thirty years. The state possesses priceless historical gems like one of the original thirteen copies of the Declaration of Independence, complete with the iconic signature of John Hancock; the letters of state founder Roger Williams; and the colony’s renunciation of King George III. But it places little value in how those records are preserved and stored. Rhode Island is the only state in the nation without its own state library and historical records building. Since she took over the Secretary of State’s office in 2015, Nellie Gorbea has been on a mission to end the archives’ nomadic existence.

“If you look at Massachusetts and Connecticut, you see that they have a well-developed historic and cultural tourism economy,” Gorbea says. Our past deserves a better future.”

In 2016, the Rhode Island Foundation awarded the Secretary of State funds to hire a consultant to assess what would be needed to properly house the archives, possibly combining it with other repositories held by the Rhode Island Historical Society, the state Supreme Court and the city of Providence. In 2018, the state budgeted $150,000 for a study to identify a permanent home. Contractors DBVW Architects considered undeveloped land and existing buildings, before concluding that the best option was a new facility to be built on the empty lawn in front of the Department of Administration building on Smith Hill.

As envisioned, the $52 million, 52,000- square-foot Rhode Island Archives and History Center would feature “state-of-the-art light, climate and security controls,” 3,000 square feet of exhibition and meeting space and a preservation lab. Last year, Gorbea requested $5 million for engineering and architectural plans, but Governor Gina Raimondo only allocated $100,000 in her capital budget recommendation to develop an existing building. Gorbea asked for $150,000 for fiscal year 2020 and $5 million for fiscal year 2021, but received nothing in the Governor’s proposed budget.

Investing in state archives collections is often a hard sell, says Barbara Teague, executive director of the Council of State Archivists. A 2017, CoSA survey noted that annually, states only spend, on average, .007 percent of their total budgets on archives and records management.

“I don’t think legislators always realize that the archives are a central function of state and federal government’s accountability and transparency,” she says.

Why build repositories for old paper, they ask, when you can just scan it?

“But even if you did digitize it all, it’s not a simple solution,” she says. Scanning millions of pages is costly and there are preservation standards for digital materials to ensure they are preserved in formats that can be carried forward into ones that maybe haven’t been created yet.

Digital preservation is about access and does not always replace physical preservation, says C. Morgan Grefe, executive director of the Rhode Island Historical Society. For example, the letters of Roger Williams, on paper that bear his hand and 350-year-old ink, are historical artifacts in their own right that tell us more about that writer and that environment than just the words on the page.

“It’s about the materiality of history,” she says. And you can’t test a digital copy to understand environmental changes. “There’s a lot of history embedded in the physicality of documents.”

It took fifteen years of lobbying before Washington state legislators approved a plan in May to replace its 1962 archives facility — an underground concrete bunker — with a new $108-million building, says Washington State archivist Steve Excell. The facility had trees on the roof and water in the walls. There was one fire vault, but no fire sprinklers or room for more records. Archivists endured many nail-biters involving electrical shorts and floods.
“Man, oh man, it’s stressful knowing you have records at risk,” Excell says.

Rhode Island’s archives were once stored in the basement and the sub-basement of the State House. Some records were kept across the street in the basement of the Veterans Memorial Auditorium, where, on a Thursday afternoon in June 1989, an arsonist set four fires. The blaze ignited 1,000 boxes and much suspicion over the perpetrator’s motives. Whoever it was knew the basement’s layout, investigators said, and the casualties included expense vouchers from the state witness protection fund.

The mysterious arson was never solved. But it prompted the General Assembly to pass a law officially creating the state archives, under the purview of the Secretary of State. Then-Secretary of State Kathleen Connell promptly moved the records to Westminster Street, where at least there were some climate controls. But water became the new face of the enemy. The building occupies a floodplain, and basement sump-pumps continually beat back the river, which gurgles though a hole in the floor.

What was considered a vast improvement when the state signed the first five-year lease looks shabby today. The public space is outfitted with mismatched chairs and is too small to host events. The historical all-stars are in a climate-controlled space, but more than half of the collection is not. In May, Gorbea released a report estimating that more than a third of the documents were at high risk for damage.

“The danger is water and temperature,” says State Archivist Ashley Selima. Many things are in open stacks and we can’t have it at the lower temperature we prefer.”

“As much I appreciate the archives, I also understand how much worse things have gotten in the last twenty years simply because there are so many more documents,” she says. “Nobody is unaware of smell. I look up at the ceiling vent and see the black around it.”

Maureen Taylor, who uses the archives for her business, the Photo Detective, and her website, oldpvd.com, agrees.

“I travel all over the country lecturing in state archives and it’s always kind of sad to come home to Rhode Island, because the state archives are so small,” she says. “But don’t underestimate the amount of history that’s here. If you are from Rhode Island, your family history is in that archive somewhere.”

The 1887 referendum lost by a wide margin and Rhode Island women did not get equal suffrage until 1920, when the nineteenth amendment was ratified here. More than 130 years later, some men from East Greenwich still dismiss women’s participation in politics — read: former Town Council Vice President Sean Todd’s tweet about the 2017 Women’s March: “Definitely a guy came up with the #womensmarch perfect way to get the wives outta the house.” But, in 2018, twenty-seven women were elected to the General Assembly. Two are from East Greenwich.

And that is just one fascinating history of us, told by the archives.