The Newport-based jewelry brand involves rings, earrings and necklaces made through electroforming. 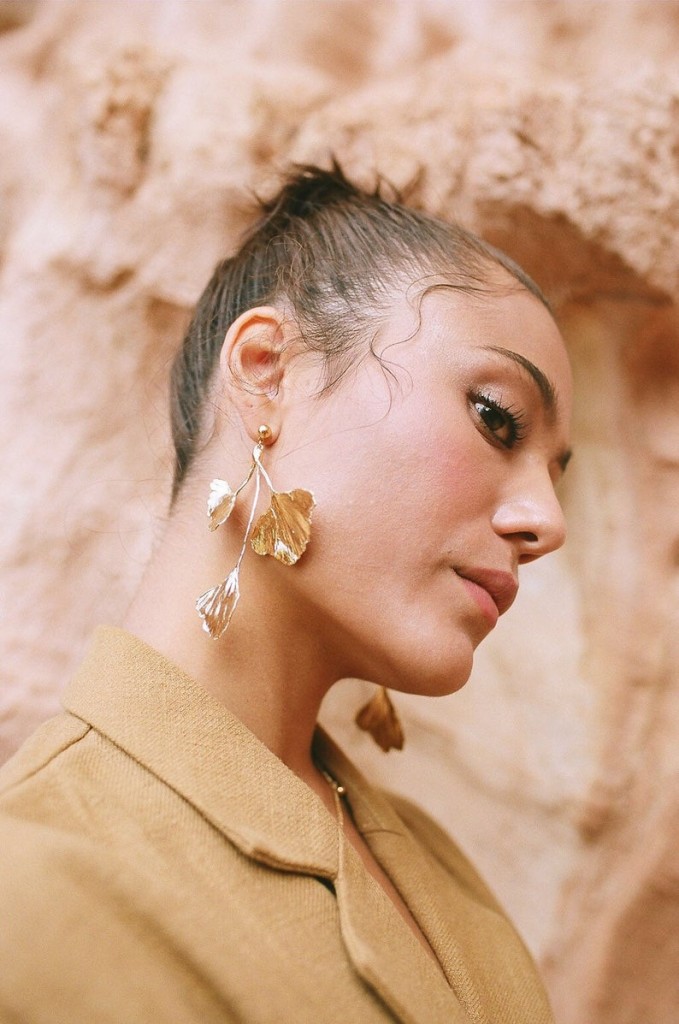 Lazuli Handcrafted is a Newport-based jewelry brand developed by artist Erika Young. She is a self-taught jewelry designer with a background in Geology. Her rings, earrings and necklaces are made through electroforming, a chemical process that gives pieces a natural, organic look. Last week, I had the chance to talk with Young about her creative process and journey.

Over the years, Young’s life has led her to Delaware, New Zealand, and back again to her home-state of Rhode Island, this time in Newport. She studied Geology, minored in French and worked on boats doing underwater mapping for a small, independent geophysical surveying contractor that sometimes worked with the EPA. When she was laid off in 2016, Young devoted herself to jewelry-making and it became her full-time gig.

“I never went to art school. I never went to business school,” Young says. “I’m learning this all as I go. Nothing teaches you like experience.” Her degree in science makes her a confident experimenter and she finds support in the Rhode Island jewelry community. “Coming into [jewelry] I got such a sense of validation and real community.”

In her previous job, she encountered the subtle sexism many women in the STEM field face. “Every time I was on a job, I always had in the back of my mind that someone was assuming I wasn’t qualified to be there,” she says. She welcomed the freedom of creative work and independent employment, although being completely self-reliant comes with its own stressors.

While jewelry was not the main part of her life until five years ago, Young was always a crafter. A true ’90s child, she fondly remembers making keychain lizards out of plastic pony beads and weaving hemp bracelets. She would sell her crafts at family yard sales and take custom orders for the holidays. Now, she’s electroforming amethyst crystals and gingko leaves. Her whimsical and playful butterfly collection is a nod to her ’90s childhood crafting days. “It’s the grown-up version of something my twelve year old self would have wanted.”

A self-taught jewelry designer, she uses electroforming to create her rings, earrings and necklaces. “This gives pieces a really cool, organic texture and it looks like you just dug it out of the ground,” she tells me as she pulls what she calls a “chandelier” of rings out from their blue, murky bath. To make her best-selling stacking rings, she glues the stone onto the band, paints part of the stone with conductive silver paint and then submerges it for a few days in a bright blue, electrically-charged acid, copper sulfate and water bath. Slowly, copper grows around the paint, securing the stone to the band and creating her jewelry’s signature natural look.

She uses a similar process for her hugely popular ginkgo leaf collection. These earrings and necklace pendants feature charms cast from ginkgo leaves that she plucked from a tree in downtown Newport.

The first few batches were each made with individual leaves, each piece cast from a hand-picked leaf. However, as her business grew, and this process became too time-consuming, a jewelry-making friend encouraged Young to have a local caster make a mold of her perfect gingko leaf.

Now, she takes the cast and plated leaves and welds a gold-filled ear wire extension onto the leaf’s stem. “I wanted people to thread the leaf stem through their ear,” she says.

No stranger to switching gears, Young had to make some big changes during the onset of the COVID-19 pandemic. She moved out of her studio in Newport and canceled all in-person shows, which made up 40 percent of her sales. She misses seeing people try on her rings and noticing which people gravitate to which stones. She had been looking forward to returning to Newport Folk Fest for the second year in a row, but couldn’t when it was canceled. “I was so ready to do that again, but even better,” she says with a sigh. Online sales increased, however, and Young is building her own website to transition off of Etsy. Eventually, she would like to open another showroom and studio in downtown Newport.

Currently, she’s working on a new collection in collaboration with her former studio mate, printmaker Catherine Druken, known as Lovici. Young is working with pearls and hopes to have more floral influences in her upcoming collections as well. She finds inspiration in natural color palates and in Rhode Island’s rugged beauty. For now, Erika’s jewelry can be found on etsy.com.

Check Out These New Books with Rhode Island Connections