These Rhode Islanders Got Creative Amid COVID-19

As the world around us grew quiet, local teachers, chefs, activists and farmers jumped into action.

Heather Dupee wasn’t sure she could do it. Three years after opening her kids’ cooking school at Warren’s Hope and Main, the former event planner was entirely at ease teaching elementary school children how to make recipes like mac and cheese. But in mid-March, as Governor Gina Raimondo progressively shuttered the public square to contain the novel coronavirus, in-person classes were out.

Dupee thought about putting her Made by Me Cooking School classes online, and that thought made her nervous. She wasn’t sure she could keep the connection with her students — or her composure. But, Dupee figured, the kids are stuck at home and everybody’s got to eat.

“I am not tech-savvy at all. The first time was like, ‘Oh my goodness, this is actually happening.’ ”

Dupee tied on her apron, propped up her cell phone and hit the “live” button on her business’s Facebook page. 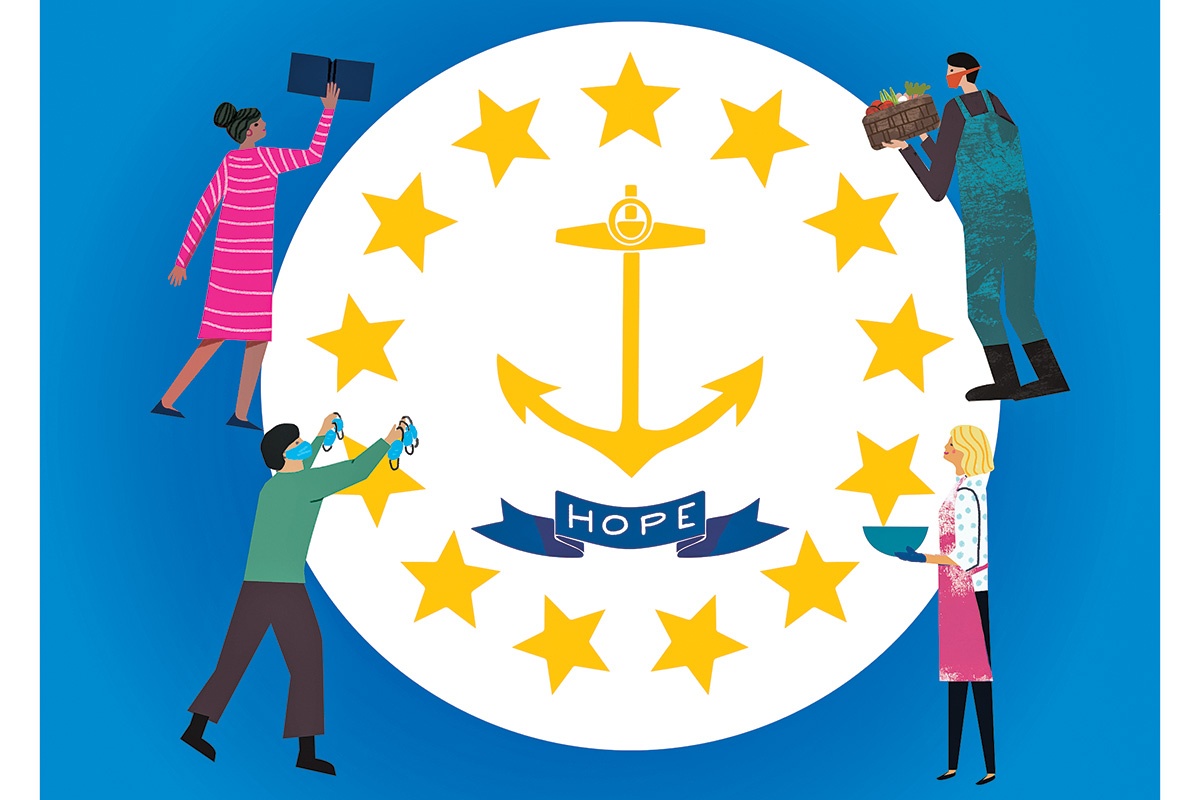 Most years, March is an indeterminant month. The gardener’s hand starts itching for the feel of a trowel, the winter coat becomes an unbearable burden and the debate over when to switch out the clothes closets begins. The lucky make their pilgrimages to warmer climes, the rest of us merely hope.

This March was the month we got creative. Everything one might imagine — yoga, concerts, college courses — moved to the Internet, along with things one might not: cocktail parties, pub trivia competitions. The community of helpers, from large, established foundations to previously non-existent community-based groups, went into overdrive. The hospitality industry, which represents the opposite of social distancing, found other ways to dispense its comforts. And teachers, those pedagogical MacGyvers, put their imaginations to work.

This March showcased the best of us.

Rhode Island Foundation President Neil D. Steinberg picked up the phone and started dialing. One of the nation’s oldest community foundations, it had long been a nexus for private resources and unmet needs. It wasn’t hard to see that the state’s nonprofits were going to be crushed by the demand at a time when they would be unable to hold the charity galas and golf tournaments that provide no small portion of their revenues. Within days, the foundation partnered with United Way of Rhode Island and raised $4 million.

In seven weeks, donors pledged $8.3 million, and the foundation had set up separate funds for grant relief to nonprofits providing food, housing and health care, to assist Rhode Islanders with mental health challenges, and to compensate artists for income lost in the crisis. And Steinberg expects the pot to grow.

“We needed to show leadership, so we went out and started,” Steinberg says. “Overall, I’m inspired by how people have stepped up and rallied.”

The state’s homeless shelters had to expand their services from overnight hours to twenty-four/seven operations with fewer staff due to illness or child care responsibilities. Case management became virtual, shelter beds had to be moved to physically separate clients. The hunt for motel rooms and supplies — toilet paper, food, thermometers — was relentless.

“People are being very creative,” says Rhode Island Coalition for the Homeless Executive Director Caitlin Frumerie. “We were getting ready to display a public art project of pillowcase flags representing the number of people experiencing homelessness on any given night, and we had been collecting pillowcases, but we are going to use them for masks, because that is more important right now.”

In Providence, Remi Graber, a Massachusetts paramedic and longtime activist, started matching donations and services with people looking for help through a COVID-19 PVD Area Mutual Aid and Community Assistance Facebook group.
“It’s meant to empower your community to help yourselves,” he says, “and not hope to rely on the government or a large nonprofit entity that may or may not help.”

Down in South Kingstown, school committee vice chair Sarah Markey was part of a group that launched a similar effort. It started with a simple form assessing the town’s needs and who was willing to donate money, supplies and their time. The South County Mutual Aid Support Group spread by word of mouth. Within a month, it snagged a $25,000 Rhode Island Foundation grant. Nearly 200 volunteers helped seventy-six neighbors with groceries, Easter basket goodies, laundry and rent assistance.

“Our neighbors have been really generous,” Markey says. “But it’s going out the door as fast as it’s coming in.”

Michael Norton, a Harvard Business School professor who studies the emotional impacts of giving, isn’t surprised. His research shows that the average person is quite generous, and givers are happiest when their gifts are local and personal.
The pandemic has afforded people myriad opportunities to act on that inclination.

“Neighborhoods that didn’t think of themselves as neighborhoods in the traditional sense are becoming neighborhoods. And once you’ve created a community, that will be a lasting change,” he says. “After the crisis is gone, the community will still be there.”

March normally finds the grande dame of Watch Hill readying herself for another season of five-star dining and service to well-heeled vacationers. Instead, the Ocean House staff took advantage of the lull to hold a wine education class for the staff. Easter dinners and Mother’s Day lunches were to-go, and president Daniel Hostettler deployed his staff to prepare box lunches for schoolchildren who normally receive free and reduced-price lunches at school. Its catering food truck was rerouted to the Westerly ice rink, where three times a week it dispensed lunches featuring items such as pumpkin soup and shepherd’s pie and other donated foods from partners such as Del’s, Richmond Farms Fresh Market and Dave’s Coffee.
“It’s a challenging time,” says spokesperson Laurie Hobbs. “We all have to remind ourselves about how we carry on and build for the future.”

Cumberland’s Gotta Q did the same, serving free lunches to children and adults in need. Owner Michael Strout steered his Texas barbecue business back to its roots as a quick-serve operation, and customers responded in force.

“We have a large social media presence, and our customer base has been quite appreciative,” says Strout. “They are tipping the staff at a wonderful rate, and people have been supporting the restaurant by buying gift cards.”

Farm Fresh RI, which has acted as a middleman between farmers and large wholesale buyers since 2009, went retail. For a minimum order of $60, shoppers could order fresh local farm products through the Market Mobile program for pickup or delivery. Within two weeks, they had so many customers, they had to hire more staff.

“When we heard we were going to lose a lot of institutional sales, it became clear that there was no other way forward for farmers to find a place to sell those bulk items,” says sales manager Nikki Ayres. “Our trucks have never been this busy, and everybody’s so grateful — especially the farmers to have this outlet to sell food that would otherwise go to waste.”

Providence’s Wilbury Theatre was playing Miss You Like Hell when the virus closed the new musical, mid-run. But artistic director Josh Short and general manager Max Ponticelli had a pile of small-scale original works they had planned to present in April. With some socially distant blocking and the right setup, why not stream? They spent a week figuring out the technology, then began rolling out classes and performances. Live theater runs on a current between the actors and the audience, “but we have such a talented group, they are able to dig into that emotional reservoir and bring out that magic,” Ponticelli says. “Because it’s so novel and exciting, the energy is still there — even without the audience.”

“We’ve gotten so many emails,” adds Short. “People are pretty bored at home, so they were thrilled.”

Matthew Lawrence lost his side gig putting out his Law and Order Party newsletter of arts and culture events. “Not a single event was happening anywhere,” he says. He decided to create his own event, hosting virtual cocktail parties with two rules: “No talking about the virus and no talking about the election,” he says. “About a dozen people show up. It’s gone pretty well.”

Teachers had ten days to rewrite their lesson plans and atomize a single physical classroom into many individual online classrooms. North Kingstown’s Hamilton Elementary School special education teacher Tara Apperson was crash-coursing it through web interfaces she had no idea existed, filming metamorphizing caterpillars and bean germination, and setting up individual conferences with each student.

“I think it’s a total miracle that everyone was able to drop everything and put it back out there in ten days,” she says. “I am walking this fine line of emotional distress and total joy and excitement.”

Amy Almada, a fifth-grade social studies and English language arts teacher at East Providence’s Emma Whiteknact Elementary School, delighted her students with the occasional appearance by her cat Zoe and taught a lesson on primary sources by assigning her students a video or written diary of their pandemic experiences. She began to share her tips with other teachers via short how-to videos on YouTube. After two weeks, her first effort had more than half a million views and she had 4,630 subscribers.

“It’s crazy how popular that first video is! It has been shared around the world. I have teachers reaching out to me for help from different states and countries,” she says. “Zoe hasn’t made an appearance in them yet.”

Christine Letts, a retired Harvard Kennedy School of Government philanthropy professor, says the pandemic has barely budged most philanthropic institutions out of their rigid formulas of releasing no more than 5 percent of their principal each year. As for the rest of us:
“The virus has been the lesson in how we are able to connect better,” she says, and may shift our emphasis away from wealth and finance to what’s really valuable in our society — “the barista or the grocery store checker who’s known your name for ten years. We actually care about that person; it’s just so obvious now. Those are the people who always get hurt [in a financial crisis]. This time, it’s so abrupt and in your face. Maybe it will help us.”

Dupee’s production was as homemade as her turkey enchiladas. The camera stays put, so the action at the stove remains out of view. She teaches in a narrow vertical window of her phone screen, with sous chefs eleven-year-old Brady and eight-year-old Hunter jockeying for cameos at the edges of the frame. There’s no editing; once she had to pick an entire jar of peppercorns out of her pizza sauce. The phone fell and cut off the live feed. Another time she appeared sideways. These hiccups only endear the Dupees to their fans.

“I get emails saying ‘I love your kids’ and ‘You guys are a bright light.’ This is not how I envisioned it — inviting all of these people into our family,” she says. “But this is real life.”