Our guide will get you hooked on the whole wide world of veg.

Plant-based is all the rage, and Rhode Island is front and center on the craze.

From the best places to dine and bakeries that produce cruelty-free treats to fellow vegans to follow and cooking classes to take, our guide will get you hooked on the whole wide world of veg.

By Jamie Coelho and Julie Tremaine • Photography by Angel Tucker

Plant City
Four vegan restaurants and a food market under one roof cover every non-plant-based craving with its veggie equivalent: If we could eat this way every day, we would. Go for Mexican at Bar Verde where the heaping butternut queso-topped nachos, hearty cauliflower tacos and a roasted mushroom quesadilla one up meaty counterparts, or choose Italian at Double Zero, where vegetable-and-cashew-cheese-topped pizzas, decadent Italian bolognese and meatless meatballs will satisfy the fiercest carnivores. Order sandwiches, bowls and salads at Make Out or settle in for a housemade veggie burger at New Burger. You won’t miss the meat after experiencing these feasts. 334 South Water St., Providence, 429-2029, matthewkenneycuisine.com/plant-city-pvd

Julians and Pizza J
Julians was one of the first on the scene to begin catering cuisine to vegans more than a decade ago with vegan brunch options like French toast with pomegranate and pear jam, toasted coconut and vegan blueberry whipped cream, granola pumpkin-spiced pancakes and vegan Benedict with fried tofu. Pizza J followed suit with a whole restaurant dedicated to pies. They will substitute a gluten-free crust for any pizza, and guests can also ask for the free vegan cheese substitution. Our personal favorite, the Tony Clifton, involves housemade vegan ricotta, roasted potatoes and red peppers, garlic, onion and olive oil. Julians, 318 Broadway, Providence, 861-1770, juliansprovidence.com; Pizza J, 967 Westminster St., Providence, 632-0555, pizzajprovidence.com

Veggie Fun
Vegans get the short end of the stick at most Chinese restaurants, where steamed vegetables and plain rice are often the only options that are truly vegan (beware of sneaky fish sauce in stir-fry!). Veggie Fun is a Chinese restaurant where traditional favorites are all made plant-based. General Tso’s chicken fans can try the seitan version with soy protein fried in a spicy sauce. Spring and summer rolls come in a sampler of soft and crunchy rolled vegetable-stuffed bites, and the Malaysian curry stew doesn’t mess around with broccoli, carrots, potatoes and seitan in a spicy yellow curry sauce served with brown rice. 123 Dorrance St., Providence, 270-4700, veggiefunri.com 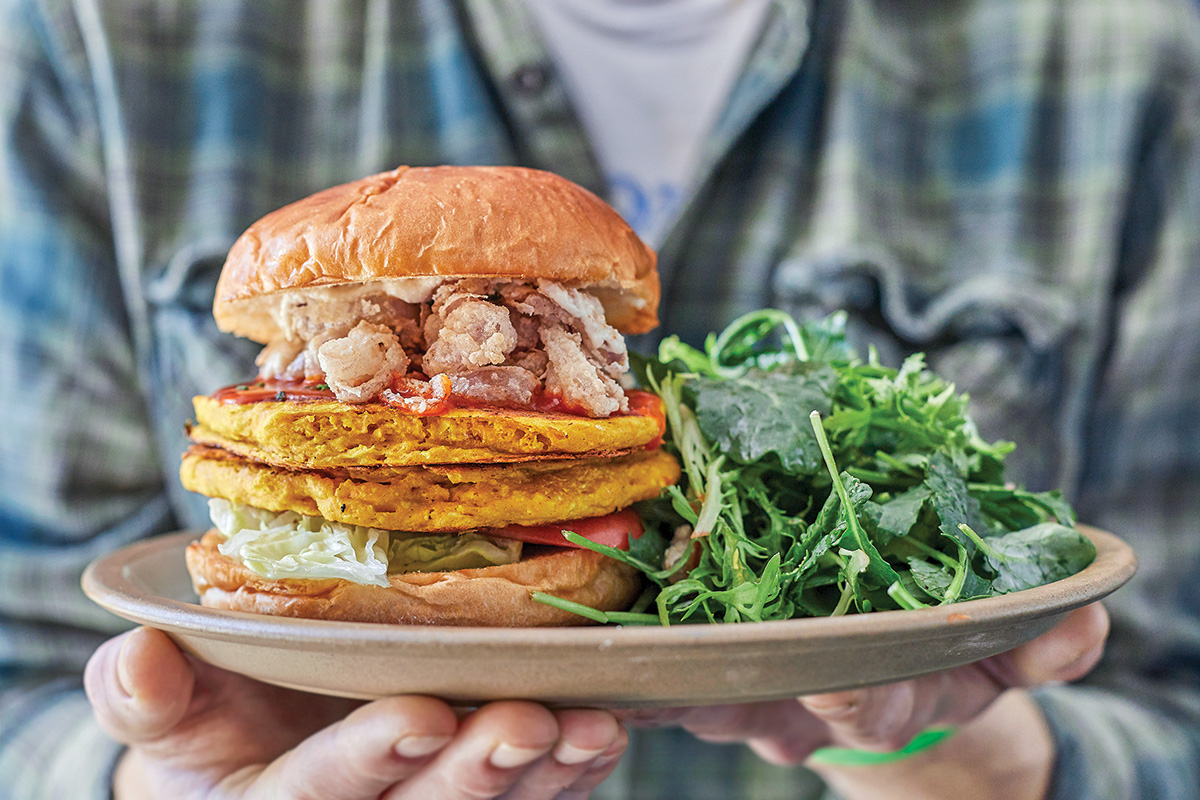 Rhody Roots
Rhody Roots is downtown Warren’s latest food haven that specializes in locally sourced, allergen-conscious cuisine for lunch, dinner and daily brunch (closed Tuesdays). The menu is marked with all dishes that can be made vegan or gluten-free on request, plus they offer a steady takeout business. Top choices include the beet tartare served with citrus gastrique and candied walnuts, crispy brussels sprouts topped with crunchy noodles and the monstrous meatless buffalo sandwich piled with two chickpea and cauliflower patties on a vegan bun. There’s even a Bolognese made with Warren-neighbor Prica Farina pasta modified with a rich mushroom gravy. 511 Main St., Warren, 903-9159, rhodyroots.com 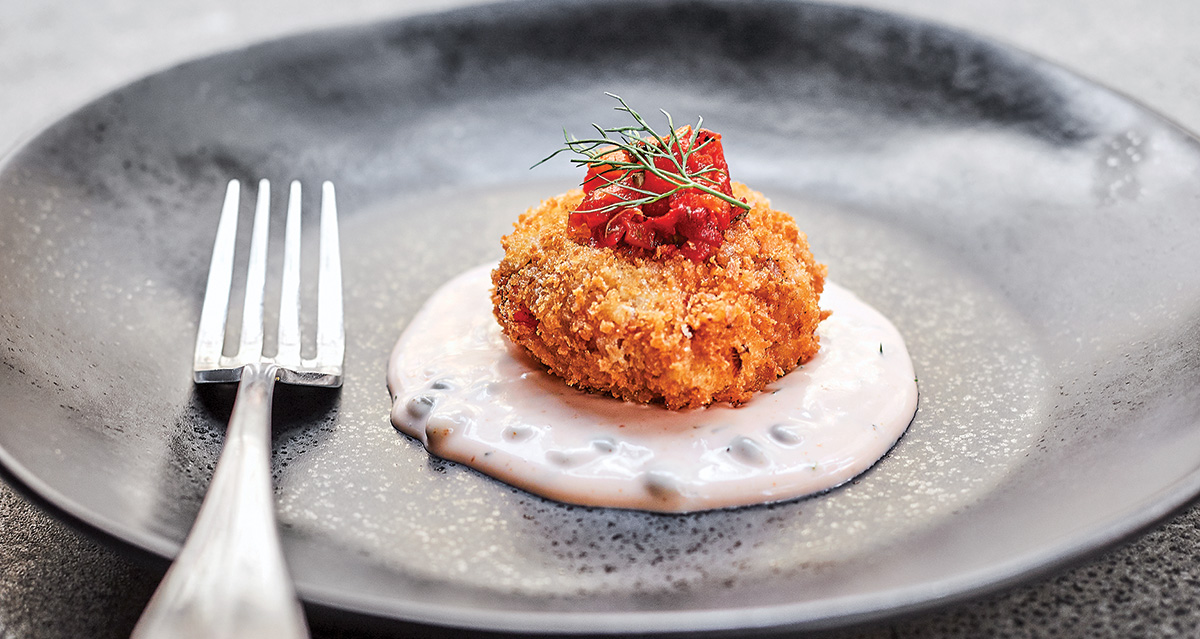 The Twelve Plants’ seasonal tasting menu includes the crab cake made from hearts of palm. Photography by Angel Tucker.

Twelve Plants Vegan Popup
Providence has dozens of high-end restaurant options but few offer a completely vegan multi-course tasting menu. Home cook and personal injury lawyer-turned-self-trained chef, Peter Carvelli, wanted to share his celebratory plant-based feasts with the public, so he worked his way into downtown Providence’s incubator kitchen, Vinya Test Kitchen. On select Monday nights, Carvelli can be found in the open galley serving up some of his favorite vegan dishes, including pasta stuffed with cashew ricotta, roasted carrots with carrot puree and carrot salsa verde, beet salad with cashew crema and orange vinaigrette and butternut squash roast with spinach and mushroom gravy. Look for his next popup on Instagram at @twelve.plants. instagram.com/twelve.plants, 500-5189, twelveplants.co

Eli’s Kitchen
Clearly marked vegan and gluten-free menu items are highlighted on the menu, including Eli’s famous crisp and sweet chili cauliflower with fried garlic and the terrific naan with coconut, cilantro, garlic and mango chutney. For entrees, the tofu yellow Thai curry is tops, or go all out with Pam’s dinner, a vegan and gluten-free customized meal based on your dietary restrictions. It’s named after chef Eli Dunn’s wife, a former vegan, so you know it’s going to be good. 40 Market St., Warren, 245-1809, eliskitchenwarren.com

Like No Udder
The owners of the world’s first all-vegan soft-serve ice cream truck opened the area’s only all-vegan ice cream shop. Like No Udder still takes the truck around, but ice cream devotees can get a steady fix of the good stuff at the stationary shop. The storefront not only sells Like No Udder’s famous soy-based soft-serve, but it also boasts more than a dozen flavors of hard-packed ice cream, free of all animal products, including dairy, eggs, animal fats and honey. They’re scooping more than just plain vanilla; we love the Thai iced tea and coconut mango. 170 Ives St., Providence, 228-3880, like-no-udder.com; @LikeNoUdder 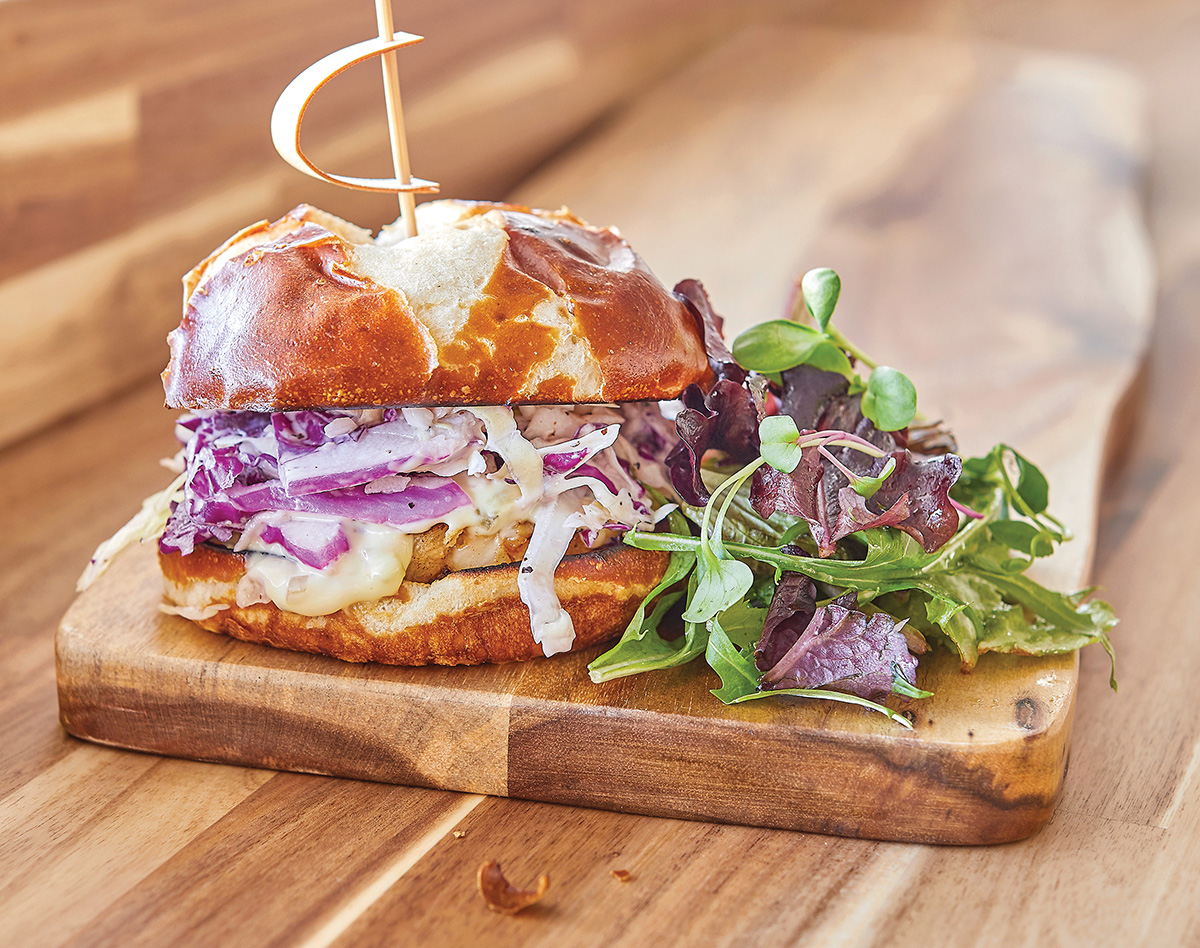 The hefty Krabby Cake sandwich from Middletown’s Sprout and Lentil is made with hearts of palm, green onion, celery, panko and spices. Photography by Angel Tucker.

Sprout and Lentil
Former yacht chef Carmen Foy traveled the world with high-end clients and Olympic sailors then became certified in plant-based nutrition. She recently opened this Aquidneck Island vegan kitchen that does it all. Have a sit-down vegan lunch (grab one of four stools at the window seat) of scratch-made soups, sandwiches and burgers — try the Krabby Cakes made with hearts of palm, green onion, celery, panko and spices — grab takeout or take healthy prepared meals home. Sprout and Lentil also provides vegan and plant-based food at farmers markets and events, and can be hired for catering, private and group instruction. Take a vegan cooking lesson on site, or shop for a few vegan products all in one place. 796 Aquidneck Ave., Unit 3, Middletown, 426-0500, sproutandlentil.com

Bayberry Beer Hall
This community beer hall has an inclusive menu with something for every dietary need, including gluten-free, plant-based and meat-eaters. For vegans, some dishes are 100-percent vegetable-based, or can be made so with slight exclusions or substitutions. Veggie-worshippers should opt for the chickpea panisse with Moonstone oyster mushrooms, roasted root vegetables and sauce vert or the smoked beet reuben (skip the gruyere). The nime chow salad with rice noodles and toasted peanuts and kale Caesar salad with cashew dressing are also veg-friendly. 381 West Fountain St., Providence, 383-9487, bayberrybeerhall.com

The Grange and Garden Grille
The Grange picked up what the Garden Grille started and ran with it. The world is your menu at both places, owned by longtime vegan Rob Yaffe. Servers explain how almost every item can be geared to vegan diets, but vegetarians who eat cheese and eggs are welcomed, too. Starting with coffee served with creamy oat milk, every detail is double-checked. We love the Grange’s roasted and fried cauliflower with sweet chili sauce; it’s big enough to sub for lunch. For an indulgent meal without the guilt, go for the mushroom po’ boy at the Grange and the famous butternut squash quesadilla at Garden Grille. Craving your five-a-day all in one bowl? Veer toward the salads, including the Grange’s quinoa salad with lettuce, avocado, beets, sweet potatoes, sunflowers seeds and a roasted garlic dressing or Reggie’s Raw Heaven at Garden Grille. Don’t forget vegan dessert at Wildflour Bakery, located right next door to Garden Grille. The Grange, 166 Broadway, Providence, 831-0600, providencegrange.com; Garden Grille, 727 East Ave., Pawtucket, 726-2826, gardengrilleri.com 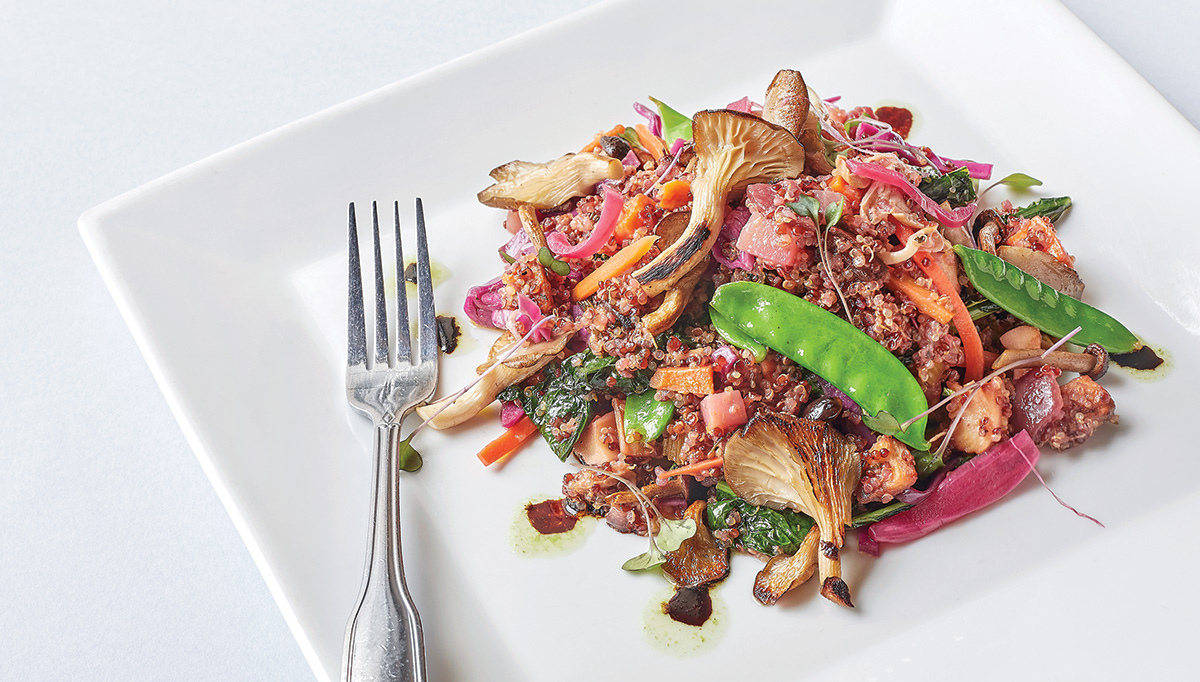 The Rhody mushrooms with beet quinoa at Celestial Cafe. Photography by Angel Tucker.

Celestial Cafe
Celestial Cafe is South County’s hotspot for plant-based devotees. They have a vast vegan and gluten-free following, and almost any menu item can be modified to meatless upon request. Some of the top veg dishes include Rhody mushrooms with beet quinoa and Vietnamese noodles, and there’s always some kind of seasonal special to mix it up using what’s locally available from area farms. Chef Brandon Read also works with local growers and merchants to put together monthly five-course farm dinners that can be adapted for plant-based eaters. 567 S. County Trl., Exeter, 295-5559, celestialcaferi.com

AS220 Food and Drink
AS220 was one of the original vegan (and non-vegan) hotspots in Providence, and it just dropped a new menu after undergoing renovations to the cafe and bar. Now there’s a vegan option for every menu item, so preferences don’t have to sacrifice flavor. Go for mac and cheese with vegan cheese and fried cauliflower, mole enchiladas with black beans, mushrooms and poblanos, a buffalo seitan sandwich and so much more. 115 Empire St., Providence, 831-3663, as220.org/foodanddrink

Blackie’s
Blackie’s appeals to all eaters, whether it’s carnivores after a juicy burger or steak, indulgent omnivores, people with food allergies and plant-based eaters who are looking for indulgent feasts. Blackie’s sources ingredients locally and creates each meal to personalized preferences. Plant-based eaters will enjoy the vegan nachos with smoked jackfruit, vegan nacho cheese, jalapenos, guac, salsa verde and dairy-free sour cream. There are vegan jackfruit burgers and cauliflower parm topped with dairy-free cheese. There’s also a “b. your own person” menu where guests can completely customize their meals by choosing one protein and two sides, including selections like pulled jackfruit, butternut squash aglio olio, oven-roasted eggplant, heirloom carrot salad and much more. 280 George Washington Hwy., Smithfield, 231-4777, eatatblackies.com

Tori Tomo
While this ramen place may be known for its intense chicken-based paitan broth, it also offers many ramen options for vegans. Plant-based diets should ask for the vegetable miso, sweet and sour kimchee or tomato ramen (just hold the egg). The steaming, flavorful soup comes stocked with tofu, organic mushrooms, corn and broccoli and the same ramen noodles as the regular dishes, no sorry substitutes (and no hazy flashbacks to those ramen-filled college days). The Yasai Don rice bowl also stirs up broccoli, spinach, mushrooms and bean sprouts with tofu and sweet soy sauce. 69 Washington St., Providence, 409-2077, toritomopvd.com