Is This Newport’s Most Magical Property?

The gardens at Bellevue House in Newport reveal the life story of their owner, Ronald Lee Fleming. 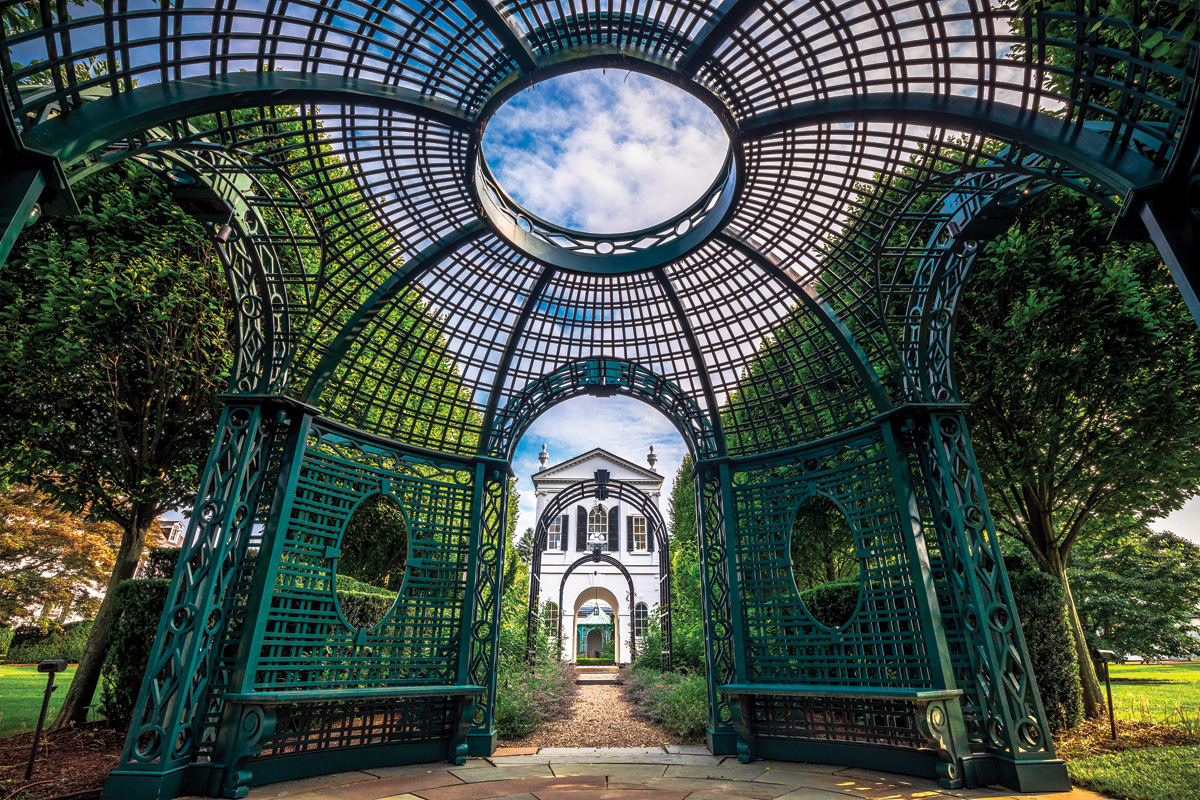 Looking north, this gazebo in the property’s center frames a view of the two-story McIntire Tea House (or Derby Summer House). Built in 1926 by Fiske Kimball, the tea house is a copy of the eighteenth-century eponymous folly that Samuel McIntire designed for famed millionaire merchant Elias Hasket Derby of Salem, Mass. Coincidentally, Martha Codman, for whom Ogden Codman Jr. designed Bellevue House, was Derby’s great-great-granddaughter. Photography by Wolf Matthewson

Historical Context
“I’m not as much of a plantsman as I should be,” confesses Ronald Lee Fleming. Fleming is the owner of Newport’s Bellevue House, and regardless of this self-perceived weakness, one thing is certain: What he lacks in plant knowledge, he compensates for with other expertise.

Since purchasing the three-and-a-half-acre estate in 1999, Fleming — a lauded urban planner, placemaker and historic preservationist — has applied his talents and resources toward revitalizing the house and its grounds.

Bellevue, a Colonial Revival mansion, was designed by architect Ogden Codman Jr. in 1910 for his cousin, Martha Codman. French garden designer Achille Duchêne designed the property’s original formal gardens, but by the time Fleming arrived, the gardens — like the house itself — required attention. “There were gardens that were there originally that had been plowed up,” he says, and the existing gardens “were not in any shape at all.” The back of the property has also been subdivided into five lots. “I got it back into one property again and began to think about how it could tell the story of our family and our life.” 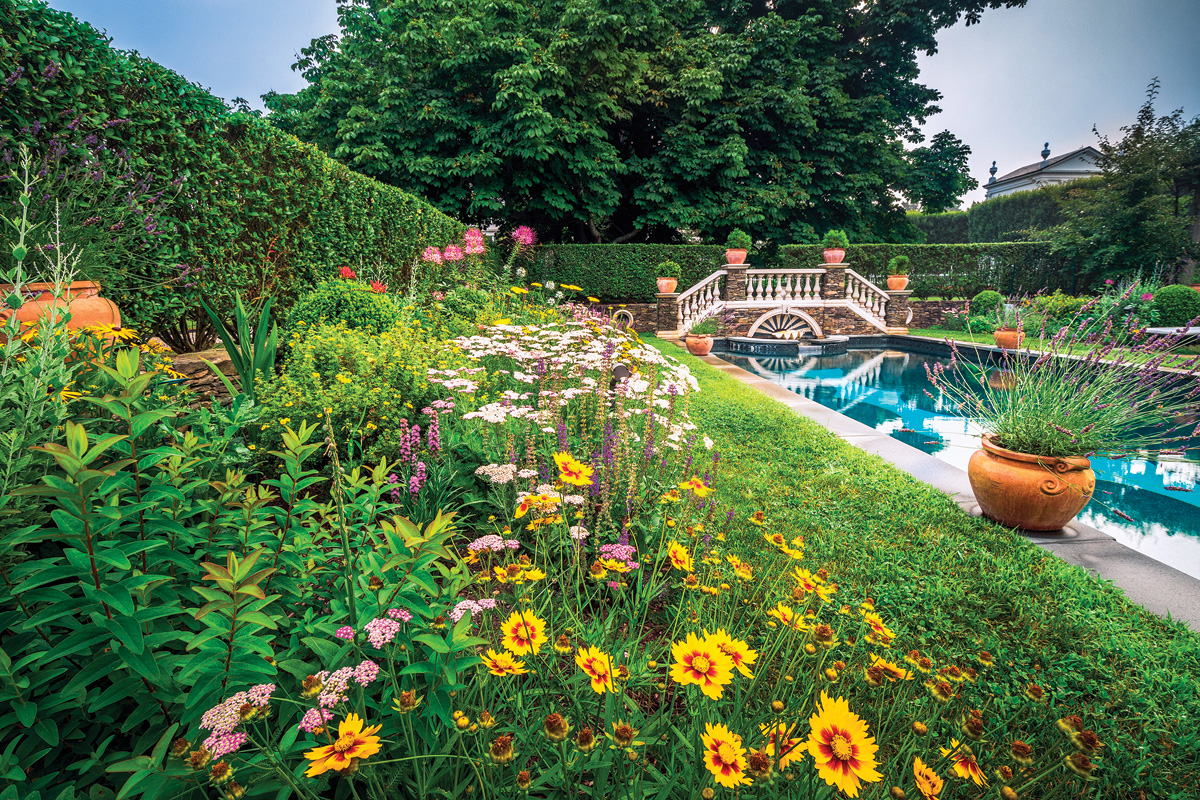 The Sapphire Pool and the Arts and Crafts Garden. When designing these gardens, Fleming was heavily influenced by the work of Edith Wharton — a friend of the home’s architect who authored a book on Italian villas — and designers Edwin Lutyens, Harold Peto and Cecil Pinsent. “They are my heroes [and] are much a repertoire of the garden,” Fleming says. Photography by Wolf Matthewson

Family Story
“Having a narrative garden was very much a part of my thinking,” Fleming says, “telling a narrative story and then, more than that, relating it to my own personal experience.”

The Bellevue House is now home to about twelve gardens, Fleming says. “Each of them is named and tells the story of my life and my family and my own history.”

The American Renaissance Water Garden features a statue of Pomona, the Roman goddess of orchards, presiding over a Villa Lante-style table. In addition to Italy’s Villa Lante, Fleming says this particular garden references other gardens familiar to Ogden Codman: The screen behind Pomona is based on a Codman sketch of a garden in the Netherlands. The fountain, which can be manipulated by a button at the head of the table (a position held by a granite relief of Fleming himself) references the trick fountains of the Schloss Hellbrunn Palace outside Salzburg. “The metaphor here is the waters come out and they flow down the Fleming family table and they go out the head, down the rill and toward the children’s fountain,” he says. “You go from father to son and daughters then to the grandchildren and the grandchildren’s pool, which is the Sapphire Pool.”

“The idea of surprise is very much a part of my garden,” Fleming says. “You’ll bump into things, you’ll see new things, you have a series of experiences; everything is not revealed to you at once.” Photography by Wolf Matthewson

“In some ways, doing a garden is a kind of therapy,” says Fleming in that it allows you “to go into your soul, into the depths.” He has just written a book scheduled to publish in the fall that examines his experiences in Vietnam through the lens of his garden. The installation most personal to him on the property is a cascade called “Years of Living Dangerously.” The sculpture represents the six times that Fleming was almost killed. “You have two Volkswagens, a flag, a Jag and two skulls,” he says. “All represent things that have happened to me.” (Those near-death experiences include three car accidents, three strokes and two close encounters with the wrong end of a gun — once in the Congo and once in Vietnam.)

In contrast to this heavy subject matter, there is plenty of lightness as well, namely in the form of monkeys, of which there are roughly 100 scattered around the property. Why monkeys? “They are a commentary about us. They share our foibles and the childlike nature of us.” They’ve also proven valuable for another purpose: “They’re a very good device to entertain the children,” he says. 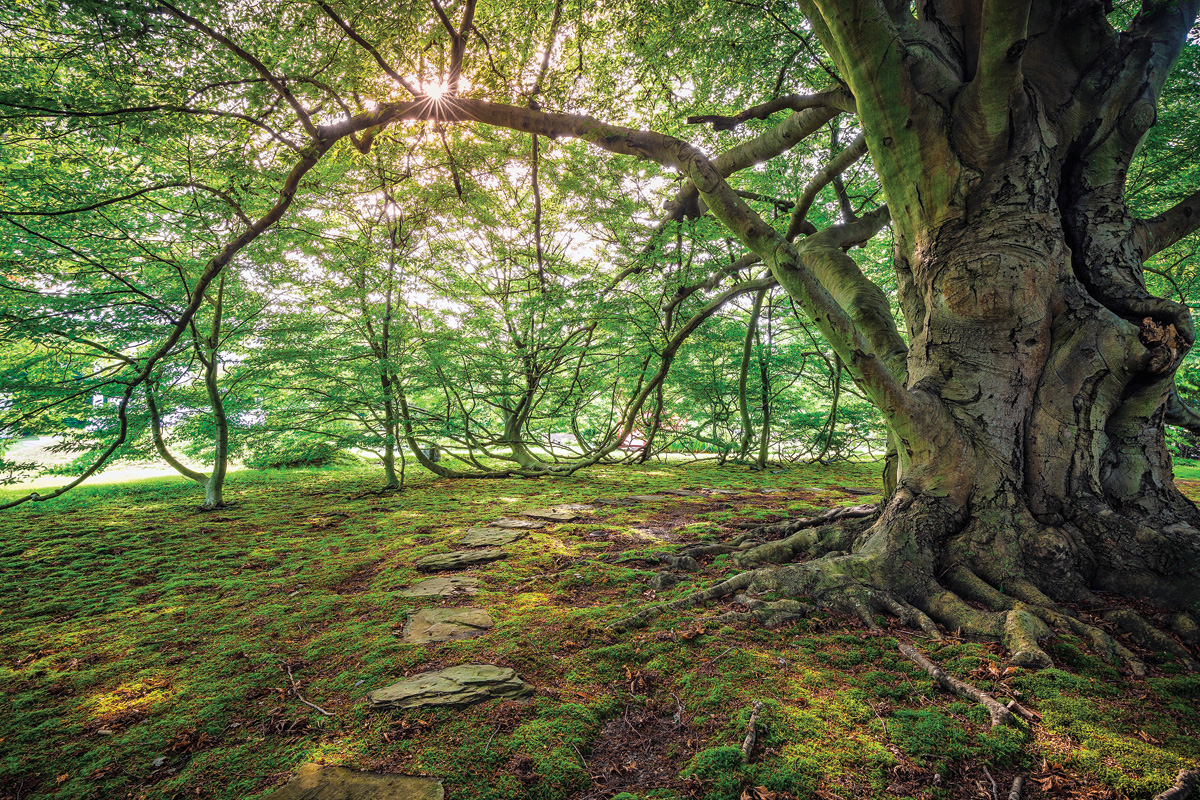 The draped branches of this majestic cutleaf beech create one of many magical spaces at Bellevue. Photography by Wolf Matthewson

Magical Spaces
Tucked below the library that holds Fleming’s vast collection of gardening books is a nymphaeum — a shrine to the creatures (some real, some mythical) whose beauty has inspired him over the years. However, there is an undeniable air of magic throughout the garden spaces at Bellevue, which may lead visitors to question if perhaps the nymphs are wont to move freely beyond their dedicated grotto. There is a white Secret Garden inspired by author Sarah Orne Jewett and a majestic cutleaf beech, the draped branches of which create a hidden natural room; at one time his daughters had reading chairs beneath it. “That tree was dying and we cut off the top and it started growing again,” Fleming explains of the beech. “There were six feet of brambles there. We cut all the brambles and moss started to grow. It’s very fragile. It’s one of my favorite places.” The scenery at Bellevue makes it a charming stage for dance companies, several of which have performed under that tree’s canopy. “The dancers twirl themselves out of that tree,” he says.

Fleming is aware of the gem he has crafted over the past twenty years, and he also truly wants to share it with the public. In light of that, Fleming is working to bequeath a portion of Bellevue’s gardens to the public. “I want to save the garden and let the public use it and have their own magic in it.”