Red House Design Build masterfully transforms this East Greenwich estate from the inside out. 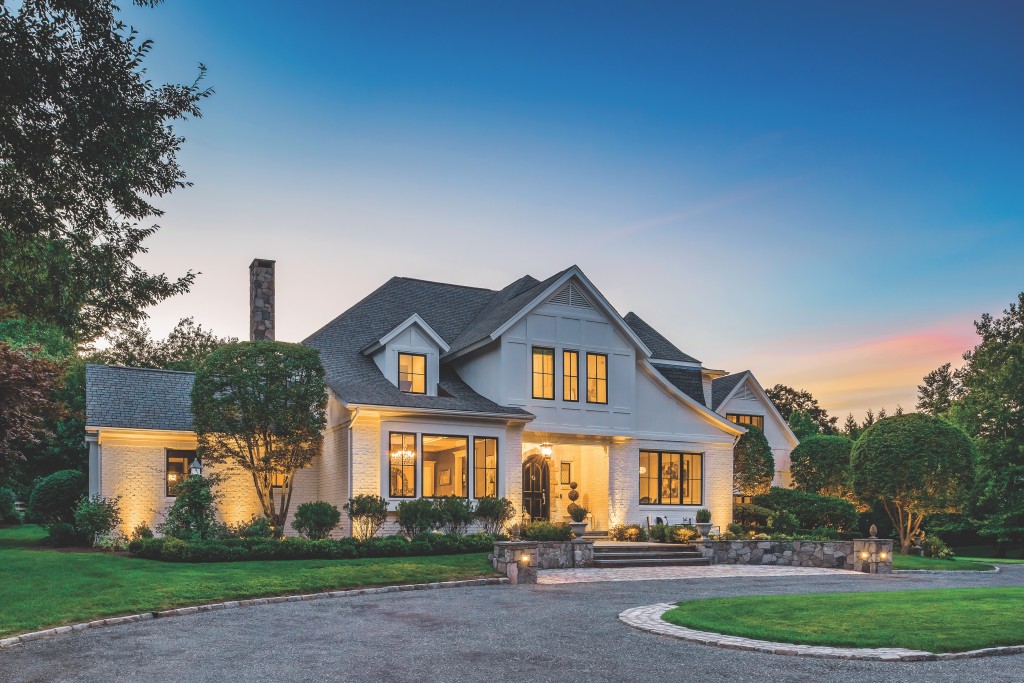 The property was chock full with untapped potential.

That’s what the Calores thought when they first stumbled upon this grand estate tucked away on a secluded East Greenwich street in 2018. The size and location were spot on, but the structure’s half-timbered Tudor-style didn’t quite suit the couple’s contemporary style while its interior layout didn’t quite complement their social nature.

“We knew we loved the house, but we also knew it needed some work,” says Michael Calore.

“It needed the Red House touch,” adds his wife, Aili. 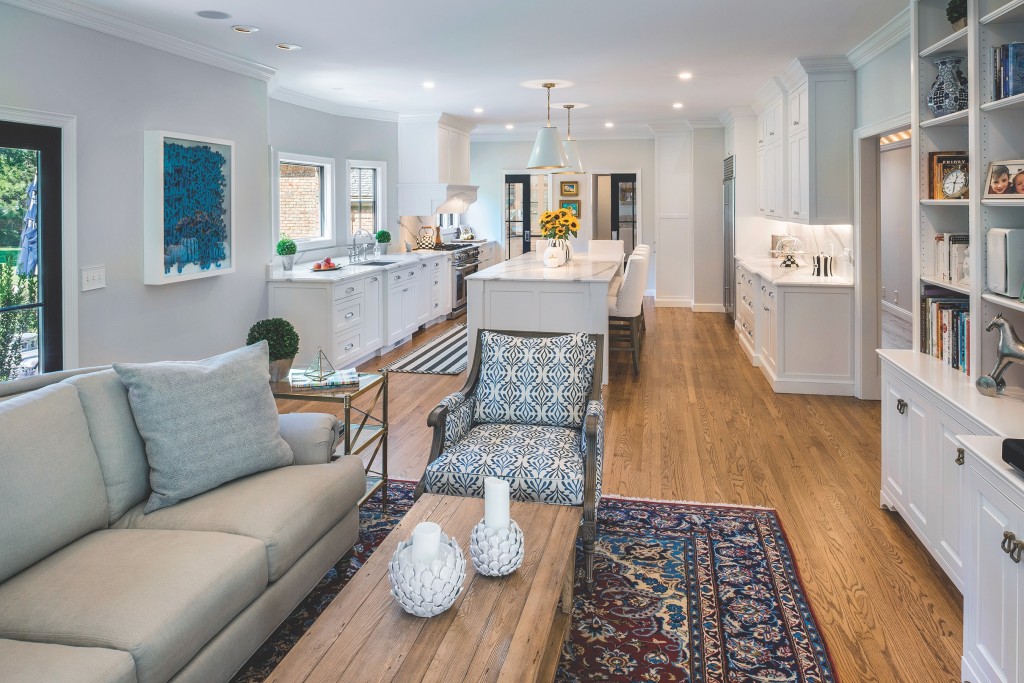 They first learned of Red House Design Build in 2012 when they witnessed the Providence-based company masterfully rejuvenate a nearby historic church-turned-private residence. Thus began a steady, long-standing partnership: the couple called on Red House to complete a number of projects in their former residence over the years, including redesigns of a master bathroom, entryway and powder room. Then, once they decided a move was in the cards, they naturally turned to Red House again.

“We actually brought [Red House’s general manager, Justin Zeller] with us during the walk-through to get a sense for what we could do,” says Calore. “It really helped us make the decision to buy the house.”

All involved in the renovation planning assumed the exterior work would come first, but after spending their first round of holidays in the new space at the end of 2018, updating and refining the layout became a priority for the self-proclaimed serial-holiday hosts. The original footprint of the open concept living area was long, narrow and cramped, making it less than ideal for entertaining guests. The surrounding walls were lined with too many doorways, both interior and exterior, and an awkward no man’s land separated the kitchen from the family area. It was the Bermuda Triangle of design. The kitchen’s dark cabinetry and fixtures also clashed with the couple’s bright and cheery vision. 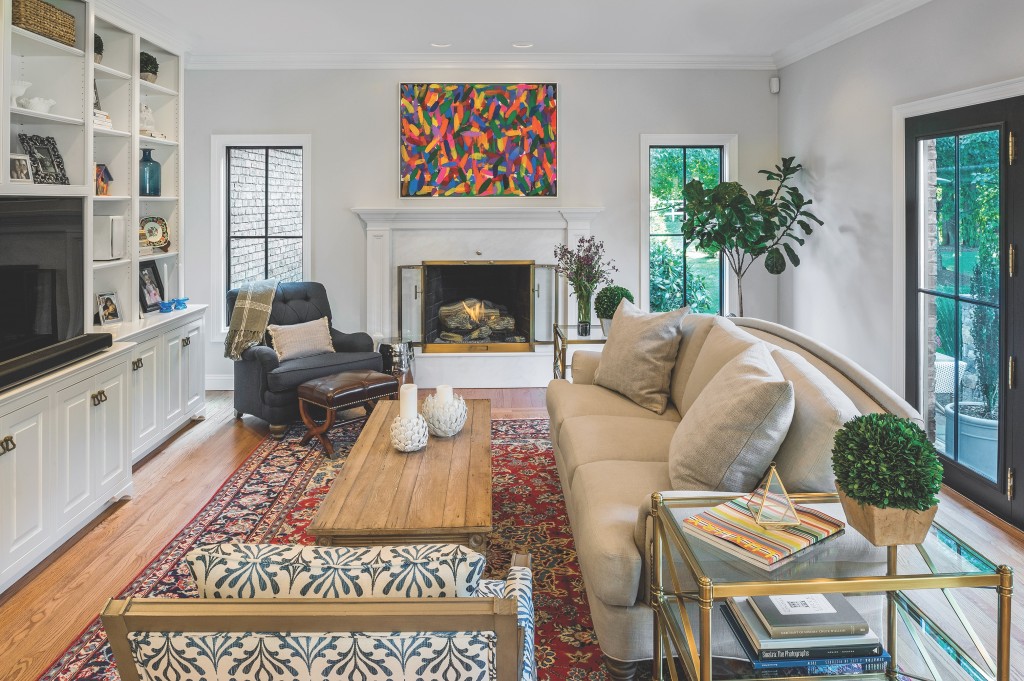 Keeping the couple’s lifestyle and aesthetic in mind, the Red House team went to work. First, they shifted the kitchen footprint and enlarged it. This made room for an extended mudroom space and a new walk-in pantry outfitted with heavy-duty-yet-sleek Fireslate countertops, a wine cooler and plenty of storage. Just beyond the pantry’s glass sliding pocket doors, the kitchen now features a large, state-of- the-art Capital gas range and custom hood, while an undermount sink and a picture window flanked by two casement windows take the place of an unnecessary set of French doors. An abundance of custom inset white cabinetry and white quartz countertop line the kitchen perimeter and encircle a striking eleven-foot island. This focal fixture provides an optimal prep area for the homeowner’s baking affinity along with plenty of seating for guests to comfortably gather. To keep up to code and ensure a clean, uninterrupted design, Red House incorporated handy pop-up outlets on the exterior wall under the windows. 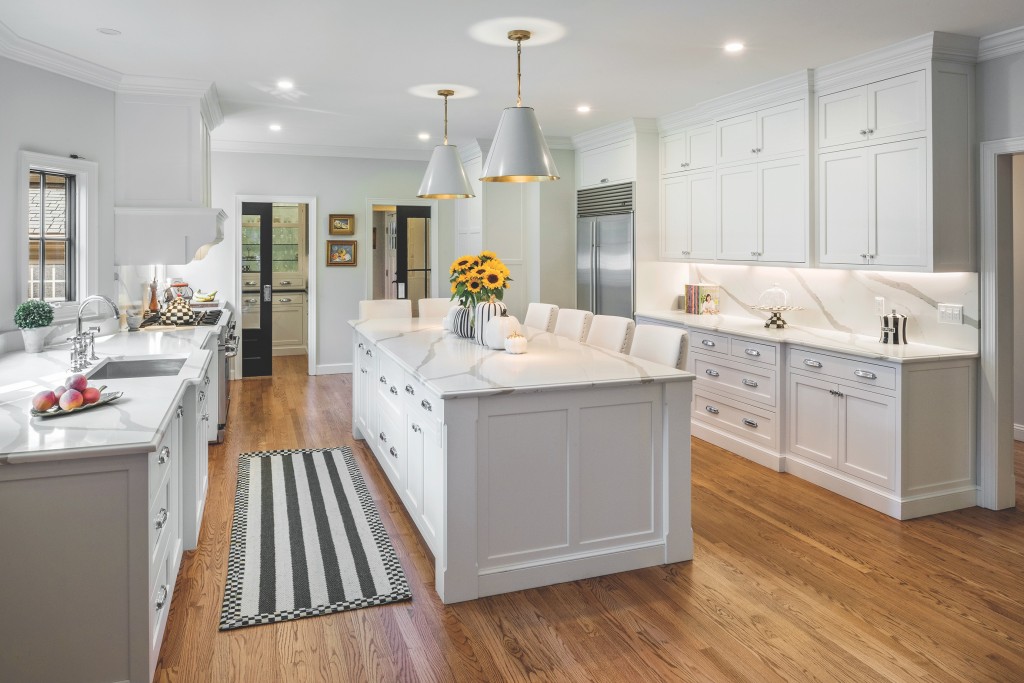 Moreover, the kitchen’s fresh white palette and new hardwoods extend into the living room, intentionally highlighting a piece of commissioned art by Nicholas Kontaxis. Here, Red House also removed one of the room’s built-ins as well as a three-foot raised hearth in front of the fireplace to create more breathing room. New windows and a new mantle make perfect finishing touches.

In addition to the living area, the couple asked Red House to redo the first-floor powder room, which previously featured unappealing entry level fixtures and had a reputation for being the coldest room in the house. The design/build company not only appointed high-end finishes and laid down luxurious heated flooring, but they also dressed up the walls with a vibrant green wallcovering. 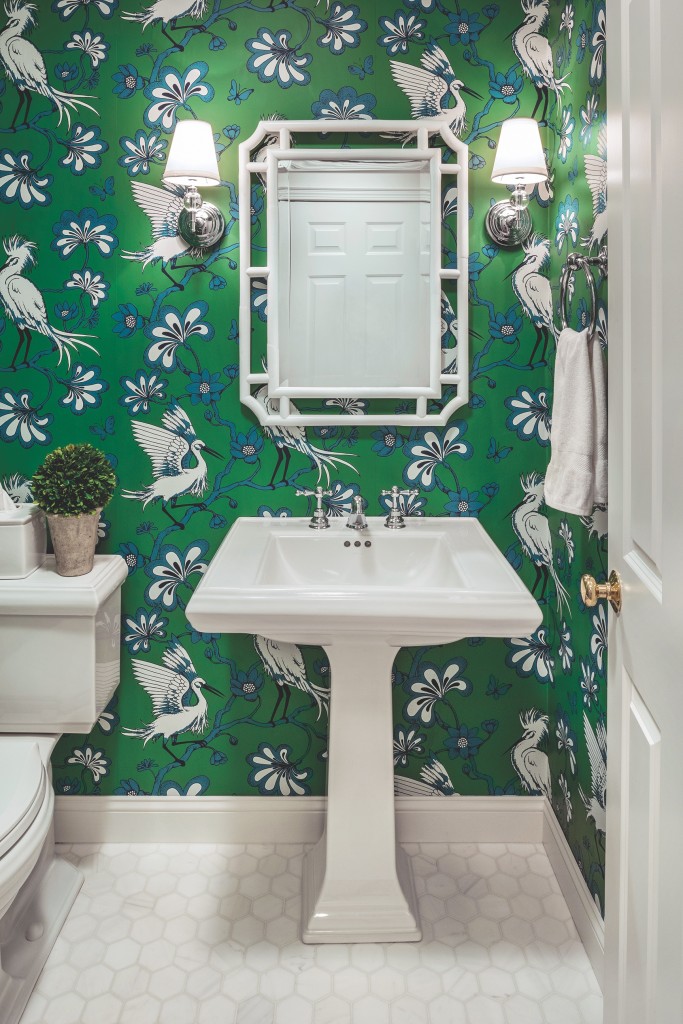 The interior portion of the project was completed in 2019, giving the homeowners their dream hosting space, but Red House was really just getting started. The team was back the following year, working to reimagine the outdated exterior into that of a grand modern estate. 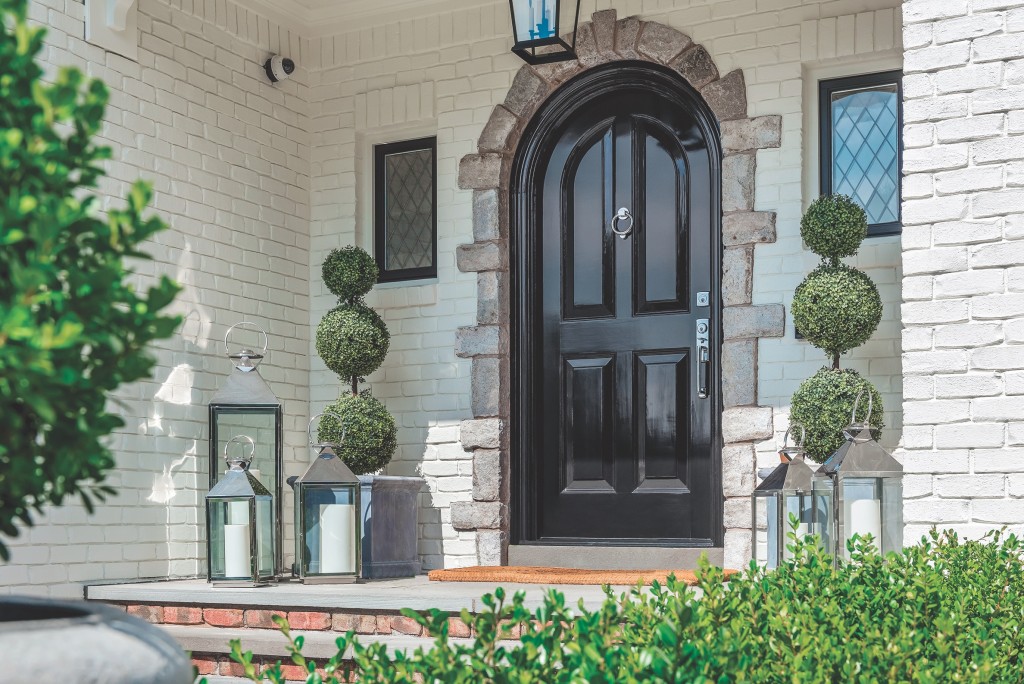 Color was key. Knowing that the homeowners were inspired by and appreciated the simple sophistication of a modern French chateau, Red House elevated the home’s outer layer to an all-white façade complete with contrasting black-framed windows. By replacing deteriorating double hung, six-over-six windows with elegant, four-lite casement windows (matching those previously installed in the family room), Red House created more opportunity for natural light to enter and fill the home. Choosing to makeover the front door with Fine Paints of Europe’s stunning Hollandlac Brilliant Black, the high- gloss paint’s mirror-like finish added luster and sheen to the entrance. Meanwhile, the team revitalized the garage with crisp white paint and black insulated overhead doors finished with a composite overlay that mimics the look of a wooden carriage house door. 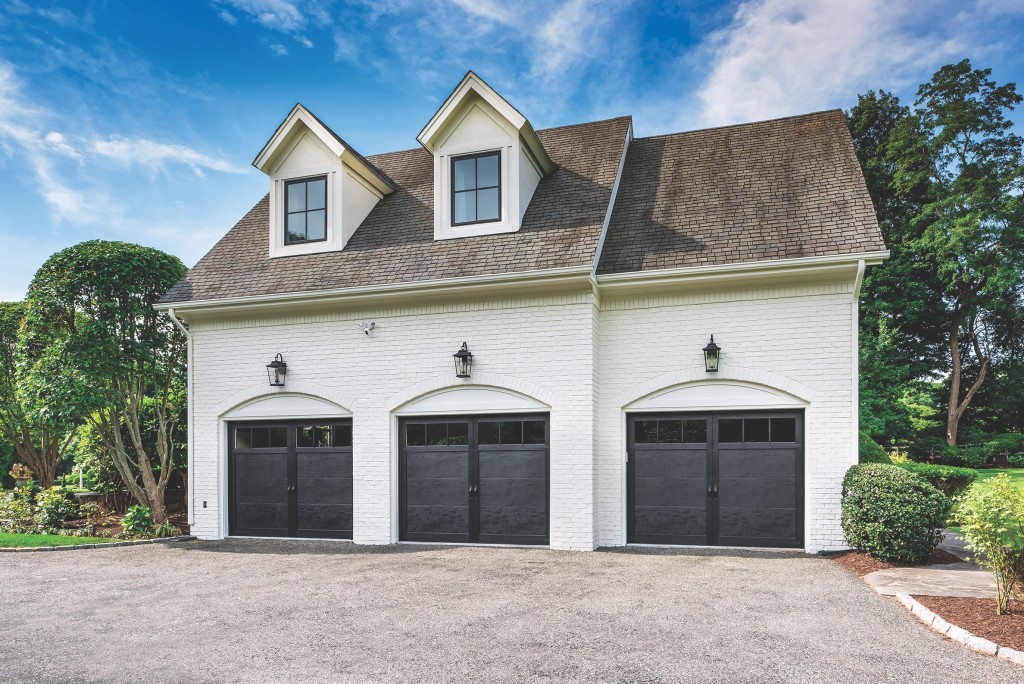 As simple as this color story transformation may seem, the endeavor wasn’t without its hurdles. The original windows were made with finger joint pine. The Red House team specified state-of-the-art fiberglass windows from Marvin’s Elevate line. They feature a beautiful wooden interior that keeps the warmth and high-end finish desired, while out-performing any other material on the exterior. These are also more durable and can be repainted, affording the trend- conscious homeowners the opportunity to change things up down the line. Next, the owners’ bathroom required a large picture window at the back of the house, so Red House specified a Marvin Signature awning window that is perfect for bath ventilation and permits an uninterrupted view of the backyard from the comfort of the soaking tub. Then, while replacing a second-floor sitting area window, the Red House team discovered invasive rot. The lead carpenter removed the affected areas—including exterior stucco, sheathing, framing and insulation—and replaced studs as needed as well as new sheathing and trim. Finally, with the installation of so many new windows, this project could have easily led to a costly, whole-house interior paint job. Instead, Red House engineered a creative workaround that let them replace the windows without disturbing the walls or casing—only touch up paint was required inside. No one likes unforeseen issues during renovation, but when it happens, there is nothing better than an expert on-site to deal with it efficiently and with best practices. 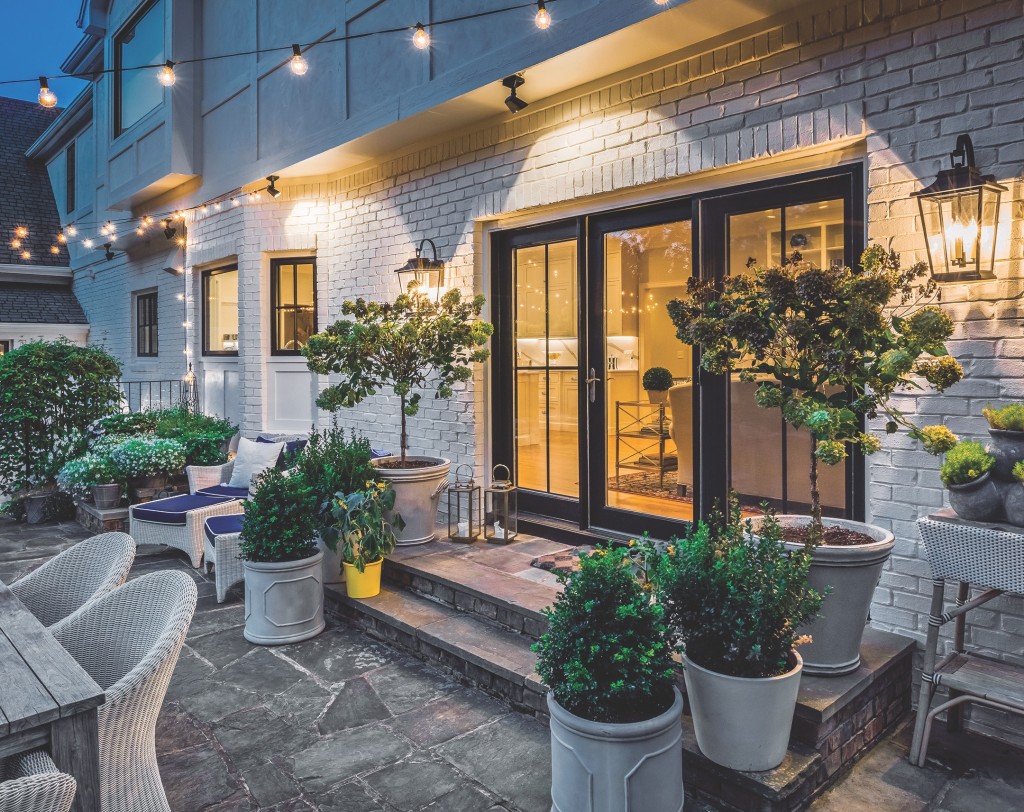 But the work hasn’t stopped there. Red House just finished building out a playhouse in the basement for the couple’s daughter, and the team is set to start on a large addition and landscape project. From the beginning, the master plan for the renovation included specs for a family room addition and a new raised patio. Knowing they would eventually be demolished, Red House left the original patio doors in place, yet still made sure to update them with four-lite grills and black paint to match the rest of the house in the meantime. The Calores are thrilled with their home so far and look forward to working with Red House Design Build again.