Meet the Fresh-Faced Lady Next Door in Warren

The eclectic vintage shop is under new, and stylish, ownership.

There’s a new lady next door behind the teal walls of the titular vintage shop on Water Street in Warren. But to be fair, Christine Stulik really isn’t all that new. “I grew up as a quirky teenager in Barrington, and a friend first brought me to the shop when I was a senior in high school,” she recalls. “From then on I would spend hours in the back trying on vintage dresses and hats.”

She also got to know Sandra “Sandy” Nathanson, the “fierce, awesome and inspiring” woman who founded the Lady Next Door. Stulik went on to major in theater at Northwestern University in Chicago, but whenever she returned home, she always made a point to visit the shop. In that time, the two bonded over their mutual love for the performing arts. But as it turns out, Nathanson was much more than an admirer: she was Trinity Rep’s prop master and set decorator from the late 1960s to the early 1980s and worked closely with local legends including Adrian Hall, Richard Cumming and Eugene Lee.

Thanks to her extensive career and discerning eye, Nathanson became adept at sourcing and collecting rare items. As Stulik tells it, sometime before retiring, Nathanson became friends with the owner of the Square Peg, a former Warren antique store for which the current Square Peg tavern is named. The owner eventually gave her space in the backroom facing Water Street to sell some of her own finds. When people walking by asked him about the products in her window, he would respond, “That’s from the lady next door.”

Thus, the name was born. It became an even more fitting moniker when she eventually set up shop in the neighboring building. Nathanson then became a self-taught expert in all things antique and vintage, going on to run the shop for thirty-seven years.

“She was pretty badass; she really knew her stuff,” Stulik says. “I got to know vintage clothing through her. I’d say a third of my permanent collection is from Sandy.”

Meanwhile, Nathanson nicknamed Stulik her “theater friend.” The two kept in touch while Stulik worked and toured with the Hypocrites theater in Chicago, performing in more than fourteen productions and 600 shows across six years. They continued to check in when she later moved to New York.

“I never wanted to be a New York actor. I took a job in estate professional organizing and move management, essentially helping people declutter, downsize, clear out relatives’ estates, things like that,” Stulik explains.

Yet little did she know, life had a very different plan in store. 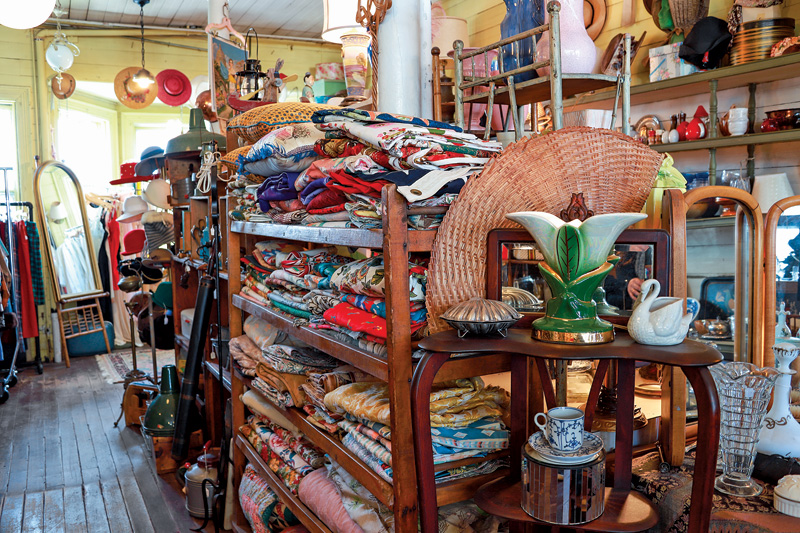 In March of 2020, Stulik, like most Americans, faced a pause in her work. So, again like many others, she decided to ride the pandemic out with loved ones. But because her Barrington-based parents work in health care, she opted for an Airbnb in neighboring Warren. A few weeks in, while wandering down Water Street, she decided to pay her old friend a visit.

“The shop had been open on and off, not just because of the pandemic but also because Sandy’s health was failing. She was taking more and more time off,” says Stulik. “She was eighty-six and still heading the shop, which is incredible, but it had been shuttered the few times I walked by in March and April, so I decided to reach out. She said to me, ‘My daughters are telling me it’s time.’ ”

The shop had already been promised to someone else, but Stulik, having both the time and the experience dealing with “stuff,” offered to help with inventory during the transition. Then, two weeks into photo-taking and list-making, the prospective buyer dropped out. Nathanson turned to Stulik and asked, “So, do you want it?”

“I pretty much said yes right away. I knew this was something that would never come around again, this opportunity to take on something that I knew so well and from a person who I knew well,” Stulik says. “People ask me if I always wanted to own a store, but it was never a life goal or something I thought was possible. I didn’t know how fulfilling it could be until I did it.”

She officially bought and took over the shop in June. The first orders of business involved decluttering (“Sandy was certainly a maximalist!”) and ensuring the space was COVID-safe. A complete overhaul, however, was never in question.

“It’s a magical place and I wanted to match her vibe and aesthetic, because it’s an aesthetic I loved and learned from.”

But while the shop was already plenty stocked, Stulik knew that she needed to regularly refresh with new hauls.

“Sandy said, ‘If you like it, buy it. Always be buying.’ So, I’m always going to estate sales, flea markets and thrift stores,” she says. “And some people even come in and donate some incredible pieces to make sure they go to a good home.”

“I really want there to be something for everyone,” Stulik says. “We have a lot of ‘random crap’ — but good crap!”

As they say, one man’s trash is another man’s treasure. Shoppers range from teenagers and college students looking for now-trendy ’80s fashions to collectors in search of rare coins to casual shoppers who are delighted to score one-offs like a collared horse print dress.

“I also love telling the stories behind things, like if a skirt came from the estate of a longtime seamstress. I think it just adds to the experience,” Stulik says. “I remember I bought a dress from Sandy in college, and she said it was an extra’s dress in The Great Gatsby, the one filmed in Newport. I still have it; I’ll never let it go.” 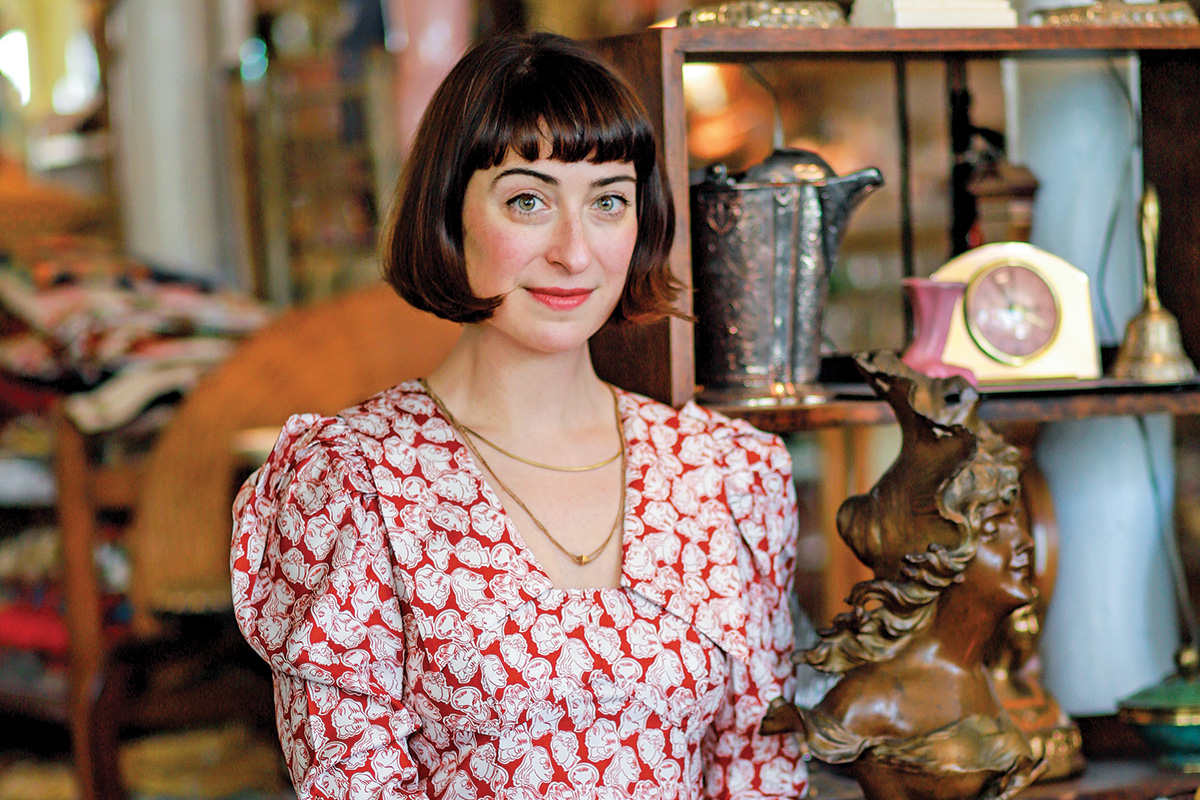 Stulik has also been attracting new customers with renewed social media and digital efforts as well as new store hours (where Nathanson usually opened two days a week, Stulik opens four, plus offers by-appointment-only hours any day of the week).

“It’s like three jobs. One, staffing the store; two, doing the business and marketing sides; and three, buying things,” Stulik explains. “It’s a lot. I’ve really given myself a crash course, but it’s fun.”
The community has made the undertaking a bit easier, welcoming her with open arms.

“They’ve been incredible. I think it helps that Sandy and the store were so loved. People have been really positive about the fact that I’m keeping it going, which is really nice, especially in times like these,” she says. “My fellow antique store owner Nick Haus down the street has been wonderful and a source and the Discover Warren merchants association has been awesome. I feel like I’ve found a family.”

And she had the support of Nathanson herself, if only for a short while.

“When I first signed, she said, ‘Alright, I guess I’m never gonna see you again!’ And I said, ‘Are you kidding me? You are an encyclopedia, why would I ever not use you?’ Plus, we were friends,” Stulik recalls. “I would call and say, ‘So, that lamp in the back corner…,’ and she’d immediately answer, “That’s a 1940s such and such.’ She knew everything. I am so appreciative because I don’t think I would have been able to do this otherwise.” 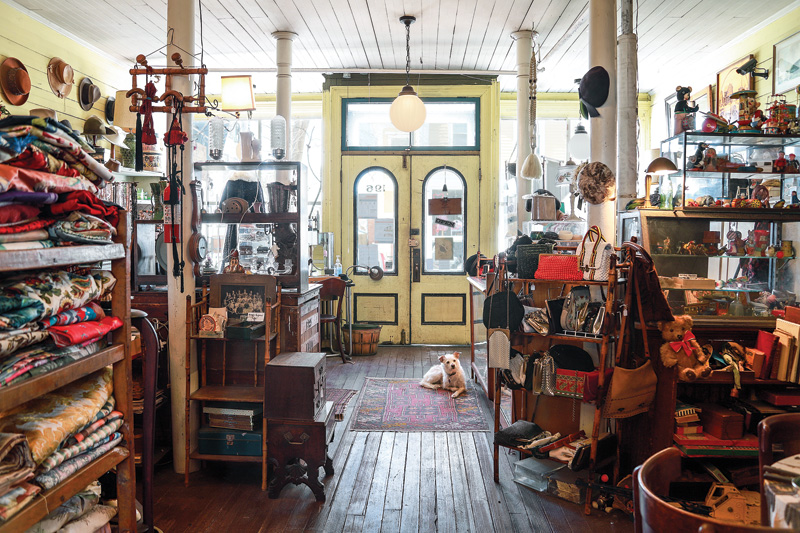 Stulik made sure to preserve Nathanson’s overall aesthetic when taking over the shop. Photography by Meaghan Susi.

Unfortunately, Nathanson’s health took a turn for the worse in December.

“I didn’t want to bother her with trivial questions, so I made myself suck it up and figure things out on my own. And finally, I was like, ‘I think I got this.’ I started to get confidence for the first time.”

Knowing her beloved shop was in good hands, Nathanson died peacefully surrounded by family just before the new year. Though Stulik misses her friend, she recalls one long conversation they shared a couple weeks prior.

“She had been known for her beautiful window displays and she had told me that I would never live up to them,” she says with a laugh. “So, I knew I had to go all out for the holidays. I received a lot of compliments, even from friends of hers. During that call, she said she had seen them and that they were great — but she just had one note.”

Despite the pandemic, Stulik says business has been steady and she’s been keeping busy. People still come in on occasion asking for the original lady next door.

“It’s cool to know she really made an impact. I’m very honored to be carrying it on,” she says. “And I know she’s proud of me. She told me so.”