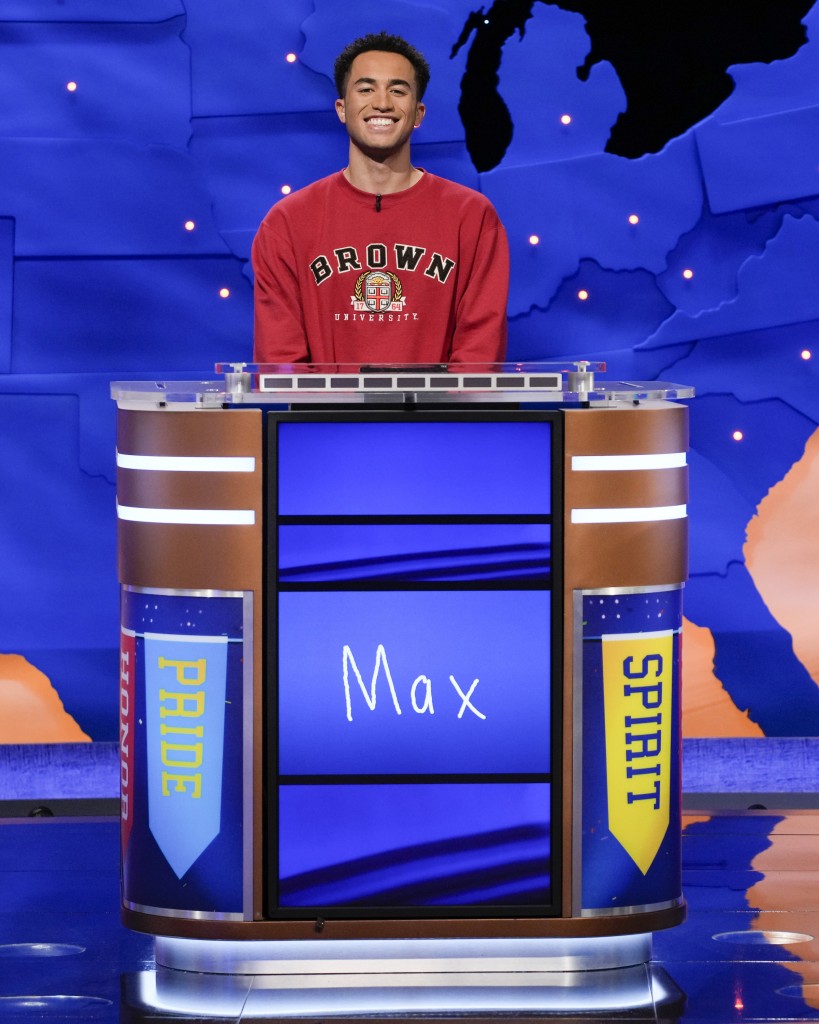 Max Niles, a senior at Brown University, is set to compete on “Jeopardy!” on Friday, February 11. Photo by ABC/Casey Durkin

Rhode Island will get a nod on “Jeopardy!” tomorrow, Friday, February 11, when a Brown University senior competes in the show’s National College Championship.

Max Niles, a native of Washington, D.C., is set to compete on day four of the championship, which airs tomorrow on ABC. Niles will face off against students from the University of Southern California and the University of Texas during a two-game episode beginning at 8 p.m.

Niles, who studies history and public policy, says it’s not the first time he’s tried to appear on the hit game show. Growing up, he typically watched “Jeopardy!” following the “Nightly News” during dinner with his mother and grandparents.

This latest attempt came about after a friend shared a link to the College Championship online try-outs. Niles completed a 50-question test then participated in a mock game over Zoom early last year. In October, he got a call that he would be on the show.

Filming took place at Sony Pictures Studios in Culver City, California, over several days in the week before Thanksgiving. Due to COVID-19 restrictions, guests were not allowed on set, and the entire audience was made up of contestants.

“It was surreal. I’ve been watching ‘Jeopardy!’ my entire life and then I was on the stage and ringing the buzzer and answering questions. It sunk in every single time that I was there,” Niles says.

The most difficult part, he says, wasn’t answering questions. It was outcompeting his fellow contestants on the buzzer.

“When you’re there on stage, it’s just so much adrenaline happening. I tell people after, I don’t know what happened when I was on stage. I blacked out,” he says.

Along with his fellow contestants, he had a chance to meet host Mayim Bialik, who kept them entertained with jokes while they worked through minor technical difficulties on set.

At Brown, Niles has worked as a programming coordinator for the Ivy Film Festival and volunteered at William D’Abate Elementary School in Olneyville as part of the Brown Elementary Afterschool Mentoring program. He also served as a member of Housing Opportunities for People Everywhere, which works to combat homelessness.

Niles follows in the footsteps of former Brown University contestant Dhruv Gaur, who achieved viral fame in 2019 when he wrote “We 🖤 you Alex!” as his answer in Final Jeopardy. The response attracted attention and caused longtime host Alex Trebek — who was then battling pancreatic cancer — to choke up.

If he wins tomorrow, Niles will move on to the semifinals, set to air later this month. He says he plans to watch the show with friends on a projector outside a house in Providence.

“People were really, really excited. I posted on my Instagram story and just everybody from elementary school friends [reached out], it was really cool. Everyone was just so proud of me,” he says.