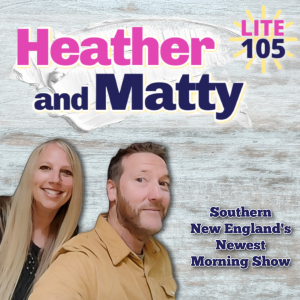 Some of the greatest searches of all time include finding a replacement for New England’s beloved Tom Brady, the hunt for Al Capone’s vault by Geraldo Rivera and Bob Ballard’s quest for the Titanic. Today, we might say Rhode Island’s greatest search comes in the form of a new co-host to complement Heather Gersten, an eighteen-year veteran of mornings on Lite 105/WWLI-FM.

Introducing Matty Blake of Barrington as co-host of Southern New England’s newest morning show, “Heather and Matty”! When he’s not creating joyful banter with Gersten, Blake serves as a host of “The Curse of Oak Island: Drilling Down” and “Beyond Oak Island,” two shows associated with the number one-rated non-scripted series, “The Curse of Oak Island,” on the History Channel. Blake has worked for the Golf Channel, NBC Sports, VH1 and Comedy Central and has guest starred on TV shows including “30 Rock,” “Boardwalk Empire” and “Alpha House.”

Heather told us, “I met Matty twenty years ago at a radio station in Boston and we have wanted to partner on a show ever since, so it’s a dream come true.”