It’s the End of the Beginning of the Coronavirus Outbreak

The coronavirus outbreak blasted holes in Rhode Island's already-frayed social safety net, and the pandemic isn't over yet.

Between the spring of 1918 and the summer of 1919, the Spanish flu — so named for the first country to report the pandemic — swung a scythe around the globe. More than 500 million people were afflicted and an estimated fifty million died. The virus whirled in the centrifuge of World War I, spreading with troop movements and striking healthy young adults. By the time President Woodrow Wilson signed the Treaty of Versailles in June 1919, this virulent H1N1 strain, having infected a third of the world’s population and taken its victims, was dying out.

Despite its devastation, the pandemic of 1918 was swiftly forgotten. The wartime information blackouts, combined with the era’s poor record-keeping, left little data behind. And yet its effects rippled on, pushing social currents in different directions. Americans lost faith in science and turned to alternative medicine. Russia decided that the best hedge against infectious disease was socialized health care. Historians have linked Spanish flu mortality with a rise in political support for extremism in Germany, and to a short-term boost in manufacturing wages in some United States cities. Life expectancy dropped ten years.

Today, any armchair epidemiologist with a Google habit knows the outline of that century-old crisis. Looking to the past for parallels to the present and for clues to the future has become a frequent topic of news articles. But COVID-19 will teach its own lessons. As we near the end of the beginning of this pandemic, some Rhode Islanders are considering the vulnerabilities exposed by this ongoing stress-test and how we close the gaps. 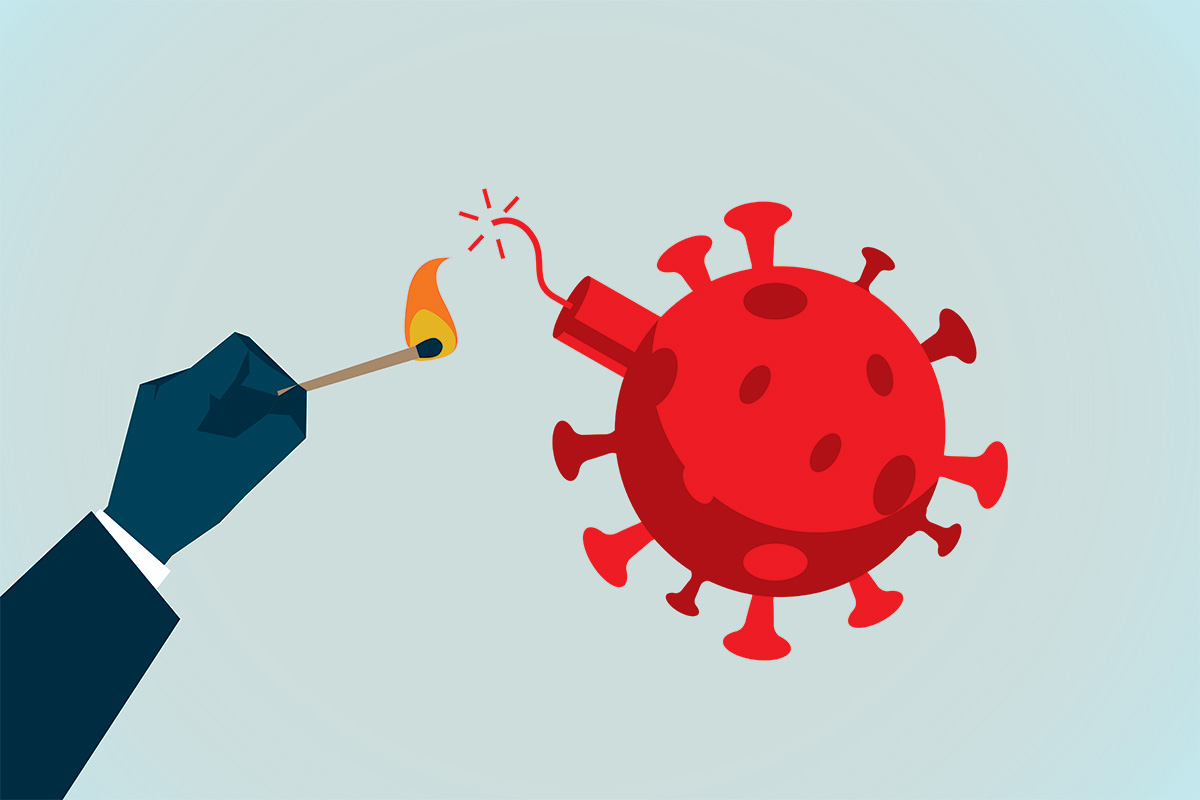 One weak spot is the food system. A toilet paper shortage was the first indication. Then, the chocolate chips disappeared and the signs limiting meat purchases took their place alongside the price placards. Empty grocery store shelves have been a potent symbol of COVID-19 — and yet, maintaining access to food typically has not been a part of emergency planning, says Nessa Richman, network director of the Rhode Island Food Policy Council. At the turn of the last century, nearly 40 percent of Americans farmed or lived in rural areas. While the food system had begun to industrialize, the supply chain was nowhere near as atomized as it is today.

“When you have a really efficient global food system, it has a certain fragility,” she says. “When there’s a shock to a highly efficient system, it’s difficult to be nimble.” Images of crops plowed under for want of a way to harvest or market and 1,000-car lines of hungry Americans at a food distribution center show “we are seeing the fragility of the system play out, and we are thinking about how to mitigate our risk, and out of all of this create a stronger, more resilient system.”

Rhode Island, which produces 3 percent of its food needs, cannot do it alone. But the council is working with its counterparts in the other New England states to strengthen the regional food system. In 2014, Food Solutions New England, a network of advocates for food sustainability, issued a plan calling for the region to produce 50 percent of its food needs by 2060. Richman says state partners have begun talking about trying to speed the timetable, and how to create state-level policies to make it happen and to create consistent consumer demand for local products.

On the ground, Farm Fresh Rhode Island coped with the practical realities. As the farmers’ link to retail and wholesale customers, Farm Fresh has been able to divert its resources to beefing up retail sales. Local meat, once a hard sell to institutional customers, became a hot ticket. But upstream, farmers were having a hard time getting their products processed.

“It hit like a big wave. There aren’t a lot of slaughter houses, and there is a backlog. So, we have a meat supply chain that shows the local food system wasn’t ready for the so many home customers,” says Farm Fresh co-executive director, Sheri Griffin. “Why can’t I get a local apple at the local grocery store? I’ve been working at Farm Fresh for thirteen years, and the question is still there. This is so complicated. There’s not one key. You have to work on whole the system.”

In the state’s eighty-one nursing homes, COVID-19 waged an all-out assault on the vulnerable residents, the staff and the financial foundations of the facilities themselves, as nursing homes were still untangling the snarls created by the Unified Health Infrastructure Project (UHIP). In theory, the computer software system, launched in 2016, would streamline federal and state benefit programs. In practice, UHIP nearly cut off the flow of Medicaid, which supports the majority of nursing home patients in the United States. That was on top of the slow starvation diet state leaders had imposed on the homes by failing to provide the required Medicaid Inflation Index increases for eight years running.

Slim budgets have meant bottom-of-the-scale wages for workers, and it was common for staffers to work in multiple homes to try to make ends meet, says Scott Fraser, president of the Rhode Island Health Care Association. Controlling COVID added operational costs as their workforce was diminished by fear and an illness that could be easily transmitted as staff moved among different facilities.

“The state’s nursing homes have been underfunded for years and still, we have been able to provide high quality services,” he says.

Hospital-based care suffered from a lack of planning, says Linda McDonald, president of United Nurses and Allied Professionals, which represents 6,500 nurses, technologists, therapists, support staff and other health care workers in Rhode Island, Vermont and Connecticut. Supply shortages forced infectious disease control protocols — like single-use personal protective equipment — to be abandoned. Critical conversations about screening incoming patients and separating the COVID positive from others were late. Hazard pay for the workers who put themselves in harm’s way — including the housekeeping staff — was another after-thought.

“Never again will we allow ourselves to be so unprepared for a crisis,” she says. “I’m not convinced we are ready for the next one. We have not had the conversation about testing and screening. We need policies already in place when the next wave comes, when the next virus hits.”

“It’s not a health care system,” he says. “We do not have services we can deliver in a systematic way to everyone who needs them. We have people who sell the service and market the service and we hope people respond to that market. Health care is not a consumer good, it’s an essential service.”

The United States has, per capita, the world’s most expensive health care, and yet we get so little for that money. We’ve invested heavily in fancy technology but not in primary care, resulting in the developed world’s lowest life expectancy, the highest chronic and preventable disease burden and the highest suicide and obesity rates. COVID has disproportionally affected the poor, Fine says, revealing something about “who we are and who we’ve been. We have the highest case incident rate, because the government decided not to shut down manufacturing. Only 20 percent of people of color can work home. Ninety percent of people in Central Falls went to work and got the virus at work and bought it back in minivans from Cowden Street to their over-crowded triple-deckers.”

COVID ripped super-sized holes in an already frayed social safety net. The Rhode Island Foundation, which has long played a complementary role in funding social welfare nonprofits, realized that business as usual — distributing the funds already budgeted for grant-making in 2020 — was not up to the demands of the moment; it needed to do more. By early June, its COVID-19 Response Fund, established with the United Way, raised and awarded $7.6 million. Foundation President Neil Steinberg says “We have started a current use fund. We’ve developed a new approach to go out and raise the money right now.”

As generous as the state’s corporations and individuals have been, their contributions cannot replace the deep erosion of government benefits to needy families and individuals. For example, the current unemployment insurance benefits system, designed in the wake of the Great Depression, does not address the realities of the gig economy. (Under the federal CARES Act, passed in the midst of the crisis, self-employed workers whose income has been affected can collect unemployment.) Rhode Island’s Temporary Assistance to Needy Families has one of the most restrictive time limits in the country; the cash payments have been frozen for thirty years.

“One of the things COVID has shown is that we should be taking care of all of our residents because everyone is affected by this virus. The people we are now calling essential, one in five of them earns less than 200 percent of poverty level,” says the Economic Progress Institute’s Executive Director Rachel Flum. Higher taxes on the wealthy may return to the table, she says, as “people realize we need a serious conversation about how to afford the goods and services we all need.”

COVID-19 and the Spanish flu have not run in perfect parallel. Each exploited the population and the human body differently. Today’s medical community understands viruses and vaccines much better than it did in 1919. But both pandemics have plotted a rough line to the rotted spots in society’s infrastructure.

The summer of 1919 should have been a time of jubilation. The Great War was over and the great pandemic had receded. Instead, racial tensions exploded. Returning African-American soldiers competed in the post-war economy with their white counterparts. And the latter reacted with violence that spread across the country: twenty-five riots, ninety-seven lynchings and, in Elaine, Arkansas, white mobs killed about 200 African-Americans in a three-day rampage. The streets ran so bloody, historians call it the Red Summer.

“One thing is crystal clear,” says Grow Smart RI’s Executive Director, Scott Wolf. “All of the racial and economic disparities that we’ve all known about will have to be addressed more aggressively and creatively. It’s not just a matter of job access or wealth distribution. Now it’s a matter of life and death.”