Is Rhode Island Ready for the Census?

Billions of dollars and a congressional seat are on the line.

It is peak Festival Guatemala, and a warm September breeze carries the sounds of the marimba up over the rise of the hill, where it mingles with the smells of tamalitos and papusas, a street food snack of stuffed corn tortillas. The sky-blue and white of the Guatemalan flag flaps from poles and adorns the bands of straw hats and umbrella canopies shading families arrayed around the Temple to Music performance stage.

Amid this annual celebration of all thing Guatemalan, Galen Auer, of Common Cause, and Kristina Contreras Fox, from the Rhode Island Coalition for the Homeless, sit between two food booths, with friendly faces and a basket of lollipops, representing the 2020 census. Their banner-draped table announces: “I Count. You Count. We All Count.” 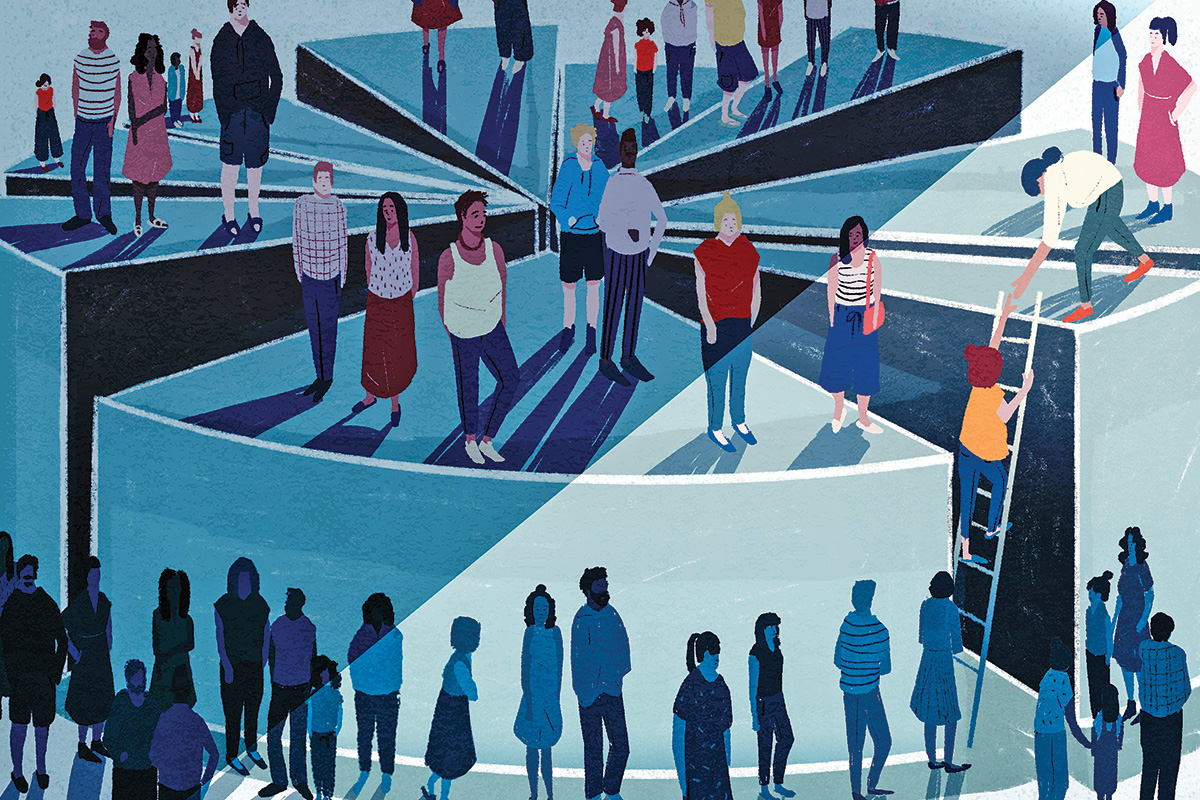 In 1990, the census counted 4,056 Rhode Island residents who were Guatemalan. A decade later, their numbers doubled to 8,949, and in 2010, they doubled again to 18,852. In total, Guatemalans only make up about 1.2 percent of Rhode Islanders, but they are the second-largest Latino sub-group, says Contreras Fox.

The pair’s presence is part of an ongoing state strategy to raise the profile of our national decennial exercise in anticipation of the actual count, which will begin in the spring. But, besides a few questions about census jobs, business is slow. And then Elena Almonte steps up to the booth.

“Oh, the census,” she says. “We didn’t fill it out last time. I was too busy, and I can’t believe I didn’t do it. I was sad; we weren’t going to be counted this time around.”

Ignoring the United States census inflicts more than bad feelings. These data are the foundation of all kinds of deeply consequential political, economic and policy decisions. The census determines how the federal government will allocate nearly $800 billion to each state — funds used for everything from highway construction to community development block grants to food stamps to Medicaid to special education and school lunch programs. Census data determine how United States House seats are apportioned and how state and local legislative districts are drawn. Last December, re-apportionment expert Kimball Brace predicted, based on the most recent census numbers, that Rhode Island’s slow population growth would cause it to lose one of its U.S. House seats to the faster-growing Arizona. State officials, school committees and businesses use census data to make investment decisions and public health and economic development policies. If you don’t get it right, you live with the results for a decade.

Rhode Island, the second most densely populated state in the nation with nearly 12 percent living below the poverty line, has organized itself this time around to make sure no one is missed.

In 2018, Governor Gina Raimondo convened the Rhode Island Complete Count Committee, co-chaired by Central Falls Mayor James Diossa and Department of Health Director Dr. Nicole Alexander-Scott, with sixty-one members drawn from every possible stakeholder and community group. It was charged with creating and deploying public awareness campaigns that would reach into every nook and cranny of the population. The group and its subcommittees began meeting in January and delivered its final outreach plan in June. The state has budgeted $1.2 million — $500,000 in state funds, $200,000 in federal funds and another $500,000 from the Rhode Island Foundation — in support.

Participation is mandatory, but not everyone does. In 2000 and 2010, Rhode Island’s response rate was 73 percent — in 2000, above the national average of 67, but in 2010, below the national response rate of 74 percent. Largely white suburban counties had the highest rates. In 2010, Bristol County delivered a 79 percent rate, while Providence County posted a 70 percent response rate.

Diossa, whose entire one-square-mile city is a hard-to-count tract, says “the challenge is not a Central Falls challenge or a Blackstone Valley challenge. We have to try our best to have everyone counted because it will benefit all and the effects of an inaccurate count will be felt by all.”

In 2018, the state got a peek at what its 2020 census self-report rate might look like. Providence County was the sole site of the United States Census Bureau’s “end-to-end” test, a dress rehearsal for the actual census, which includes collecting self-reported responses and follow-up in-person interviews for non-responsive households. The 2020 census will be the first to collect information via the Internet and phone, as well as traditional paper questionnaires. The bureau uses the test results to assess its field operations and procedures.

The bureau did not advertise the test, and the self-report rate was a dismal 52.3 percent. Nonetheless, says Jeff Behler, census director for the New York region, “our goal was just over 49 percent so we surpassed that.”

The state Complete Count Committee, however, wasn’t heartened by the results. Providence County is a petri dish of hard-to-count populations: the homeless, immigrants, residents whose first language is not English, low-income, racial minorities and college students, among other groups.

“About 17 percent of households in Rhode Island do not have the Internet,” says Marcela Betancur, executive director of Roger Williams University’s Latino Policy Institute and head of the hard-to-count subcommittee. “Many renters think they don’t have to [fill out the census form], that it’s the landlord’s responsibility. Parents of children under four are hard to count. And families of color don’t believe the census is important, and don’t trust the government to hold this information private.”

The Complete Count Committee has been developing outreach plans specific to each hard-to-count subgroup, crafting the most effective messages and recruiting a network of trusted messengers to deliver them.

“Twenty percent of the state is hard to count,” says Rhode Island Department of Health Deputy Director Ana Novais. “We asked every member of the committee to identify: Who are trusted partners within the African-American community? Who does the Hispanic community respond to? And we conducted the same exercise for each of these groups.”

The census is, by design, supposed to be completely confidential and apolitical. Federal law prohibits the Census Bureau from publishing an individual’s personal information or sharing it with any other government agency or court of law. Census Bureau employees take a lifetime oath to protect respondents’ confidentiality, with severe penalties for violations.

“We really take that seriously,” says Behler, “although many of our partners are not aware of those protections.”

But the 2020 census blew up into a political firestorm over a Trump administration plan to add, for the first time, a citizenship question. It drew immediate opposition over its legality and its potentially negative effect on achieving a complete count. During the year-long saga, Commerce Secretary Wilbur Ross claimed the question’s purpose was to help the Department of Justice enforce the 1965 Voting Rights Act. But three lower courts rejected that argument.

In June, computer files by the late Republican strategist Thomas B. Hofeller revealed his involvement in the citizenship question, going back to a 2015 study showing how it could be used to depress the response among traditionally Democratic groups and create future partisan gerrymanders advantageous to Republicans. By the end of that month, the United States Supreme Court ruled the citizenship could not be added because Ross’s reason for its inclusion was “contrived.” With time running out and the legal obstacles mounting, Trump dropped the fight.

“This administration, in a very pernicious and disturbing way, engaged in the misuse of the census as a way to consolidate power,” says United States Representative David Cicilline. “It’s a very a dangerous practice and undermines the mandate in the Constitution that requires the counting of every person in the U.S.”

The citizenship question is gone, but the unease lingers.

“The biggest challenge in the Latino community is the citizenship question,” says Oscar Mejias, president of the Hispanic Chamber of Commerce. “A fear exists even when the question was struck down by the courts. Not everybody has that information.”

On this September Sunday, those worries seem far from the minds of festival-goers dotting Roger Williams Park. And Auer and Contreras Fox offer Almonte some comfort; she didn’t miss the actual census, just the field test. She’ll get another chance to be counted. Almonte smiles and takes some literature.

“The Latino population is growing, and I wanted to do it for the awareness of the people,” she says. “When you have the data, it makes a big difference.”