Inside the Living Sharks Museum, a Free Shark Lover’s Paradise in Westerly

Big mouth, sharp teeth and surprisingly astute: There's a lot to learn about sharks at this tucked-away emporium.

“Many people watched Jaws and very quickly became afraid of sharks,” says Keith Cowley, founder and creator of the Living Sharks Museum in Westerly. We’re settled in the middle of the compact yet jam-packed space surrounded, naturally, by all things shark.

A documentary plays idly on an old TV screen to my left while a megalodon jaw gapes behind Cowley. “It’s the mystery of what’s beneath mixed with the primal reaction to the predator in a primal scenario.”

My mind flashes back to my first viewing of the 1975 classic. Just eleven years old, I spent much of the film beneath the protection of a blanket. It then took me, an avid beach goer, a good month before I could wade into the surf past my knees. My next shark “experience” came a couple years later, when a substitute teacher with a missing pinky finger shared her harrowing story of a Hawaiian surfing trip gone wrong. It’s very likely the reason why I never picked up the sport.

Cowley, on the other hand, was only ever fascinated by the toothy fish.

“Sand tiger sharks have always been near and dear to me because I grew up by an aquarium that had them. I now prefer my sharks in the ocean but experiencing that as a child did help nurture the intrigue,” he says. “I was never really certain in my early years what my path was going to yield, though. I knew I loved paleontology — fossil collecting and learning about prehistoric creatures — and I knew I loved historical biology and nature.”

A Connecticut native, Cowley found there weren’t many fossil hunting opportunities locally, besides the rare occurrence when a storm system would dredge up deposits near Martha’s Vineyard or Block Island. So he consulted old geology books and maps to discover digging sites elsewhere. His research brought him to Maryland, where the Chesapeake Bay’s eroding cliff system often turns up long-buried prehistoric vertebrae material — some as old as two to eight million years. He then spent weekends and summers off in high school driving the seven hours down the coast to dig and dive. 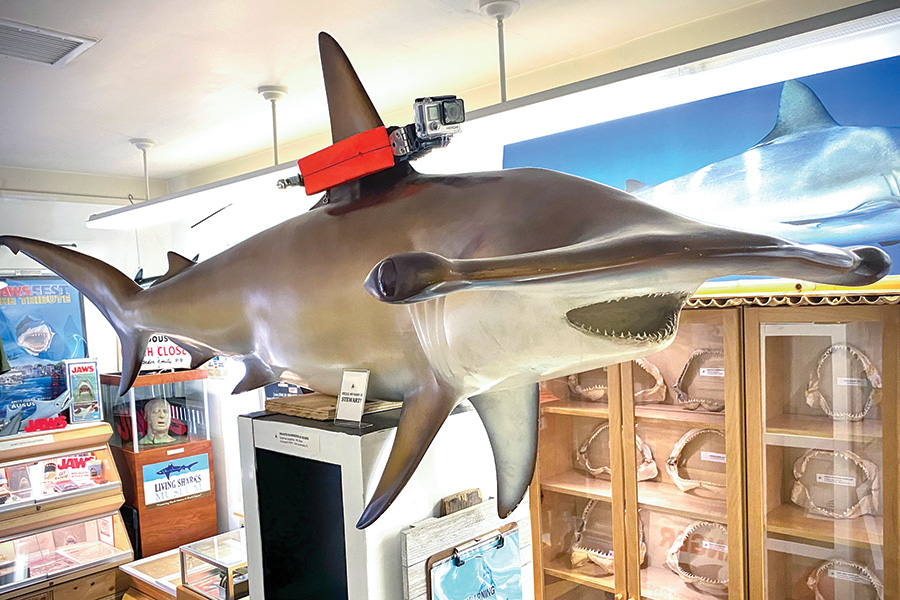 From there, Cowley relied on his scientific illustration and exhibit/interpretive graphic design skills to keep his gas tank filled. During his adventures visiting different fossil sites across the country, he connected with many influential people in the field, learning techniques in identification, removal and preparation of fossils for exhibition. Knowing that he wouldn’t have the opportunity to attend college and pursue the subject academically, he took advantage of any opportunities that arose. Eventually, a chance meeting in Arizona at the largest fossil show in the world led to a curator role for a paleontology museum back in his home state. There, Cowley developed programming and lesson plans in geology, paleontology and biology. After assisting with the design of two dozen full-scale prehistoric animals for the attraction’s mile-long trails, he went on to work with Triebold Paleontology for Mystic Aquarium, eventually diverting his focus to developing educational programming and exhibition enrichment. These experiences both helped fund additional trips and afforded him the skills to head his own museum one day.

Then the recession hit in 2008 and things got tricky. Cowley decided to settle in Westerly and streamline his interests.

“I worked as a NOAA contractor for the next five years, doing fisheries interviewing and monitoring shark tournaments,” he says. “It really opened my eyes to the current issues shark populations face around the world.”

In addition to tournaments, which are legal in the United States despite barbaric practices and offer large cash incentives, one of the main threats to shark populations is the illegitimate finning industry. Shark fin soup is considered a high-price delicacy across the globe, and upwards of seventy million sharks are targeted each year. Poachers often remove their fins and dump them back in the ocean to suffocate — many sharks need their fins to move and pass water through their gills — or bleed to death.

“It’s very unfortunate. It’s illegal in most countries, but hard to crack down on in unregulated waters where enforcement is near impossible, plus there are many loopholes in the laws that poachers take advantage of,” Cowley says.

This knowledge further increased his desire to assist in conservation efforts. He began supporting existing organizations both as an educator and through his own art sales. He also helped other artisans produce works and additional products where proceeds could benefit the organizations’ efforts through his moniker, Wild Animal Trust. Through that process, Cowley made numerous connections in the shark conservation world, and partnership development ultimately landed him aboard the M/V Ocearch (a decommissioned Alaskan crabber that appeared on “Deadliest Catch”) in Nantucket in 2018 for the tagging of a female great white shark named Ack. During the trip, he learned firsthand about the science behind their tagging and tracking methods. 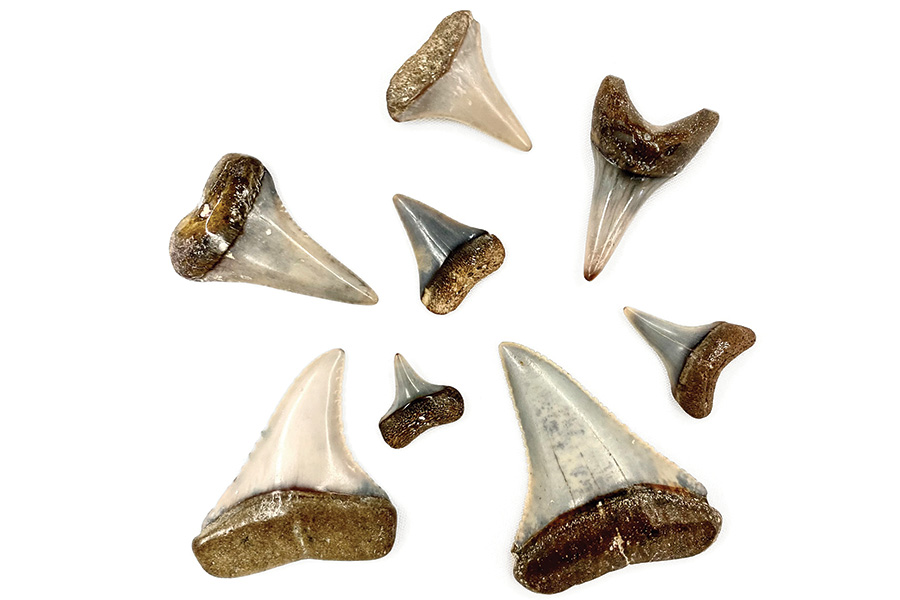 Historically, according to Cowley, shark behavior has been a difficult thing to study outside of physically getting in the water with them or isolating them in a laboratory tank. Tagging technology, however, has allowed researchers to track where sharks go anywhere in the world in real time. For example, by tagging great white sharks on the East Coast, researchers have gleaned more information about migration patterns from Cape Cod down to the Carolinas and back.

“Sometimes they go as far south as the Gulf of Mexico and as far north as Nova Scotia and Newfoundland,” Cowley adds. “The latter is significant because the public tends to think sharks avoid cold waters. But, by using certain tags that monitor water temperature, light and pressure, researchers have also learned that they frequently dive to 3,000-foot depths.”

Behavior studies are more prevalent nowadays through underwater research by divers and cinema science. Cowley says he is looking forward to the mainstream use of new techniques and technologies that do not require hooking, capturing or direct contact with sharks. For now, it’s a goal of his to share how different science teams, organizations and conservation groups have worked and currently strive to achieve their goals.

“Opportunities to experience different methods with these groups continue to help me be a better educator,” he says.

In 2018, Cowley took the plunge and converted his Westerly studio into the country’s first shark history and conservation museum. The Living Sharks Museum’s mission is to educate the public about sharks’ plight through a visual record of their history, exploitation and conservation. Cowley sees it as a place that preserves the artifacts he had only seen in magazines, books and documentaries in his youth, now all under one roof. The museum also proves that there’s so much more than just the great white shark. (Fun fact: The science community refers to them simply as white sharks because there is no “lesser” variety.)

“They’re the most popular so they get the most funding, and therefore the most research, but we now know of more than 540 species. A third of those, however, are nearing a ‘threatened’ classification with many already considered endangered in global assessments, including the shortfin mako,” Cowley says. “Sharks have collapsed in population by 70 percent in just the last fifty years due to overfishing, bycatch and the shark fin and shark liver oil trade.”

But sharks are mean and scary and want to eat us; why should we care? Well, for one, sharks are a necessary part of an intricate network of life. They are the cleanup crew keeping our oceans balanced in removal of the dead, dying and injured. They also instill healthy competition and refinement, which keeps other populations and ecosystems in check.

“It’s a very common narrative that they’re these mindless creatures just looking for blood. It’s misinformation,” he adds. “That isn’t to say that you shouldn’t respect sharks — they aren’t puppy dogs — but your odds of being ‘attacked’ are very slim. Statistically, you have a higher chance of being killed by a vending machine.”

Though sharks have two more senses than humans — they can sense movements in the water across long distances as well as electrical currents — they obviously don’t have hands. When they encounter something new, they tend to use their mouths, which are often quite flexible as well as sensitive, to investigate and determine whether that something is worth committing to bite. As a result, a majority of shark incidents rarely result in flesh removal. Instead, the shark quickly realizes the human isn’t the prey they’re looking for and moves on. 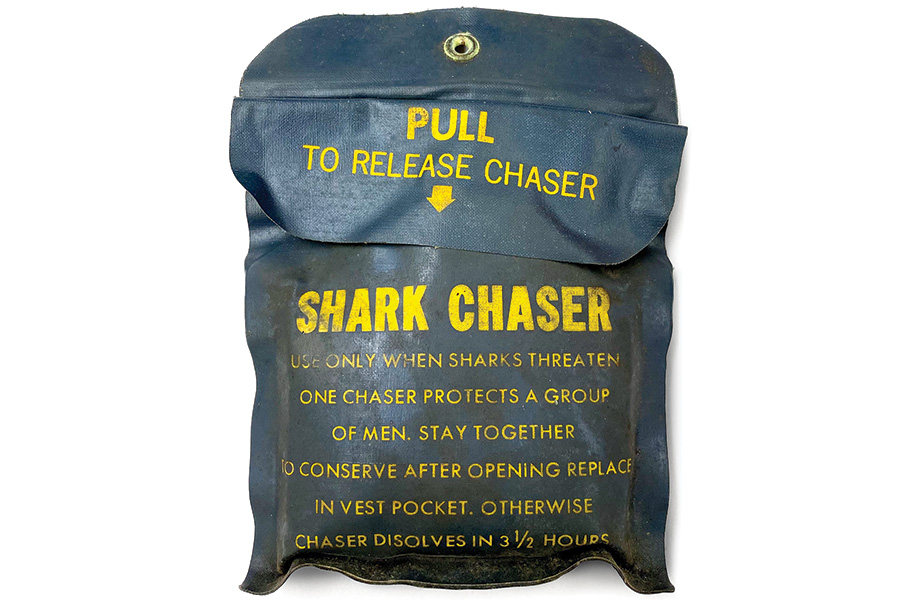 A shark chaser, a shark repellent developed for the United States Navy 1945–1975, which never worked. Courtesy of Keith Cowley.

A lot of the fear comes down to shark exploitation: magazines, novels and films that paint sharks as monstrous creatures. Up until the early 1970s, these exaggerated stories and art renderings were the public’s main point of entry into the world of sharks. But then came Blue Water, White Death, a 1971 documentary in which Ron and Valerie Taylor with Rodney Fox showed some of the first underwater images of white sharks.

“That was a huge step forward,” Cowley says of the film. “Being able to see images and moving pictures of these animals in their environment really began to change the way people viewed and understood sharks.”

Cowley stands to make a similar impact. Open Fridays and Saturdays from 10 a.m. to 6 p.m. (or by appointment), the Living Sharks Museum lets you experience these creatures as never before. Walking in, you can expect to encounter shark teeth from more than forty different prehistoric species as well as more than thirty living species for comparative study; prehistoric vertebrae from animals that may have been part of early shark diets, including prehistoric whales, dolphins and sea turtles; artifacts illustrating shark liver oil production, including bottles given to WWII pilots in hopes of improving their night vision; more than 150 titles in the museum library with additional archives including scientific papers and exploitation magazines; different tagging technologies; information on shark biology; incident survival accounts; deterrent technology examples; an impressive Jaws ’75 collection, including periodicals and props; a gift shop with shark teeth and museum merch and more. Plus, admission is always free. So, while you may not be ready to go cage diving just yet, this museum provides an opportunity to dip your toes into the mysterious yet fascinating world of sharks. livingsharks.org