How Learning to Cook Eased My Pandemic Anxiety

A new hobby became an antidote to fear, boredom, isolation, immobility and, of course, hunger. 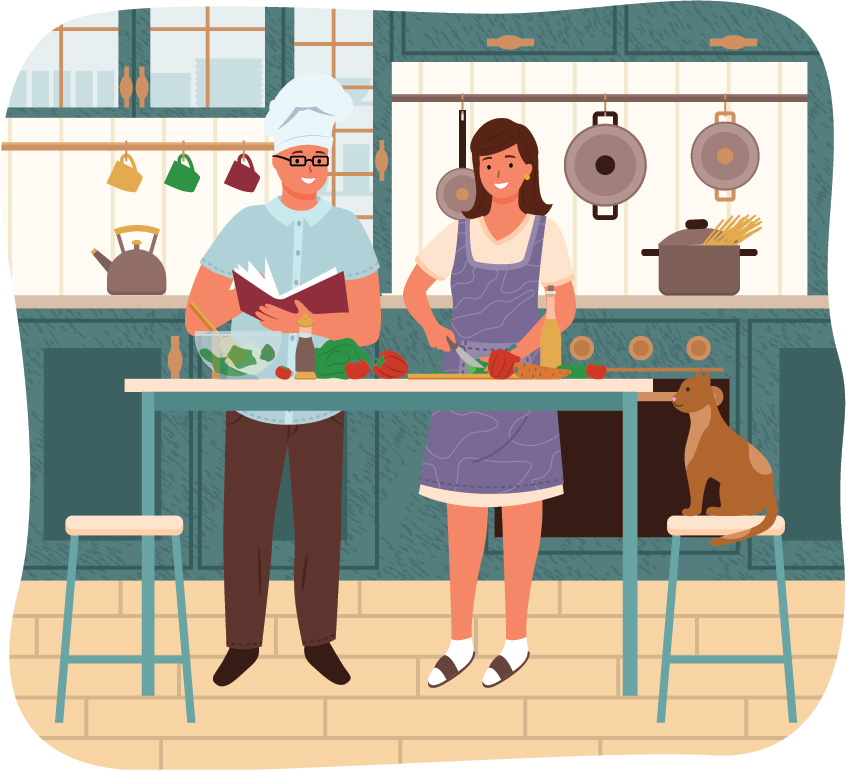 I was thirty-four years old and I was still eating like an undergrad. I ate a lot of pre-cooked food from the grocery store — sandwiches, chicken breasts — and made frequent use of the salad bar. (Remember salad bars?) The proximity of my apartment to Wayland Square, Thayer Street and Wickenden Street made it easy for a steady rotation of options for weeknight takeout: burritos, sushi, pizza, tikka masala. And at least once a week, I had dinner with my parents, who live about a half-mile from me, in the house where I grew up.

These facts are a bit embarrassing to share, and they were embarrassing to live. Now, to be fair, I wasn’t completely lost in the kitchen. I could scramble eggs. I could boil tortellini and toss in some store-bought sauce. I could make a peanut butter and jelly sandwich. But I’m a deeply anxious person with a long history of avoidant behavior. And for most of my life, the kitchen — like motorcycles, amusement parks and most recreational drugs — had been something I avoided.

Since turning thirty, I had been grappling with ever-more-intense waves of anxiety and depression. And this had culminated in a period of burnout during the summer of 2017, when I was physically unable to work for about six weeks. To climb out of that, I went to regular therapy sessions and read plenty of self-help books, and I also began to assemble a new life for myself, piece by piece. “Who am I, actually, outside of being a writer and teacher? And what do I like to do with my free time?” I didn’t have the answer to these questions, but for the first time in my adult life, I was committed to finding answers. Learning to cook was a step in this journey.

And so, in June of 2019, I purchased a subscription to a meal service, HelloFresh, which would deliver two meals with pre-portioned ingredients and easy-to-follow instruction cards, to my doorstep every week. My kitchen was already stocked with some basic tools: a few pots and pans, a couple pairs of tongs, some wooden spoons, a whisk, a few cutting boards, some decent knives for chopping. And by early 2020, I had started to make progress, thanks to the training wheels the meal service offered. I was increasingly comfortable chopping and sauteing. I was starting to get a feel for how long it takes to boil pasta and make rice and the differences between roasting Brussels sprouts and asparagus.

Then COVID happened. The restaurants I still relied on closed down. Sunday dinners with my parents were cancelled, too, out of caution for both their health and mine. Trips to the grocery store started to feel like a life-and-death proposition. I was on my own.

Over the next twelve months my new hobby became something else entirely: an antidote to fear, boredom, isolation, immobility and, of course, hunger. Cooking became the defining pastime of my pandemic experience and, more than anything else, it was the activity that kept me tethered to what remained of my sanity.

Cooking, it turns out, is a great way to mark time. And this is especially valuable when distinctions between “workdays” and “weekends” dissolve, and the days blend into a formless sludge of home isolation. Meals, and the obligatory smartphone photos you take of them, give you things to remember. “The night we made the New York Times mac and cheese.” “That time we made fish and chips.” It’s easiest for me to look back on my cooking-during-COVID journey through culinary phases.

First came the tuna melts. When the pandemic first descended, and I was stuck at home with a pantry and fridge stocked with slow-to-expire ingredients (canned tuna, bread, sliced cheese, Miracle Whip), I started making tuna melts. Greasy, heavy and cheesy, these sandwiches were a comfort food during those first frenzied weeks, and a dish I perfected out of sheer repetition. I learned which bread and cheese worked best (seven grain, Monterey Jack); how much butter to spread on the outside surfaces and how long to grill the sandwich for the perfect golden exterior; how much celery to include in the tuna salad for the optimum crunch factor; and how a little side of honey mustard for dipping takes the whole thing to another level. Undoubtedly, this coping ritual contributed to the first (but certainly not last) pounds I put on during quarantine.

Next came the cooking-as-courtship phase. I was lucky to meet someone during those early weeks. Georgina matched on a dating app, we conducted our first few dates via FaceTime and eventually, cautiously, we met for a walk outside in person. Over time, we became comfortable spending time together indoors and, soon, we were hanging out every evening. Cooking was one of the main ways that we expressed our affection.

I’ve been in enough relationships to know the many ways two people can be food-incompatible: one person drinks way more or less than another; one person is gluten-free or vegan, while the other isn’t; one person is, inconceivably, not a sweet tooth. But Georgina and I have excellent culinary chemistry. And, now in addition to simply feeding myself, I had an audience, a culinary muse, someone to cook for and with. Before eating, we would snap a picture to file into our shared folder that grew to contain hundreds of photos of pizza, salads, burgers, soups, pancakes, bacon-wrapped scallops. Over time, I stopped offering preemptive disclaimers or apologies before I cooked for Georgina. “I’m not sure how this will turn out…” “I hope this is edible!” “Promise you won’t sue me if you get sick from this?” Progress.

As spring turned into summer, a new food season arrived; it was time to slowly, cautiously, return to ordering takeout. While I still avoided eating indoors (and I’m somewhat baffled by people who do), I started returning to some of my old staples: Haruki East in Wayland Square; Tallulah’s Taqueria on Ives Street; Kabob and Curry on Thayer Street; Wildflour Bakery in Pawtucket; Don Jose Tequilas on Atwells Avenue. I also became a devotee of the pop-up croissant wizard, Butterbang, who takes orders online and serves customers out of the door of his kitchen in Olneyville.

Takeout, which felt as natural as breathing to me before the pandemic, had like so many things changed during the pandemic. On one hand, it felt risky to venture back into places I had casually strolled into countless times with my mouth and nostrils blissfully uncovered. One restaurant near me now greeted customers with a hastily constructed tunnel of clear plastic protective sheeting. But, at the same time, spending money at these restaurants now felt like something honorable, a way to help prop up local businesses, perhaps even a kind of civic duty.

But, still, for most meals, I cooked.

Cooking, it turns out, is a perfect pandemic activity. It’s a way to feel accomplished in a world that allows few opportunities, or the mental bandwidth, to get anything done. You can look at a steak or a bowl of pasta or a batch of cookies and say, “I made that.”

Cooking is a means of exploration when you’re stuck in the same place. During my year of COVID cooking, I tried ramen, tacos, schnitzel, paella, quesadillas and various kinds of pasta; I experimented with cumin, paprika, soy sauce and miso, all from the confines of good ol’ 02906. It was a kind of travel without traveling.

Crucially for me, cooking is also a way to drop out of my anxious mind and into my body. It’s hard to be fixated on the horrors happening outside of my apartment when you’ve got, say, a pan of asparagus roasting in the oven and a steak sauce simmering on the cooktop and a pot of pasta boiling. According to a University of California Riverside psychology professor quoted in a recent Guardian article, “flow state” is the name for this feeling you get when you’re doing an activity that is completely captivating of your attention. This isn’t to say cooking was entirely escapist for me. Since loss of smell and taste were the notorious first symptoms of a COVID infection, cooking also became a new method for my constant hypochondriacal self-monitoring. Innovation!

Cooking also opened up new continents of conversations with friends and loved ones. As a journalist, I live to talk to people, and everyone has something to say about food. What we say about cooking reveals something about our tastes, backgrounds, geography, our ethnic and religious upbringing. So cooking turned into a rich subject for quarantine Zoom sessions and phone calls, a way for me to learn new things about the people I know best.

Cooking was also a way of uncovering old memories. One of the dishes I remember most fondly from growing up was the challah French toast made by my mother on Sunday mornings using bread from the bygone Kaplan’s bakery on Hope Street. So one Sunday morning, with help from an online recipe from Ina Garten, I made my own challah French toast. There was something special about that.

This is another benefit of pandemic cooking: It offers something to look forward to. When serotonin is in short supply, cooking can give you something to get excited about during the day: the satisfying knowledge that steaks are marinating or cookie dough is sitting, collecting more flavor with each minute. On a more basic level, cooking is simply something to do. It requires planning, shopping, prepping, cooking, eating, cleaning and dishwashing. During normal times, this can be a hassle; in a pandemic, it can be a gift.

As time wore on, and my confidence grew, and I started to resume limited, fully masked and mostly outdoor contact with others, cooking also turned into a new means for connection. Delivering a hunk of banana-zucchini bread wrapped in aluminum foil or a bag of cookies or a Tupperware container filled with macaroni and cheese was a way to let people know I was thinking about them. Fifteen years after the fact, I recalled something a college literature professor stated matter-of-factly during a lecture: “Food is love.”

I don’t want to give the impression that everything went smoothly. With the amount of time I spent in the kitchen, and with my lack of experience, there were bound to be mishaps. And there were.

Like the time I didn’t notice a rubber band that had held together a bunch of asparagus got stuck to the bottom of a sheet pan until the pork chops I was roasting on it started to smell like burning rubber. This sent me into a frenzy of Googling combinations of “pork chops,” “rubber,” “oven,” “OK to eat?” and poring over online discussion forums. I ate the pork chops, and I lived.