Encore: The Must-See Performances and Shows in Rhode Island This Season

Pull up your calendar: You won't want to miss these visual and performing arts shows. 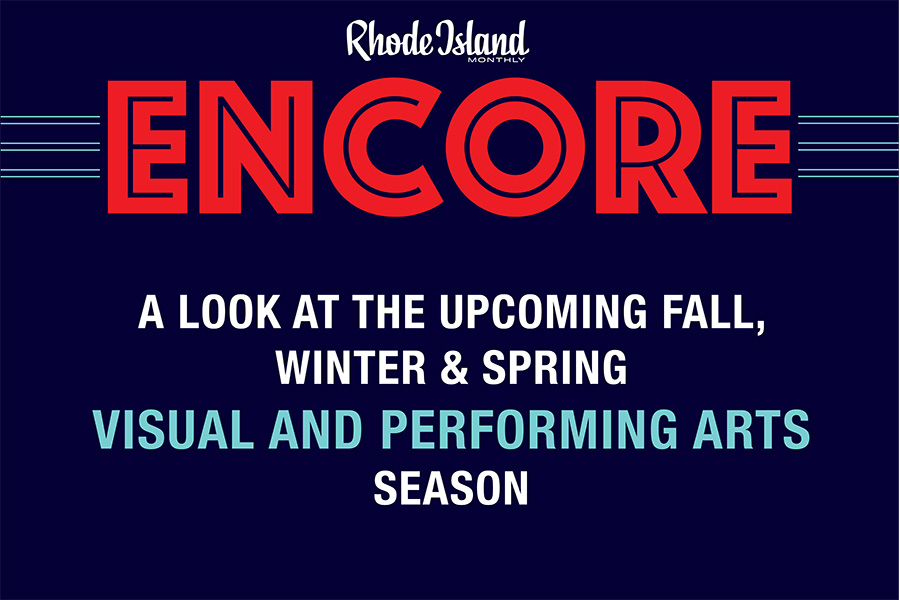 October 1–11
“The Beads that Bought Manhattan: The United Nations Declaration on the Rights of Indigenous Peoples”
Artist Hartman Deetz (Mashpee Wampanoag) and Indigenous human rights lawyer Michelle Cook (Dine’) debut their project on the UN Declaration on the Rights of Indigenous Peoples (UNDRIP). Deetz has produced an elaborate wampum belt that documents UNDRIP, presented alongside a short film on the history of wampum. See website for times.
Cohen Gallery at the Granoff Center, Providence, arts.brown.edu

October 14–16 at 7:30 p.m., October 17 and 24 at 2 p.m.
Silent Sky by Lauren Gunderson
When Henrietta Leavitt begins work at the Harvard Observatory in the early 1900s, she isn’t allowed to touch a telescope or express an original idea. Instead, she joins a group of women “computers,” charting the stars for a renowned astronomer who has no time for women’s probing theories. As Henrietta attempts to measure the light and distance of stars, she must also take measure of her life on Earth. This true story of a 19th-century astronomer explores a woman’s place in society during a time when women’s ideas were dismissed until men claimed credit for them. URI Fine Arts Center J-Studio, 105 Upper College Rd., Kingston, web.uri.edu/theatre

October 1–15
“Shade Garden: New Paintings” by Leigh Tarentino
Leigh Tarentino is a skilled and versatile artist, making paintings, works on paper, photo-based prints and installations as she seeks a new perspective on landscape painting traditions. The result is a synthesis of mediums in which the ordinary is altered into fantasy. 3 p.m.
URI Fine Arts Center Main Gallery, Kingston, web.uri.edu/art/galleries

October 1 thru December 18
“Defying the Shadow”
Defying the Shadow presents images by Black artists and of Black figures that resist the consumptive impulses of looking. Beginning with Sojourner Truth’s abolitionist portraits stamped with the slogan “I Sell the Shadow to Support the Substance,” these assembled works—ranging from 19th-century photographs to contemporary prints—focus on the appearance of shadows in formal and metaphorical settings.
RISD Museum, Providence, risdmuseum.org

October 1 thru March 13
“Any distance between us”
This exhibition explores the power and significance of intimate relationships in works of contemporary art, particularly those made by twenty-five artists identified as Queer and of color. The exhibition features more than thirty objects—including several new acquisitions from the RISD Museum’s permanent collection—by artists such as Louis Fratino, Aaron Gilbert, Doron Langberg, Deana Lawson, Catherine Opie, Jack Pierson, Elle Pérez and Salman Toor.
RISD Museum, Providence, risdmuseum.org

October 1–24
A Lie Agreed Upon
(A new version of Henrik Ibsen’s An Enemy of the People, adapted and directed by Tony Estrella.) The future is looking bright in Springfield! A new hot springs spa is about to open and the economy is booming in anticipation of the tourist season…until the spa’s chief medical officer discovers the springs are toxic. Morality meets self-interest and minority rights battle majority rule in this powerful new play. See website for times.
The Gamm Theatre, Warwick, gammtheatre.org

October 2
Sara Evans — A Special Acoustic Trio Performance
Multi-platinum entertainer Sara Evans is at the top of her game and returning to the Stadium. Her No. 1 singles include “No Place That Far,” “Suds in The Bucket,” “A Real Fine Place To Start,” “Born to Fly” and “A Little Bit Stronger.” Don’t miss this very special acoustic trio performance. 8 p.m.
Stadium Theatre Performing Arts Centre and Conservancy, Woonsocket, stadiumtheatre.com

October 4–31
“Spirits, Spirituality, Supernatural and Steampunk”
From the sacred to the profane in all media by thirty-five area artists. Gallery hours are Monday through Thursday from 9 a.m. to 9 p.m. and Friday from 9 a.m. to 5 p.m. Gallery Night will take place on October 21 from 5 to 9 p.m.
URI Feinstein Providence Campus first and second floor lobby gallery, Providence, uri.edu/ceps/prov/arts

Q&A: Amanda Ronchi, General Manager of the Greenwich Odeum
What were the first few performances or films the Greenwich Odeum showcased when it opened in 1994? When the theater reopened as the Greenwich Odeum in the fall of 1994, its focus shifted from films to serving as a performing arts venue. It offered a home to the Academy Players (a local theater troupe), offered theater classes and staged several performances. Love Letters took to the stage as the Odeum’s first offering, featuring two stars from NBC’s “Another World.”
A Patsy Cline tribute, the Warwick Symphony Orchestra, the British rock band Pendragon and a performance by Chicago’s Second City comedy troupe were some of the first things to fill the theater’s calendar during their inaugural year.
Besides films and concerts, what else does the venue showcase? The Odeum tries to provide a variety of programming outside of music and film. We offer many top-name comedians throughout the year and run a children’s theater camp each summer. Several times we’ve taken the simple idea of showing a film and turned it into an event by having the director or cast appear for a Q-and-A, such as in the case of the film Craft (a documentary on Rhode Island’s burgeoning craft beer industry), where we hosted a tasting with several of the local breweries in conjunction with the screening. Additionally, the theater is available for groups to rent, so from time to time you may find a fundraiser or corporate event taking place in our auditorium. Greenwich Odeum, East Greenwich, greenwichodeum.com

October 14
The Catalyst Quartet
Hailed by The New York Times at its Carnegie Hall debut as “invariably energetic and finely burnished… playing with earthy vigor,” the Grammy Award-winning Catalyst Quartet believes in the unity that can be achieved through music and imagine their programs and projects with this in mind, redefining and reimagining the classical music experience. 7:30 p.m.
McVinney Auditorium, Providence, ricmc.org

October 15–17
Mamma Mia!
ABBA’s hits tell the hilarious story of a young woman’s search for her birth father. On the eve of her wedding, her quest brings three men from her mother’s past back to the island they last visited twenty years ago. A mother, a daughter, three possible dads and a trip down the aisle you’ll never forget! See website for times.
Stadium Theatre Performing Arts Centre and Conservatory, Woonsocket, stadiumtheatre.com

October 16–17
15th Annual HopArts Studio Trail
Twenty local artists in rural southern Rhode Island invite you into their studios to explore their various media and inspiration for their visual creations. This is a free event with opportunities to purchase original works directly from the artist.10 a.m.–4 p.m.
Hopkinton and Richmond, hoparts.org

October 20
Chasing Childhood: Film Screening and Panel Discussion
As the world reopens and we begin to enter post-pandemic life, we have an unprecedented opportunity to ask ourselves: What do we most want for our kids? Chasing Childhood examines what children
and teens really need to be well, healthy and joyful. Join BAI for a screening followed by a panel discussion featuring the directors. Registration required.
Martinos Auditorium at the Granoff Center for the Creative Arts, Providence, arts.brown.edu

October 21 thru November 14
LIFTED by Charlie Thurston
A modern meditation on the Icarus tale, LIFTED is part gritty family drama, part imaginative theatrical fantasia. In a dystopian near-future, birds have returned from their recent extinction to carry a teenage boy off into the sky, leaving his twin brother, father and girlfriend to search for meaning in his disappearance. 7:30 p.m.
The Wilbury Theatre Group at the WaterFire Arts Center, Providence, thewilburygroup.org

October 21
Piff the Magic Dragon
Since breaking out on “America’s Got Talent” in 2015, Piff the Magic Dragon has won the heart of America through his Vegas residency, network television appearances and non-stop touring. 8 p.m.
Greenwich Odeum, East Greenwich, greenwichodeum.com

October 22
The Vampire Circus
An innovative and surreal fusion of cirque, theatre, comedy and cabaret, the Vampire Circus features off-the-wall characters and death-defying acrobats from all over the globe. Incredible acts of strength, balance and electrifying special effects will have you on the edge of your seat! 8 p.m.
Stadium Theatre Performing Arts Centre and Conservatory, Woonsocket, stadiumtheatre.com

October 28
The Peculiar Patriot
Inspired by her decades-long work with prison populations, including on the notorious Rikers Island, Liza Jessie Peterson’s timely and urgent one-person show unpacks the human impact of mass incarceration in America. Join BAI for a performance of The Peculiar Patriot followed by a talkback with Liza Jessie Peterson. Registration required. This program is presented in conjunction with a screening of Aggie on Ocober 27 followed by a panel discussion with Catherine Gund and Liza Jessie Peterson about art, activism and the prison industrial complex.
Fishman Studio at the Granoff Center for the Creative Arts, Providence, arts.brown.edu