Efficiency Meets Style in This Net-Zero Home in Jamestown

Architect Donald Powers comes full-circle with the completion of a net-zero bungalow he designed for his own family.

Nestled in a quiet neighborhood in Jamestown among other traditional bungalows sits this lovely, unpresumptuous house. Its sharp facade combined with thoughtful landscape design offer an inviting picture from the street. Inside, the finishings are tasteful, comfortable and — like the exterior — well suited to its location. This place feels homey, unfussy. It feels like Jamestown. While the architecture and interior are just the right degree of simple, the story behind this house is far from it. 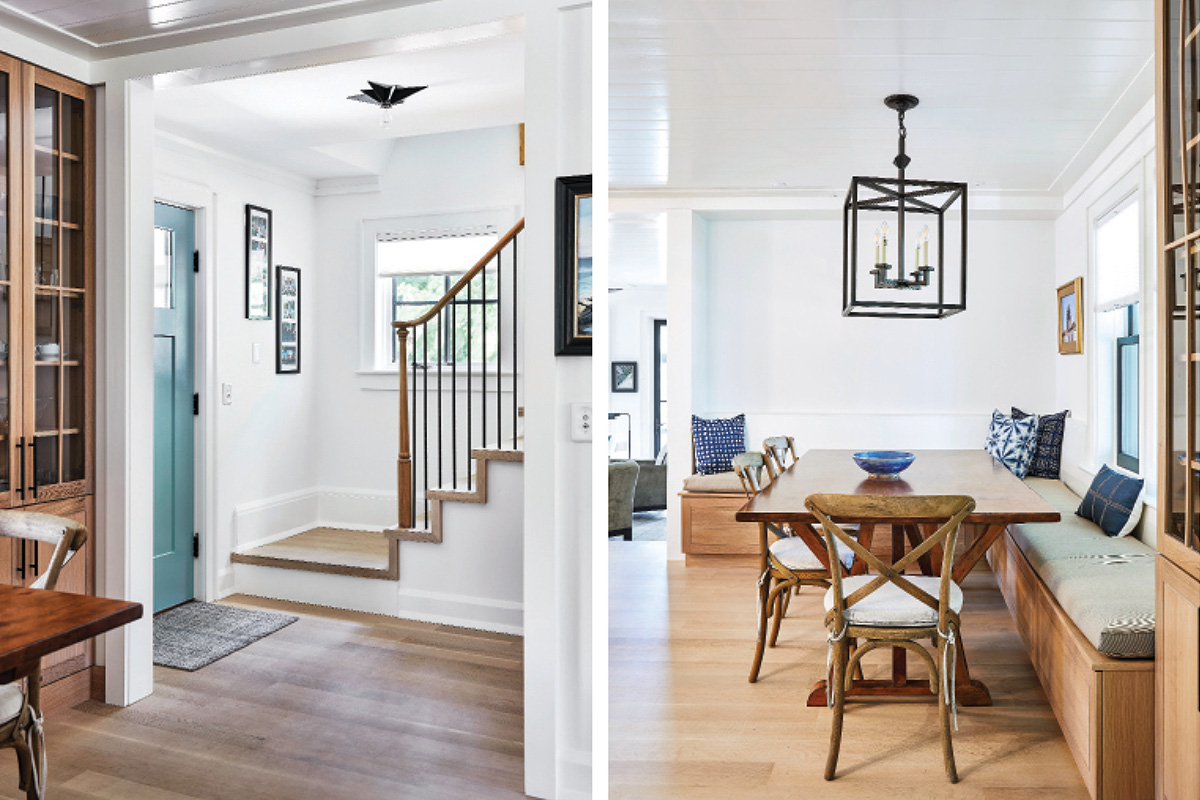 The location of the stairs was the only thing that remained the same in the original part of the house after the renovation of this Jamestown bungalow. Right: Casual, family-style benches make hosting large gatherings a breeze. Photography by Joe St. Pierre.

Balancing preservation and progress can be tricky business, particularly in highly desirable coastal communities richer in historical charm than new buildable lots. In 2007, the town of Jamestown solicited a team of design and planning experts to help it visualize what that balance could look like in the island’s Village district over the next twenty years. Union Studio Architects founding principal Donald Powers, who led that team, says the town was also looking to stem the tide of teardowns that had been occurring on the island. It’s no secret that when outdated structures on prime real estate come under new ownership, the temptation to start from scratch is great; the results, however, are not always so great. The inherent character that draws people to places like Jamestown dissipates when behemoths replace cottages and individual design overshadows community aesthetics. 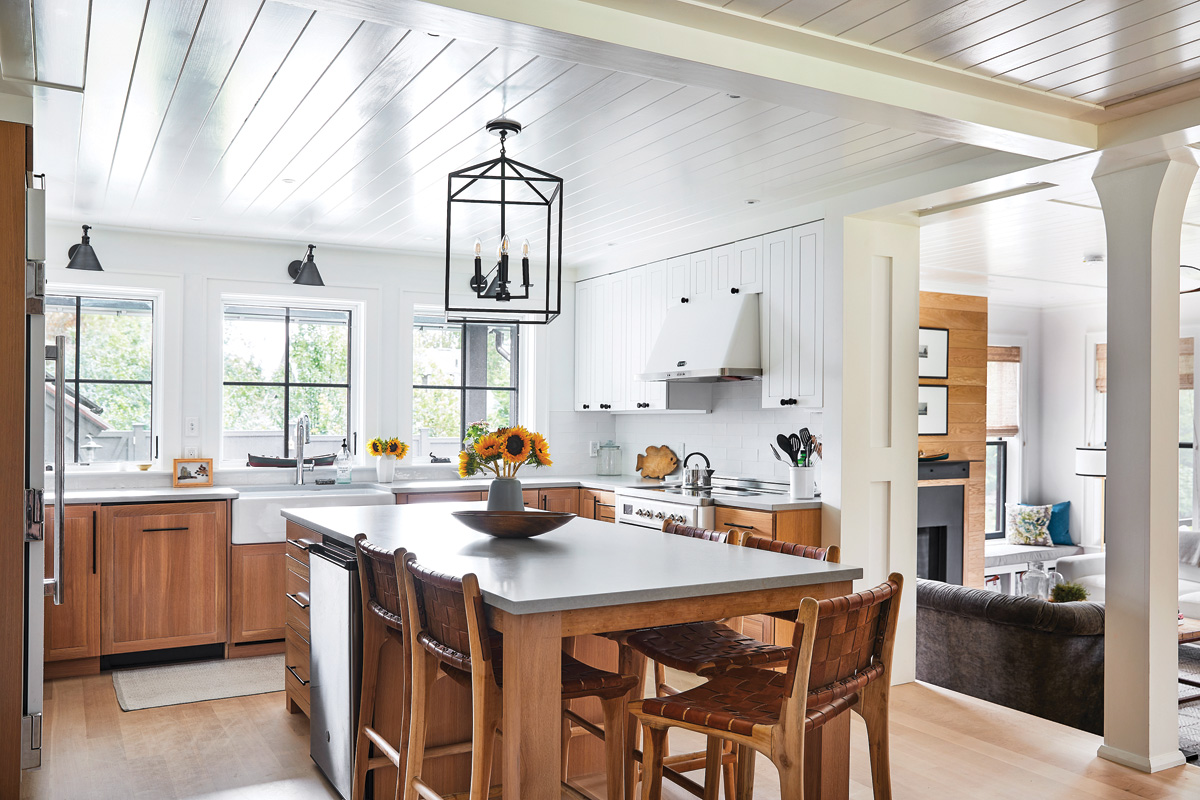 Powers says the town and the team were trying to encourage people to add onto their houses instead of demolishing them. To accomplish that end, Powers says, “We wrote a set of design guidelines to help homeowners understand how they could either build new or expand their existing houses without changing the scale of the neighborhood.”

In addition to making recommendations on how to maintain the district’s character and scale, the team also offered suggestions on how to support sustainable building practices across the island.

The charrette wasn’t the extent of Powers’ investment in Jamestown at that time. That same year — after four or five years of renting on the island — he and his wife, Dana, purchased a home in the Village district with her parents and brother. The three families spent the next year renovating the home inside and out, turning it into a shared summer retreat where grandparents, siblings and cousins could reconnect and relax. 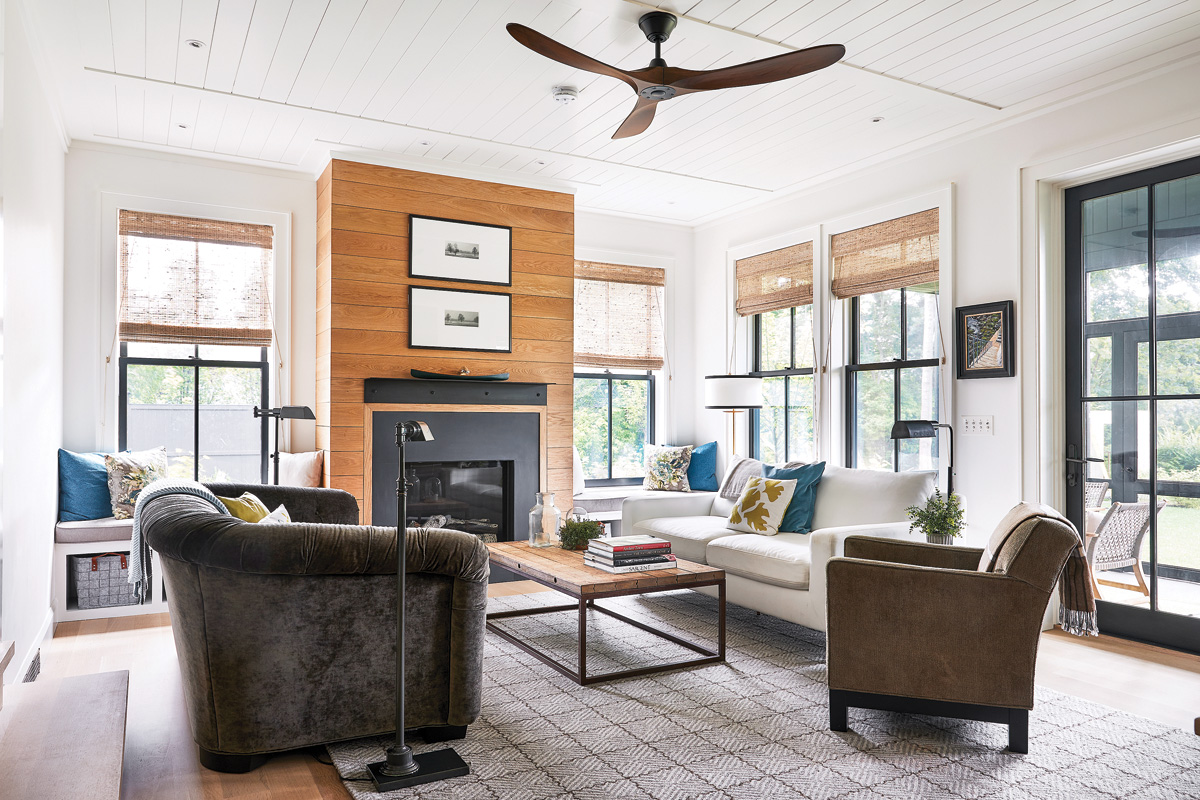 All of the exposed woodwork in the house, including the detail on the fireplace wall, is quarter-sawn white oak, although the finishes vary from glossy to bleached to matte. Photography by Joe St. Pierre.

For a few years the arrangement worked; but eventually, Don and Dana, whose full-time residence was on Providence’s East Side, were thinking regularly — and rather longingly — about the East Bay. The couple and their two boys loved Jamestown, so why were they limiting their island time to one season a year? The Powers made the plunge: They moved into the shared vacation home and started looking for a property nearby to establish their own year-round nest.

“We knew we wanted to stay close to the homestead, so to speak, which made it difficult,” Don says. “We had such a great thing going with all of the kids being able to spend summers with the grandparents and we wanted to preserve that.” But there’s close, and then there’s close. 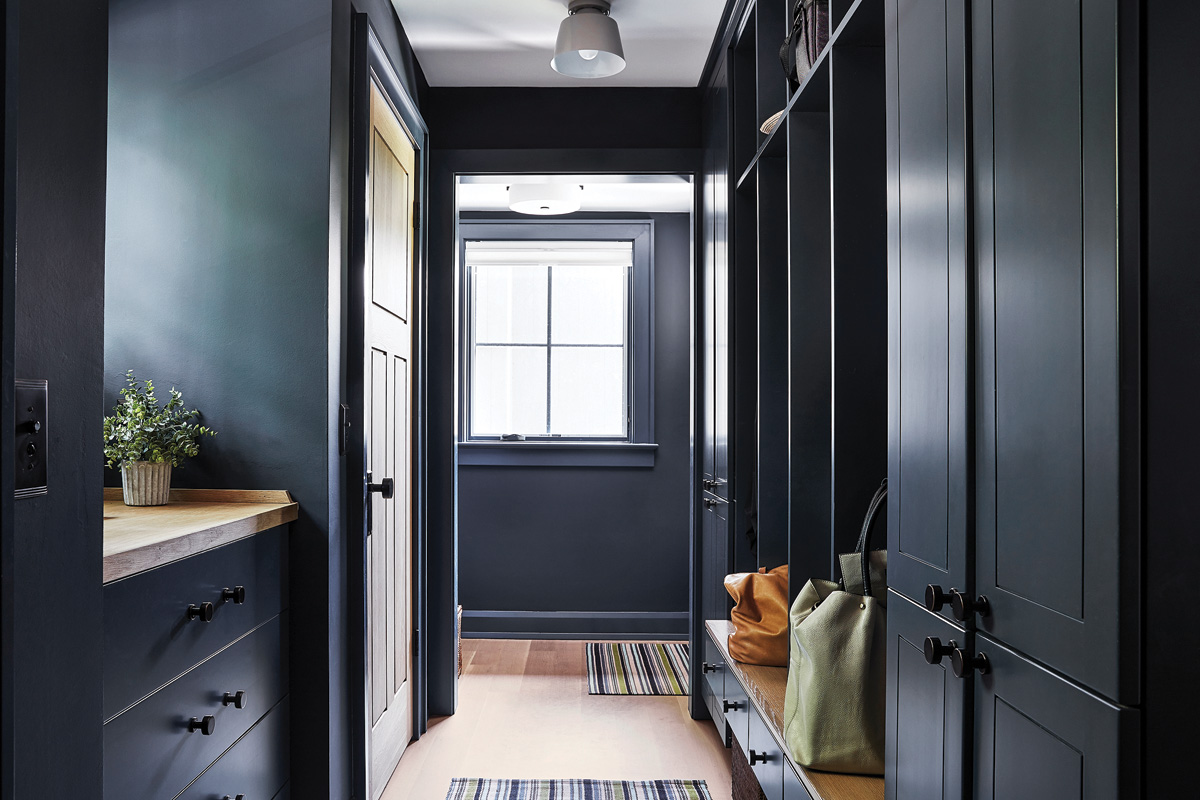 The mudroom off the kitchen features ample storage, a powder room and a pantry. “Every family loves a dropzone,” says Dana. The color, Hale Navy by Benjamin Moore, is a nice contrast to the light natural wood throughout the house. Photography by Joe St. Pierre.

“We were looking for something within a one-block radius,” says Dana.

The inventory may have been small, but their determination was steadfast. “We ended up putting notes in everyone’s mailboxes to see if anyone wanted to sell, and we got lucky,” Donald says.

The Powers got lucky with a 100-year-old, 1,000-square-foot bungalow complete with haphazard sheathing and aqua asbestos shingles: It was perfect. 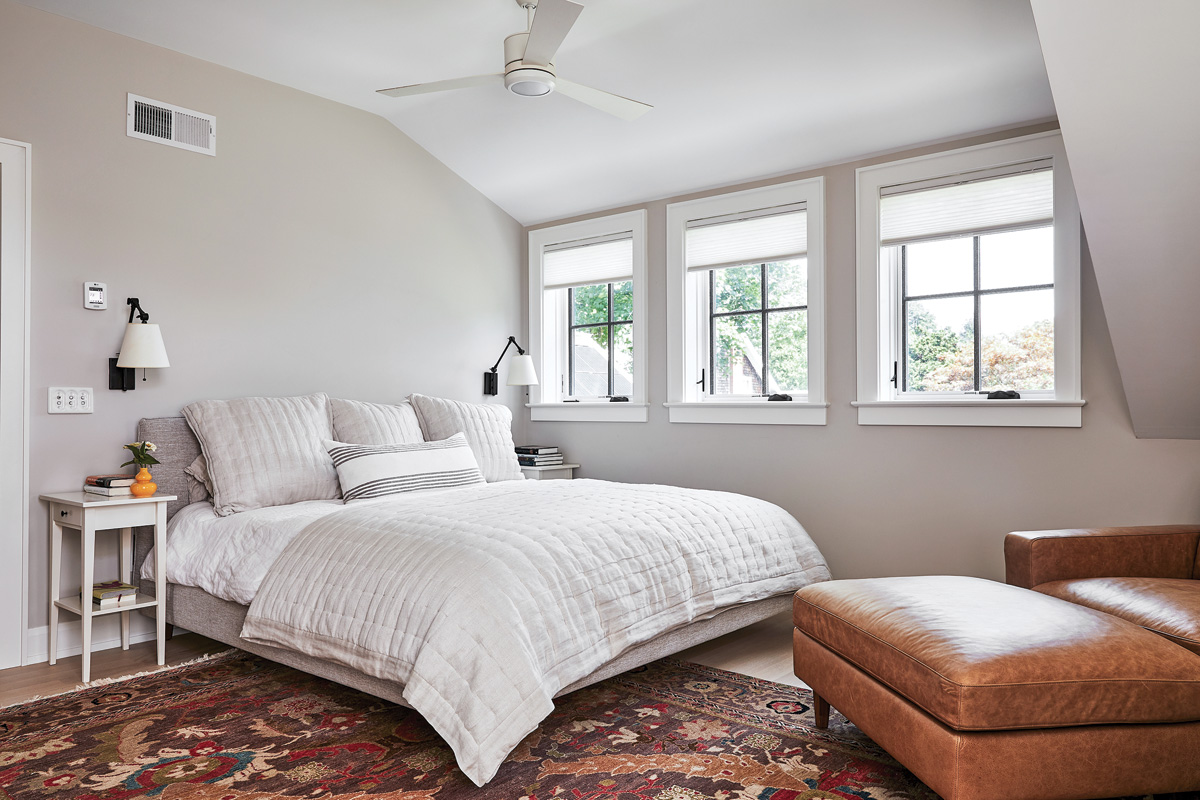 “We’re kind of serial renovators,” says Dana. All told, the Powers renovated three homes before they bought this one. “We were looking for an extensive renovation because we wanted it to feel like ours; that’s what we do.”

As Don and Dana began to conceptualize a plan, another idea took shape: The house was positioned along the hard northern edge of an unusually large 13,000-square-foot lot, conditions that made a net-zero rehabilitation possible.
As a firm, Union Studio has done numerous net-zero projects including whole neighborhoods in Concord and Devons, Massachusetts, although, says Don, “We call them ‘net-zero possible’ because, really, if the homeowner doesn’t participate, no house is net-zero.”

So, while this wouldn’t be his “first rodeo,” the house’s age made the project challenging and it would also be the first net-zero residence that Don had designed for himself.

“To be able to do that for ourselves and feel like we were walking the walk was important,” says Dana. And for Don, this was his opportunity to bring that action plan he had developed years earlier to fruition.

Sustainability was an objective, but preserving the look and feel of the neighborhood was equally important (recall that tricky preservation-meets-progress business discussed earlier). 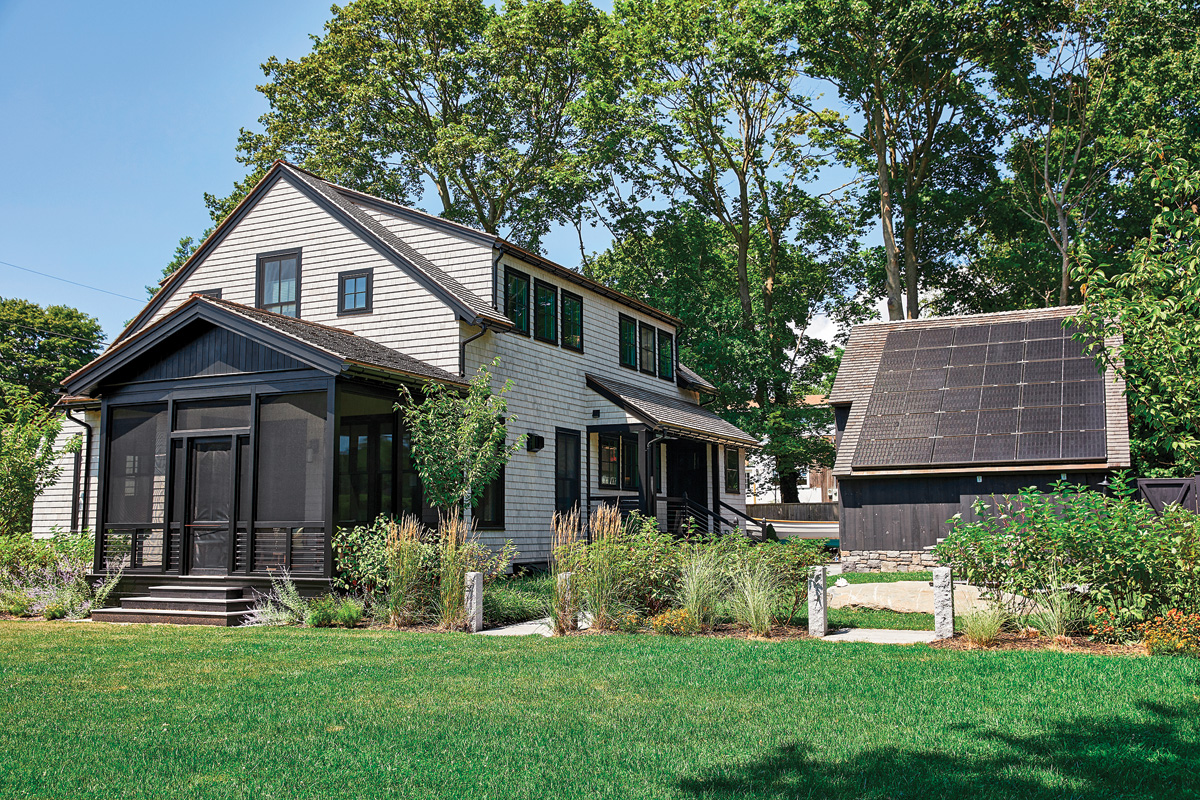 The landscape plan, designed by Tom Ryan of Ryan Associates, is a perfect complement to the house. Stone walkways connect various spaces and stone columns mark the thresholds between those spaces. Landscape Creations did the installation. “I cannot tell you the amount of pleasure it gives me walking around that yard,” says Don. Photography by Joe St. Pierre.

“I wanted to prove to people that a net-zero house didn’t have to look like a net-zero house. People picture this weird, modern-looking thing with solar panels all over the roof, and I have always thought there was a certain level of the market that likes that whole techie side of building, but there’s a much bigger part of the market that would do high-tech stuff if it didn’t have to look high-tech,” he says. “Another objective was to take a very cottage-scale bungalow, double it in size, and have it still be a cottage-scale bungalow. We wanted to show that you can make a relatively large house and keep the whole thing very much in the historical pattern of the neighborhood.”

Coincidentally, this was about the time that Jeff Sweenor of Sweenor Builders called, which made the big picture a bit more interesting. Sweenor Builders had collaborated with Union Studio on a previous “This Old House” project in Narragansett. Jeff was looking for a new renovation project to bring to “This Old House,” and he was wondering what Don had on the boards.

“As a firm, we generally don’t do a lot of renovations, so the only thing that we had was our own house,” says Dana. This project, while slightly atypical for the “This Old House” brand due to the extent of the planned rehab, still posed an opportunity for all parties to demonstrate the value of restoration over demolition. It was game on. 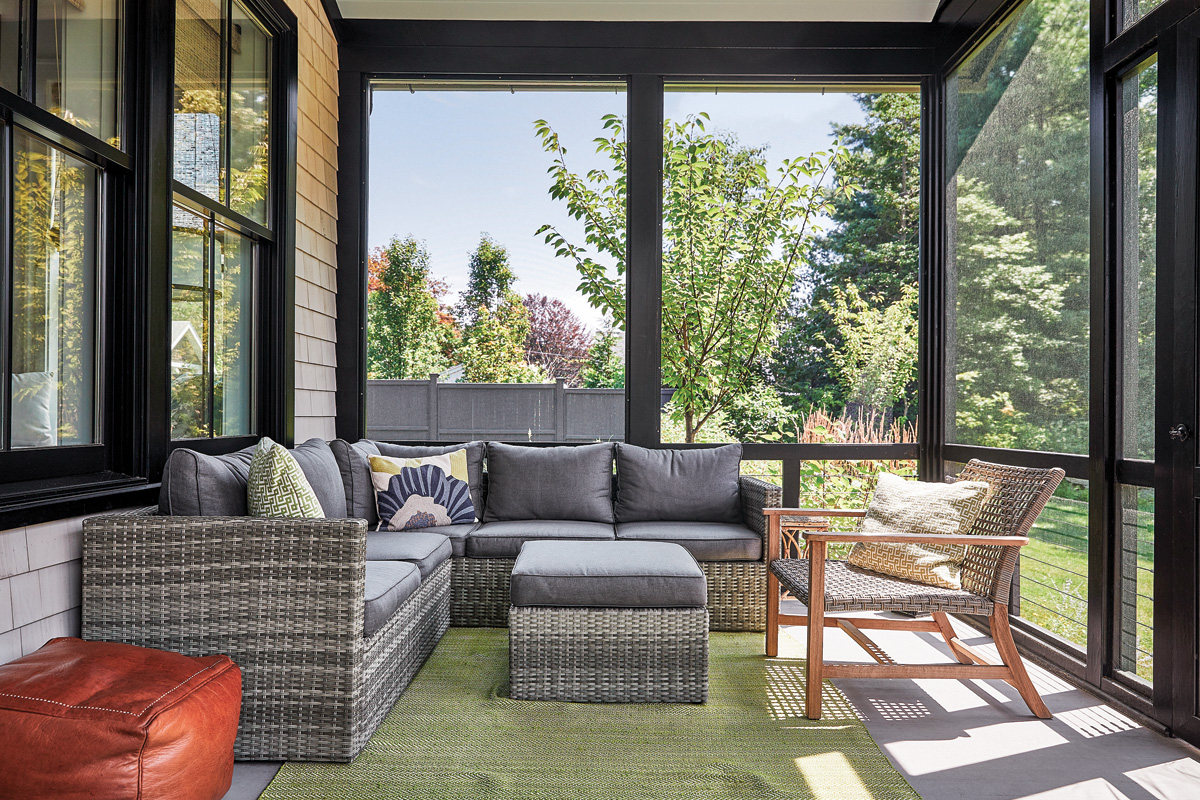 The screen porch, says Dana, is “just perfect for morning coffee.” Its location also allows Don and Dana to keep an eye on the kids (without hovering) while they play in the side yard. Photography by Joe St. Pierre.

After about eight months of construction, the Powers had their new old house. While the home was virtually unrecognizable from what it had been, the original volume remained. The interior was reconfigured and an addition (a basement plus two floors) was added to its south side. Still, it looked to scale: It was a traditional Jamestown-style bungalow, albeit an extremely efficient and astutely designed one. Don’s design even draws inspiration from another house on the island: the 1889 Governor Francis Cottage in Shoreby Hill. Don says the columns on his front porch reference the rambling, shingle-style, quasi-mansion’s own swooping columns. The reference, he says, is intended as both homage and humor.

“To take those columns and quote them, if you will, on a tiny little bungalow was a way of saying this is architecture, too,” he says. “It’s not just the big houses in Shoreby that are architecture with a capital A. Even a little house can be every bit as formal and intentional as that.”

In truth, every detail is intentional. Outside, the blond shingles allow the black trim to pop, and the black fence and newly constructed barn make the whole property cohesive. The barn, which features
a steeply sloped south-facing roof, was essential to achieving net-zero status: an array of photovoltaic panels are embedded in its cedar roof. The black stain on the barn makes the panels blend into the overall aesthetic. The panels are visible, although they don’t stand out.

But, says Don, solar panels alone don’t make a house net-zero. “Building a net-zero house is always this balance of reducing as far as possible the energy load that the house draws while at the same time maximizing the amount of solar energy you can produce.”

On the conservation side, the house is super insulated and air-sealed using a new technology called AeroBarrier. “You pressurize the house and then you release this airborne acrylic into the house and wherever the air is leaking out, it builds up and it seals the leak,” he says. Triple-glazed windows and a state-of-the-art mechanical system were also essential to achieving the efficiency levels Don wanted.

As important as efficiency was, this was designed to be a family home. The front door spills into the kitchen, where a sizable island provides room to work and gather; built-in benches create ample seating in the dining space. Off the kitchen are two steps that lead into a spacious living room, which lies within the addition. In the corner of this room is a music nook designed specifically for fourteen-year-old Nate, a talented musician, and his piano. Off the living room is a cozy den and the screened porch, Don and Dana’s favorite space.

“We’ve been out there so far into the season that you absolutely can’t sit out there without hypothermia,” he says. “We’re all bundled up in these big fur blankets because that’s the best place in the house.”

Both the bedrooms and the laundry room are located on the second floor of the house. Nate and his brother, eight-year-old Theo, have bedrooms in the original part of the house, while the master suite is located over the living room in the addition.

“I like this house and I’m proud of this house,” says Don. “As an architect, it’s taken me a lot of time to get to the point where I have enough confidence to be simple where it needs to be simple. It’s harder than it seems.”