In the name of fancy cupcakes, a Federal-style building in Fox Point was razed to rubble. It doesn’t have to be this way. 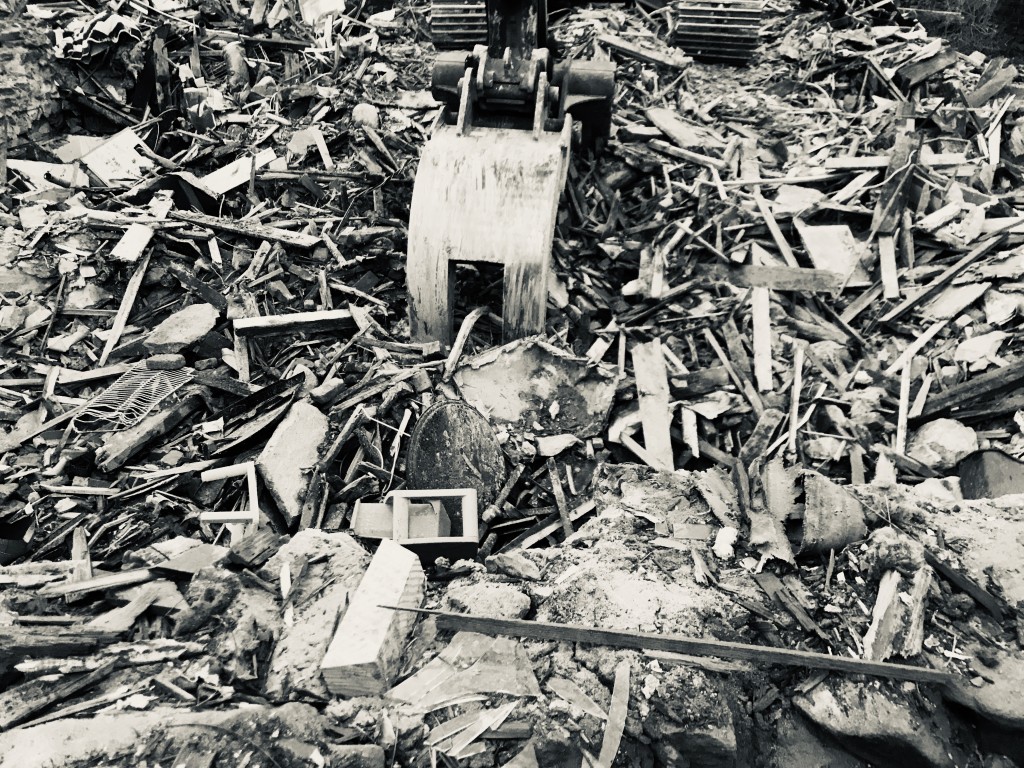 The aftermath. The owner of Duck and Bunny demolished its historic home in Providence with plans to rebuild the restaurant for a 2022 re-opening. (Photo credit: Scott Moran)

In the wake of the Easter weekend demolition of a Federal-style building on Wickenden Street in Providence’s Fox Point neighborhood, public opinion fell into two camps:

I’ll be upfront: I live in the neighborhood, and I loved the Duck and Bunny. It’s where I celebrated friends’ and colleagues’ big life achievements over lunch. It’s where my husband and I would go after a concert or a gallery opening or a show at a local theater (remember those?) to bask in the firelight, local beer and lavender champagne cocktails in-hand. And it’s where, on the cobblestone patio out back, my family hosted my baby shower. We marked the occasion with a photo in front of the building’s salmon pink clapboard.

So when I saw a stretch of that clapboard in a freshly felled pile of rubble earlier this week, I was so sad for my own selfish reasons, to be sure, but also for the obliterated legacy of this old house — a structure built not, as previously reported, in 1900 but likely the late eighteenth century, according to Jim Falcon, who owned the building with his wife and a partner for more than three decades prior to selling it to the Duck and Bunny ownership.

“It’s been such a big part of our family, [we] have cared for it for most of our lives and were reassured that the new owners would continue to preserve it,” Falcon writes in an email Saturday morning.

For many, many years, 312 Wickenden was home to families and artists and students. It served as the headquarters of the State Council of the Arts, hosted a nail salon and a bookstore, housed an Italian restaurant and an all-day breakfast spot with a lending library and art for sale. And now, after nine years of cupcakes and crepes, it is gone.

On Monday, Duck and Bunny owner Dan Becker told WJAR’s Lynzi Dellucia that “the plan was always to demolish and rebuild.” But, back in 2019, during a fundraising push before a closure for renovations, Becker’s former co-owner told Rhode Island Monthly, “We love the neighborhood and that this is an old house. That’s why we’re choosing to stay and renovate, and restore the building’s integrity, rather than move the restaurant to a new location. It’s become an integral part of the Duck’s character.”

It’s a curious thing, to me, that the only old properties we care about are ones with markers by the front door — particularly because, as Robinson points out, National Register designation is largely honorary. Providence has broad National Register coverage, and plaque houses get razed all the time. Robinson adds that the Duck and Bunny building is in PPS’s Gowdey Library of House Histories, so there’s a chance it was awarded one of their white historic markers at some point. Even if it wasn’t, the structure still mattered to a lot of us — including the Fox Point Neighborhood Association and, in turn, the PPS.

“In early 2020, our executive director, Brent Runyon, met with the [Duck and Bunny] owner and inspected the building and we were in the process of trying to encourage him to restore the building,” Robinson, who serves as preservation director, says, adding that a demolition like the Duck and Bunny’s “doesn’t require any public announcement until the wrecking ball comes down the street.” The permit was issued on March 15, per Ward 1 councilman John Gonclaves, and the building was down less than three weeks later. 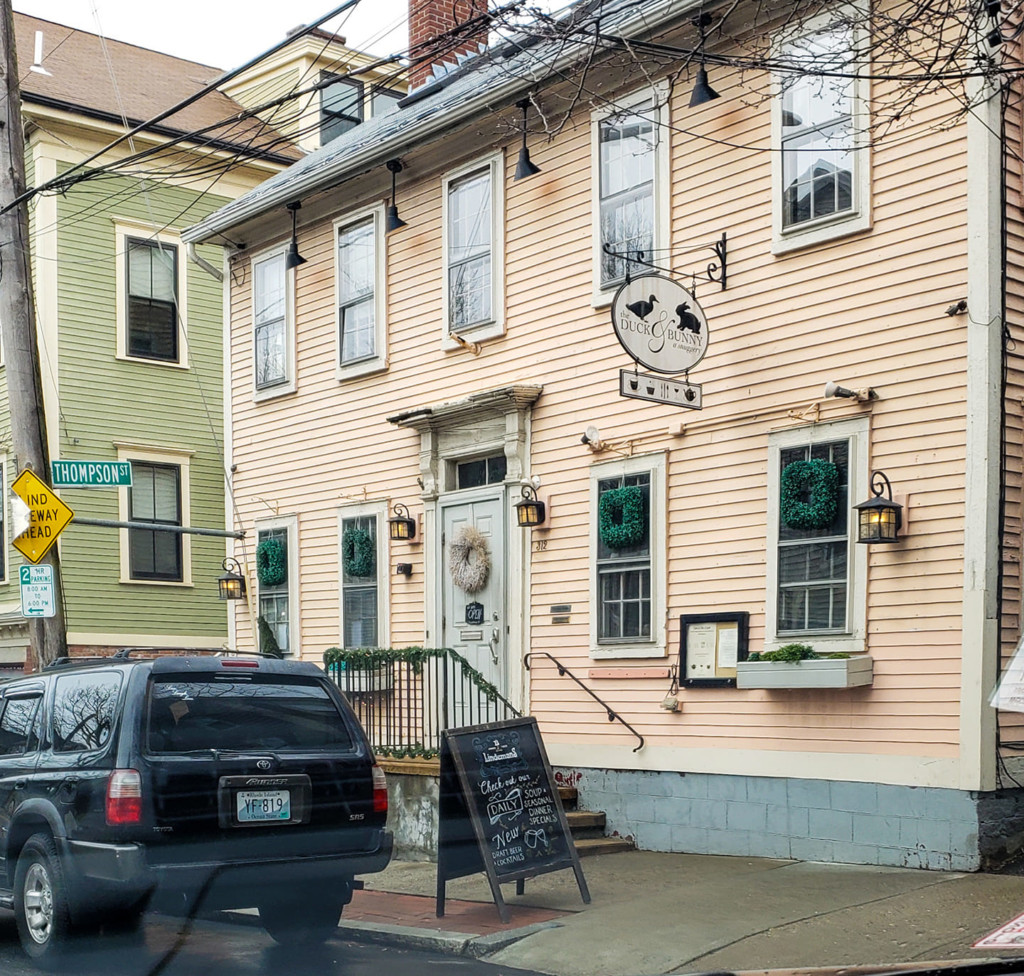 Exterior of the Duck and Bunny in 2019. (Photo credit: Jamie Coelho)

An LHD isn’t the only safeguard for historic structures. In 2014, the city expanded a protective program for commercial buildings, called the Providence Landmarks District, so homeowners in all neighborhoods could also apply for landmark status for their historic residences. This designation gives property owners access to state and federal incentives for rehab projects and it ensures that, when the homes are sold down the line, buyers will need approval for demolition or major renovations.

The Providence Landmarks District program is especially helpful considering how difficult it is to modify Providence’s existing LHD boundaries. Robinson and the PPS have worked for years to expand the College Hill Historic District to include ninety additional structures between Hope and Governor streets, and the Providence City Council is poised to consider the new boundaries in the coming months. Residents called for the expansion following Brown University’s 2012 razing of National Register buildings to make way for student luxury apartments. As the city weighs new College Hill Historic District lines, Brown is preparing to remove additional historic homes and a stretch of commercial property along Brook Street for student housing.

“If and when we survive this effort, certainly I think because of the demolitions and new constructions that have taken place on Wickenden Street and the concerns of neighbors, we should have some discussions with the city about eliciting some [Providence Landmark District designations] to get them added or to think about some protection,” says Robinson.

She adds that some communities have also imposed demolition delays of sixty or ninety days so neighbors have a chance to respond and “not wake up on a Monday morning and realize Duck and Bunny has been torn down,” Robinson says. It’s an option the neighborhood associations in Providence should consider, she says, and the PPS could help them advocate for it.

The Duck and Bunny owner didn’t return Rhode Island Monthly‘s requests for comment, so I don’t know his plans for the future. Maybe he’ll resist the ticky tacky. I sure hope so. For this reason I won’t vow, like others in the neighborhood, never to step foot in the finished establishment. The cupcakes are great, the cocktails even better. Moreover, I don’t need a new place to boycott. Has anybody noticed the glitzy, boxy diamond store and luxury apartments where the aquarium used to be? It’s an unusual thing, this decision to peddle expensive jewels on a commercial strip with an erotica shop, tattoo and piercing parlors, antiques shops and a corner appliance store. I’ve tried to cast rueful glances as I walk by but, in the darkened windows, I’m met with my own sorry reflection. Fitting, isn’t it? I — we — let this happen.

Many of the old homes in Fox Point were, at some point over their lifetimes, in a sad state. But their owners — these guerrilla preservationists, my heroes — decided they were worth saving. Should we wager that all buyers in a bananas real estate market will make the same expensive, time-consuming choices in the name of community character? Because, before long, Robinson says, “One building becomes two becomes twenty, and Wickenden Street looks like a very different place.”