A neutral palette and natural talent make this little gem into a cozy starter house.

House Hunter
In early 2018, Molly Cartier and Joshua Bennett were looking to buy their first house and by late March, they thought they had found it, in Cranston. Then the inspection fell through. 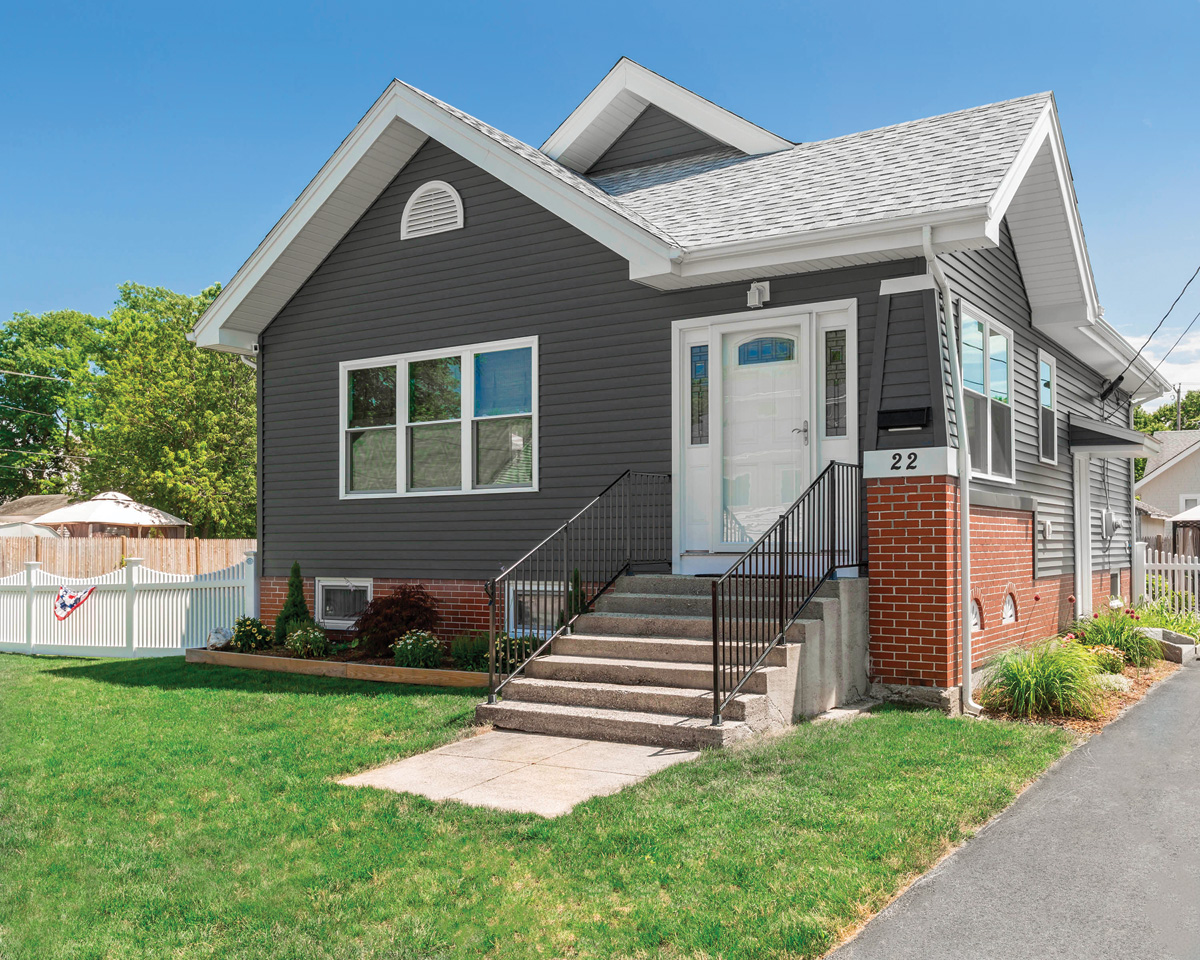 “I had the next day off and I was so aggravated, I drove around like a crazy person looking for something else,” Cartier says. She and Bennett wanted to be near their parents in Warwick, where they had grown up, so that’s where she drove. At some point she found herself outside this tidy little blue bungalow. “There was a truck in the driveway and I pulled in.”

The truck belonged to a contractor who told Cartier that the house, a flip, belonged to his friend, who would be listing it the following day.

“I called our realtor and he contacted the seller. We saw it two days later, and then we were closed in thirty days. It worked out really well,” she says.

Granite countertops and floating hardwood floors were part of the flip, but owners Molly Cartier and Joshua Bennett personalized their Warwick home through their decor. A black and white Moroccan-style rug in the living room anchors the leather armchair and beige sofa. Photography by Sarah Farkas.

Over the next year, Cartier turned the house homey, making it theirs. Although she’s a hair stylist by trade, she has a knack for decorating. “When I was growing up I wanted to get into interior decorating. I was always rearranging my room, was always painting.”

Her aptitude resonates in the details: A mostly neutral palette is grounded by wisps of black and wood accents. Bamboo blinds, tasseled wool and jute rugs, and natural greenery (there are forty-five live houseplants in all) add textural interest.

Personal Favorites
When asked to define her style, Cartier pauses before answering. “Honestly, I have no idea,” she says. “I want to say modern farmhouse, but I feel like that’s not right. I don’t really feel like it’s farmhouse-y.” The overall sentiment is honest and inviting, so labels be damned. 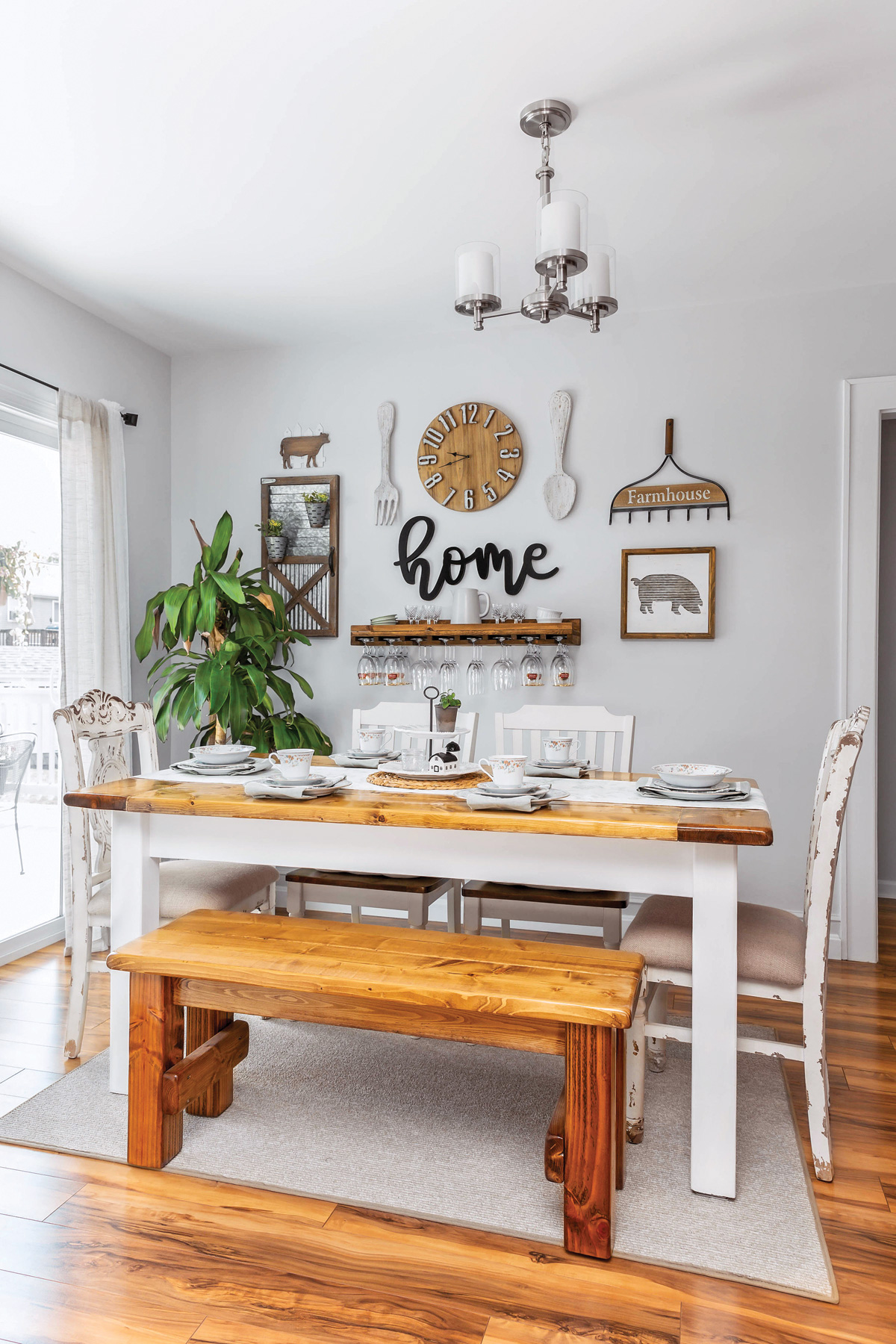 Cartier regularly curates pieces from Hobby Lobby, Michael’s and Joann Fabrics in addition to consignment shops and online sites (“I’m a big clearance hunter,” she says with a laugh). “There are times I’ve brought things into the house that I’ve just picked up because they tie everything together, but I most love the spaces that have a history.”

The dining area is one of Cartier’s favorite spots in part because the table and bench have sentimental value: “Josh’s dad made them. When we sit at it, it just feels different.” Bennett’s father, a woodworker, also made a barn door for the couple’s basement and the top of their entertainment center.

Softer Side
Although the home’s sole bathroom is located downstairs, Cartier and Bennett opted to designate the first floor bedroom a spare and claimed the entire open upstairs as their master. Up here the palette is in step with the rest of the house — simple, natural and mostly neutral — but the inclusion of more blues and some pastels creates a soft, slightly feminine appeal compared to the more minimalist aesthetic downstairs. “I’ll throw in color here and there to give it some character, but I always make sure the color is interchangeable because I get very tired of it,” Cartier says. Floral prints and stripes lend the space classic, cottage-like charm.

Mixed hardware on the bathroom vanity adds a little extra personality in the mostly black and white bathroom; Cartier transformed an awkward space into a cozy reading nook; Boone, the couple’s fifteen-month-old Springer spaniel, is quite at home in the master bedroom. Photography by Sarah Farkas.

While traditional bungalows provide mostly open, second-floor nesting spaces, they also come with slanted ceilings, which generally result in some unconventional nooks and crannies. Such was the case here.

“That area is so awkward,” Cartier says of the closet-like alcove with steeply pitched ceilings off their master bedroom. “I’m five-two and I can just walk in without touching my head to the ceiling. It’s really, really tiny and I didn’t know what to do with it, so I put a little reading nook in there.” She outfitted the space with a large, faux fur bean bag and a handful of throw pillows. To complete the nook, she secured small bunches of faux flowers to the back wall with Command hooks.

Outdoor Entertaining
“Normally if we’re getting together with friends, our house is the place where people come to hang out,” Cartier says. While the flip gave them a mostly open interior that was conducive to hosting, the yard needed work. 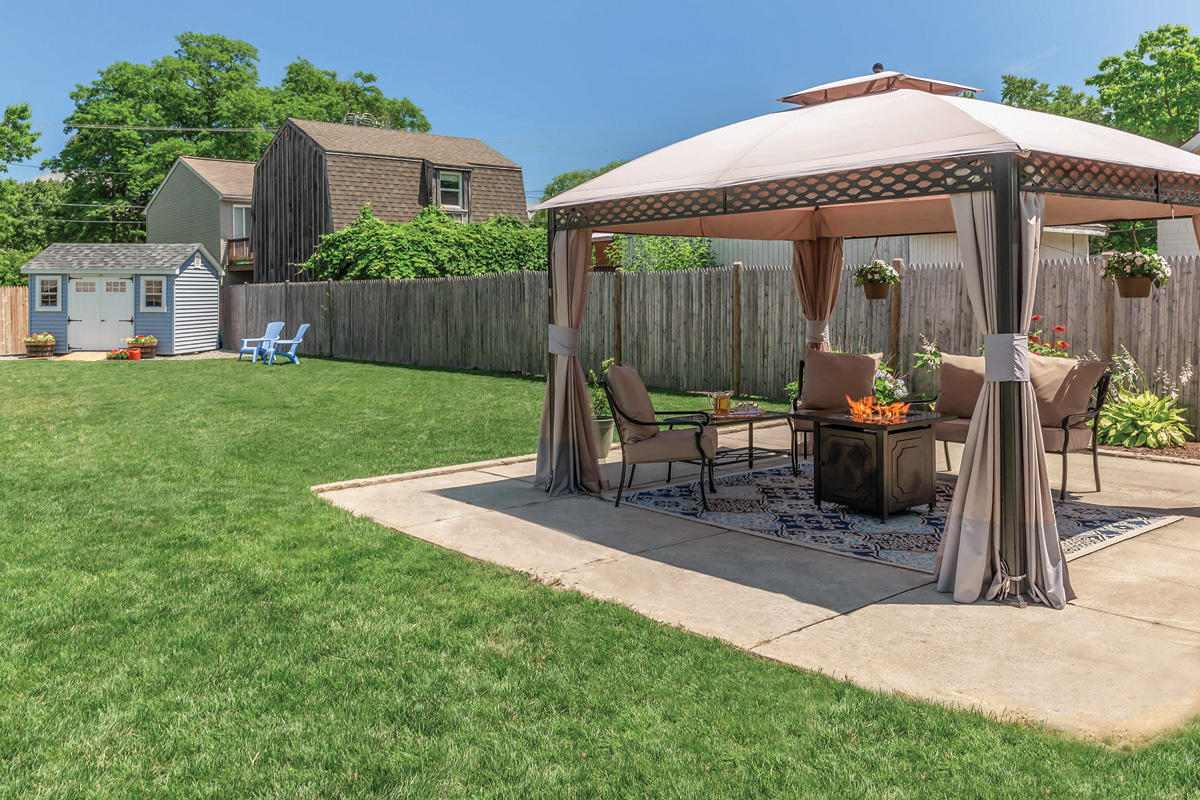 Bennett leveled the backyard and completed the landscaping himself after he and Cartier moved in. hotography by Sarah Farkas.

“The outside had to be leveled,” she says. “We had to rototill the whole backyard; it was dirt for the first summer we were in the house.” Once the backyard was level, Bennett seeded the lawn and installed a garden shed in a back corner. He planted greenery in the back, front and sides of the house. A combination of mulched beds and raised beds along the fences and foundation add texture and color throughout the seasons. A cement slab in the backyard memorialized the location of a long-gone garage. Rather than tearing the slab out, they repurposed it as a patio complete with canopy, lounge chairs and freestanding fire pit. The pair painted the pre-existing deck gray and furnished it with a table to increase their entertaining space. 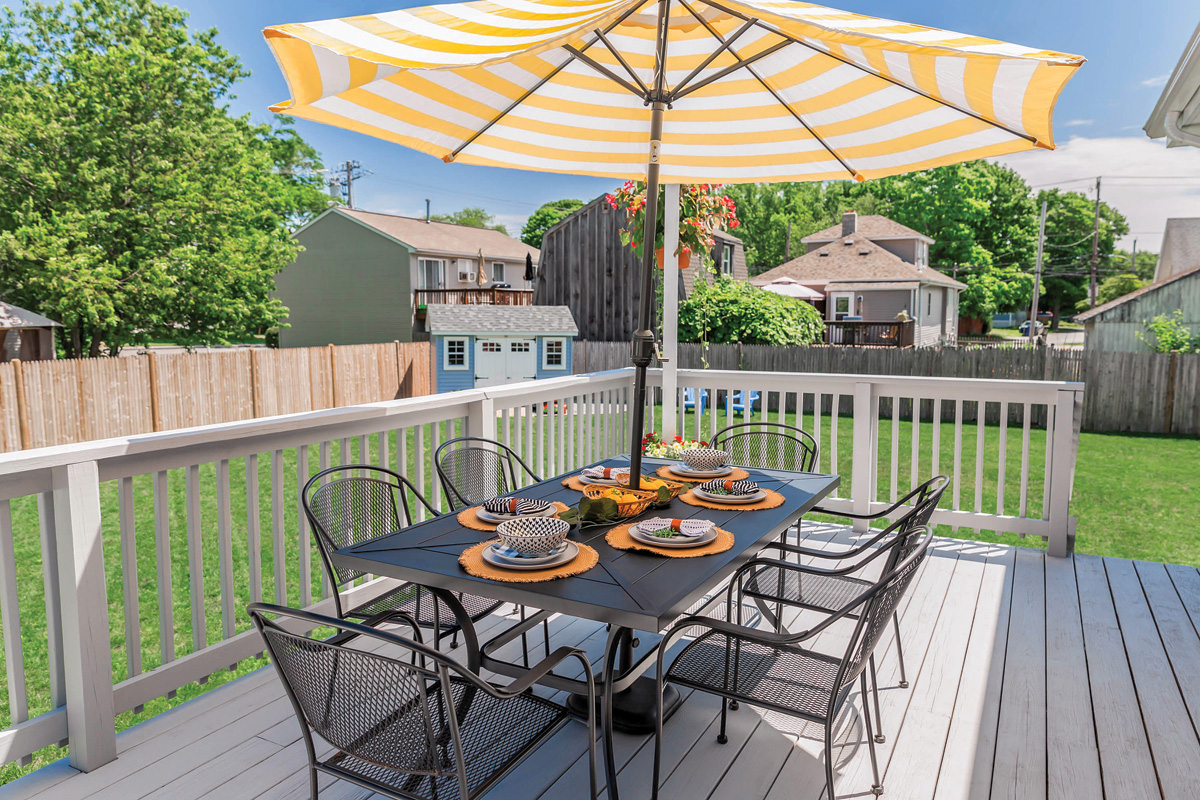 Their first venture into home ownership has been work, but it’s been worth it, says Cartier. “We love it. We really do love it.”