Shop for Anything but Umbrellas at the Fantastic Umbrella Factory

We may never know how it got its name, but this beautiful spot is an intriguing shopper's bazaar.

It’s a sweltering July afternoon when I pull into the dirt lot at the tucked away Fantastic Umbrella Factory in Charlestown. It’s so hot, in fact, that I’m surprised to find a great number of patrons happily milling about rather than staying inside to beat the heat. Up ahead, teenagers trade gossip while getting their hands dyed with henna, children shriek in delight as domesticated chickens peck seed from their outstretched palms and women attempt to safely traverse the winding paths while holding large potted plants.

It’s been awhile since I’ve made a trip down to this “nineteenth-century farmyard shopper’s paradise and international bazaar,” as the factory’s website describes itself, but it certainly lives up to memory. Soon after moving to Rhode Island when I was four years old, a day trip to the mostly outdoor icon is one of my earliest impressions of the Ocean State. It’s hazy with the thrill of picking out my first ever rope sailor’s bracelet and getting lost in the ethereal bamboo forest. My teenaged recollections are peppered with blowing all of my babysitting money on bits and bobs for friends. My job in Providence has kept me away in recent years, so I’ve arrived early in case I can’t remember how to get around. Luckily, the first wooden building I stumble upon ends up being my intended destination. 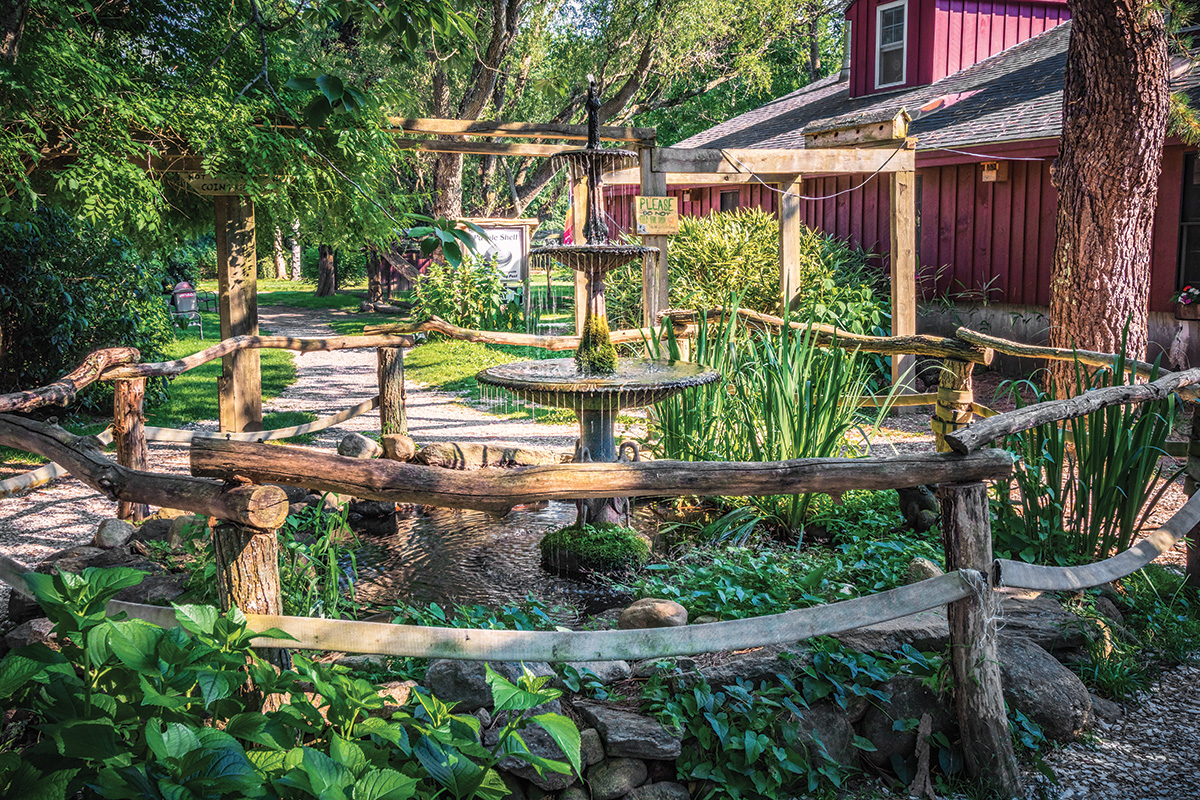 Walking into Small Axe Productions, I detect a faint, pleasant sage scent. A few shoppers have the front counter surrounded, so I take my time. My fingers brush against everything from hand-knit hats and ancient-insects-in-amber necklaces to interesting African sculptures and colorful ceramics. I’m particularly taken with a blue paisley maxi dress when I hear the voices at the front fade, signaling that the till is finally clear. I approach the two men behind the register — who could be brothers with their matching gray beards and glasses — and ask for the owner, David Turano. One of the men gives me a winning smile and I think I’ve found my guy until I see that he’s pointing to his left. His companion is deep in concentration as he writes down numbers in what looks like a sales ledger. I wait a few moments before he puts down his pen, says “I’ll be back in a bit” and then walks towards the front door. His partner nods to me before turning to another customer. I take it as my cue to follow. Turano holds the door open and leads me past the main path towards one of the gardens. On our way, a man with an impressive Stetson greets Turano and says, “Man, you’re a big shot around here — you’re always so busy!” Turano shakes his own beanie-clad head and chuckles. We take a seat on a bench next to a flower bed and he looks at me expectantly.

It makes sense. I am here to interview him, after all.

We begin with the Umbrella Factory’s roots — were umbrellas involved?

“No,” he says with a laugh. “In the mid-sixties, a school teacher from the D.C. area named Robert Bankel saw this dairy farm up here — it had been inactive for years — and decided he was going to get out of teaching and into the retail business. He opened the Umbrella Factory in ’68 and that’s the name he chose.”

Bankel set up shop in the property’s small front building — a former Temperance Hall from the early 1800s — selling penny candy and a few gifts. Eventually, steady business allowed for expansion; they renovated the barn next door, moved in and began selling even more goods and gifts.

“And they had a few different craftsmen working there: a stained-glass worker, a woodworker, a leather-maker… Then, in the early seventies, I started doing pottery and my partner, Peter Doucet, who’s at the register now, did blown glass,” Turano recounts. “We were up there for a while and then we formed a craft cooperative of sorts. We eventually took over the front building and that lasted quite a few years.”

The cooperative dissolved around the mid-eighties, but Turano and Doucet turned it around by establishing Small Axe Productions, their own storefront where they sold their work as well as other wares.

The complex has experienced quite a few changes over the years, the greatest of which was a destructive fire in 1989 that forced the various vendors into a musical chairs-type situation, leading Small Axe to eventually move into its current home. Turano, a Westerly native, recounts the years that followed like a true Rhode Islander, complete with “used to be’s” and “when it was’s.” He describes artisan stalls that merged into single shops and maps out the many iterations that preceded the Small Axe Productions Cafe. Some businesses have come and gone, while others have stuck around for the long haul, including the General Store, which is filled with treasures “for the funky soul” and Axiom, known for its vintage eyeglass frames and work from local artists.

Then, about ten years ago, Bankel decided he was ready to sell. 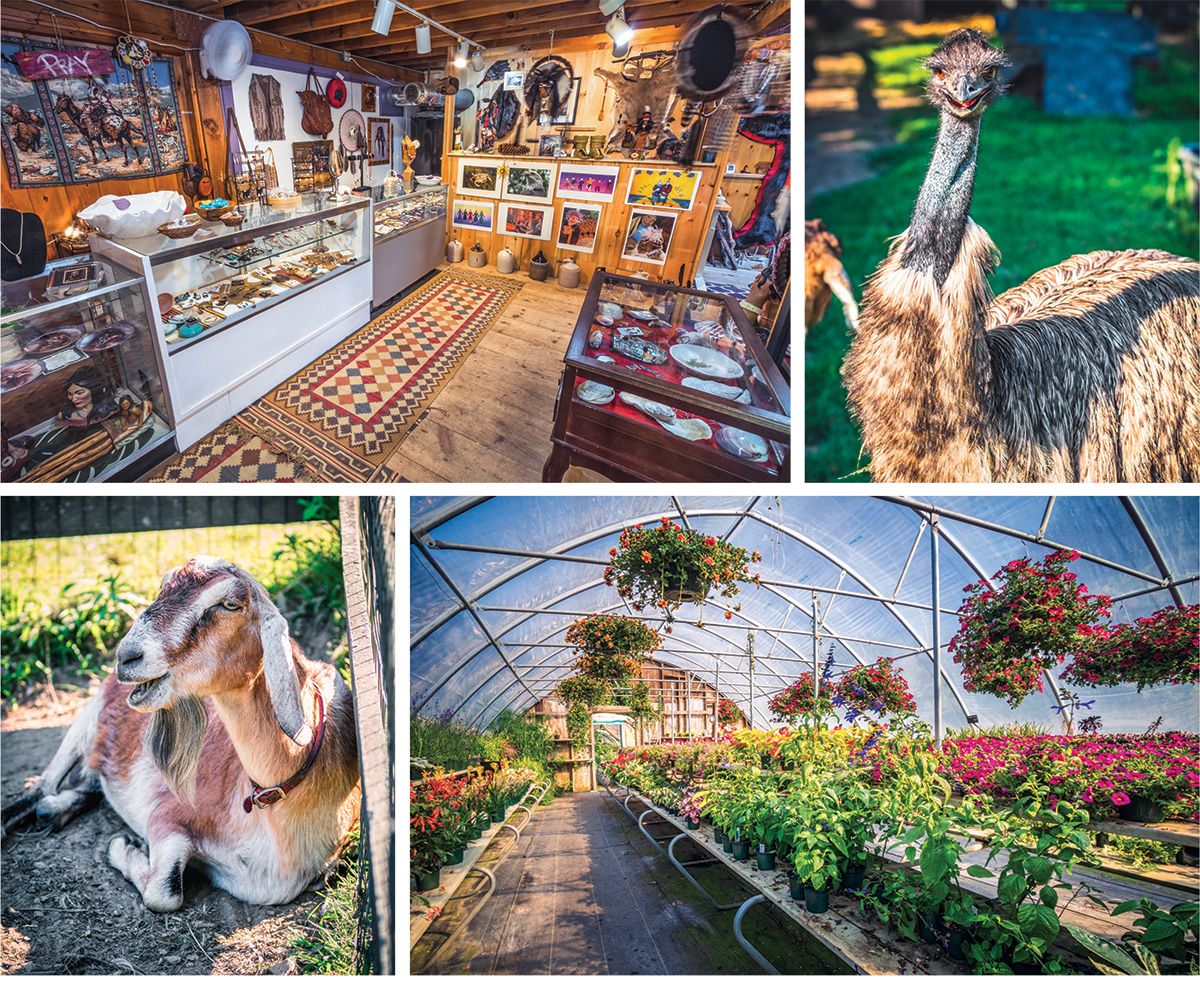 Top, left to right: The Purple Shell, the Fantastic Umbrella Factory’s newest tenant, is an authentic Eastern Native trading post that offers everything from
wampum jewelry to dreamcatchers to basketry; one of the factory’s emus strikes a pose. Bottom, left to right: One of the factory’s goats takes a rest in the shade;
the Umbrella Factory Gardens and their greenhouses boast a bounty of beautiful blooms for sale. Photography by Wolf Matthewson.

“[The Factory] was on the market for a long time and he couldn’t get anybody to buy it,” Turano recalls. “So, he said, ‘Just make me an offer and we’ll see what we can do.’ I did and he ended up taking it… Now I’m stuck with it!”

A nearby rooster lets out a bloodcurdling cry, as if chastising Turano for being so self-deprecating. He actually has quite the heartwarming family operation going for him.

“My and my wife’s names are on the mortgages, but my daughter and son are the main cogs in the place now,” he says. “My daughter pretty much runs our shop and my son takes care of all of the grounds besides the gardens — my wife takes care of those.”

The Turanos continue what Bankel started: tending to the natural beauty of the nearly five-acre Charlestown property and also giving homes to unique tenants — some of which include furry and feathery friends.

After our chat, multiple chickens weave through my legs as I pass a Secret Garden-reminiscent water fountain on my way to the animal pens. There, I pet a sweet goat named Melanie and witness an emu walk away in a huff after a child misguidedly calls out, “over here, ostrich!” The comely bamboo forest beyond offers welcome shelter from the brutal sun, and while the greenhouses later have the opposite effect, they allow me to give into my millennial nature and snap a few Instagram-worthy photos amongst the blooms. I pop into some of the charming-as-ever shops and pick up a birthday bracelet for a friend at the General Store and a T-shirt for me from Block Print Graphics. I end up at the Purple Shell, the newest addition to the Umbrella Factory gang. Turns out, the owner, Allen Hazard, is the man with the Stetson.

“David is the one who brought me here,” Hazard says when I ask about his new digs. “He visited my first store and bugged me a couple of times to move here — he thought it would be a good mix.”

And a good mix it is: An authentic Eastern Native trading post, the Purple Shell fits right in with the eclectic, local artisan vibes of the Fantastic Umbrella Factory. Hazard and his sister, both Narragansett descendants, grew up watching their mom and aunts work with wampumpeag (wampum) and poquauhock (quahog) shells and decided that they wanted to get in on the craft, too. The deep purple hue of the latter shell inspired the name of the shop, and a diverse array of shell creations now fill its glass display cases. The inventory (made by the Hazards and other natives from the area) also includes dreamcatchers, paintings, drums, baskets, face masks, pottery, loom beadwork and more.

“If you really wanted to look at everything, it would take an hour. In fact, in the other store, one lady once plopped down on the floor in our wampum room. She’s got her legs crossed and she’s staring at one of the cases. A couple of minutes later, she’s changed her direction. Eventually, she made a complete circle on the floor. She said there was too much to take in,” he says with a smile. “It was the funniest thing I’d ever seen, but also nice to see someone really appreciate everything we have.”

On my way out, I realize that today, I feel like that lady. Sadly, I don’t have the time to take in everything that this oasis has to offer as thoroughly, but that’s okay: the Fantastic Umbrella Factory has been around for more than fifty years, and I won’t be surprised if it’s around for fifty more. As I wipe the sweat from my brow yet again, I decide to take up Turano’s advice to come back during cooler months — though their hours are limited to weekends in January and February, the factory is as welcoming as ever to visitors. We may never know what happened to the umbrellas, but the ‘fantastic’ part comes easy, all year round. 4820 Old Post Rd., Charlestown, 364-1060, fantasticumbrellafactory.com.