'Hocus Pocus 2' put a spell on Chase Farm in Lincoln last fall and now the farm is ready to share the magic with the rest of the state on Saturday, October 1.

On the very grounds where a recreation of Salem Village stood during the filming of Hocus Pocus 2, BeWitched and Bedazzled: A Magical Fall Festival invites autumn and Sanderson sister lovers alike to celebrate the best of spooky season. Starting at 11 a.m. on Saturday, October 1, attendees can look forward to everything from hayrides through the picturesque hills and personal psychic readings to homemade costume contests and the appearance of more than seventy-five artisans and vendors selling goods like handmade soaps, jewelry, herbal products, seasonal décor and more. Painters will also be encouraged to capture various scenes throughout the day. Their work will then be entered into a competition and displayed for all to admire.

The festival has quite a few more tricks up its sleeve, too, including ‘witch dance’ performances and lessons, magical illusions by Circus Dynamics, Salem Witch Trials recreations by Reverie Theater Company members, historical and spooky accounts by international storyteller Len Cabral, witchcraft myth dispellings by a modern-day witch, wand making workshops and Salem Village backdrop photo ops complete with vacuum, mop and broom props. On the treat side of things, plenty of food trucks and snacks will be on hand to ensure no one has to resort to the Sanderson sisters’ antics of feeding on children’s souls.

In a direct nod to the Hocus Pocus 2 set,  special guest Steven Feinberg of the Rhode Island Film and TV Office will stop by to talk about how Disney came to choose Rhode Island for their Blockbuster movie (if you want to learn even more about this once-in-a-lifetime development, be sure to pick up our October issue!).

But how did the festival itself come about? It all starts with Kathy Hartley, the director of Hearthside House Museum and Great Road Heritage Campus and a descendant of the Chase (as in Chase Farm) family. She played a large part in bringing Chase Farm to Disney’s attention, and was on site daily as the village was being built, filmed, and eventually taken down. It was this intimate look into the movie making process that sparked the idea.

“One day, I was talking to the production guys, and I said, ‘You know, I should do something when this movie comes out… It would be nice to have a showing here,’” Hartley recalls. “And they said, ‘Yeah, you should, it would be really neat because this is where it all took place.’ So, that’s when the wheels started to turn.”

By January of this year, she had made up her mind to turn it into a festival.

“And not just throw a big party, but to use it as an opportunity to teach history, because Salem Village and the Salem Witch trials were all real and they were nearby,” she explains. “People seem to forget; they just know the Hocus Pocus story. So, I thought we can still have people here having fun but they’re going to learn while they have fun.”

She thought it would make for an exciting lead up to the film’s release, which was originally set for Halloween. But then the premiere on Disney+ was pushed up to September 30, just one day before the festival. Hartley considered showing the sequel at the event, but Disney, like most subscription services, strictly forbids public streaming of its content. Instead, a screening of the original film will still occur on the grounds the night of the festival, but it will be billed as a separate event (with additional tickets required). It will kick off at 6:30 p.m. with a live performance of the Salem Sisters act prior to the movie.

And though it was jarring at first, Hocus Pocus 2’s date change has done nothing to hamper the excitement for fall event.

Not surprising, considering the number of people who came to visit the set both during and after filming.

“People came from all over the country. I was meeting people every day. I remember standing here and this woman showed up and she was like, ‘Oh, can’t I get closer to the set?’ And I would help out the security guards and say, ‘No, sorry, you can’t, you have to stay back here,’” Hartley recalls. “And she goes, ‘Well, I just got in and this is my birthday present to myself.’ She had driven in from Chicago. Just to see the set!” 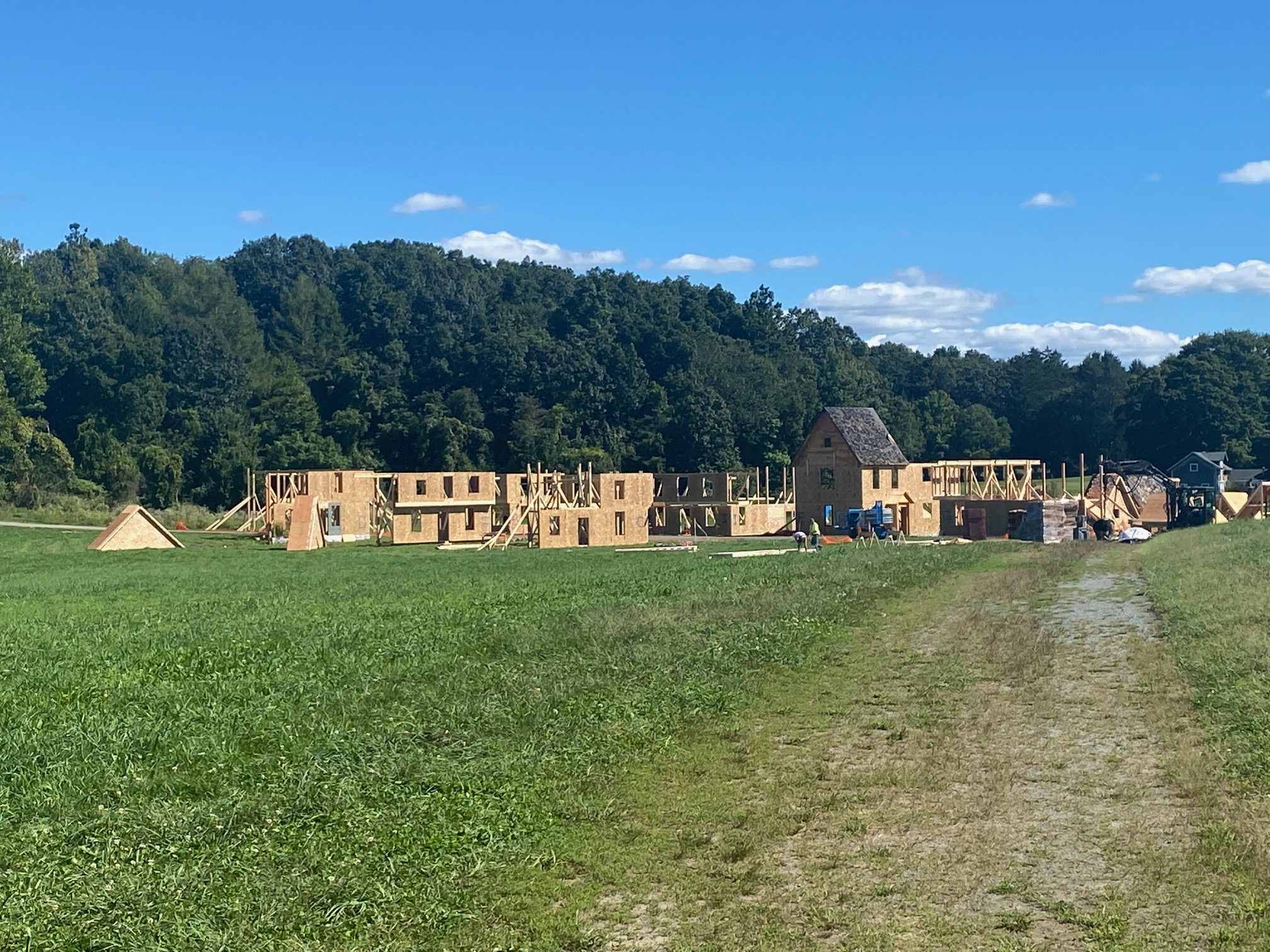 Yet somewhat unexpectedly, the visits turned into an asset for Hartley. She recalls one day in particular as a ‘magical day on Great Road.’

“There was a full moon that day, and we were in the process of installing an eighteenth-century canon that had been borrowed by the Rhode Island Historical Society in the nineties and finally returned to Hearthside,” she explains. “This guy from New Bedford was on his way to see the Hocus Pocus set saw all the commotion and decided to stop and ask what was happening. When I told him, he said, ‘Oh, I really like history and canons.’ He stayed for a bit to watch and I told him about our museums and he said he’d have to come back sometime.”

He was about to pull away, but then he stopped again. As it turns out, he was an artist and he wanted to sketch the canon.

“Now, twenty minutes before I had been meeting with the publisher of Men at Arms and asking if he knew of any illustrators. I had been looking for someone for years to create a mural for us,” Hartley says. “Now all of a sudden I have this guy sketching the canon in our driveway. I asked to see his sketch pad and when he showed it to me, I said, ‘Oh my god, you nailed it.’”

She hired Jason Eckhardt on the spot. While he was working on the mural project, Hartley had started to plan BeWitched and BeDazzled. A big Hocus Pocus fan, he was thrilled when he learned she also needed someone to create a logo for the event.

“I told him it needed to have the hills of Chase Farm and the sycamore tree and the name. He said let work on this and three days later he gets back to me with [the finished logo]. It was perfect — it even had the full moon we met under,” she says.

And that wasn’t the only auspicious meeting she had beneath the moon that afternoon. After the canon was installed, Hartley went to Chase Farm for her daily check in and was intercepted by a woman named Kimberly Keene in the parking lot — another Hocus Pocus enthusiast.

“Her daughter had been an extra for filming in Newport and they wanted to get a closer look at the set here. I give her the spiel and she’s very friendly so we got to talking. I tell her about Hearthside and the work we do and ten minutes in, she says, ‘Do you take volunteers?’”

Not only did Keene become a regular volunteer for Hearthside, but Hartley ended up bringing her on board for the event.

“She’s now in charge — this is her event. She has had a grand vision for it from the start and has played an important role in its creation and energy. She’s living and breathing BeWitched and BeDazzled twenty-four hours a day,” Hartley says.

Which doesn’t sound like too bad of a gig when you think about all the exciting things the festival has in store. 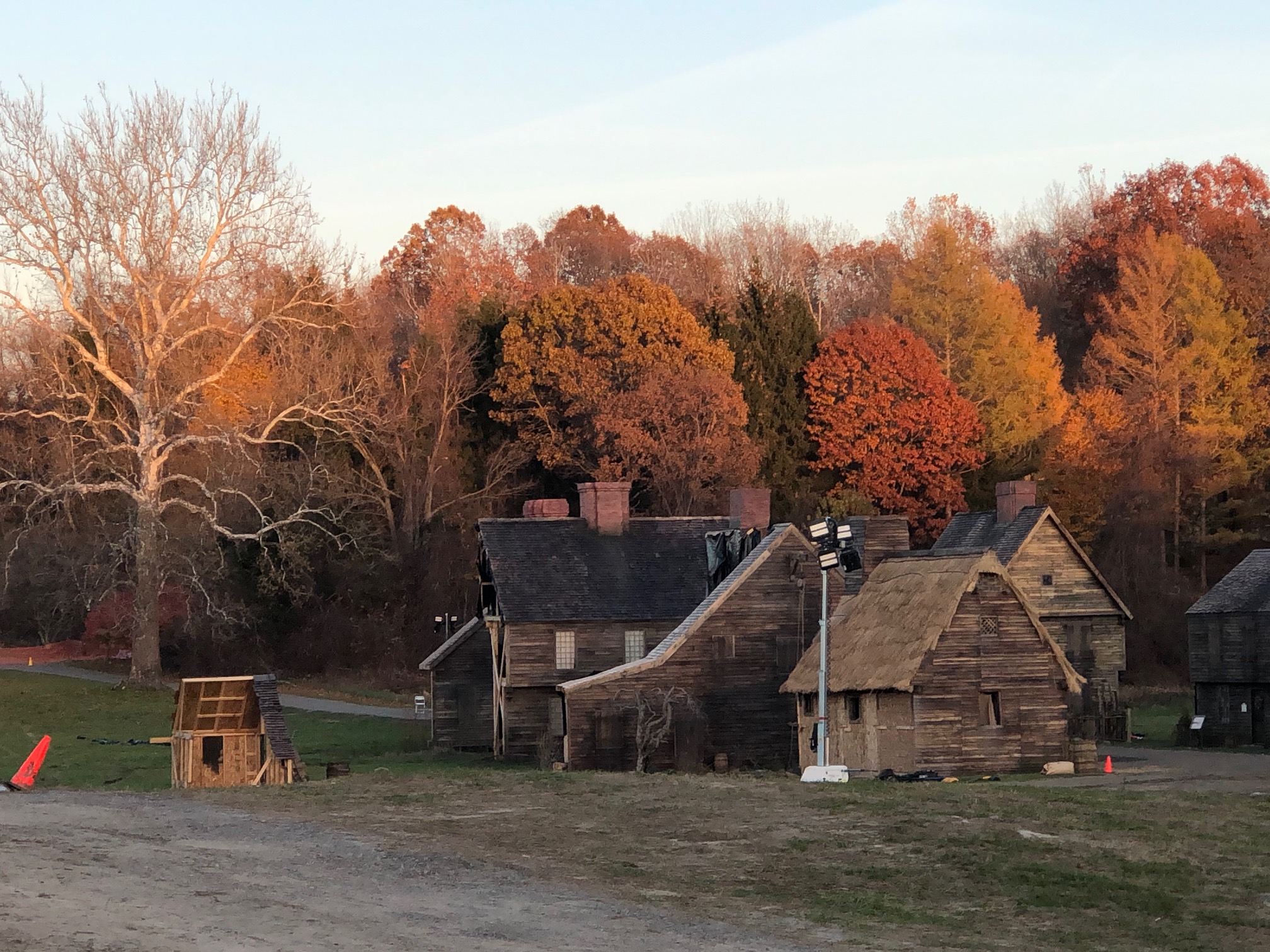 “This was taken the day I met Kim. The movie set looked sad as it was being readied to be torn down. But, the sun was setting and we marveled at how the light was hitting the sycamore tree like a spotlight, and the color on the trees added to the feeling that the village could have been in Salem,” says Hartley. “Once the sun set, the full moon rose. We both commented at that moment that it must have been meant to be that we met on that special day, November 18th, three months to the day that the production company began building the movie set at Chase Farm.” Photo courtesy of Kathy Hartley.

“We are very excited. Chase Farm has kind of been a best kept secret over the years. Now it’s been put on the map because of the movie, so we can’t let our foot off the gas. It will always be the place where Hocus Pocus 2 was filmed,” she says. “We’re hoping it will be a phenomenal success this year and then we can turn it into an annual event to celebrate.”

Chase Farm is home to eighty-five acres, so it’s important to note that the festival will take place at the top of the hill in the large meadow to the left of the pond, while the movie night will be held in the concert bowl area that night. While the parking lot and some of the fields will be available for parking, satellite parking will also be set up at CCRI’s Lincoln campus with shuttle buses available to bring ticket holders to Chase Farm.

Tickets are only available through Hearthside’s website (find a direct link here) and not at the gate. General admission for the festival, which will be held from 11 a.m. to 4 p.m., is $13 for all ages while admission to the Hocus Pocus screening, which will last from 6:30 to 8:30 p.m., is $7 each. Combo tickets are also available for both the festival and the movie for $20.  All proceeds will benefit the mission of the Friends of Hearthside to preserve, protect, interpret and promote the history of the Great Road Heritage Campus Sites.