KITE Architects took a small footprint and created a bold family home with an incredible view.

Shipshape
Coastal New England architecture shares a common vernacular. Much like our loose interpretation of the R-consonant, the residences along Rhode Island’s shores speak of this region through familiar dialectal materials and forms. While tradition is comfortable and homey and charming, nonconformity can be so very interesting. 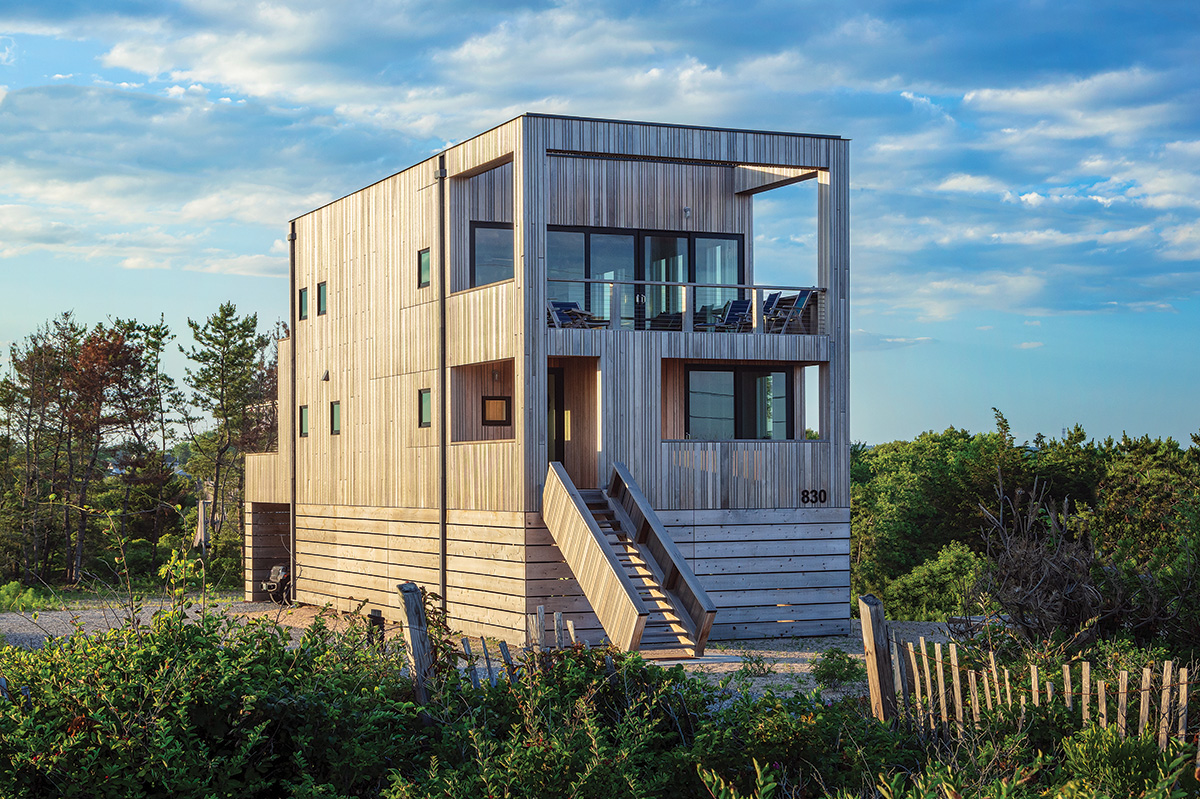 Adroitly situated on a narrow plot in Charlestown, this beach house at first glance looks like a striking outlier. Its boxy shape and juxtaposed vertical and horizontal lines are decidedly modern but upon closer examination, this house’s language is not foreign. The siding, while untraditional, is colloquial cedar, and the house itself is fashioned after a form synonymous with the state it calls home: a ship.

“The horizontal boards at the base are reminiscent of a rustication level,” says principal Albert Garcia of KITE Architects, who designed the house with KITE associate Kyle Bamrick. “The ship metaphor draws its cues on the bottom from the planking of the hull. The sleeping berths are on the first level and then the promenade deck overlooks the water on the upper level.”

Even the stairs on the ocean-facing side are designed to look like a gangplank. “We had fun with the language of that,” Garcia says. 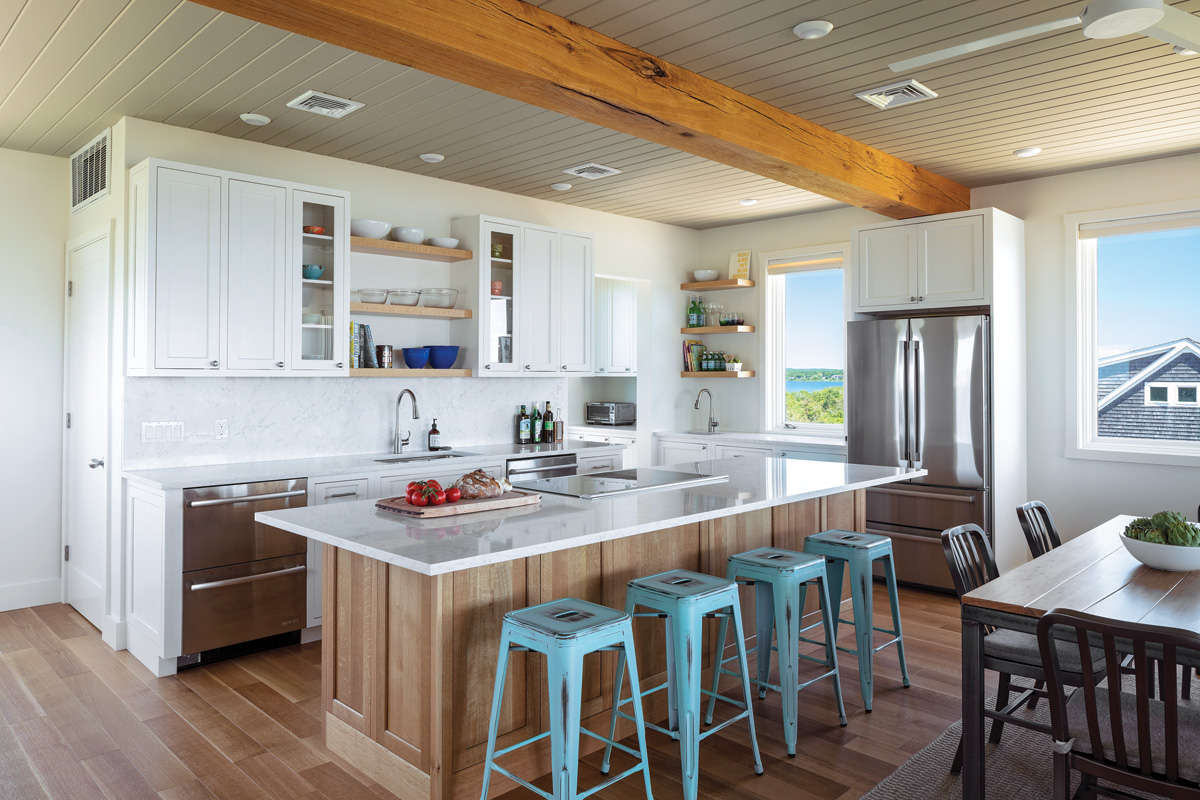 Working Kitchen
Locating the shared common areas, such as the kitchen, dining and living rooms, on the uppermost level maximizes the near 360-degree water views (while the Atlantic is the main attraction, Green Hill and Ninigret ponds are also in sight). 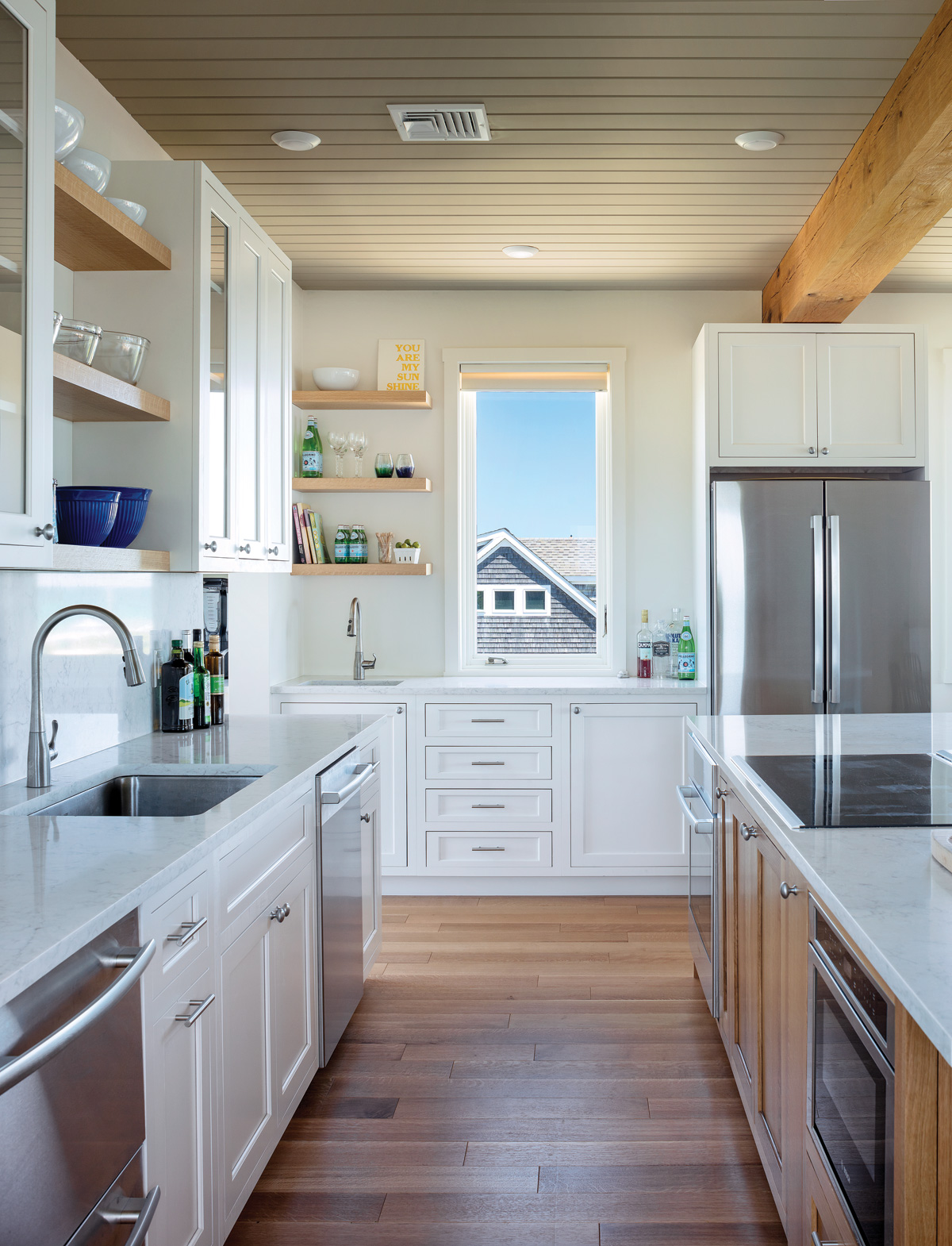 The interior finishings are more expected than the facade. Reclaimed timber beams and a shiplap ceiling carry the ship metaphor inside the open and airy plan. Built primarily as a summer residence, the kitchen is simple and efficient: no-fuss Viatera quartz counters serve both as counters and backsplash. A bonus prep sink next to the fridge is convenient for hosts and guests alike when there’s a full house. 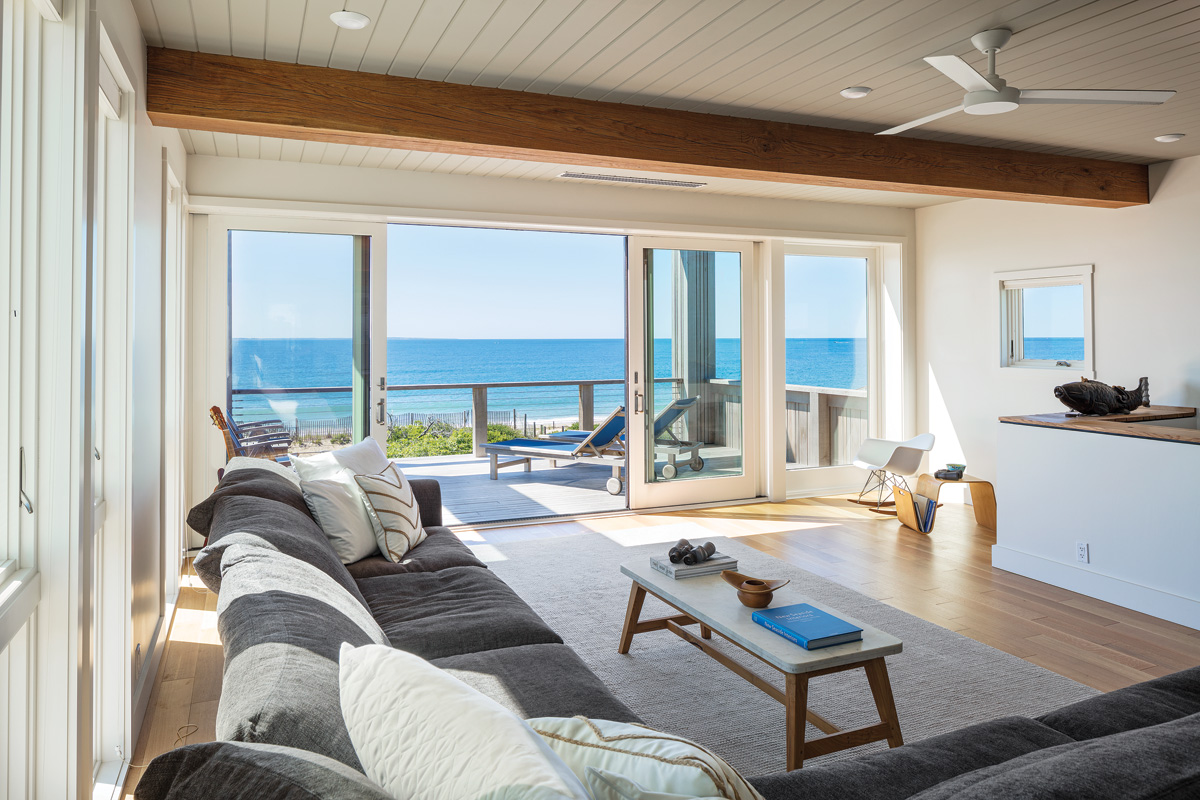 A virtual wall of windows provides a sweeping view of the Atlantic. A sliding door opens to the upstairs porch, which is a recess carved from the main volume. Photography by Warren Jagger

Design Goals
“With any residential project, it really is very much a collaboration because you’re trying to understand how someone lives, how the family uses the space,” says Garcia. The history of collaboration between KITE and this client stretches for nearly a decade. “We have worked with this owner on a number of different projects in Providence and Massachusetts, but he was looking to build a house on the shore.”

The location is what attracted the client to this property. There was a single-story bungalow on the site, but it was an older home that didn’t meet modern coastal standards for storm surge and wind resistance. The clients wanted to replace it with a resilient, updated beachfront home. The goal, says Garcia, was to create a fun summer retreat, a “collectible space where family and friends could come and stay.” 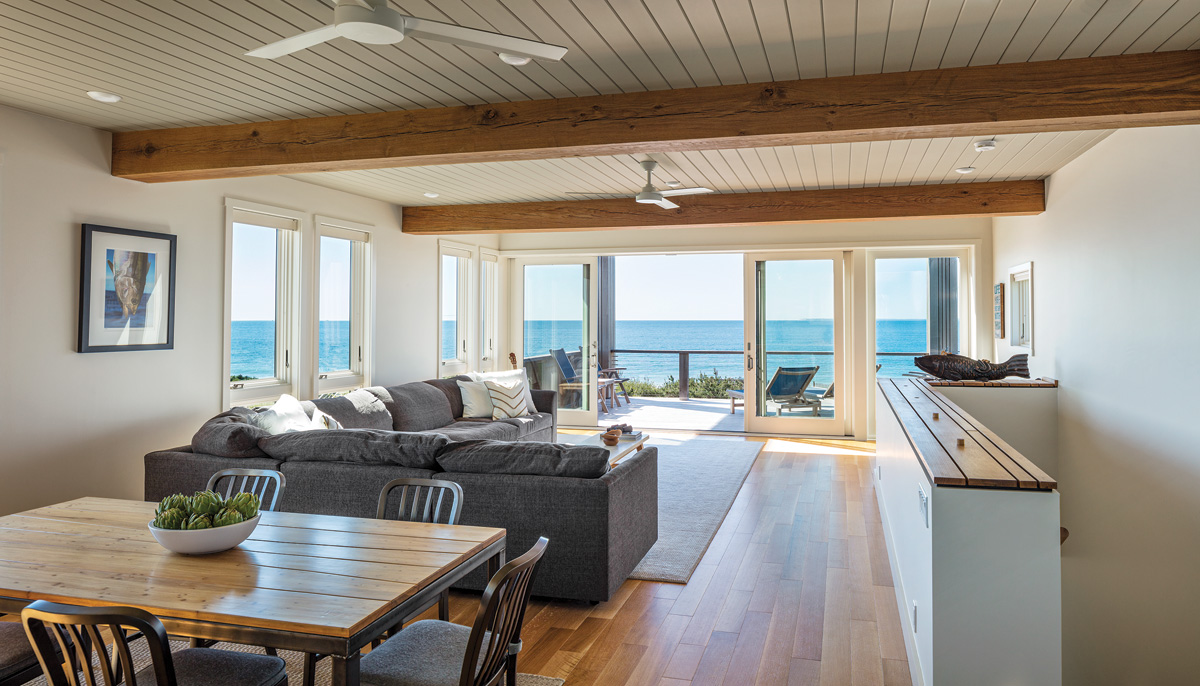 While beautiful, the lot posed several design challenges. First, the site is narrow and long with relatively narrow frontage, and second, securing privacy from the adjacent road and neighboring properties would be difficult. “Some of the design features are really aimed at maximizing the exposure and the views toward the water and also minimizing and screening views toward the adjacent properties,” Garcia says.

Form and Function
The client, an industrial designer, was equally concerned with form and function.

The bedrooms — a master and two smaller rooms — are located on the first floor. The master bedroom faces the water on the oceanside and features a sliding door to the front lower deck. The smaller bedrooms also have ocean views thanks to unique, triangular-shaped turret-like windows that pivot out.

“The geometry of that gives a little peak of the ocean while you’re lying in bed deciding whether or not to get up and get out,” Garcia says. The design not only provides views of the water, it screens the view toward neighboring properties. 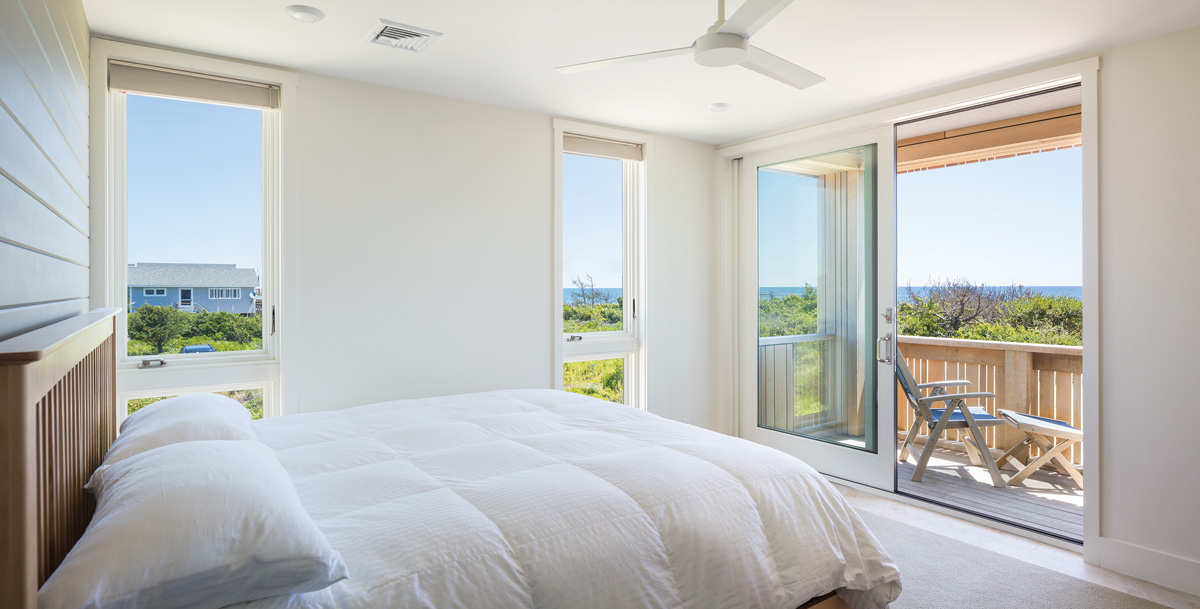 The quilt-like exterior design was achieved by randomly patterning three varying board widths and separating each with a quarter-inch gap. “The nice thing about the random patterning and spacing of the boards was that, by design, you could land each board on a window perfectly and absorb some of the dimension shifts,” says Garcia, who credits project contractor Newport Renewables with executing the design.

“This was a nice marriage of an owner with an interest in contemporary design and a builder that was really focused on high craftsmanship.”